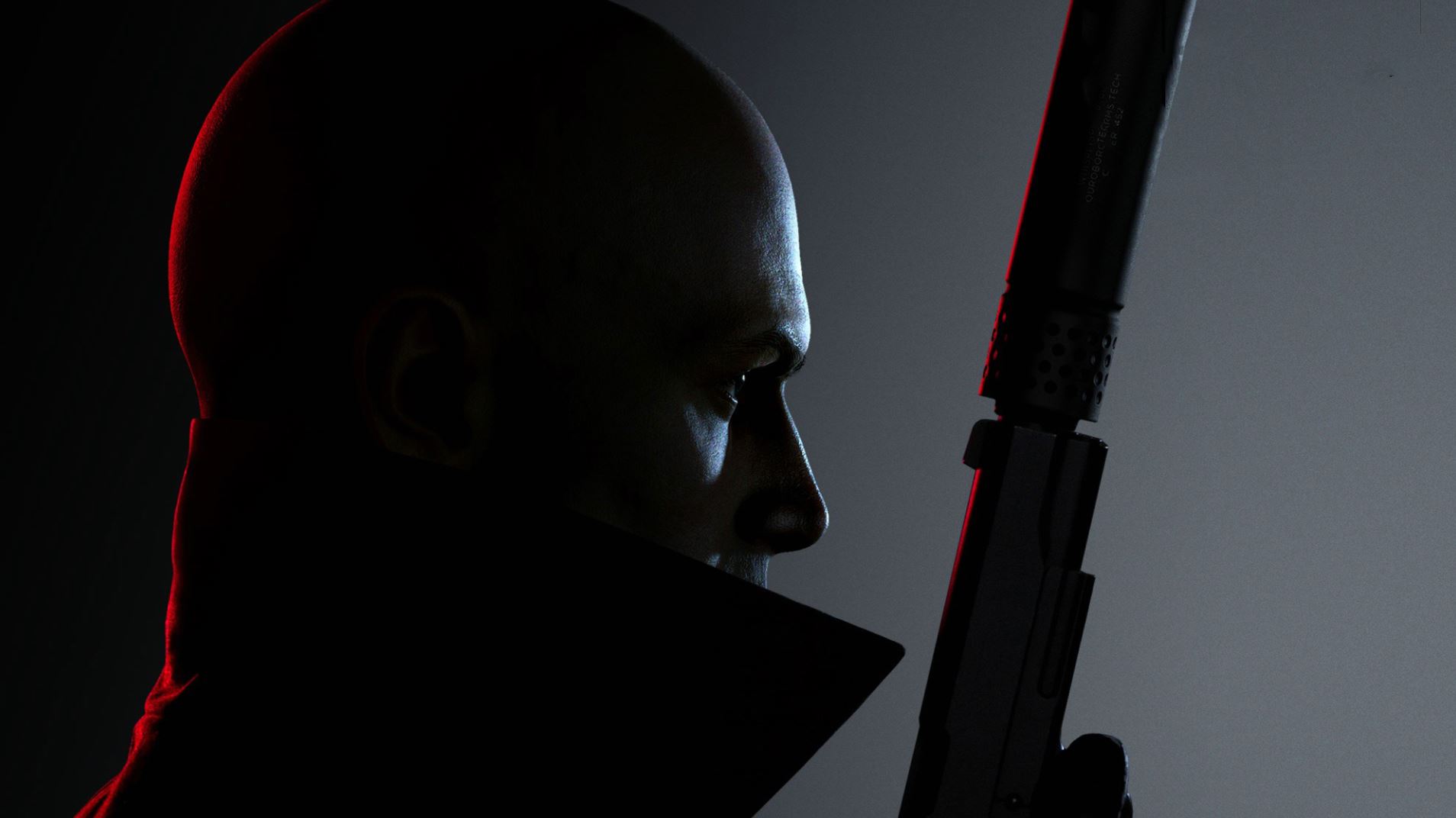 Hitman 3 PS5 Review – IO Interactive caps off its modern Hitman trilogy with an entry that draws from the entire series’ past, whilst giving a significant nod to the developer’s next big project.

The stakes have been raised for this trilogy-capper. With Agent 47 now targeting the highest members of a clandestine organization. This is the last big hurrah (for now at least) of IO’s successful revitalization of Hitman, and its first appearance on PS5, so it’s important to make a strong opening statement.

A Trilogy Brought Together

That opening statement is made with the bald-headed killer kicking off Hitman 3 by parachuting into Dubai to infiltrate a lavish skyscraper that towers over every other building in the area. After carefully making his way around the outside of this gargantuan structure, he utilizes his latest gadget, a hacking camera, to open a maintenance access panel and sneak in undetected.

Upon reaching a storage room, he walks through the curtain into the reception area it the camera covers, and when it falls away again, 47 has changed out of his skydiving gear and into a smart suit as a fittingly Bond-esque orchestral swell plays.

It’s a fine way to show where IO Interactive is at this point in time. After a confusing structuring of Hitman 2016, and uncertainty surrounding the company after it was ditched by publisher Square Enix, IO could easily have become another sorry statistic in the realm of dead video game developers.

Instead, the Swedish developer powered on with Hitman 2 and refined the already great mechanics of Hitman 2016 to create what was perhaps its most defining game. The World of Assassination trilogy changed the fate and standing of IO, and undoubtedly landed it the dream job of creating a 007 game. 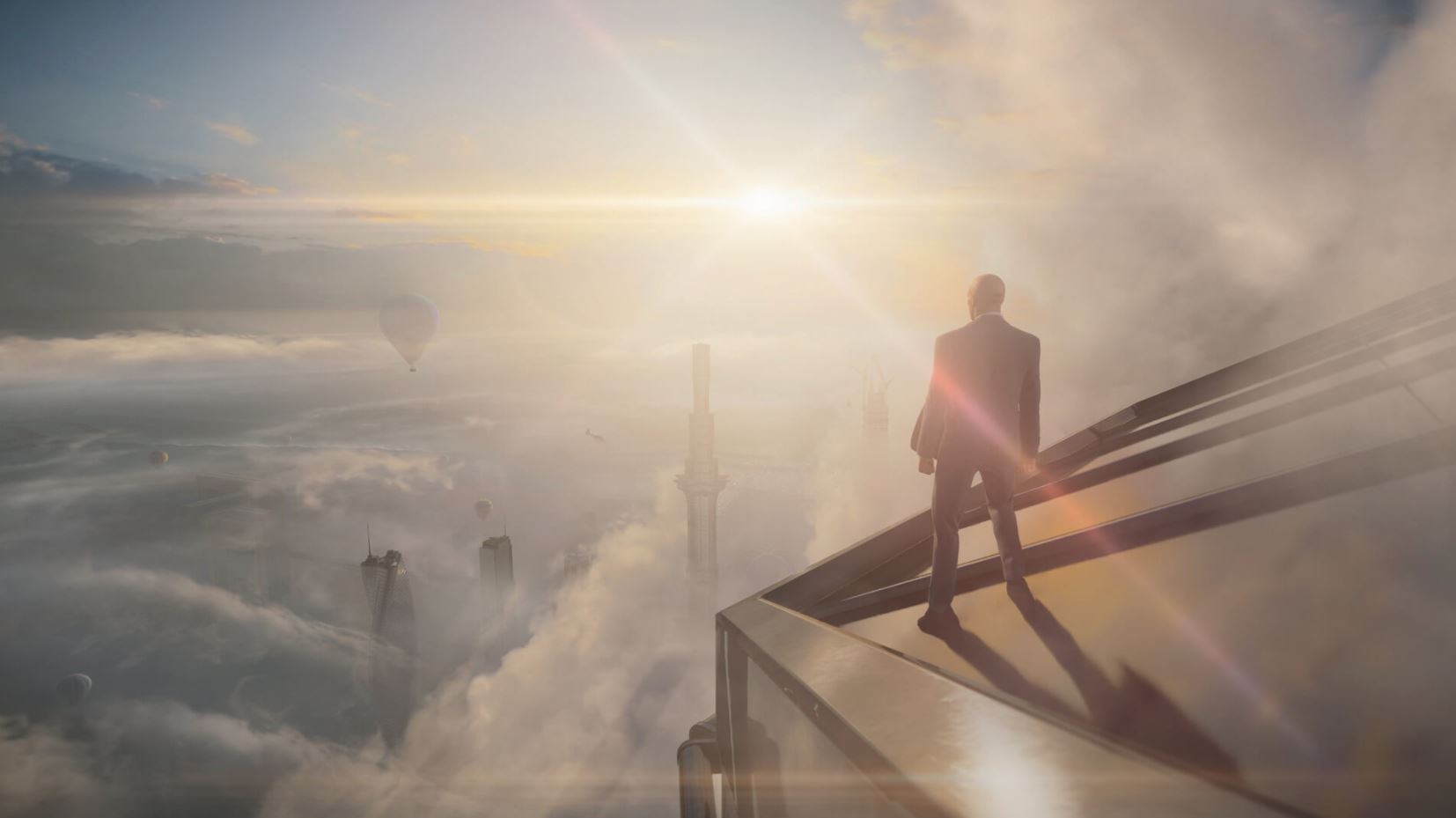 If It Ain’t Broke, Don’t Fix It

As with Hitman 2, Hitman 3 keeps the visual style and basic ruleset of Hitman 2016, with an overarching story, and a few new tweaks and improvements to how the game plays (also adding those improvements to the previous games in the process).

In that respect, the trilogy tag is perfectly suited, but each entry has six individual ‘episodes’ (the one constant kept over from the original episodic model). These episodes are self-contained levels, mini-sandboxes that have their own extra rules and quirks to crack.

The beauty of the levels is discovering just how many options they offer to accomplish your task (which is mostly ‘kill these people’, but also requires you to pick up some vital information or an important item). Agent 47 can acquire disguises, keys and keycards to get into off-limits areas, but he can also simply sneak in an open window, pry open a locked door, or blast his way in (which is not really the point of Hitman, but it’s always nice to have that option).

Depending on how much of a challenge you prefer, the game will either let you figure it out on your own, exploring every nook and cranny, listening in on NPC conversations for clues, and trying your luck. If that’s too much hassle, the game does allow for the player to be directed to potential opportunities for a perfect kill. Either way, experimenting in different runs through a level unlocks more places to start from, new gadgets to play with, and better knowledge of the level’s inner-workings. 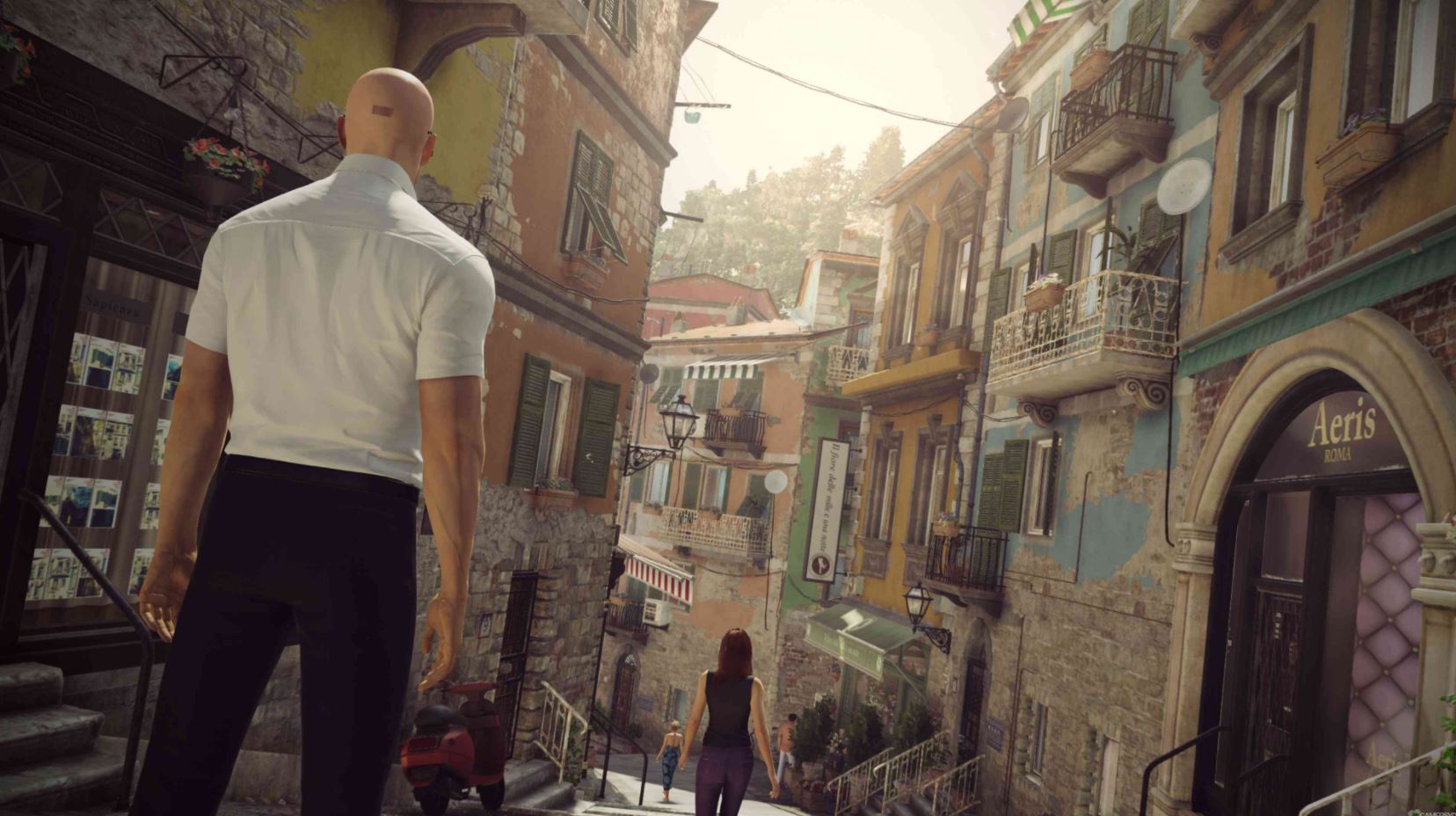 Completing the six episodes is relatively quick and easy, but Hitman’s combination of immersive sim tomfoolery with sandbox murder puzzles is what makes each so immensely replayable. There are satisfyingly calculated assassinations where it looks entirely like an accident, and then there are times you just send a target plummeting off a roof by lobbing an expertly timed breakfast muffin at their head.

Despite its story’s stoic approach and the fact that your job is to be a professional murderer, Hitman 3 is still very much a master of dark slapstick comedy. I enjoy the game just as much when I’m clobbering guards with a wet floor sign as I do when coolly slipping past security to close in on my prey. The important thing is that IO designed its levels with this in mind. After all, nobody puts throwable bananas in a game without daring you to find a way to make amusing use of them.

As good as Hitman 2’s levels were, they still fell broadly into the same kind of structure as the first game. Hitman 3 plays with that structure, not only feeding narrative consequences from one stage to the next, and offering up even more varied runs from A to B, but also offering interesting tweaks such as persistent shortcuts that, once discovered, permanently open up new routes around areas, giving you a greater amount of options to approach your mission from.

The early standout showcase of these changes is found in the second episode. It takes place in a sprawling country mansion in Dartmoor, England. Before you even get in the front door, a murder has occurred and a Poirot-esque super sleuth has arrived to solve the case.

So while you’re trying to commit a murder yourself in the presence of a detective, you also have the opportunity to take him out and solve the murder yourself. It’s absolutely worth doing too because it shows off the complexity of the mansion by giving you the freedom to explore at your leisure, discovering the aforementioned secret places along the way. 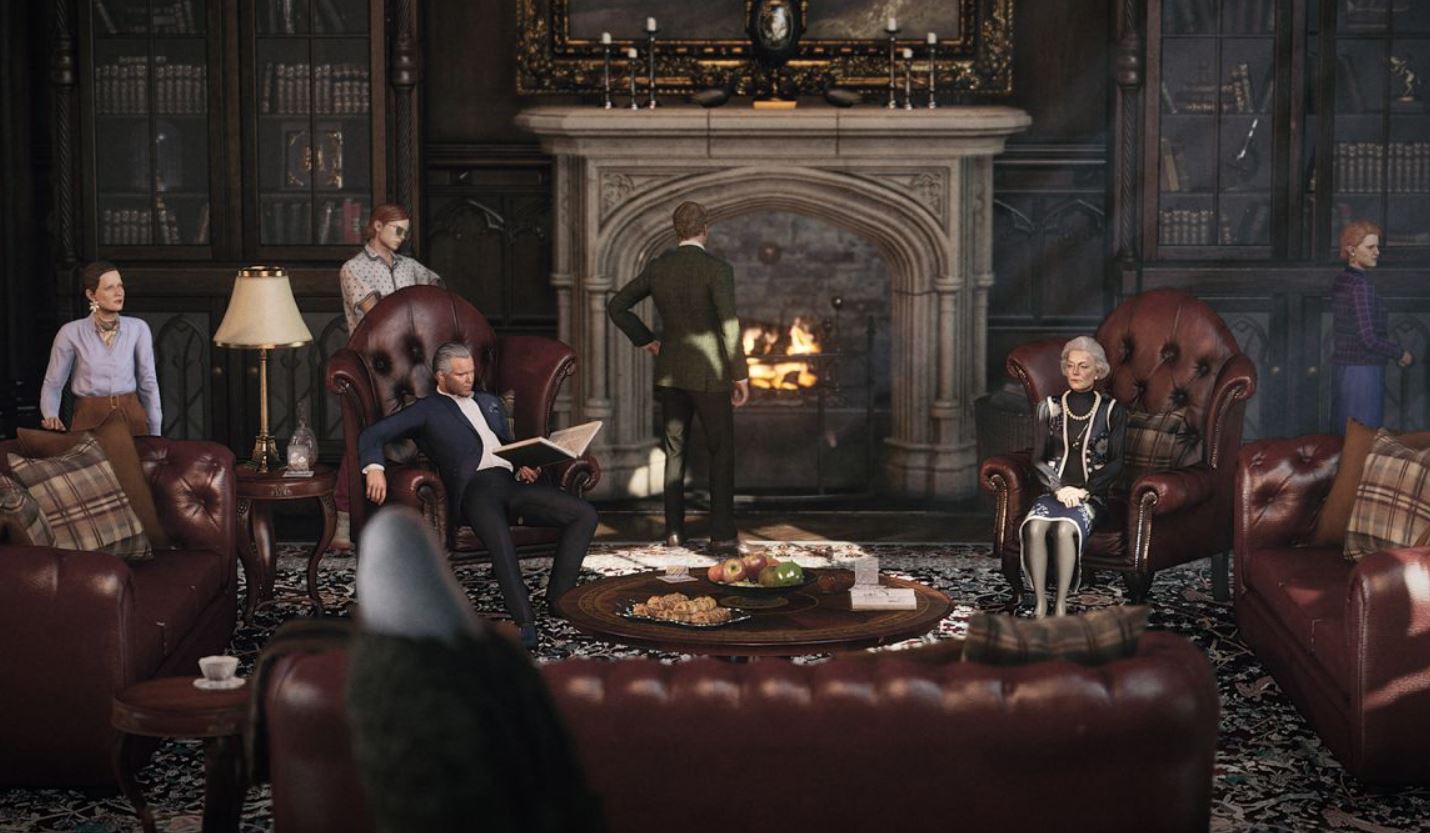 I’m still not sure if it’s my favourite of the six new stages, but it’s the most ambitious in terms of blending a contained story into the setting. There’s a fair bit of familiarity to the rest that is both warmly welcome and a little underwhelming at times.

Dubai feels like a melting pot of every Hitman level to feature a tall building or/and a hotel, but it’s an undeniably gorgeous opener. The trip to Berlin might be my favourite. It has an air of Hitman Absolution meets Contracts to it, with the tables turned on 47 somewhat, testing the skillset of the master assassin in a different way.

China’s neon and rain-soaked level bring another spin on the now-classic Sapienza formula of a public place with an underground secret. I’ll be a little more discreet on the final two levels, but I will say they are perhaps the clearest examples in this trilogy of IO Interactive’s desire to make a James Bond game. The finale offers up the biggest shift in structure of the entire trilogy, with a remarkable blend of concentrated freedom.

The underwhelming part is largely down to having too much of a good thing. I’ve put so many hours into the Hitman games, played every variant on established maps I can, and drank in the wonderously decadent bonus missions IO produced. Even with the changes in Hitman 3, which are perhaps more significant than any changes in the previous games, it’s hard not to have a slight feeling of “been there, done that” at times. It is to IO’s credit that it’s not a feeling that overwhelms because it has somehow kept the formula quite fresh without divulging from it massively. 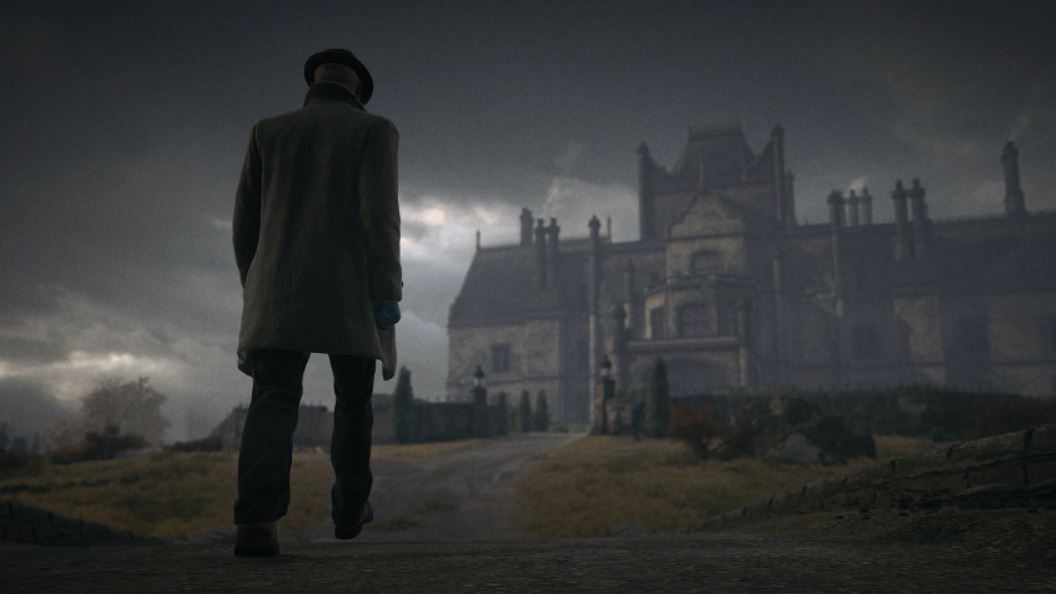 My other main gripe remains the story. The overall narrative is perfectly fine in itself, but it’s not been consistently well-represented. The game’s natural jump in visual quality on PS5 is offset by cutscenes that somehow look poor by comparison. They are at least an improvement on the storybook stills used in Hitman 2 (an understandable cutback given the precarious nature of IO’s future at the time), but it continues to undermine the story being told by making it feel like a tacked-on part of the package.

Hitman 3 does its best-storytelling outside of those cutscenes, especially when using the in-game engine instead. In an ideal world, Hitman’s entire story would be better connected than it ended up being. It’s thankfully not the dealbreaker it might have been simply because Hitman is pretty much built upon its gameplay and the freedom in how it plays around with a set of rules. The story is very much secondary to that, which is unfortunate, but not getting in the way of what works.

So yes, Hitman 3 is undoubtedly a superb follow-up to a great game, a largely confident showcase of everything a developer has learned over a rocky few years. Outside that, the other major changes come from new hardware. The PS5 allows much faster loading times, more so than the PS4 version of Hitman 2 playing on this console. This is a boon for Hitman 3, as it helps encourage experimentation when you can jump back in seconds after a bit of trial and error.

Of course, it also looks and runs better than ever. The detail in each meticulously-crafted map is deeper and more distinct. I’d like to think the extra power played a part in allowing for more complex, labyrinthine levels such as the one in China. I checked out that level out on the PS4 version, it does noticeably struggle in places, whereas the PS5 version runs the same thing like water from a tap.

The use of the DualSense is yet another instance of simple, effective, and a little disappointing. Adaptive triggers do their thing with pressure-sensitive trigger pulling and item lobbing, but the haptic feedback doesn’t get all that much of a showing. 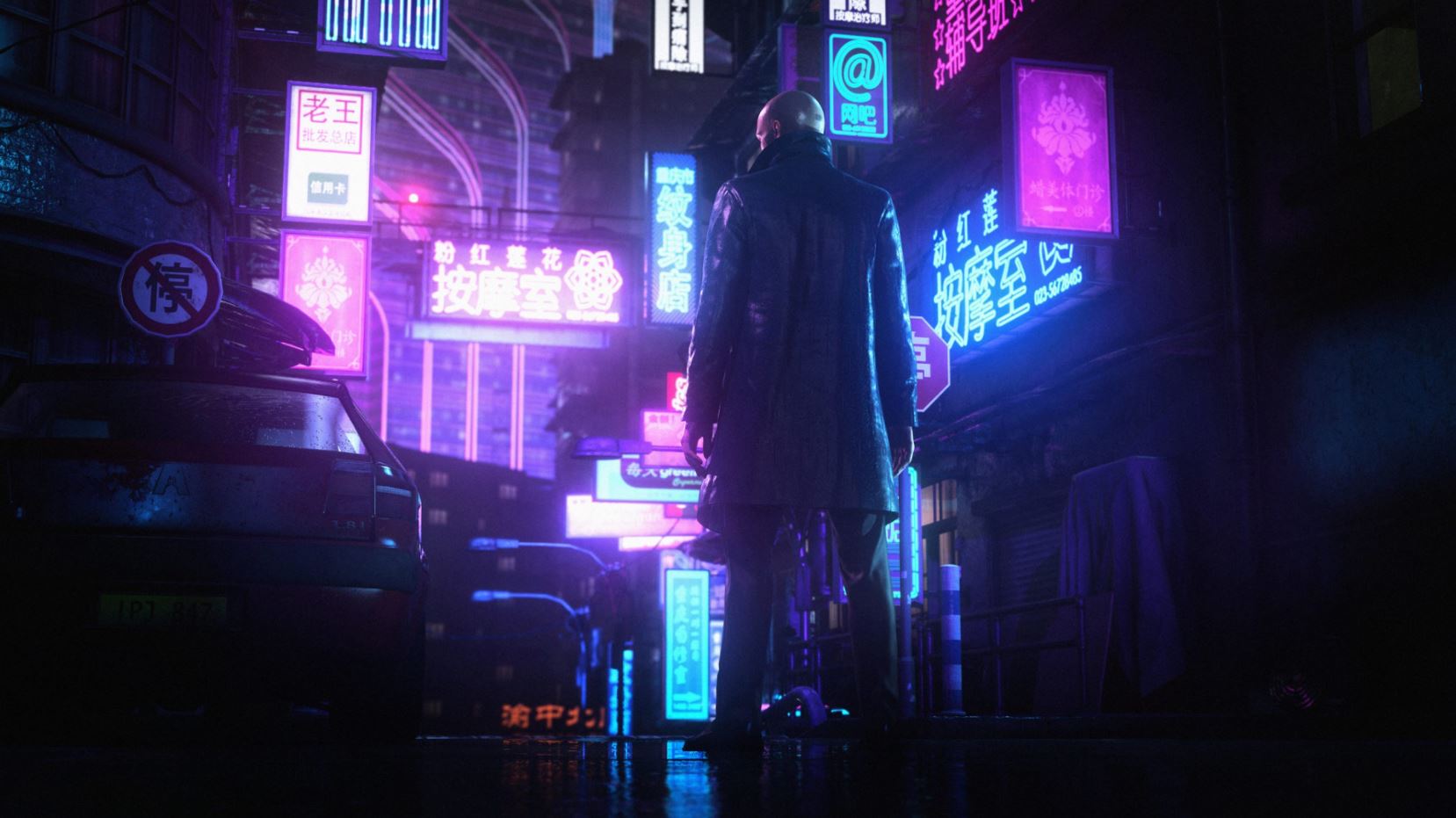 This is now the ultimate version of Hitman. Players with the first two games will be getting them all sparkly and new-looking in line with the PS5 version of Hitman 3. There will be more of the escalation missions for the new maps (basically remixed alternate targets where each run adds a new wrinkle to the mission completion requirements), Elusive Targets (time-limited one-shot assassinations) and the ability to make your own contracts (another fine way of using Hitman’s expressive, creative murder boxes).

Sadly there is not any new Sniper Assassin missions yet, and the 1v1 multiplayer of Hitman 2 has been abandoned, so it undoubtedly feels like a lighter package, but there is now VR support for all Hitman games (you’ll need to switch to the PS4 version), which adds an interesting new perspective on the design of the game, and means you can go for a nice immersive walk around sunny Sapienza for your holidays this year, flinging expired spaghetti sauce cans at anyone that annoys you.

Hitman 3 leaves me somewhat gloomier than I expected. I’m happy that it’s turned out so well, even with its mild issues, but I’m also left a bit wanting, knowing this may be the last tango with the bald dancer of death for quite some time.

Hitman 3 closes out the World of Assassination Trilogy with developer IO Interactive in confident mood. Lessons learned from the past five or six years have worked their way into this splendid epitaph for a series that looked dead and buried more than once along the way. As with its predecessor’s, there are some lows to go with the highs, but those highs? They are truly something special and make the future of IO Interactive an exciting prospect.