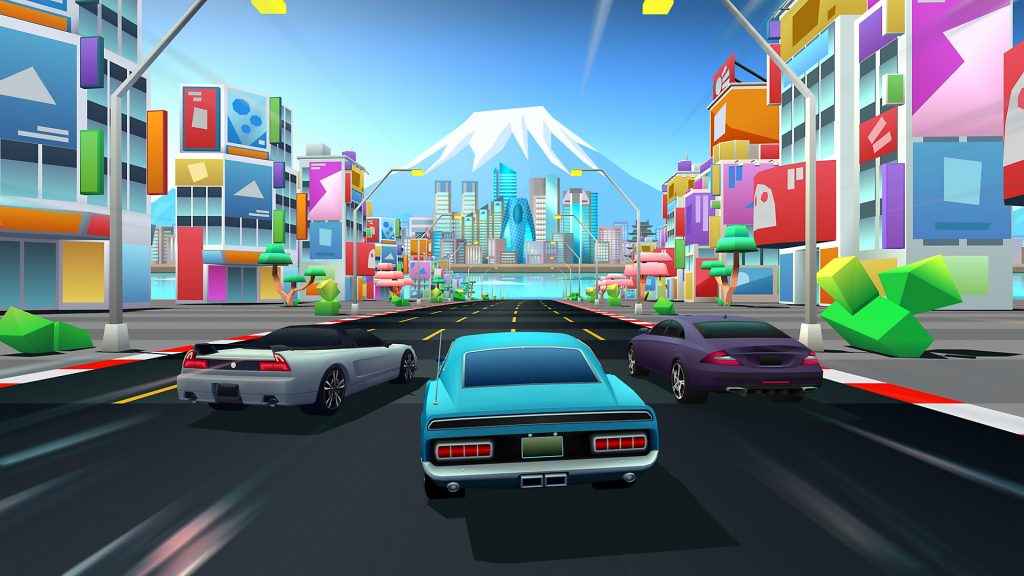 If you’re lucky enough to remember Lotus Turbo Challenge from the early 16-bit days, or even Sega’s classic arcade racer Outrun (the Yakuza games can see you right here, to be fair), then you’ll know what to expect from Horizon Chase Turbo; a handsomely made effort that aims and largely succeeds in bringing that bygone era of arcade racing to contemporary audience with a modern sheen.

From the beginning and throughout, Horizon Chase Turbo’s colorful and vibrant presentation ably echoes its decidedly retro leanings as the low polygon, flat shaded car models and environments appear as an attractive marriage between Sega’s Virtua Racing and Out Run games, functioning well in tandem to facilitate this very particular kind of white-knuckle, high-octane racing.

Beyond its compelling visual veneer, Horizon Chase Turbo also impresses with its soundtrack as sound designer Barry Leitch, who composed the soundtracks of 90s racing titles such as Top Gear and the aforementioned Lotus Turbo Challenge, weaves his aural magic here with a range of energetic anthems that deftly recall the heady racers of yesteryear.

Once you’re behind the wheel, Horizon Chase Turbo is pure 90s racing nostalgia and as such, the handling model absolutely reflects the likes of Outrun whereupon you can only go forward and the track scrolls towards your car as it sits at the bottom of the screen. Simply put, if you’re fan of those racing games, you’ll find a great deal to love here as the developer has done a fine job of emulating a style of racing game that you just don’t see anymore.

That said, the handling model embraced by Horizon Chase Turbo isn’t quite perfect as it currently stands and the main reason for this is that the collision system can be a touch aggravating to say the least. You see, because Horizon Chase Turbo uses full 3D car models (Lotus and Outrun both used 2D sprites back in the day by comparison) the developer has seen fit to include a physics system that makes every crash feel like bumper cars knocking into each other in a manner that though not absent of heft and weight, nonetheless feels a little more unsatisfying than it otherwise should.

Where this becomes more of a problem than a mere inconvenience however, is that you can hit someone from behind and the impact quite literally gives them a boost forward that is proportionate to the speed that you hit them at and yet, the same thing never seems to happen to your own vehicle when racing against the seeming infallible horde of AI opponents. Here’s hoping this is something that can be balanced by a good ol’ bit of patching in the future.

In terms of content, Horizon Chase Turbo is absolutely stuffed to the brim with stuff to do. With four different modes,12 championship cup tournaments set across 48 Cities with 109 tracks to tackle in turn, there is plenty for wannabe petrolheads to stuck into. More than the tracks themselves, players are able to unlock 26 additional cars and perform 10 different upgrades depending on how many credits they earn from each race that they successfully complete (there’s none of that micro-transaction nonsense here).

Earning credits from races is as simple as you think it is too, with currency dished out for which position you place in at the end of race in addition to the number of blue tokens that you manage to collect which are strewn around the track, players can earn a coveted Super Trophy to properly maximize their credit gains if they fulfill a set of specific conditions.

The problem with nabbing one of these coveted Super Trophies however is that not only must you place in first position but you must also collect all of the blue tokens as well; you can’t fulfill the conditions separately – both objectives must be completed in the same race. Now, while this isn’t much of a problem early on when the difficulty isn’t very punishing, it becomes much more of a problem in the later races where it is a monumental task to even place in the top three, let alone score a first place finish and grab all the tokens in the process.

In the end though, and much like its classical inspirations, Horizon Chase Turbo is arguably better when played in multiplayer and to that end the game supports four-player split-screen for some raucously entertaining competitive play that fondly recalls the bygone spectacle of four friends gathering around a 17inch CRT TV and an Amiga 500 back in the early 90s.

With online leaderboards and online multiplayer ghost racing modes to get stuck into, Horizon Chase Turbo offers a lot for players to tackle long after the already substantial single-player campaign mode has been bested, it’s a testament to Horizon’s lean design that the bite-sized nature of its races make it a simplistic affair to pick up and put down again at a moments notice.

Horizon Chase Turbo is a love letter to the 16-bit racers of yesteryear that you just don’t see other developers attempting to write these days. Though its odd physics model and occasionally overly punishing reward system can prove frustrating, Horizon Chase Turbo’s innate charm and accessibility ultimately wins out in the end resulting in the re-invigoration of a style of arcade racing long thought dead.

If you enjoyed our Horizon Chase Turbo review and have a hankering for more indie games, why not take a peek at our best PS4 indie games feature for more.

Horizon Chase Turbo is out now on PS4.

A thoroughly enjoyable arcade racer with an eye on the past, Horizon Chase Turbo does a commendable job of reinvigorating 90s arcade racing in a way that nobody else has really bothered to do.