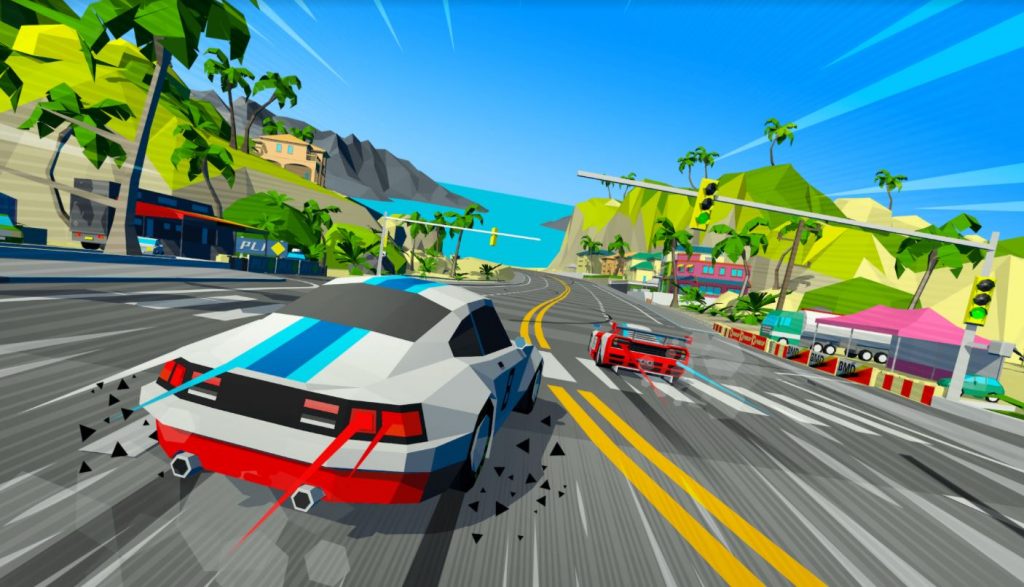 Hotshot Racing PS4 Review – Crowdfunding game development is commonplace these days, with many indie titles supported from the off by a gaggle of salivating gamers, hungry for a Spyro the Dragon knock-off or a new Industrial Estate Walking Simulator. Back in the day, it’s a little known fact that some high profile games were actually funded through unorthodox means: Hideo Kojima was forced to auction off his stuffed owl collection to raise the money for Metal Gear Solid and Peter Molyneux could only complete the Fable series by taking up a paper round before he went to the office. I’m kidding of course, but how does Lucky Mountain Games‘ Hotshot Racing, which was crowdfunded hold up?

The first thing that strikes you when you get stuck into Hotshot Racing is the crisp retro beauty of it. Fabulous and authentic low polygon graphics with startling lighting, a dazzling colour palette and hi-res spot effects to remind you that you’re playing a modern game. It perfectly evokes the classic Sega arcade titles from yesteryear: Daytona USA, Virtua Racing, Outrun 2 and several others from that era.

The audio perfectly augments the visuals, with bouncing 80s synth-pop and a moronic voiceover complemented by some slightly more up to date engine sounds. As a modern time capsule, Hotshot Racing nails it. The main comparison on PS4 would be Horizon Chase Turbo, sporting more basic track visuals but concealing a surprisingly deep and playable arcade racer with a wealth of circuits and cars.

Old Kid On The Block

So how does Curve Digital’s new/old kid on the block play? Well, the emphasis is on building your boost bar through drifting and drafting in order to beat the seven other cars to the finish line on three-lap circuits in Career mode. There’s not much else to the mechanics of the driving, other than staying on the track and defending yourself against the super-aggressive AI cars.

There’s a good sense of speed, and although the cars feel light and low on inertia, the handling is satisfying once you nail the drifting and sail around the tracks cleanly, boosting your way to victory. Career mode has eight different characters to choose from, and each character has a choice of four cars with different strengths – strong on drifting, acceleration, top speed, or an all-rounder. Like Horizon Chase Turbo, there are really only a handful of different handling models, but unlike the upgrade system in that game, Hotshot Racing doesn’t offer performance upgrades, merely superficial add-ons which can be purchased with the money earned during the career.

I found this to be slightly frustrating, particularly as the visual upgrades weren’t striking enough to bother with and did nothing to change the car’s potential. Conversely, completing the career requires victory on sixteen circuits, each at three difficulty levels, and without the ability to pimp my jalopy I wasn’t particularly inspired to replay all sixteen tracks twice against the increasingly annoying opposition with just a different paint job and a massive spoiler added.

Each character has some sassy dialogue and one-liners which they interject with and completing one of the four tiers of the career with them delivers an entertainingly melodramatic cut scene.

Bite-sized amusing alternatives to the career mode are the single-race options, Cops and Robbers, and Drive or Explode. Cops and Robbers is a frenetic game of tag, with half of the cars trying to avoid the police to pick up cash on the circuit, with captured cars becoming police in a race to nail the last escapee. Drive or Explode punishes the slowest cars with destruction, so not particularly original but an entertaining diversion nevertheless.

So far so good, then. But the main problem with Hotshot Racing is the circuits. Initially, the simplistic nature of the tracks is to be expected, as you acclimatise to the controls and master the drifting on simple extended ovals with a few kinks here and there. But then rather than ramp up the complexity of the circuits as you play through the sixteen tracks, the developers seem content to merely change the trackside details, add a few chicanes and be done with it.

The tracks offer up as much challenge as the opening gambit of a basic kart racing game and rather than mix things up with some banked sections, figure-eight crossovers or jumps, there is scant variety between the circuits which is a massive shame.

As a result, the racing ends up feeling too simplistic, with only your boost as a comfort and no power-ups to collect. The AI cars swarm around your backside like wasps to a jam tart and regardless of how faultless your drifting and boosting has been, they’ll still be there, rubber banding your hiney making the boost system arbitrary and undermining the only game mechanic on offer.

So although the attention to retro detail is faultless and the multiplayer options will prove popular, the main problem lies with the circuits which offer little in the way of a challenge and are way too samey. Should Lucky Mountain decide to add a bunch of more undulating and twisting tracks as a free DLC, a whole lot more depth and variety will be on offer. Upgradeable cars, a few on-track pick-ups, and less annoying A.I. cars and it would be a winner.

As it is, there is some good multiplayer fun to be had here, and the nostalgia induced by the wonderful visuals will provide some short-lived fun for anyone who wants to relive the feel of the Sega arcade classics from the 80s and 90s.

An authentic recreation of the best of the Sega arcade racing classics from yesteryear, but sadly lacking in depth due to the simplistic circuits and repetitive gameplay mechanic. Split-screen or online multiplayer is the way to get the best from the game.