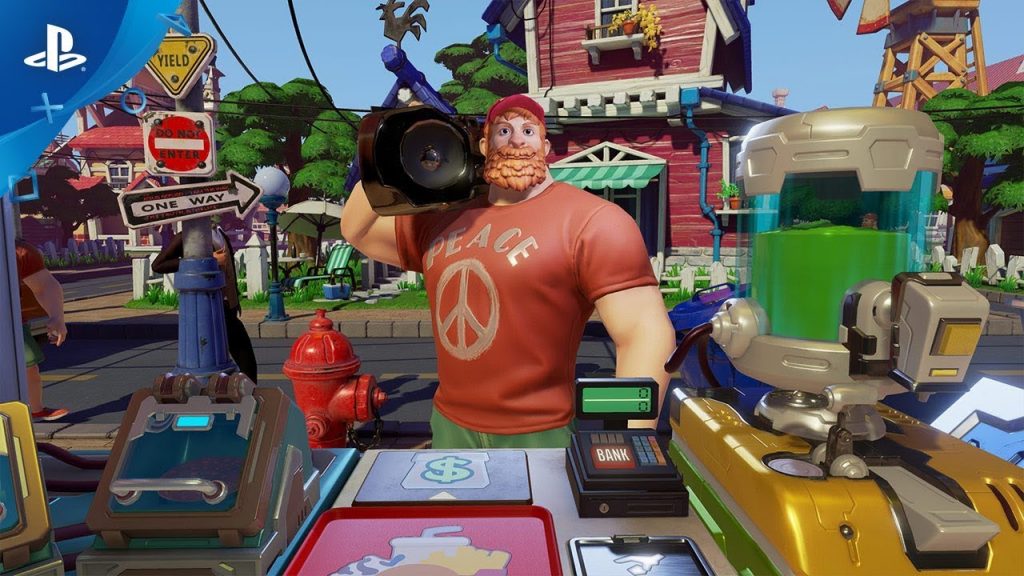 Why would you want to work when you have some free time to enjoy playing video games? We seem to have this obsession at the moment with doing virtual mundane jobs and this is not any different in virtual reality. In fact, I think its more popular in VR where you are front and centre and slowly traversing the doldrums of everyday life. We have had all manner of food service and cooking games on PlayStation’s virtual reality platform and I’m Hungry is the latest in a line of virtual culinary titles.

I find it funny when people will quite happily work in a burger van for hours in VR but would never dream of doing this in real life for actual money. I have always wanted to try working in fast food and have enjoyed the few food preparation VR experiences I have tried so far, so does I’m Hungry match those?

The gameplay premise is very simple. A customer will approach, give you an order to fulfil and you do what you can to get is as correct as possible and served as efficiently as you can. You have four machines that output different items and the burgers have two topping options. Its all very simple and the levels start out easy to ease you into the mechanics of the game. In each level you are rated out of three stars depending on your performance; this is where speed, memory and preparation come into play, especially later on when the orders become more complex.

When you have prepared the order, you have to grab a paper bag, shake it to open it and pick up the food, handing it to the customer. You are then presented with your hard earned cash and have to deposit it into the till. It’s all very immersive and works well. I never grew tired of putting money in the till or flapping bags and filling them with peoples orders. In the heat of battle, when the orders are flowing and the customers are piling up, the game is quite fun. Well, early on anyways.

My biggest issue with I’m Hungry is that it gets very repetitive and there is nowhere near enough variety to the gameplay. You only have four machines, and three of them have no options to vary them up at all. The game can be fun and it’s a shame the repetitiveness eventually wears the entertainment away. Once you get to the point where you can pre-empt orders and even prepare food one-handed while dealing with customers it feels great. It just needs more food options, more variety, and some ways to mix up the gameplay somewhat. I got bored halfway through the first set of levels and found it hard to proceed, but I ploughed on.

Even though the campaign has two sets of levels, there is a challenge mode and you can upgrade your machines. But, apart from the burgers all other items that can be ordered are just a button press or a lever pull away. I became so bored early on in the game. Even upgrading the machines is a ridiculous grind. Each upgrade costs $10,000 and I was only halfway towards one upgrade that after a few hours gameplay.

Some small extra gameplay components are thrown in further into the game. You can make any of the ordered items golden by shaking them about. I don’t know why but you can do it and some customers want that. Your reward is a big stack of cash but when the upgrades are so steeply priced it all seems a bit redundant really. I really started to feel deflated and had no drive to continue at this point. The levels got repetitive, the money grind for upgrades was too long and I felt I was not being rewarded enough for my pursuits.

Even when I was completing the orders flawlessly, I was prepping ahead of time, and flying through customers like a food preparation god, my rewards were nominal and it all felt pointless. I did not get rewarded much more for really trying to do well than I did for just plodding through. Where were my incentives? Why was I bothering with any of this? Where was the fun? These were all questions I started to ask myself and it really took the enjoyment out of something that could have been a fun and rewarding experience.

At Least Its Pretty

One thing I will say about I’m Hungry VR is that its presentation is good. All the characters are modelled and animated well, the machines and environments are all crisp and bright and I enjoyed being in the middle of this virtual space. The sound design is also worth focusing on, the chips sizzle away and the characters speak in a ‘Sims-like’ gobbledegook that I found quite endearing. The whole design of the game is charming the environment is detailed and designed well.

The same goes for the VR implementation, I had zero issues with tracking or and the typical VR problems rarely cropped up. I had issues at the start of the game when it detects your setup though. You are asked to stand in the middle of the play area but it does not show you where that is. I found myself edging around my living room until the game was happy about where I was standing. It was fine after that though and I had no issues otherwise.

You May Want to Eat Elsewhere

I’m Hungry is certainly not a bad game, its just not very enjoyable for longer than an hour or two. It gets very repetitive, the rewards are too small, and the grind is endless. The second set of campaign missions does mix it up by having disappearing orders and there is fun to be had in small doses. I just feel a few different machines and ways to prepare food would have gone a long way to improve the overall gameplay.

When I compare it to other titles of this ilk it feels very light on gameplay features and it’s definitely not as fun. Even the cooking in Vacation Simulator and Job Simulator are vastly superior and that’s only a small part of those games. They are fun and have lots of cooking options, I’m Hungry just feels poor in comparison. If you are up for a cooking game and have played all the others, I’m Hungry may have a hard time satisfying your hunger. I would definitely wait for a sale though and be prepared for a big grind and a lot of repetitiveness if you really want a new cooking simulator.

I’m Hungry is out now on PS4 and PSVR and is developed and published by Winking Entertainment.

Review code kindly provided by the publisher – support on the game is provided here – https://www.facebook.com/WinkingCorp/

Repetitive, endless grinding and a lack of rewards spoil what could have been a fun experience. Its presentation is nice and its VR implementation is good; otherwise, there are better culinary titles on the platform. Unless you are starving for VR food-based content, spend your hard earned cash elsewhere. There is fun to be had but it's in very small doses buried under monotonous, basic food preparation.