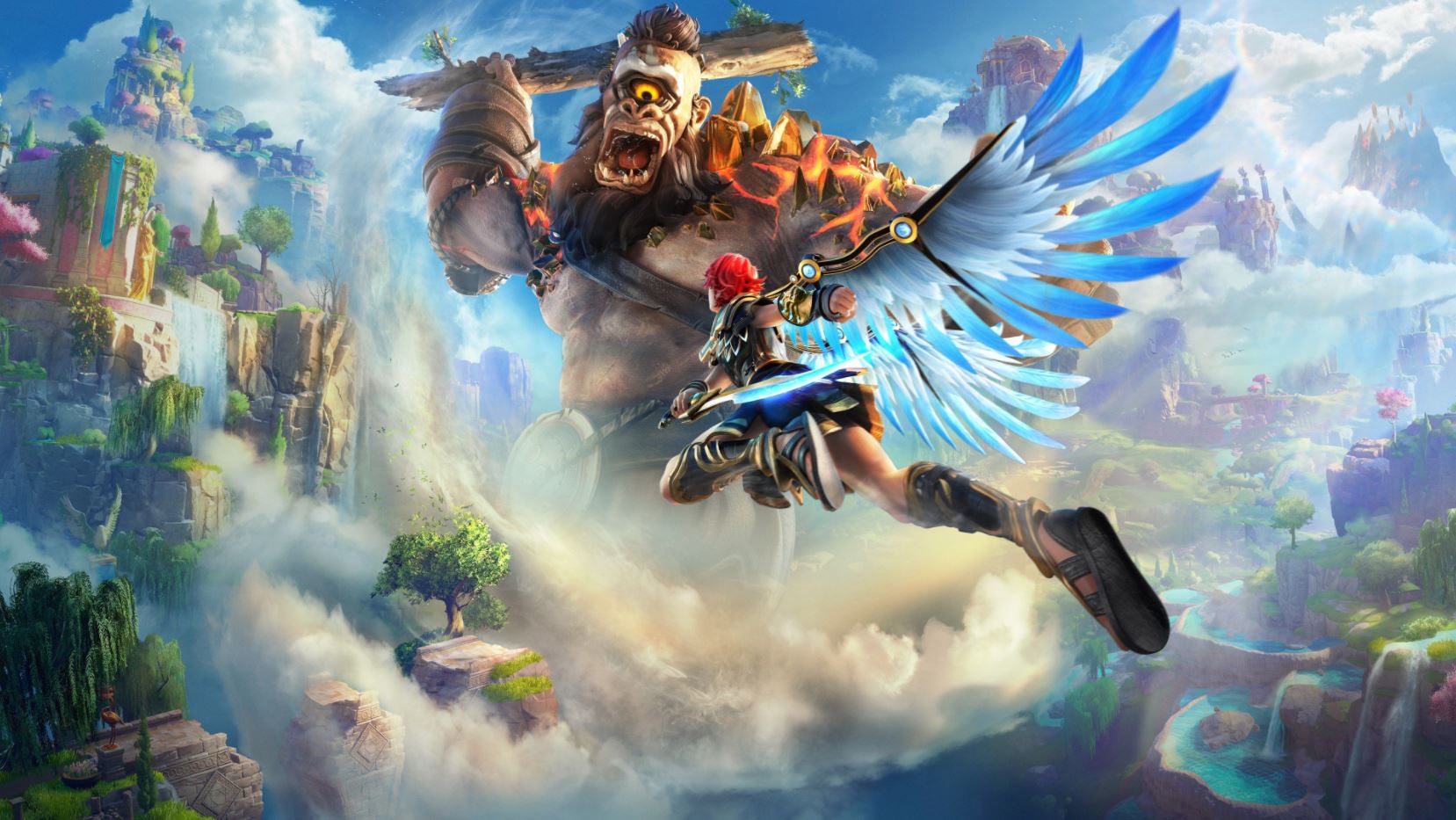 Immortals: Fenyx Rising PS5 Review – Few companies in gaming show just how much the industry has changed in the last 20 years quite as much as Ubisoft.

Bar the odd exception over the last decade (Starlink, Rayman Legends), getting a taste of that peak Ubisoft kind of game has been increasingly rare. There’s a model that must be followed, I get that, but surely there could be room for an adventure that gave us a compromise between the kind of game the company used to make and currently does?

Immortals: Fenyx Rising is that compromise. The team behind the Greek Odyssey that was, erm…Assassin’s Creed Odyssey dives deeper into the fantastical world of Greek mythology with Immortals, and with some generous cribbing from its stablemate, as well as a game made by Ubisoft’s good chums at Nintendo, has created a highly enjoyable adventure that does its best to form its own identity.

A Tale From Long Ago

Immortals begins with a chained-up Prometheus telling Zeus the story you ultimately end up playing. That story is about the titular Fenyx, a mortal living in the shadow of their heroic sibling in Ancient Greece.

Fenyx awakens from a shipwreck to find the monstrous Typhon has turned the rest of humanity to stone, including their sibling, and has imprisoned several of the Gods in new forms that take away the very essence of their personality. With no heroes around to help out, the insecure Fenyx is charged with restoring the Gods and defeating Typhon.

So Fenyx goes roaming the open-world in search of the tools to make them a champion of the Gods. This open-world isn’t as alarmingly huge as Ubisoft’s usual efforts. Instead, it contains things in a couple of sizeable islands but packs them with all sorts of different puzzles, items, and monsters.

The pace is fairly zippy for an open-world game and you’re never too far from something to do in Immortals. The game allows for an admirable amount of freedom in how you tackle things for the majority of its playtime.

Each region belongs to one of the God’s you need to restore, and while the game does gently push you to start in a certain place, you can easily go off and explore the world, or start another God’s questline. There are some places and treasures you can’t reach that either requires you to upgrade your stamina or have particular abilities you can only obtain from a God’s questline, but these don’t really prevent you from progressing the story.

The elephant in the room with Immortals is just how much it borrows from the blueprint set out by Nintendo for 2017’s The Legend of Zelda: Breath of the Wild. I really didn’t want to bring it up, but it’s unavoidable given how blatant the influence is on Immortals.

The art style is similar, the puzzle-based shrines are here as vaults, the map’s central focus is the big bad’s home enveloped in a swirling storm of bright red. The potion-mixing, the climbing, the gliding, the stamina, the legendary monsters. I get that may be seen as a rod to beat the game with, but it’s not much of a criticism given what Immortals changes and adds to that blueprint.

Dynamic, Snappy Combat And Action With Some Storytelling Ideas Of Its Own

Firstly, this is a more streamlined experience. Traversal plays a part in getting the story moving, but it’s playing third fiddle to combat and puzzle-solving. Climbing has its taxing and tense moments, but there were far fewer frustrations than I expected from it given the use of a stamina meter.

Puzzles are a familiar, yet satisfying mixture of platforming, block-lobbing, and switch-hitting. There’s a few types of puzzle to encounter, but Ubisoft has done a really good job in changing up the basics enough between them to not make them that repetitive.

Combat is, somewhat fittingly, closer to the old God of War games than it is Breath of the Wild or Assassin’s Creed, with a quickened pace and an emphasis on combos, dodges, and parries as you unleash an increasingly dazzling arsenal of godlike moves on Gorgons, Harpies, and Legendary Chickens.

The lock-on is not particularly effective, especially when some enemies can shift around at a fair pace, but I don’t think I ever lost a fight solely because of it. You get to learn the patterns of each monster type after a while, and to begin with, where taking on a couple of beasts at once is an intimidating and panicky experience, it does eventually become second nature to flit between multiple monsters, chaining moves together, timing dodges perfectly, and parrying like a master.

There’s an element of stealth in there in so much as you can get a damaging sneak attack on the first enemy in a group, but that’s about as subtle as Immortals gets in combat. It helps that the game doesn’t nab one of its influences most divisive features by having breakable weaponry. All weapons and armour you find are equally powerful, with upgrades making the collective stronger each time; but each style of weapon and armour has its own perk, such as regenerating health after a combo or doing extra damage using a certain move.

Fenyx befriends a fiery bird that they name Phosphor, which feels like a very Assassin’s Creed kind of touch, but the bird is more directly involved with combat. Like your armor and weapons, Phosphor can be equipped with different ‘skins’ that bring their own perks from a barrage of firebombs to temporary invisibility. You also get a questline just for Phosphor which feeds nicely into the larger narrative.

The storytelling is the other major departure from Immortals influences. Prometheus narrates the story, with Zeus providing colour commentary of sorts. The bickering double act initially seems like it will be an exercise in heavy eye-rolling comedy, but once the game settles into things, there’s genuine charm and humour to it.

This isn’t a particularly explicit or violent take on Greek Mythology, with a slightly more family-focused spin being the approach, but it’s more than happy to indulge in a splash of innuendo and tuck into the darker aspects of the myths.

What surprised me most about the storytelling setup was that it doesn’t just exist for the sake of having a Statler and Waldorf routine of the top of a Greek epic, it eventually unfurls to show Zeus the effects of his hubris and ego. The game’s lengthy finale does some predictable things once it becomes obvious where the story is going to go, but Prometheus’ tricksy storytelling keeps things interesting along the way, occasionally breaking the fourth wall in reaction to Zeus’ mood.

The smattering of information about actual Greek myths in Prometheus’ narration is handled in an enjoyably seamless manner that doesn’t feel like you’re being taught a class, nor is it clumsily dumped in as clunky excuses for exposition (well, maybe a little bit).

It’s also actually funny at times. There’s the odd good zinger in the banter between Prometheus and Zeus, and some fun ‘alternate’ versions of the stricken Gods (Ares’ transformed self is a particularly amusing take on the character, and yes, there’s a reference or two to that other popular ‘God of War’). It doesn’t always hit, but it doesn’t try to outdo itself with each gag. The pun work might be groanworthy to some, but I’m a sucker for daft puns, so the ones in Immortals pleased me greatly.

Immortals’ has, more so than Watch Dogs Legion or Assassin’s Creed Valhalla, been designed for multiple console specs. Not only does it have a PS4 and Xbox One version, but it is also headed to the lesser-powered Nintendo Switch. So to begin with, this isn’t quite the technical juggernaut its recent stablemates are. So what can this PS5 version do for it?

Load times are naturally pretty swift. There’s barely ten seconds from pressing continue on a saved game to being back in the action, and fast travel is never more than six seconds. The activity cards do their job in getting you into a particular mission without the fuss of extra splash screens, but at this time, they come with a bug that sees a loss of narrated audio until you quit and restart through the main menu.

It’s not a particularly striking game to look at for the most part, but pretty easy on the eye all the same. So, there’s not too much offered by having 4K, but there’s still a nice level of detail to characters and some scenery really sparkles in the right light. It also runs smooth as you like, even when the action gets particularly hectic. A much-needed quality considering the targeting camera isn’t great.

The DualSense controller gets some use out of its haptic feedback and adaptive triggers, but in all honesty, it could have been better. Climbing registers little rumbly clicks alongside audio from the controller’s mic. That was a bit weird at first, making me worried I’d broken the controller. It does make sense when you get used to it, but it’s a use of the controller that gets repeated in various things and it doesn’t quite fit in all instances.

Surveying the world, the mic and haptics combine to do little clacks as you near a point of interest in your view, once located, you snap down on R2 and permanently mark it on your map. If you try to just spam R2 around the rough area something is supposed to be then the trigger locks to effectively slap your hand in disgust at your impatience. It’s an interesting way to do map-marking, but the sound is a tad annoying after the fiftieth time.

Triggers come into play when nocking your bow (a litmus test for PS5 games use of adaptive triggers it seems) and the feature is serviceable, even if it could easily be better. Its inconsistent use is exposed when lifting rocks or blocks of rubble, with these actions not making much use of the feature.

I can understand it’s not easy to adapt to the controller in the embryonic stage of PS5’s life cycle, but in future, developer’s need to either go all-in on using it or not at all, because it kind of spoils the point of it if only some things use it.

I must admit I was quietly optimistic about Immortals when it was announced, simply because it was nice to see Ubisoft not trudge out that realism-laced open-world formula for once. Everything I’ve played since has met expectations quite nicely.

Yes, it’s brazen in how it borrows things from “that” game and it’s still another open-world collect-a-thon, but it’s a more compact and fun-focused one than usual. You can actually finish the main story in around 20-25 hours, but there’s plenty more to be eked out of it should you wish to thanks to a generous helping of puzzles and vaults poured into the game world. As an alternative to the multiple 60-100 hour titles with serious faces on, Immortals is a worthy champion.

Immortals: Fenyx Rising is available for PS5 on December 3, 2020.

With Immortals: Fenyx Rising, Ubisoft has created a refreshingly compact throwback open-world adventure that can be forgiven for its aggressive repurposing of other games best bits because it shapes them to fits its own style. The exploration is brisk and eventful, the puzzles are varied, with the right level of challenge and simplicity, and the approach to storytelling ultimately pays off. The DualSense features are a bit hit and miss, and it’s not exactly the best advert for the power of PS5, but much like the game it cribs from, Immortals’ qualities outshine any need for major technical showcases.