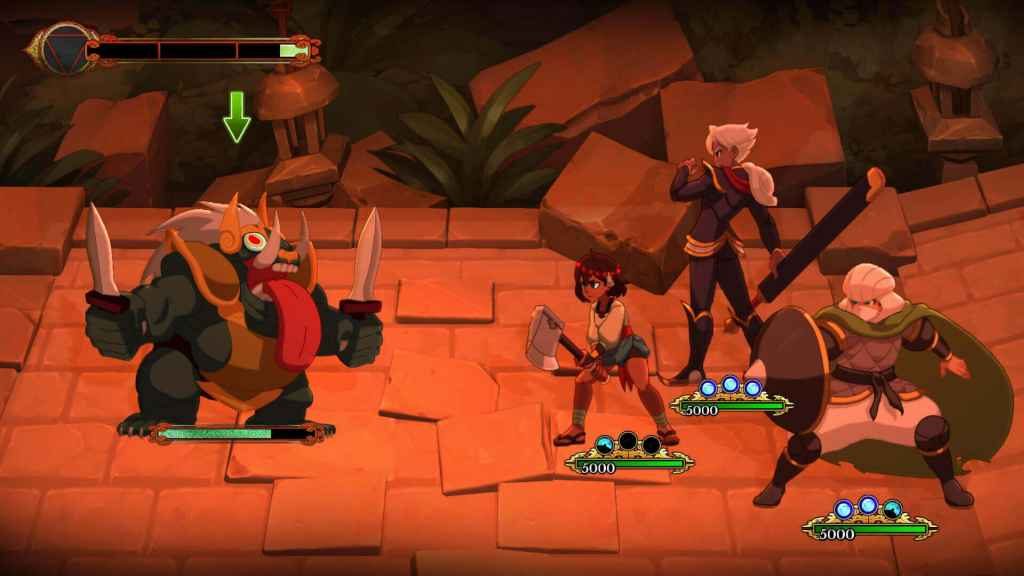 I really, really like Indivisible. My entrancement with the game was utterly unexpected. I’m not very familiar with developer Lab Zero games. I have never played their previous hit, Skull Girls. I don’t really care for platformers. At first glance, screenshots of the art style kinda turned me off. I had only heard of the game maybe a week before the review code came drifting in.

But then I fired Indivisible up, and the characters came to life with a wit and grace that is beguilingly charming and at times laugh-out-loud funny. The art in motion is so beautiful that I actually got up from my sofa at certain points so I could examine character details with my face almost touching the TV.

And the battle system? Come on. Ludicrously good.

Indivisible tells the story of Ajna, a rebellious and slightly irresponsible young lady being trained in the ways of combat by her warrior father. When her village is unexpectedly destroyed by an invading force, Ajna is left as the lone survivor.

When she learns that the incursion came at the behest of warlord Ravannavar (voiced by Star Trek’s Worf – Michael Dorn!), Ajna wastes no time worrying about details and gets straight down to business. She sets out to find Ravannavar, bloody vengeance on her mind.

Along the way Ajna meets a variety of characters, most of whom she convinces to join her party. And by “convinces them to join her party,” I mean “absorbs them into her psyche so that she can unleash them in battle like human Pokémon.”

It seems that Ajna has the power to suck other people into a sort of other-worldly dimension within her mind, where they hang out and wait for fights to start. The very first person she absorbs is Dhar, a commander in Ravannavar’s army. Dhar is none too happy at the fact that he now lives in the mind of his enemy and now has to fight his own allies, but Ajna deals with his dissatisfaction by taunting him and screaming at him to “shut up.”

It is through character moments like this that Indivisible turns many RPG conventions on their ear. The overall mission structure seems boilerplate, but the way the characters react to the events taking place is utterly unexpected and charming.

Very early in the game, Ajna absorbs Razmi, a pyromancer/shaman who is utterly unimpressed with the entire situation. She spends the majority of the game advising Ajna to set people on fire and attempting to force-feed bugs to strangers. She is my favorite character in the game, and is right up there with my favorite video game characters of all time.

And the characters in Indivisible are all like that. With an all-star voice cast, the developers at Lab Zero Games have found a way to upend expectations with character-driven one-liners delivered with laser precision, while still maintaining a fair amount of heart in the storytelling.

After seeing Indivisible in motion, I was almost ashamed at my initial negative reaction to the artwork. For some reason, hand-drawn art turns me off sometimes in video games (it doesn’t look video game-y enough to me, I guess). But Indivisible is the game that changed my mind.

The characters and backgrounds in Indivisible look absolutely stunning. I’m having a hard time putting into words just how much pleasure simply looking at this game gives me. Most of the game looks like a fabulously detailed cartoon come to life. This gives the game a very human look and feel, with small details that delight the player at every turn.

The backgrounds are varied enough that they never get boring. It’s surprising how well the animated characters merge with the environments they inhabit. I would happily watch an animated feature (or series) produced by this team, using this art. It’s that good.

Indivisible’s Exploration Is Great (Most Of The Time)

Gameplay-wise, Indivisible merges two familiar systems, seamlessly alternating between them. The primary system is the Castlevania-style platforming/exploration. For the most part, I found this part of the game to be satisfying, though I’m not really a platformer fan.

As Ajna continues her journey, she unlocks a variety of cool new exploration powers that change the way she navigates the environment. This necessitates some amount of backtracking, as you have to return to earlier areas to check for new paths.

But the clever level design kept me engaged for most of the game, until I finally ran out of steam towards the end (this is a big game). Some of the platforming sections seemed to spike in difficulty, but to be fair, that may just be my inexperience talking.

I also had experienced a few instances wherein I platform-ed myself into untenable situations – pits that I could not escape from, for example. Some areas of Indivisible seemed to drop me down into rooms with no egress. I could not reach the chute I dropped from, and found no other paths out. In these instances, I was forced to wonder whether I was experiencing a bug or was simply unable to discern a solution. Loading up a previous save file allowed me to continue with the game, but potential players should be warned that potential bugs do appear in Indivisible – and they may halt your progress temporarily.

Much more interesting to me was what I’ve seen represented in pre-release press as the “Valkyrie Profile-style” combat system. I’ve never played Valkyrie Profile, but if the combat is anything like what I experienced in Indivisible, I’m totally going to check it out.

Players can assign up to three characters to accompany Ajna into battle. Each of these characters is assigned to one of the face buttons on the controller. Depending on whether enemies are attacking, the face button for each character will either attack or defend when pressed. At first glance, this system seemed extremely basic, but as the game goes on, it reveals depths that I hadn’t anticipated.

If a character is assigned to Triangle, for example, the Triangle will defend that character (with proper timing). A cooldown will also light up the ability to attack up to two times. Successful defenses and attacks build up a shared party-level power gauge, which can be used to fire off powerful special attacks. Additionally, each character has a variety of moves. A simple attack is fired by pressing the appropriate button, but pushing up or down on the Analog Stick while pressing the button will fire more contextually powerful moves.

I found myself deeply engaged with this system, experimenting with juggling the timing of button presses and cooldowns, trying to maximize attack combos. It was also great fun to mix and match characters to see how their powers interact in combat situations. The variety of characters is huge, and they all have special abilities (healers, ranged, magic, etc.).

For example, Ajna can’t reach flying enemies, but a couple of shots from a ranged party member will bring hovering baddies crashing down to earth, where she can easily attack them with her axe. This dynamic isn’t blatantly explained by the game, but is left to the player to discover and implement. When planning your button presses, this greatly effects the order in which you deploy attacks.

The only issue I really had with the combat system was how tough some of the early enemies were. Don’t get me wrong – they didn’t often wipe out my party. They seemed to have an abundance of hit points that made battles go on much longer than was necessary. As the game goes on, this becomes less of an issue, but it made the early game pretty slow-going.

But my quibbles with the uneven difficulty are just that – quibbles. In the end, Indivisible is a greatly enjoyable game that delivers a ton of unexpected laughs, grand visuals that feel fresh and innovative, and a deep battle system that RPG fans can sink their teeth into. Indivisible is a game that I can recommend to almost anyone – platformer fans, RPG fans, animation fans, and even fans of none-of-the-above.

There is something to enjoy in Indivisible for everyone. This game is fun – pure and simple. If you like fun, you will love Indivisible.

Review code kindly supplied by the publisher. Indivisible is available 10-08-19 on PS4.

Everything in Indivisible – from the colorful visuals to the “Oooom” noise when you save your game – is calculated to delight. Despite some uneven difficulty, both the platforming and battle systems entertain. But it’s the character design and voice work that is really the star of the show here, making Indivisible a strong contender whether you are a genre fan or not.