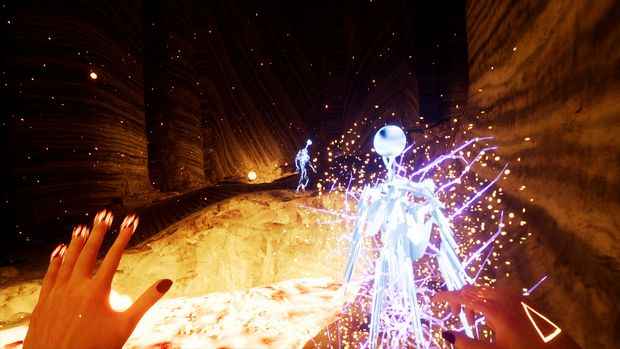 Horror is most commonly associated with jump scares and gore, especially in video games. So it’s always admirable when a developer tries something a bit more cerebral, a bit…different. Infernium is certainly that.

As such, Infernium is deserving of praise for the ideas found in Carlos Coronado’s curious first person horror. That wont matter much if the game doesn’t match the ideas, themes, and aesthetic.

Infernium sees you as an ‘observer’, an entity that wanders Hell. Normally Hell is depicted as this fire and brimstone place, vast swathes of inky darkness lit only by belching flame. Infernium goes in a different direction. Its hell is an open, bright and beautiful place (making smart use of Unreal Engine 4) that lays its horrors out in plain sight. There are regal castles to wander, and breathtaking waterfalls to take in among the sights on offer. This is offset by the fact you’re often pursued and always looking to move on. Infernium imagines hell as seeing beauty whilst in a hurry. A mere peek at what could be paradise if not for the underlying horrors it holds. It’s a bold move, and instantly helps the game stand out. It may in fact be why you persevere with Infernium, because its opening hours are often painfully laborious.

The early hours of Infernium are spent fumbling for a clue on what to do next. The pace is glacial and the deaths come easy. That is not helped by the system Infernium uses. When you die -anytime you die- you’re thrust back to a small dark room that contains twenty five orbs. These represent your ‘lives’ effectively, and once they are gone, you must start the game over again (unless you progress to a certain point). Thankfully, Coronado’s game borrows an idea from FromSoftware and allows you the chance to reclaim your last lost life, but you best hope the checkpoint (which are rare beasts) is close.

Everything from traps to enemy placement is set in stone, so you can at least learn from your errors. That does unfortunately take away from the long term effects of the game’s horror. The shrouded entities that appear throughout are, at first, intimidating and suitably ghoulish against the bright backdrop, but knowing their pattern on second, third, and fourth encounters replaces dread with listless ambivalence. When you factor in the long-winded loading times as well between each attempt, then Infernium can really needle at your patience. As such, the game’s consistency in tone is easily shaken

Taken solely as a game, Infernium isn’t really cohesive enough to work as it should. Taken solely as a horror though? Well that’s where it gets interesting. Yes the enemies get somewhat predictable and dull as time goes by, and the sound design, which is initially superb with its strange groans and moans, does soon get blatantly repetitive. Yet Infernium still manages to hold a sense of otherworldly dread in its balance of beauty and the bleak. The story is told via vague etchings, and while that makes it a difficult game to invest in, it is one that feeds curiosity quite effectively.

This is not supposed to be a pleasant time, but the game definitely suffers for being too vague with its audience for long stretches. That is what makes it interesting as well, but perhaps the balance could have been handled a bit better. Infernium deserves plaudits for its depiction of Hell, and for trying something genuinely different with a survival horror-style game. It’s just unfortunate that poor load times and mechanical misfires keep it from being as special as it could have been.

Infernium is a vague, inconsistent jumble of a game, and that bleeds into its horror all too often. A shame really because what Infernium tries to do with its setting and storytelling is refreshing. This may be a trip to Hell, but it needn't play like it.