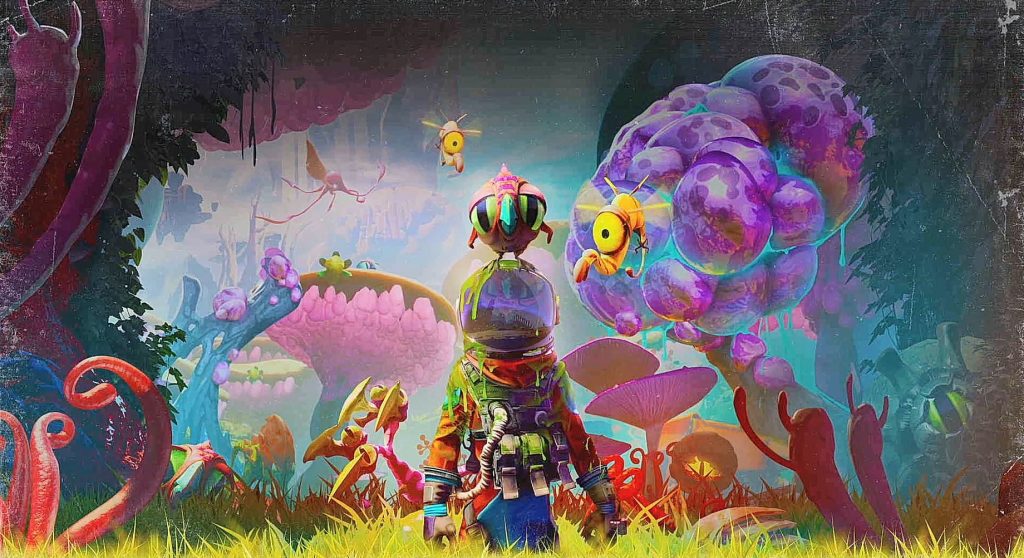 Early on in my playthrough through Journey To The Savage Planet, I was hit with the realisation that the game was one of the most refreshing I have played in a long time.

Why, you ask? Typhoon Studios‘ first title stands out as it is a game where the complexities of a narrative, a sprawling open world, and lengthy upgrade trees are all thrown out of the window in favour of a digestible, arcadey, and enjoyable experience.

A 10-15 hour journey that combines genres and doesn’t take itself too seriously, creating a refreshing concoction that reminded me that not all games have to push the boundaries of the industry to be worth playing.

In Journey To The Savage Planet, you are an employee of Kindred Aerospace, a space travel corporation that is tasked with finding a new home for humanity. Travelling on your own, you are sent to planet AR-Y 26, the titular Savage Planet, alongside a robot computer on your spaceship, called E.K.O.

Upon landing, you head outside onto the surface of the planet and begin to explore, gather data, investigate the creatures, and discover anything and everything you can about the planet.

The story is never the driving force behind your adventure here, but it does develop slightly, highlighting corporate power over us as humans. The bulk of the interesting narrative beats come through the world-building done through emails and videos.

In your spaceship, you have a video screen that plays a range of advertisements, some of them quite funny, including what might be my favourite parody of the video game industry’s love for multiple editions of a game and microtransactions.

However, those advertisements are occasionally interrupted by live-action video feeds of Kindred Aerospace’s CEO, Martin Tweed (played by Adrian Burhop), who is your typical monologue giving CEO, often talking about how ‘valuable’ your work has been, when it is clear that he is being disingenuous. Adrian Burhop does a good job at playing the eccentric CEO and is a great complimentary character to the sarcastic and dry E.K.O.

These two characters are nothing amazing, but they do add a nice bit of comedic flavour to the most enjoyable part of Journey To The Savage Planet: the gameplay.

Journey To The Savage Planet incorporates a lot of genres in its gameplay. The game is part first-person shooter, part survival game, part Metroidvania, and part exploration game.

But, the important part is that they work in tandem with one another surprisingly well. The core loop of the game is to explore the world and slowly work your way through the game’s four semi-open world maps, completing environmental puzzles, scanning flora and structures in the environment, and killing the weird and wacky creatures that call AR-Y 26 home.

The game’s Metroidvania aspect applies to the numerous environmental puzzles in the game, with areas requiring different tools and gadgets to access. These tools range from a grappling hook to a rocket boost and a special glove that lets you hold bombs to open up walls and cave entrances.

These new tools are doled out at a comfortable and smooth pace, changing up the exploration and traversal just enough to keep it interesting.

Typhoon Studios have done a great job at bringing a lot of personality to the game through the creatures. Each one has a memorable look and their colours and design are a perfect match with the varied environments and cartooney landscapes of planet AR-Y 26.

Small and cute Pufferbirds, floating Jellywafts (which are a mix between an octopus and a jellyfish), large hulking toads called Slamphibians that spring into the air and crash down onto you, each enemy feels distinct and memorable and discovering them was one of my favourite things to do.

The actual combat of the game, when fighting some of the more deadly creatures, holds up surprisingly well and is a good deal of fun. It takes an arcadey approach with you being able to dodge sideways, jump around, and not have to worry about running out of ammo (only having to reload).

Much like the rest of the game, it isn’t trying to be the next great innovation in the industry and takes a carefree approach that I found refreshing in a period where double-A and triple-A games are becoming more and more serious and thematic.

To add some meat to the bones of the gameplay loop, Journey To The Savage Planet is also filled with side objectives, collectibles, and even optional story secrets that give some more weight to the backstory of the game.

Those optional story secrets are welcome as the game’s conclusion isn’t very satisfying, with the game feeling like it was missing the final page of a book.

But, if like me, you love collectibles and reaching 100% in a game then Journey To The Savage Planet has you covered with more than enough optional objectives and things to find that your playtime will be extended significantly if you choose to hunt them down.

If you want to kick back and have some fun with a friend, Journey To The Savage Planet allows that through online co-op. Unfortunately, the game does not feature local split-screen co-op, which is a huge bummer as the game is a perfect for it. It would also make a great parent and child experience due to the cartoony nature of the game.

However, the online co-op is there and during my hour and a half of experiencing it, I can’t say I was impressed. I encountered huge lag issues and glitches due to the fact that one player is the host. So, the game runs off of their save data and network and they are playing locally.

However, the joining player connects to their game and has to play through the internet, which causes some annoying and frustrating lag, especially during heavy combat sequences.

On top of that, the joining player doesn’t retain any of their progress or materials they have earned. So, unless you plan on marathoning the game in one sitting or leaving your PS4’s on, there doesn’t seem to be much point to the co-op at all, which is unfortunate.

Playing on your own is really the best way to play and the experience is a fun and laidback one.

An Enjoyable Romp To Kickoff The Year

If you want a fun and not too serious game to play before the big hitters of 2020 arrive, then you can’t do much better than sticking on a podcast or your favourite playlist and spending some time on the Savage Planet.

Journey To The Savage Planet is available on PS4 from January 28, 2020.

Journey To The Savage Planet is a fun, arcadey ride with its comedic characters, cartoony art style and unique blend of game genres. Secrets and secondary objectives galore, creative creature design, and a rewarding gameplay loop only add to that ride. Although the co-op disappoints, you shouldn't overlook Typhoon Studios' great first game.