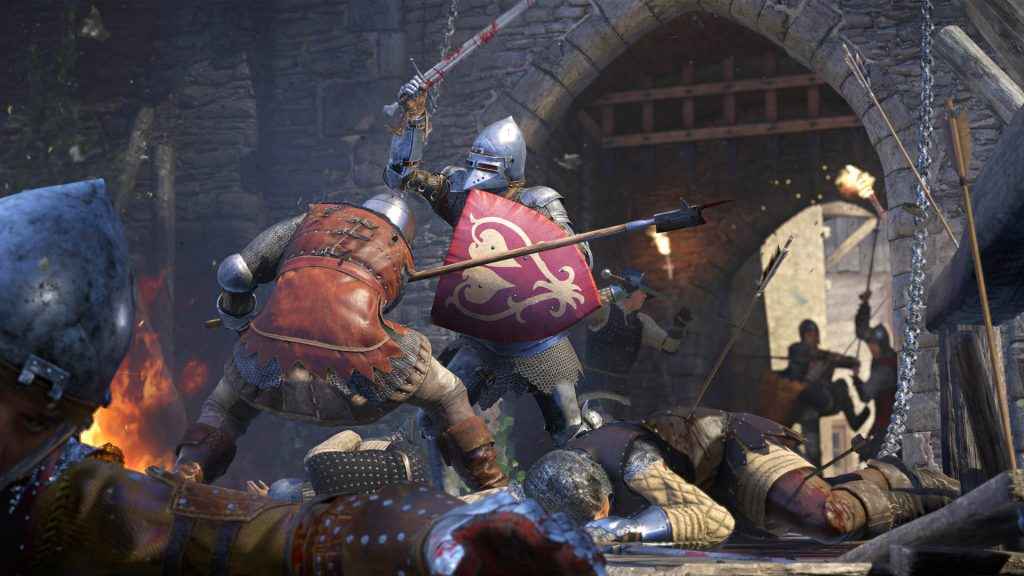 Without sounding too reductive, Kingdom Come Deliverance feels like an Elder Scrolls game; albeit one that has had its fantastical underpinnings shorn and replaced with a bespoke focus on history. Indeed, in Kingdom Come Deliverance, it’s fair to say that it is cartload of fun pretending to be a noble and heroic knight as you traipse around an evocatively detailed rendition of 15th century Bohemia. Well actually, let’s rewind that a little. You see, before I gained knighthood, I spent a great deal of time in Kingdom Come Deliverance being a scumbubble of the highest order. When I wasn’t pickpocketing folk or strangling them and leaving their unconscious form in random places, I would be flinging turds at the side of someone’s house or getting so absolutely drunk that I could barely see.

Eventually once my conscience got the better of me, which did take a good deal of time I’ll grant you, I set out on a path of virtue and began the ascent to something remotely resembling respectability. From here, I joined the town guard, murdered some bandits (took their ears for trophies, too) and even went out on a hunting trip with an insufferably arrogant local lord. In Kingdom Come Deliverance then, Czech developer Warhorse Studios has fashioned an undeniably compelling and attractive medieval sandbox with no shortage of stuff to do, it’s just a shame that the whole affair is rough around the edges in ways that tarnish its otherwise successful attempt at immersing the player into its detailed world.

A first-person open world RPG that boasts an obvious visual and mechanical kinship with Bethesda’s Elder Scrolls games, Kingdom Come Deliverance nonetheless starts out a little different than say The Elder Scrolls V: Skyrim. Beginning with character generation, Kingdom Come Deliverance has you following the cinematic tale of Henry, the son of a master blacksmith who seeks vengeance on the corrupt lords that invaded the otherwise peaceful town of Skalitz, brutally murdering his closest friends and family in the process.

As a result of its uniquely tailored and cinematically driven narrative, character generation in Kingdom Come Deliverance is a world apart from The Elder Scrolls games in that the physical character template cannot be massively changed (there are no other races than human, obviously, and you can’t change the physical dimensions of your character). You do however, answer a series of vocational questions which broadly enhance certain areas of Henry’s makeup that make him more suitable to your own individual playstyle; chatting in a tavern for example increases your speech ability, while saying you work in the forge increases your strength and so on.

Once into the game proper and the initial narrative act and introductory town of Skalitz has been done with, Kingdom Come Deliverance doesn’t take long at all to unfurl the coils of its considerable ambition. With the entirely massive kingdom of Bohemia under your feet, you’re free to do just about anything you like; from roaming the countryside to following the main story and engaging in any one of Kingdom Come’s massive array of side-quests and activities, to say that there is a lot to do and even more to be distracted by would be quite the understatement.

It’s really though in the details where Kingdom Come Deliverance does some of its best work, yet arguably, it’s also within such minutiae that Warhorse Studios inaugural effort threatens to undo itself from time to time, too. Starting with the good stuff, Warhorse Studios clearly has a cadre of highly talented artists at their disposal because the Bohemian game world within which the game takes place is generously stuffed with eye-opening detail and incidentally lifelike flourishes. Certainly, there is an organic look to the formation of Kingdom Come's environments that you just don't see a whole lot of these days; the world looks naturally and believably formed with lush glens, dense forests, trickling streams and more besides rather than being spat out by some sort of sophisticated and emotionless algorithm.

Likewise, the numerous denizens that populate Kingdom Come’s Bohemian realm also do a great deal to help reinforce the notion that players are part of an active, breathing world. Whether you’re observing a couple of tradesmen talking to each other about meeting up later at a tavern before actually going off and doing that, or staring at herds of sheep moving and bleating exactly how you would expect them to, it’s difficult not to become immersed in this realm that Warhorse Studios has created; a fact which is reinforced by the sheer amount of evident research that has gone into the clothes, buildings and environment of the time, too.

From a technical perspective Kingdom Come Deliverance is equal parts impressive and not quite so impressive. Powered by CryEngine3, the visuals are ably given a boost by some tremendous lighting work which ensures that nighttime actually looks like nighttime and the interiors of buildings with their small windows, (as befitting the era) allow very little light in and so, even during the day, folks have to make do with torches and candles to keep things illuminated. Despite the triumphs of its natural geometry and sublime lighting system however, there are a number of technical problems which sour the technical accomplishments seen elsewhere somewhat.

Even running on a PS4 Pro, Kingdom Come Deliverance struggles to maintain a 30 frames per second screen update, and though I don’t have precise metrics at my disposal, I’m fairly sure that in crowded urban areas, the game plummets to between 20-25 frames per second (though the developer has promised improved performance in a future patch). In addition to its relatively unstable framerate, there is also a fair chunk of pop-in whenever the game loads new areas, a range of minor glitches which range from occasional texture flickering to very odd camera angles that forget to show characters when they’re supposed to be on screen and finally the occasional system crash which sometimes rears its ugly head. In short, Kingdom Come Deliverance could certainly do with some more polish.

Away from the game’s technical maladies however, Kingdom Come Deliverance does acquit itself well in numerous other areas, such as how it weaves in skills and abilities into its overarching structure. Take the persuasion ability which sits at the heart of Kingdom Come's conversational interactions, for instance. Though you have varying dialogue choices that you can make during a conversation, each one is affected (adversely or positively) by a number of factors such as your speech ability, your bearing (a strong character might scare some folk off but prompt others to offer risky jobs), and even the way you dress – stay well groomed and the well to do people will be more likely to talk to you, show up in scabby leather armor covered in dried blood however, and the opposite will also be true. Equally, speech also proves instrumental in enhancing your frugality as it directly impacts your ability to haggle every time you buy or sell something from a vendor – something you should be doing all the time as coin is not easy to come by in the early parts of the game.

Similarly to how The Elder Scrolls games award progress in disciplines by getting the player to actually perform actions connected to those same disciplines, so too does Kingdom Come Deliverance deal with progression in a similar way. If you want to learn how to read (lest we forget that a blacksmith’s son would likely be illiterate during this era), you must find a scribe to teach you the basics first before learning and developing your literacy skills on your own steam – reading books increase your skills and thus is a Good Thing to do. Additionally, if you want to get better at horse-riding, herbalism, combat or anything else that requires a practical action (such as consuming alcohol – I kid you not), you simply just have to keep practicing those skills in order for them to develop.

Speaking of combat, Kingdom Come Deliverance deals with violence in an interesting way. Arguably more robust than the combat seen in Bethesda’s Elder Scrolls games, Warhorse Studios have taken inspiration from the first-person scrappery seen in that series and combined it with the more technical and stance driven system seen in Ubisoft’s For Honor. The result is a combat system which requires much more skill to be competent at and one which both looks and feels genuinely satisfying as you learn armor shattering combos, nimble deflections and much more besides.

Still, it seems that for every clutch of good design decisions that Kingdom Come Deliverance boasts, there are a small handful that are poorly thought out by comparison. In this vein, Kingdom Come Deliverance stands as the next in a long line of efforts which proffers an inane and fist bitingly frustrating lockpicking mini game because here, you must turn the lock with the left analogue stick while attempting to find the ‘sweet spot’ with the right in order to be successful. The problem is that not only does it feel nigh on impossible to maintain both sticks at the same time, but the sweet spot itself actually moves, making lockpicking in Kingdom Come Deliverance one of the most infuriating things I have encountered in a long time.

In fact, so frustrating was it that in one situation where I had to retrieve a ring from a strongbox for a quest, rather than using the lockpick to open it, I simply choked the owner unconscious and stole their key; an admirable display of Kingdom Come's scope for creative thinking but a poor one for selling me on the functional efficacy of its lockpicking minigame.

Next in the line of ill-informed design decisions is the bewilderingly strange save system. In Kingdom Come Deliverance if you want to save whenever you want you must purchase (or loot) a single use alcoholic beverage called ‘Saviour Schnapps”, and if you don’t have the cash to do that, you can save when you rest in your bed, or, rely on the autosave whenever you complete a quest. Where things get messy, is that assuming you aren’t particularly flush with cash (as is invariably the case in the early going), you spend most of your time saving by sleeping in your own bed, but as the game does not remind you exactly where that is (it must be your bed and not another bed in the same room) or in some cases fail to provide a fast travel point there, it can become face-clawingly tedious to say the least.

In the end, despite occasional threats to veer into the technical abyss and some bizarre design decisions, Kingdom Come Deliverance ultimately hangs together consistently enough to succeed where it counts the most; in compelling the player ever onward to the conclusion of its 80 hour plus tale of vengeance within a beautifully realized game world.

Kingdom Come Deliverance is a commendably ambitious open world RPG steeped in a real sense of place and grandeur. That said, the experience remains one that is housed inside a beautiful, though imperfect world in which if you can tolerate its shortcomings, you'll find a great deal to do and enjoy.