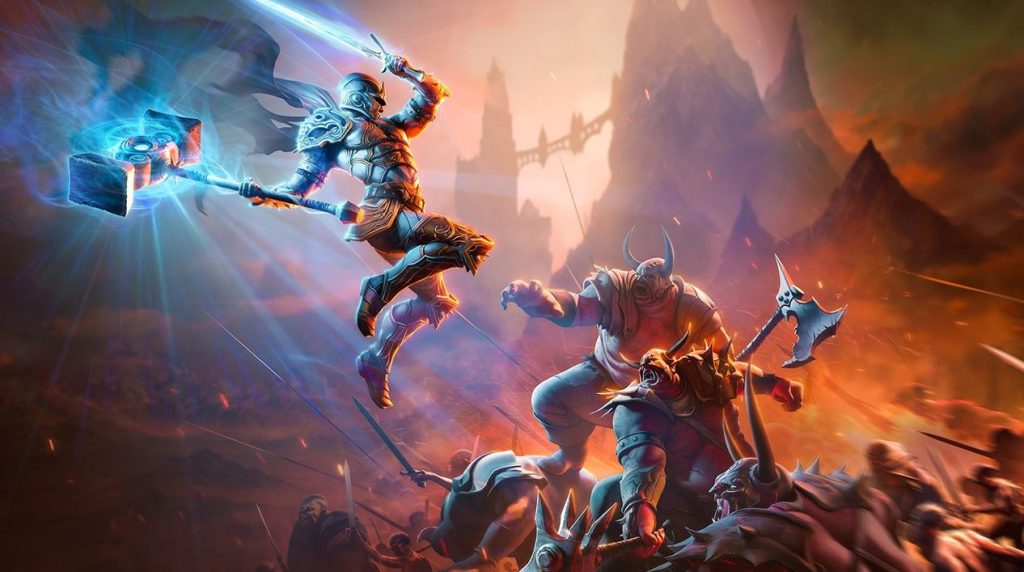 Amalur’s Story Is Vast And Ever-Changing

Reckoning tells the tale of a war between the immortal Fae and mortals trying to settle into their lands. The mortals consist of Humans, Gnomes, and Elves and they are looked down upon by the Fae for having such short life spans. The Fae themselves are not truly immortal though. They can die, but come back to life in a new body to relive the life they just lived over and over. Almost like they live on repeat.

Gadflow the game’s antagonist sees the mortal races as invaders in the Faelands and starts what is called the Crystal War. Though the mortals hold their own, the Fae’s death and rebirth give them a strong advantage as their numbers simply replenish themselves.

The game begins with your created character waking up in a pile of bodies. The Gnomes who are disposing of mortal bodies are surprised to see you alive and believe this is the miracle they have been waiting for to change the tide of the war, as you are the first mortal to return to life after being killed. Much like the Fae. Being a resurrected mortal, you discover that you are not bound to fate and you alone hold the power to change it.

In the world of Amalur, everyone has a fate that they cannot change. Fateweavers: powerful mages who can see a person’s fate are stunned to learn that your character has no fate and can change the fate of others in the world. Those destined to die can be saved based on your actions, which poses a serious threat to all in the world as your character now has free will and isn’t bound by the chains of fate.

Gadflow learns of your resurrection and sends his armies to find and kill you. As he believes his fate of ruling the Faelands is now in jeopardy because of one who is not bound by it.

Build Your Character To Your Play Style

Amalur is an action-RPG and at the start you get to try out all the different weapons and classes the game offers. There are three main classes in Amalur. Warrior, Rogue, and Spellcaster. What makes Amalur so fun to play is that each class is just a blast to experience. The combat works so well that each class just looks badass during combat. The Spellcaster, for example, doesn’t always have to focus on long-range attacks and has some great close-range abilities; the same goes for the other two classes.

Of course, each class comes with its own perks. Rogues are the only ones with access to backstabbing enemies in stealth and stealing items off of living people. The good news is that you don’t have to stick to one class the entire game. If you so choose you can upgrade two or even all three skill trees and have abilities from all of them. It’s actually pretty cool to be a warrior branding a greatsword but also have the ability to attack foes with long-range magic attacks. The skills you acquire are both passive and active. You can map up to eight skills to preform using button combinations for easy access to the skills you use most often.

Combat is quite simple, you simply mash the attack button until your foes are defeated. Of course, you can dodge and block attacks as each class comes with a shield that compliments the class. Combat isn’t complicated and doesn’t require massive combos to preform it sure is fancy to look at. Combat animations are really good and your character always looks cool because of it.

One thing that I wish the remaster implemented was a lock-on button. Sometimes it can get pretty hard to determine just how far an enemy is because of the camera angle and when facing off against multiple foes it would be nice to select the most dangerous foe to attack first rather than the closest enemy which your character will most likely target automatically.

The Faelands are just as much of a character in Amalur as any NPC you encounter. The world itself is vast and even eight years later still quite gorgeous to look at. The Faelands are full of life. You find animals hunting other animals, bandits fighting off some of the more violent creatures in the forests, and guards simply patrolling the roads. Most of the locations you visit are nature-based with vast forests. It can get dull to look at after a while but things open up to more varied locations later into the story.

The land is jam-packed full of secrets. Treasures chests are plentiful, secret Lorestones tell tails of the land, and dungeons are everywhere. Most dungeons are quest-based while others are completely optional.

One thing that hurts exploring the dungeons is their repetition. Though a dungeon layout will be different from one another, the assets and designs are a simple copy and paste job. There were plenty of times where I would walk into a room in a dungeon only to recognize that same room in the last three or four dungeons I explored.

The Faelands are full of people who need help. There are so many quests to take on that it can feel overwhelming at first. What makes most of these quests so frustrating is the length it can take to complete some of them. A quest I acquired in the first couple of hours of the game couldn’t be completed for at least ten hours in. The reason for this is because the location the quest sends me on is so far away that you won’t reach the area for a long time in the story. I could go and complete the quest but I wouldn’t dare take on the foes in the area at my low level.

Bad Inventory Management Is A Pain To Deal With

As an RPG there is a lot for you to do besides questing. Crafting plays a big roll from blacksmithing, creating potions, and crafting gems to equiping armor giving them various added attributes. When crafting, you can simply experiment and combine various crafting materials, but you can also find blueprints and recipes so you won’t have to waste rare materials on experimentation.

The biggest hindrance to Reckoning is the inventory system. At the start, you’ll be limited to only 70 items you can carry. You’re able to upgrade your inventory cap by buying backpacks but they are few and very far between. It’s a massive issue. RPG fans have dealt with inventory management in the past but here it’s almost baffling how it works.

It’s so annoying that I simply just stopped carrying them. I couldn’t go an hour of playing the game without running out of inventory space. Sure I could simply not pick up loot but what’s the point of that. Loot can be sold or salvaged for rare crafting materials, so I was constantly being hindered by something that could have either been refined in a remaster or simply removed altogether.

For a remaster not much has been done to improve the game at least from a remaster standpoint. The game seems to simply be upscaled and the resolution improved but nothing is done to the textures or character models. On the positive side, this may be the only game I’ve played where I didn’t run into any technical issues this generation.

No slowdown, no clipping, no frame drops, no sound issues or graphical glitches. In a way, it was weird to play a game that didn’t have any of these issues simply because it’s become so commonplace in games these days.

One last issue that should have been worked on are the load times. They are so frequent and long, they just ruin the immersion. Simply walking into an Inn it would take about ten seconds to load, then another ten seconds as you leave. They increase with what seems like every new location you enter. What makes it worse is when you begin fast travelling all over the map, which can sometimes take up to twenty seconds to load, it is criminally long and should have been improved on the PlayStation 4.

Amalur Holds Up But Still Falters In Areas

Kingdoms of Amalur Re-Reckoning holds up incredibly well for an eight-year-old game. A vast world full of secrets and quests to complete with entertaining combat, simple yet intuitive skill tree, and crafting systems. Its just a shame not much was done to improve the original’s long and numerous load times and any improvement to the inventory management system would have been very welcome.

Kingdoms of Amalur: Re-Reckoning releases for PS4 on September 8, 2020.

Kingdoms of Amalur: Re-Reckoning is just as fun as it was eight years ago. Though the game didn't get any updates to its inventory management system or the criminally long load times, the combat is still great and the vast world is a blast to explore.