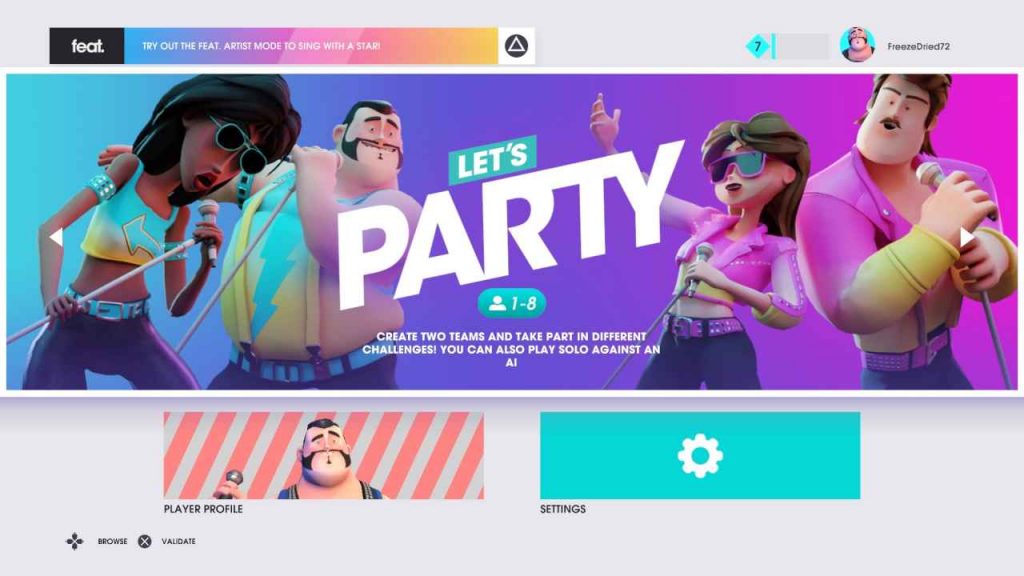 Let’s Sing Queen PS4 Review – I know that this is going to shock a lot of people, but I can’t sing quite as well as Freddie Mercury. Sure, I’ve been known to hop on stage after a few too many beers and gloriously stumble through “Bohemian Rhapsody”. Who hasn’t? My warbling sounds great to me in that drunken moment, but I’m certain that if I ever encountered playback of one my drooling performances, I would immediately put my head under the sofa in shame like a dog that ate the paper towels.

This is why Let’s Sing Queen is such sweet torture. My last experience with Let’s Sing involved my family’s brief but fun dalliance with Let’s Sing Country almost exactly a year ago. But the torment demons at Ravenscourt Games have really upped their game for the pain chamber that is 2020, this time pitting innocent middle-aged dads against possibly the greatest vocalist to ever walk the earth. Of all the weird stuff I do, few things I’ve done have ever made my wife look at me in such a disturbed manner as Let’s Sing Queen. Thanks guys!

I Am Not Freddie Mercury

For those not in the know, the Let’s Sing series allows players to sing along with famous hits, using either a USB microphone or a mobile device (with the free Let’s Sing app installed). You pick a track, which then begins playing – with accompanying hysterically dated video – in the background. In this installation of the long-lived series, you sing along with Queen songs while the game judges your ability to hit notes, stay on rhythm, and sustain those uber-long Freddie Mercury high notes.

Words scroll across the screen along with little note bubbles – which offer vague visual indicators of whether the notes you should sing go up or down. Accuracy (or some facsimile thereof) gains you points, and if you hit enough notes in a row you will gain a multiplier. That’s it, really. There are a number of modes to flesh things out a bit, and a very basic progression system (which mostly unlocks more of those weird little Let’s Sing avatars), but for the most part you are simply singing along with Freddie.

Singing along with Freddie is not nearly as easy as singing along with the country artists in last year’s entry. For the most part, I was able to keep up with the portions of songs where Freddie Mercury sings by himself, but I struggled mightily with some of Queen’s legendary harmonies. I’m not sure exactly what Let’s Sing Queen is looking for, but I can assure the developers that it is impossible to sing five-part harmonies with a single voice box.

Songs like “Bohemian Rhapsody” are an extremely mixed bag, as they vary between Freddie belting out lyrics and more operatic harmony passages. I ended up feeling like a fool oscillating my voice up and down, trying to determine which note the game was looking for. As usual, of course, my seven-year-old daughter can pick up my phone and howl gibberish into the microphone, racking up scores almost as high as mine. So perhaps I am putting too much thought into it.

The Track List Digs Deep Into The Queen Archive

Diving into Let’s Sing Queen without a bit of preparation is very much like jumping headfirst into murky water. You are likely to split your skull open on the rocks of some of Queen’s early 70’s hits. Do you know all the words to 1977’s “Good Old Fashioned Lover Boy”? No? Then expect Let’s Sing Queen to hand over your head on a platter of sadness and failure. There are 30 tracks included in Let’s Sing Queen, and unless you are a Queen superfan, some of these songs are going to be less familiar.

For every “We Will Rock You”, players can expect to stare down the long dark tunnel of a lesser known hit like “Headlong”. Of course, the positive side of this is that committed players will get the chance to learn a lot of new Queen songs they were unfamiliar with. It’s not like Queen was cranking out bad songs all that time. These tracks are fantastic. But that doesn’t change the fact that I knew all the words to around 25% of the tracks, could babble-sing through another 25%, and was utterly lost on the last half. My Queen knowledge is not as strong as I thought.

I think that it is best that folks go into Let’s Sing games knowing what they are getting. If anyone is expecting a super polished experience – something like UbiSoft’s Just Dance games, for example – they should probably lower their expectations a bit. Let’s Sing games are basically a few menus and simple graphics thrown over the top of amusing older music videos. This is a game series that probably drops 80% of its budget into song and video rights, leaving a lot of the UI to be recycled from title to title.

The modes offered are simple affairs; sing along, sing along with bits of different songs mashed together, sing along with Freddie Mercury (which is, you know, what you are doing in every other mode), sing along with someone else’s asynchronous performance to try to beat their score. There’s a lot of singing along.

One feature that seems to be missing this time around is the ability to add Let’s Sing song packs. I bought a few packs last year to make Let’s Sing Country more palatable to myself, and I can’t seem to figure out how to import them. It would be nice if I could gather all of my Let’s Sing content together into one hub, ala Rock Band, but that might be asking too much from this modest series.

That’s Why They Call Me Mister Fahrenheit!

Making jokes about Let’s Sing games is becoming one of my favorite annual pastimes, but that doesn’t mean that I don’t like the games. I come from a family that loves singing karaoke, and you can bet that I’m going to fire this one up at my (probably not gonna happen) Christmas party. There is nothing like eggnog spilling on the carpet while Uncle Joe warbles “I Want To Break Free”.

I’ve really enjoyed my time with Let’s Sing Queen, because Queen songs rock, and I enjoy trying to sing them. My kids adore howling along in the background, and we all love it when my wife slams the door because we are screaming “We Are The Champions” while she is attempting to have a Zoom call with her co-workers.

It’s important to really understand what Let’s Sing games are before dropping any money on them. This is a very niche title, to be sure. But if you like singing, you like Queen, and you want to feel inferior to one of the greatest singers ever, Let’s Sing Queen is a kind of magic. See what I did there?

Let’s Sing Queen is now available on the PlayStation Store.

Do you think you know all the words to Killer Queen? You probably do not, and Freddie Mercury almost assuredly sings it better. That doesn’t mean that it isn’t fun to try. Let’s Sing Queen has a great, deep track list and offers some simple fun. If you enjoy hyper difficult karaoke, you’ll get a kick out of this title. Warning: "Under Pressure" is much more difficult than you think it is.