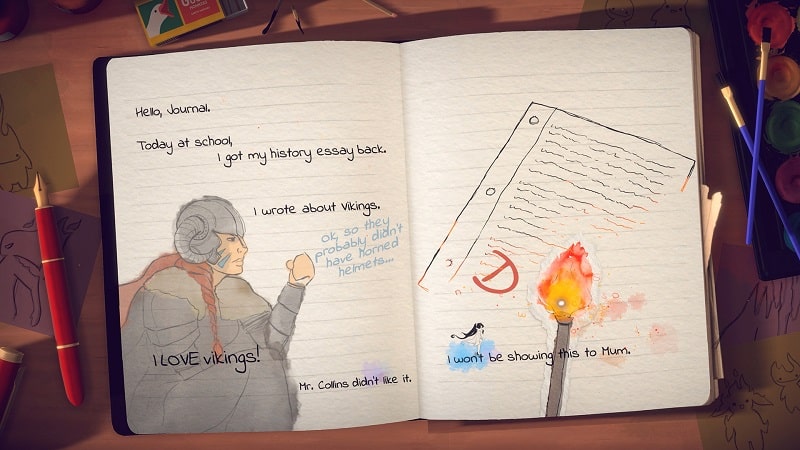 Wrapped around this heady and emotionally intoxicating premise is Lost Words’ relatively simplistic platformer design DNA that arguably marks it more as an offering for the younger folk than perhaps anybody else. However, going back to my first words on this surprisingly affecting offering, Lost Words: Beyond The Page is able to affect players of all ages in a manner that is far more significant, poignant and enduring than its rudimentary platformer beats might otherwise allow it to.

Lost Words: Beyond The Page is split into two halves which alternate from the beginning of the game to the end. As Izzy, a headstrong teenager aspiring to be a writer who loves her dear old grandma very much, we see our plucky heroine recording her memories and experiences of everyday life in her journal. In gameplay terms, these sections unfold as a basic platformer where you must navigate your way around platforms constructed out of words, re-positioning certain phrases to allow you to reach normally inaccessible areas and so on. It’s basic stuff that feels tailor made for the younger folk for sure. 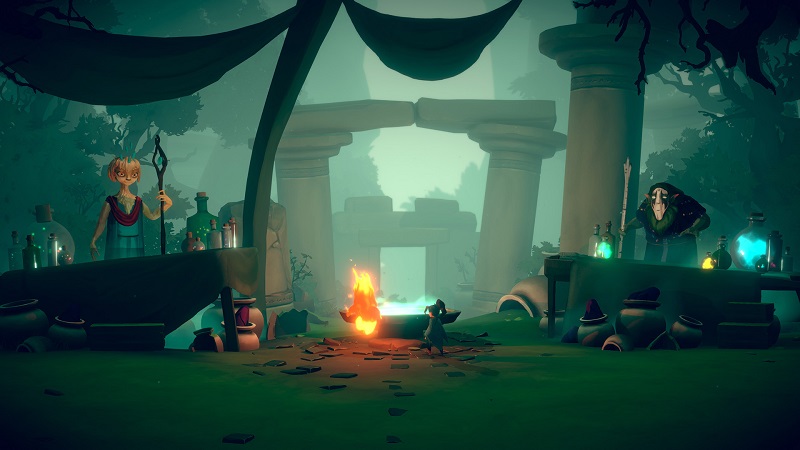 Despite how perfunctory such platforming might seem however, it’s the dramatic audiovisual flourishes that really make these sections come to life. As a fantastical version of Izzy hops around the lines and margins of each page, words break down and shatter under her footsteps, while pastel coloured flowers explode across the page creating painterly scenes that each evoke a memory Izzy has of her family. It’s stirringly beautiful stuff, certainly.

A Stirring Meditation On Love, Family And Loss Wrapped Around A Simplistic Platformer

The other half of the Lost Words experience is when you take control of the character in Izzy’s fanciful tale about a young heroine who uses the power of words in an attempt to save her village. Marking a shift to a completely different art style as a means to draw a distinction between the fantastical and ‘real’ realms, these sections have players venturing into deep forests, across towering mountain peaks and down in the depths of the ocean, as they seek to reclaim the missing fireflies from our protagonist’s village all the while seeking out a mysterious dragon that has laid waste to everything in its path.

Slightly more complex than the journal hopping sections that often precede them, the fantasy levels in Lost Words once again embrace a platforming design blueprint. Presented as a series of traditional scrolling stages, Izzy’s journal bound hero can run, leap and push blocks in the sort of fashion that many of us have been exposed to for decades now. Strictly perfunctory, the platforming in Lost Words feels fine for the most part and that’s honestly as good as it gets. 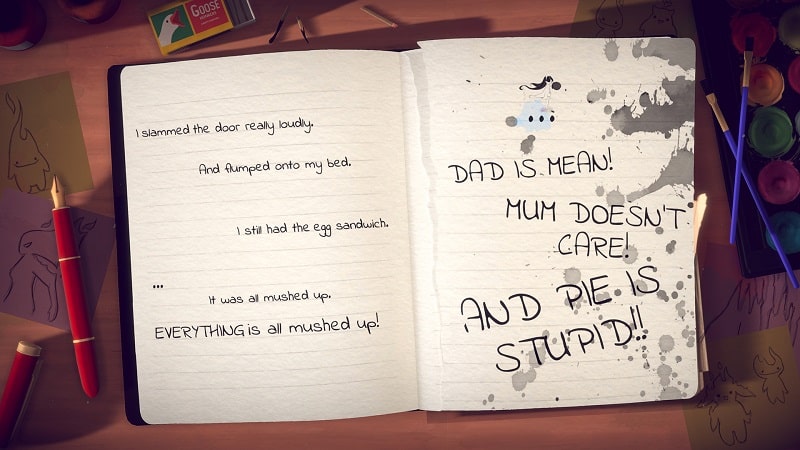 In addition to a slightly distracting floatiness to the platforming and our heroine occasionally getting stuck on the scenery, Lost Words has a 30 frames per second target too, making every leap and bound a little less precise and responsive than perhaps they would be in other games of a similar ilk.

However, a wrinkle to the formula is that our heroine can use special power words to affect the environment in different ways in order to allow her to progress. For example, the power word ‘rise’ could be used to raise a portcullis or elevate a column of stone to allow you to reach higher places, while conversely ‘repair’ might be employed to fix a broken bridge, allowing you to cross to the other side.

While innovative, it’s a shame that more hasn’t been done with this otherwise hugely compelling feature. With just six power words available (and you don’t get access to all six until right at the end of the game), there isn’t a whole lot of variety in regard to the power words you have access to. Equally, the situations in which you use these power words tend to be fairly straightforward, single use exercises that rarely require you to combine the words together to overcome more sophisticated conundrums. Furthermore, there’s no real fail state to speak of in Lost Words as ‘dying’ (often by falling into a pit), simply just whisks you back to where you died in just a second or two. 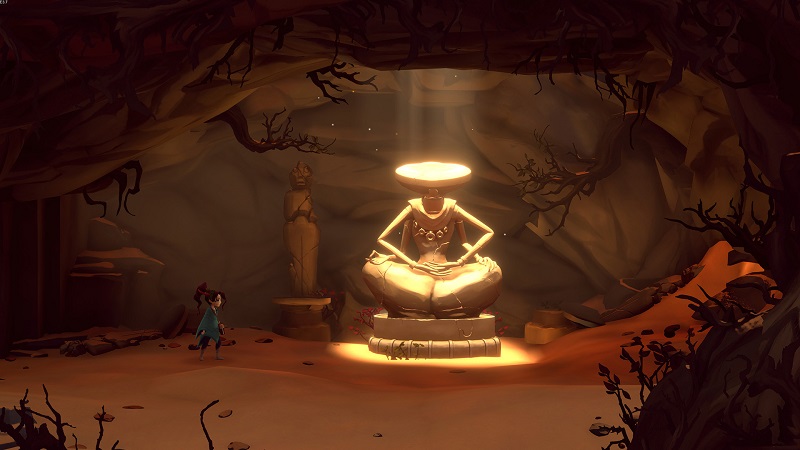 Again, such a low difficulty level points to a game that is arguably much more suited from a gameplay standpoint to kids and other assorted younger folk, than it is perhaps to more wizened gamers – the complete absence of any kind of combat also serves to reinforce its suitability. However, while the actual gameplay offering in Lost Words might be overly simplistic for teens and adults, and its duration relatively brief (the game can be completed in around four hours in a single sitting), it’s fair to say that Lost Words bounty lay in its emotional and wholesome narrative that it manages to impart to the player with delicate verve.

In large part developer Sketchbook Games achieves this not just through the audiovisual presentation of the game, but also in terms of how the two realms co-exist, with one often mirroring the events of the other in metaphorical and figurative ways. Really though, it’s the sumptuous score and tremendous voice acting that really help Lost Words dig itself deep into your emotions.

Anchored by an absolutely stellar performance by Sidonie Maria Sakalis, the plight of Izzy and her storybook heroine is really a soul and an enduring sparkle of innocence that makes her immediately likeable. More than that, Sakalis also does a fantastic job of evoking empathy during Izzy’s lowest moments with an emotionally affecting and passionate performance that underscores the wholesome heart of gold that beats at the heart of Lost Words. 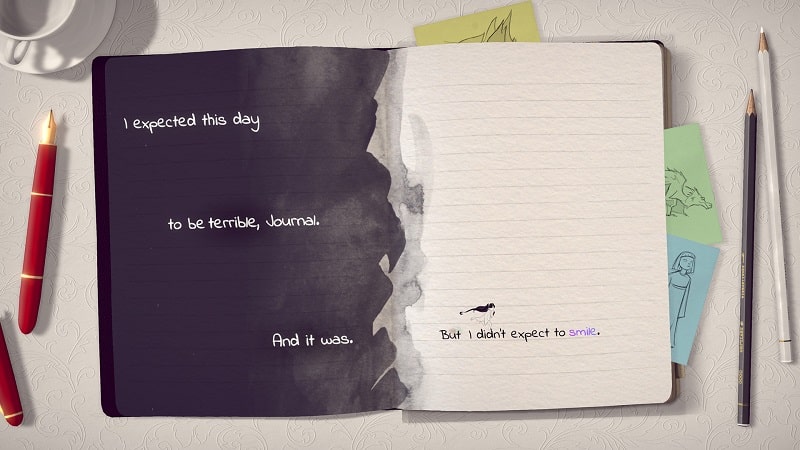 Ultimately, Lost Words: Beyond The Page is the sort of sensitive and kind odyssey the likes of which we see far too few of these days. Though the game might lack challenge, a degree sophistication and replay value (outside of scooping up the fireflies which are the single collectible in the game, there is nothing else to really do), it’s more than worth the price of admission thanks to how delicately it wields and deals with such weighty themes as loss, love and family.

A great little game for younger folk and also for older gamers who want a bit of heart and soul in their game, Lost Words: Beyond The Page presents a surprisingly poignant meditation on grief, loss, love and memory. Something that all of us, at some point or another, will have to confront. Sure, it’s not technically perfect and the platforming is a bit ropey in places but Lost Words: Beyond The Page was just what I needed and perhaps, without knowing it until now, this is exactly what you needed too.

A simple platformer bolstered by a beautifully delicate meditation on family, love, remembrance and loss told through the prism of young girl, Lost Words: Beyond The Page might not have much to offer the genre at large, but it resolutely crafts an experience that lingers long after the stylish credits have completed their inexorable ascent.

Lost Words: Beyond The Page