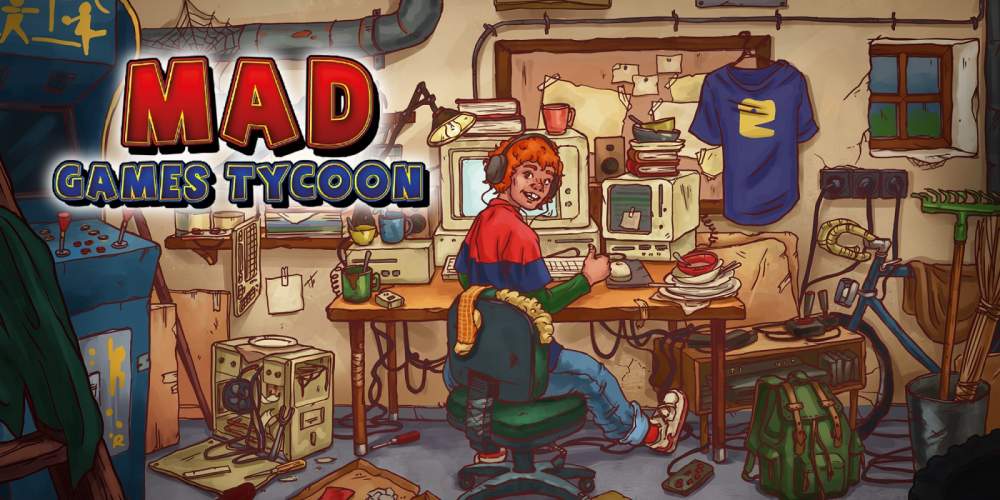 Not every game has to be a bang-bang shooter, an open-world RPG or a rogue-like Metroidvania. Sometimes it’s very satisfying to build something from scratch, to micromanage everything from within and create a well-oiled commercial machine. Game developer sims have been around a quite a while and have had varying amounts of success. I remember not being able to look up from my phone for weeks when I was a little bit addicted to Game Dev Story from Kairosoft, for example.

Mad Games Tycoon has no story to speak of at all and it is exactly as you would expect it to be. Just build, expand, make games, expand and make more games. Sick of waiting for Half-Life 3? Want to make a Tony Hawks 5 that isn’t rubbish? Now is your chance. Think you are the next Naughty Dog? Prove it. It is not as easy as you think though, I suffered a lot in the early game learning mechanics, throwing money down the drain and it was certainly a tough road early on.

There are a lot of systems, dependencies and research to get your head around and it took me a few hours to work out what everything was. There is a massive cavern of depth underneath the surface of this game and there is a lot more to it than I was initially expecting. I did not appreciate it straight out of the gates but I ended up playing it for hours on end and eventually enjoyed what it had to offer. Just when you think you are succeeding and after you have made a hit video-game, you make a dud and you are back to square one. It is a game about learning from your mistakes.

The list of things you have to manage is insane. Patches, advertising, staff, office layouts, research, dev kits and everything else you can think of. You can even get into things like sale bundles, remastering your games and running video game competitions. Once you start expanding, buying more offices and creating more things your studio can do, it gets quite addictive. That is until your next game is a flop, you lose all your cash and you are trying to rush out a patch of new content to try and claw back some of that lost moolah. Sounds a bit like Fallout 76, doesn’t it?

Research in this game is king, everything has to be researched, from new graphics styles to new genres and even new sub-genres have to be investigated. It is wise to have a few research analysts and have them constantly beavering away, they will be extremely overworked but it will be worth it. You need to be on the cusp of the next big game and you can only do that by doing constant research into new technologies and game styles.

When you design your game there are a lot of options you need to ponder over. Its a minefield of things that can make or break your upcoming title. What age range is it for? How much of your resources are you dedicating to each part? What systems will it be available on? What engine will it run on? Will you build your own engine for it? You start small but eventually, you will have a wealth of options to choose from, they all need to be researched and facilitated for accordingly.

Gyro-Mouse is a Genius Idea

Mad Games Tycoon is developed by Eggcode and has been out on PC since 2016. These games always seem more suited to PC play due to the control scheme; designing office layouts is a lot less cumbersome with a keyboard and mouse. It’s always interesting seeing how a developer gets over the challenge of translating design tools to work on a console controller.

One of the first things I noticed when I started is that you can move your pointer with the gyro sensor on the Dualshock 4 controller, that is certainly one way to get over the lack of mouse control. To my surprise, it works very well indeed. It meant I could sometimes play with one hand, leaving my other hand to focus on other things like eating or changing the TV channel. Mad Games Tycoon is a good game to play while watching football or doing other tasks simultaneously due to sometimes having downtime while things get finished.

You can tell from the off that this game started life as a PC game, the UI and all the systems are very PC orientated. I found the whole thing a bit fiddly and clumsy to start with. I would select the wrong menu or click the incorrect option but I did eventually overcome this small issue and it did not bother me after that. The game could have perhaps done with a bit more work to make the controls and UI more console friendly, I can see people getting a little frustrated with them initially.

Sometimes UI elements would obscure other parts of the screen, seldom I would end up moving objects by accident and when all your workers are bashing away at their keyboards it was hard to tell what everyone was doing due to the massive pop-ups over their head. When you have a massive office and loads of employees working on different projects, a nicer, tidier UI would have been a huge bonus and helped the game massively.

One thing that made me chuckle throughout was this games constant use of real-world video game properties, companies and consoles without using their actual names. I enjoyed it way more than I perhaps should have. Want to develop for the Siga Master Station? You can. Want Romedie or Ibusoft to publish your game? They can. Even when you auto-name your games, you get thrown some classics like Set Pack Radio, Housevania, Next to the Last Fantasy or Front of the Colossus. This part of the game is completely brilliant and it kept me constantly entertained.

Early Stumbles Pay Off in The End

Overall I enjoyed my time with Mad Games Tycoon. Yes, I had issues with the UI and the controls but I worked them out and they did not mar the fun I had making my own games. There is a lot of depth, perhaps too much depth for some players and it can be overwhelming to start with. The tutorial does its job well enough but I felt it could have helped you a bit more with some of the advanced features. Things like designing your own console or game engine and the benefits of doing so are not explained well enough.

If you are in the market for a sim or a management game then Mad Games Tycoon is something you should consider. It is fun, very rewarding and once you get over all the various systems in place, is very enjoyable. Its graphics and sound are not the best but it definitely shines brighter in other areas. Give it a shot and see if you can make the next Dark Souls, or is that Black Souls? Or Dark Ghosts, or something of that nature.

Mad Games Tycoon will be available on November 12th for the PlayStation 4.

After the initial UI and control issues are negotiated, you are left with an addictive and very deep management sim. Its graphics and sound could certainly be better but the important parts of Mad Games Tycoon function well enough. It becomes enjoyable and rewarding when you have learned how all the systems fit together and how to make successful games. If you are into these management-style games, Mad Games Tycoon does have something to offer. Just be prepared to put in the legwork early on.