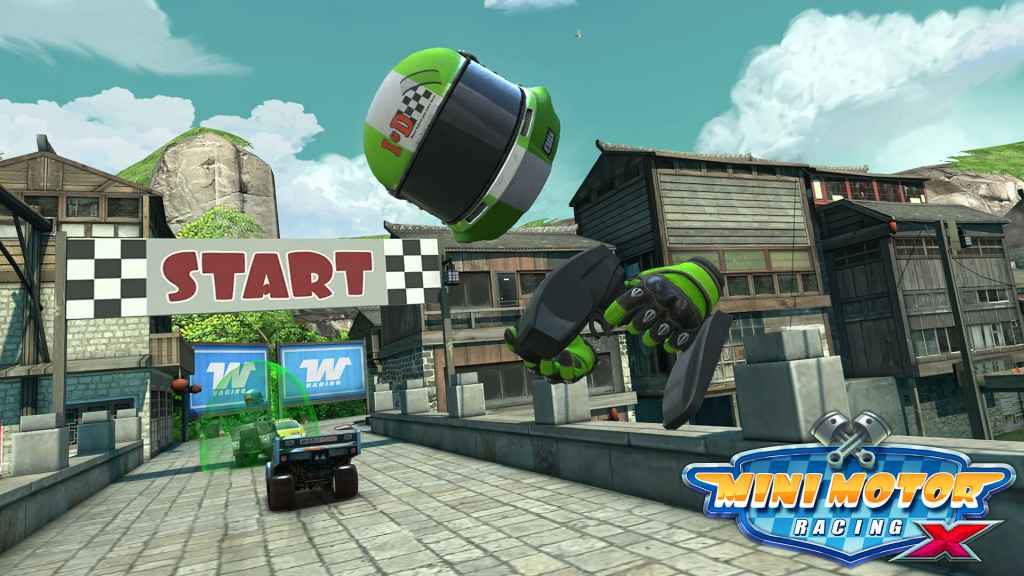 Mini Motor Racing X is a perfect example of what I like to call a “lazy Sunday afternoon game”. This is the sort of game that you pop on after breakfast on a lazy Sunday morning, wanting to kill a few minutes before you get cleaned up and set about being productive. The next thing you know, someone is telling you that it’s dinner time, and the sun is going down.

With Mini Motor Racing X, what begins as “a couple of quick races” insidiously becomes an all-day marathon, as the player is caught in a delightful endless loop of play and reward. The pursuit of that next car unlock (or the money to upgrade it) can easily quickly chew hours off of your day. Sometimes simple things are the most satisfying. And in this case, “simple” equals “accessible”, which can be just what the videogame doctor ordered.

The folks at development house The Binary Mill clearly know that the arcade-style RC racing at the core of Mini Motor Racing X is rock solid. As it has been producing Mini Motor Racing games on mobile for many years, The Binary Mill has had time to perfect their hypnotic game loop in that space. (Get used to the name of the developer – it is positively slathered on every available surface in the game).

All of the addictive properties of a mobile game are still present in Mini Motor Racing X, but the gross goopy mobile monetization has been wiped away, leaving behind a shining diamond of gameplay. Not having to worry about gems or micro-transactions is a great relief. Mini Motor Racing X has all of the accessibility and fun of a mobile title, with none of the nonsense.

Players can earn a wide array of vehicles in Mini Motor Racing X, each of which has its own specs. There is none of that “re-skinning the same car” nonsense going on here – each of these little vehicles feels distinct from the others in both style and performance. After you gain each original vehicle, you can spend in-game cash building up that car’s handling, speed, acceleration and the number of nitro boosts it carries. Different cars have different strengths, so it definitely pays to build up a strong stable.

Everything Mini Motor Racing X has to offer is earned in-game, through a simple system of making money by winning races. If you are ever short on cash, going back to earlier races to grind is a breeze, as some races can be completed in around 45 seconds. This never feels like backtracking – I was glad to be able to go back for some quick runs to build up my little cars and trucks.

Races are run on tiny looping tracks, and players can usually make it around the circuit in around 15 seconds or so. This is definitely a game where practice makes perfect, as tracks are easily memorized, allowing players to spend time finding the precise line needed to smoke their opponents. However, there are so many tracks (many of which also have night and backwards modes) that it will take you quite some time to see them all, let alone master them.

There are so many game modes in Mini Motor Racing X that it is tough to figure out where to start. I decided to hop into career mode to get started, and it turned out to be a great choice. There are five levels of difficulty in career mode, each being earned by winning the one before it. Each difficulty consists of somewhere between 40 and 60 races. That might seem like enough content, but Mini Motor Racing X is just getting started. Dig a little deeper, and you will see that the initial career mode is just the tip of the racing iceberg.

In addition to the standard career, the “X” career has just as much content, but is completely remixed with the new weapon functionality (more on that in a bit). While The Binary Mill could have just cloned the career mode, they took the time to vary the experience, making “X” mode feel unique. Different tracks, different opponents, different order. This essentially doubles the amount of content.

On top of all that, there are multiplayer races, the co-op career mode, and the Rocket League-like “Bumper Ball”. All of this content is incredibly customizable. Mini Motor Racing X is absolutely committed to allowing you to play however you want.

Do you want to add another player to your career in the middle and keep playing in co-op? Fine. Want to jump into VR and race against your friends online, even if they are playing the flat version? No problem. Want to put together an eight-man Bumper Ball match? Why are you even asking? Just do it. Heck, you can even jump into multiplayer mode by yourself and snag the multiplayer trophies by racing against the AI.

This level of customization does come with a bit of UI complexity – be prepared to spend a bit of time futzing around with the in-game menus to attain the configuration that you are trying to set-up. But for the most part, if you can imagine it, it can be done. I haven’t even touched on the number of camera options available. Mini Motor Racing says “yes” to almost everything.

As I mentioned above, the “X” career is new to the Mini Motor Racing franchise. The “X’ signifies the addition of Mario Kart-style weapons to the proceedings. While I appreciate the amount of content that the X career adds to the overall game, the weapon selection and the execution of in-game weapon usage are a bit underwhelming.

In order to understand why the weapons are weird in Mini Motor Racing X, you must first understand the Nitro system (it’s pretty simple – stick with me here). Each car starts with a set number of nitro boosts at the beginning of a race. Nitro is deployed by pressing the “X” button on the DualShock, and after you have fired some off, you can always replenish it by picking up one of the fairly generous on-track drops.

The issue is this – you pick up one of the four weapons each time you do a lap around the track. Passing the starting line will drop a missile, shield, or landmine into your inventory (strangely, I never got the fourth type – the tornado). But – here is the catch: You fire off the weapon with the “X” button, meaning that you have to get rid of it before you can use your nitro.

This led to a lot of situations where I needed my nitro but firing my weapon didn’t make sense. But being forced, I went ahead and sacrificed the weapon just to gain access to my nitro. Simply mapping the weapon to another face button would represent quite an improvement. Additionally, the weapon selection feels very, very basic. And while it is nice to be able to blast the chump in front of you, I rarely ran into situations when either using or being on the receiving end of a weapon made much of a difference in the over-all outcome of the race.

But my issues with the weapons are really just nitpicking – I’ve been having a great time with Mini Motor Racing X (and no, I haven’t finished it. The careers are positively massive.) My son and I spent most of the weekend passing the controller back and forth while knocking out races and upgrading our vehicles, and had a blast doing so.

With racing games becoming more and more complex, as a casual fan I have a hard time committing enough time to newer titles to become competitive. Games like Mini Motor Racing X deliver a digestible experience, which allows me to get that racing rush while still indulging a blast of nostalgia for some of my favorite old RC racing titles.

If you enjoy casual racing, or if you are simply looking for a PSVR title with some meat on its bones, you can’t go wrong with Mini Motor Racing X. Reserve a couple of quiet Sunday afternoons, grab a bowl of popcorn, and race until your eyes bleed. Mini Motor Racing X is video game racing stripped down to its deepest core, and you can’t get much better than that.

Equally playable in VR and flat, Mini Motor Racing X has is RC racing stripped down to its essential, accessible core, and is all the better for avoiding needless complications. While the new weapons could use a bit of spit and polish to become relevant, the overall game doesn’t suffer. With a ton of content and an incredible amount of customization, Mini Motor Racing X says “yes” to pretty much any way you want to play. Addictive and fun.