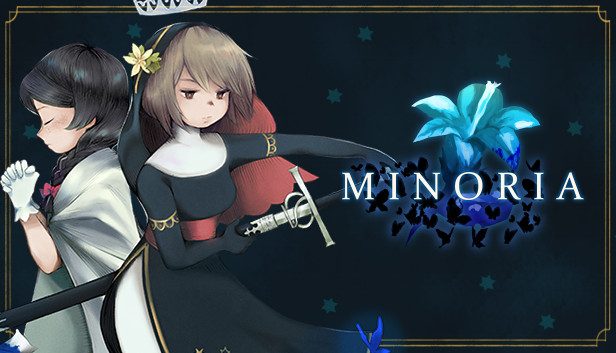 Minoria PS4 Review – Bombservice has been developing games for the Momodora franchise for the last ten years. However, they only started developing for home consoles with Minoria: Reverie Under the Sun in 2016. Now, Bombservice completed a brand new title called Minoria, utilizing similar aesthetics and mechanics found in the Momodora series.

Minoria Plays to Its Strengths

You play as Sister Semilla and find yourself in the aftermath of a witch attack. The entire church population has been slaughtered, leaving you two as the only remaining nuns left. It’s up to you to clear out the witch invasion.

The first point I want to make pertains to the Minoria’s soundtrack. It behaves entirely as background music to the game proper and it hangs heavy with an overarching melancholy that I simply cannot get enough of. Much like the game itself, the music is far from a technical marvel. Equally so, its simplicity portrays more of a minimalist style rather than being complicated or technically profound. Accessibility plays a large role in Minoria. Combat is simplistic, demanding little in terms of understanding the mechanics of the game. Difficulty rolls into this as well, asking for some skill without overdoing it. I downed most bosses in one or two attempts.

The Metroidvania aspect of Minoria also contributes to the game’s accessibility. The maps, which are 2D eye candy, limit the amount of ground you need to cover. Within that smaller space lay multiple ink vials, which act as save points and places to fill up reagents and health automatically. Some exchanges are more challenging than others, but there was never a point where I felt unable to heal myself or continue moving forward.

The narrative benefits from this approach as well. Many of the more significant fights feature in-battle sequences that detail the boss’ circumstances or motivations in the grand scheme of things. These contribute greatly to the mythos and pathos of the game very well. The focus of the entire game plays well into its hand as it plays to its strengths the entire time.

Every Strength Has Weakness

This approach of focusing on the best parts of the game does come with its own negatives. The biggest one came with general enemy difficulty. The map allows for multiple ways to approach different areas, and this often results in your popping up behind enemies. Instead of them responding differently to you, they wait until you either run into them or hit them.

This would be a neat approach if the AI were more cognizant of the world proper. I come to this point because multiple enemies facing the other direction will not respond to one of the enemies taking damage, retaliating, making noise, etc. They just stand there while their ally gets killed. This still plays into the main intention that Minoria has, but this level of ease quickly lessens the intensity of combat.

Overall progression stays very much in the background. You gain levels via experience yielded by fallen enemies and your hidden stats increase as you level. In theory, you can farm new areas for a little bit, get some extra levels, and clear out all enemies with little effort. This point is neither positive nor negative simply because I rather enjoy a Metroidvania every once in a while that offers a progressive experience with just enough challenge to keep me interested.

At the same time, many areas quickly become borderline mindless in how they’re completed. It doesn’t take more than 10 minutes before I’m powerful enough to blow through a new area with minimal effort. Combine that with a counter function, which sees Semilla go invisible and land massive damage on everyone on-screen, and farming XP becomes as easy as walking around. There’s some timing involved, but very little of the game taxes you.

Minoria’s Accessibility Both Benefit and Hinder

Games like Minoria always leave me sitting on the fence, wondering how I should describe it to people. On the one hand, it never gets in your way as you progress. On the other hand, its simplicity borders on mindless from time to time. Minoria fills a void between games very well with a style all its own, but it might not be the kind of Metroidvania that genre fans yearn for.

Minoria is available now on PS4.

Minoria offers up an interesting story all its own that is contributed to with both dialogue and world-building. The lack of significant difficulty and limited AI make this an especially simple game. At the same time, the simplicity allows for an accessible narrative with little in the way. Minoria has the potential to be a good Metroidvania, but its simplicity makes it more of a filler game than a must-own.