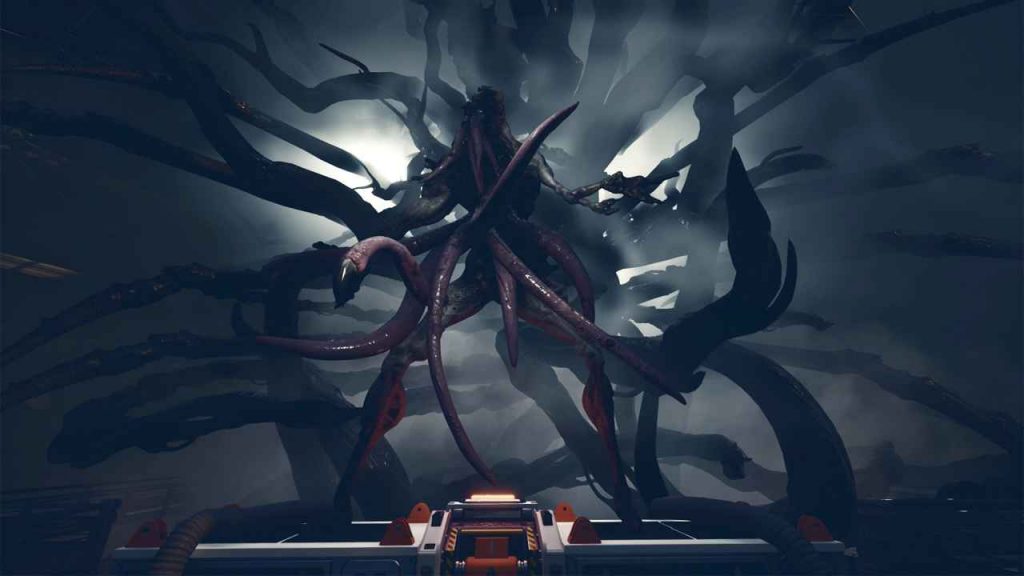 Moons of Madness gets off to an extremely promising start. Players inhabit the role of Shane, an astronaut/terraformer living in a habitat on Mars. As Shane wakes from a spooky dream, he gets his bearings and sets about getting started on his workday. These are some of Moons of Madness’ strongest moments.

Shane wanders about the habitat, chatting over radio with his unseen coworkers, and performing the tasks needed to keep the place going. It’s never overtly stated, but Shane seems like a handyman – the sort of specialized labor needed to keep the oxygen in and the Mars-iness out. His job is to keep the lights on while his team waits for the arrival of a ship carrying supplies and replacement workers, and he goes about that job with workmanlike responsibility.

The Setting In Moons Of Madness Is Incredibly Strong

The initial setting in Moons of Madness is impressively immersive. This is not a little Matt Damon-style tent/shelter that these people inhabit. This Mars habitat has clearly been there a while, and its inhabitants have settled in for the long haul.

The kitchen is stocked with coffee grinders, hotel-style cereal dispensers, and huge metal ovens. This habitat has been on Mars long enough to have shelves packed with paper books. There are levels and sublevels. The place is huge, and wandering its halls, I often found myself wondering how these people managed to get all this crap to Mars.

Shane’s world extends beyond the habitat. Very early in the game, he is sent out to align some malfunctioning satellite dishes. Shane leaves through an airlock, with the player having to don a spacesuit, fill their oxygen, lock the inner door, expel the atmosphere, and then leave through the outer door.

This series of actions is repeated several times, and rather than becoming a chore, the ritual helps sell the reality that this guy is in space, and in space people must be careful. Several times while aligning the satellite dishes, I had to stop and fill Shane’s oxygen. Not that he was in any danger, it was just a thing I had to do to keep going. Because, you know, Mars. It’s a nice touch.

More Than Other Horror Games, I Didn’t Want The Horror

Though there were hints during this sequence that things were going off the rails, I didn’t want to face the reality that this was going to turn into a horror game. The design of the Mars station was so strong, and the performances of the voice actors was so good, that I found myself wishing that this was just a Mars survival game.

I enjoyed the early puzzles, with Shane finding various pieces of equipment to do his job. I liked the other characters. So, when the inevitable tentacles start appearing around the edges of Shane’s vision, my heart began to sink. The horror elements in Moons of Madness are well done, but with the recent glut of Lovecraft horror titles, they feel awfully familiar.

But still, I was happy to see all of the familiar talk of “gaping maws”, “staring into the abyss” and “bathing in the filth” in this nicely rendered new environment. This was a new take on Lovecraftian horror, creeping fear in a new suit. But then Moons of Madness takes a turn, and through its own trippy logic, leaves the space station behind for a while. And while these story beats worked in context, I just didn’t want to slog through them.

I didn’t want to wander the underground network of caves, powering mysterious orbs with my mind. I certainly didn’t want to explore Shane’s childhood basement, searching for photos and runes among the boxes and hot water heaters. I wanted to be back in the nicely designed Mars rover, heading out to check on some power couplings or something.

But towards the end of the game, Moons of Madness circles back around to the Mars station, the story stops meandering, and the game locks in for a strong ending. It turned out that all of the wandering was leading up to something, but I couldn’t help but wish that the game was a little tighter. It took me about eight hours to get through Moons of Madness; I would have been happy with around six. Maybe I’m just spoiled by the brevity of PSVR games.

There Is A Lot Of Good Stuff Here

Beyond my complaints, there are a lot of things in Moons of Madness to be enjoyed. For example, while I didn’t love the story, I did rather enjoy the writing. The characters in Moons of Madness sound like real people when the speak (until they don’t). The notes Shane finds lying around are interesting and well-written, helping to flesh out the world these workers inhabit. I found myself actually reading them, which is rare for me.

I also really enjoyed the visuals. Moons of Madness is a nice-looking game. Beyond the stellar design of the future-NASA habitat, the other environments are all realistic and nicely lit. Moons of Madness sidesteps the usual indie downfall of weird-looking human characters by not really showing any. The few times someone does appear, they are awash in dreamlike lighting and slithering worminess.

The puzzles are decent, and the music is pretty good too. I don’t want to give the impression that I actively disliked Moons of Madness. There was just something about it that never quite clicked for me. In the end, I felt that Moons of Madness was a standard horror title wearing the skin of a stellar science fiction game. As the game wore on, I found myself wishing that it had stuck to its science fiction beginnings, and jettisoned Cthulhu out the airlock.

Moons of Madness is now available on the PlayStation Store.

Moons of Madness is an okay horror game couched within a super science fiction game. While this identity crisis may be a bit off-putting (and there are a few sections of the game that make you wish it would just get on with it), there is some fun to be had with the nice visuals, great writing, and solid puzzles. If there weren’t so much Cthulhu, this would have been an even better game.