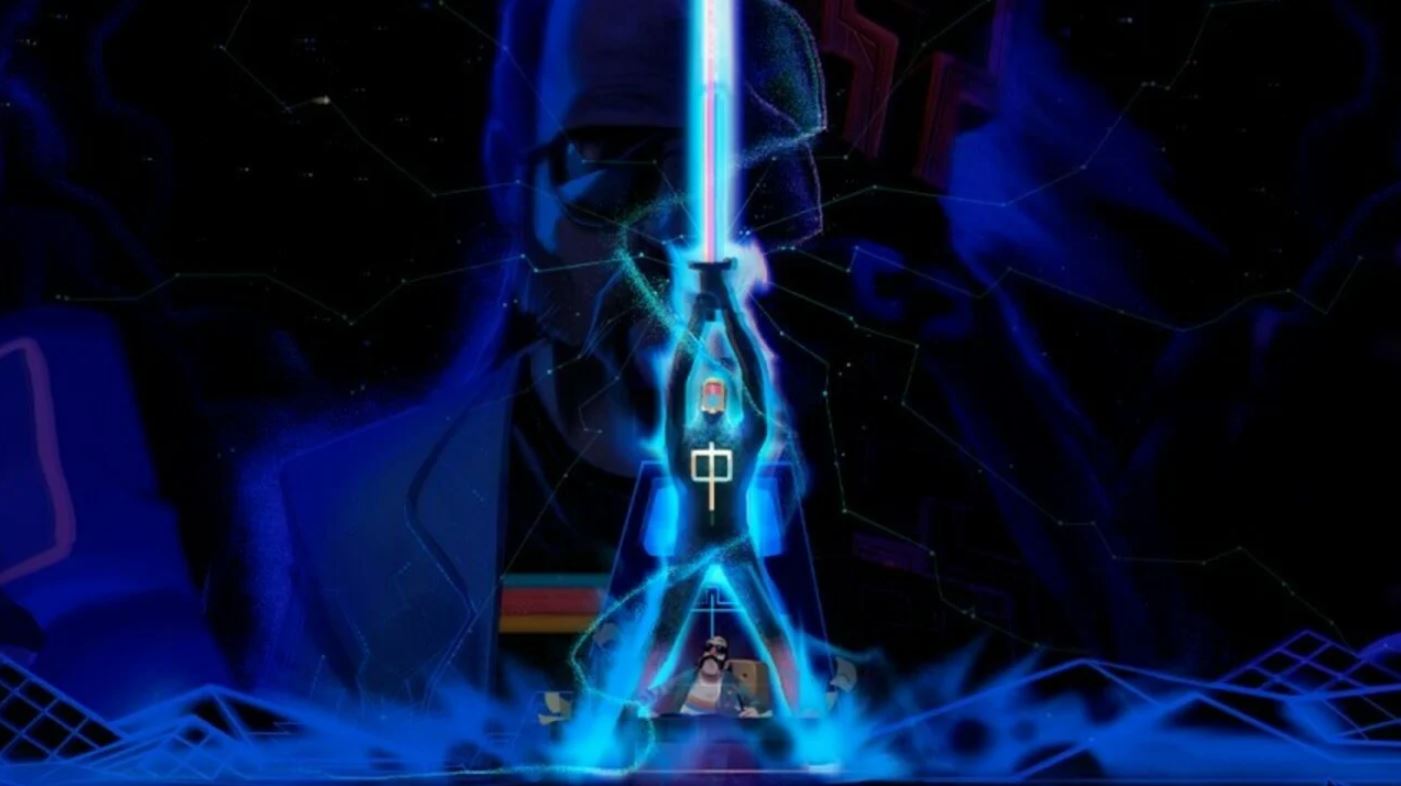 Narita Boy PS4 Review – You know when an artist comes along and you listen to their breakout track and think “wow, I have never heard anything like this before”? Well, Narita Boy is the game that imbues that feeling into you from the moment you hit the main menu and never lets up, creating a kingdom built and infused with retro style. This commitment to its aesthetic helps it stand out and shine, despite some game design tropes and faults.

A Digital Kingdom To Save

Narita Boy is a game where you are placed inside a vast digital kingdom as a chosen warrior who can wield the mythical Techno-Sword. With this weapon and the assistance of the Motherboard (the Digital Kingdom’s spiritual leader) you go out and try to stop rogue code from invading, whilst restoring the memories of the creator of this kingdom. 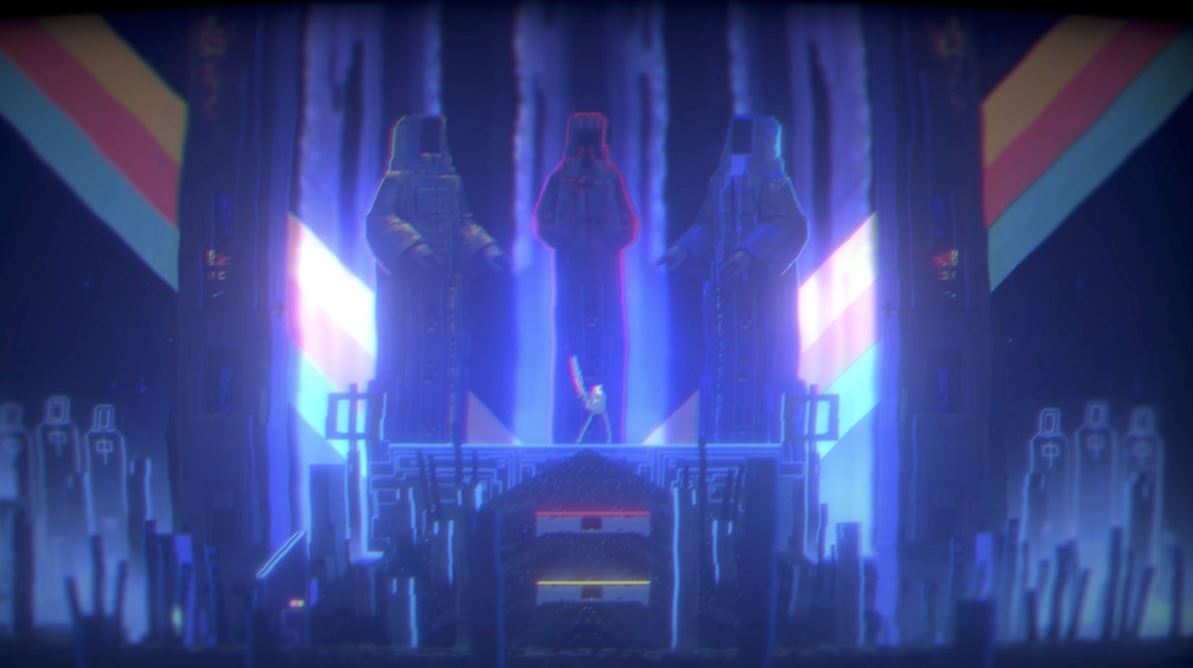 The whole narrative set up and the way it is presented in the game is extremely mythical. As you explore, you come across a variety of figures and characters that feel like Greek Gods as they tower above you and conduct all kinds of rituals to keep this kingdom running.

Their boxy-design makes everything feel so alien and it quite literally feels like you have slipped into a myth or one of Lovecraft’s stories, where everything is an unknown to you and you are captivated by that fact.

This feeling is then accentuated by the fact that the game makes it look like you are playing on an old CRT monitor. Narita Boy really commits to its vision and imbues it within every aspect of the world.

When it comes to the most attention-grabbing aspects of Narita Boy, its soundtrack and ability to commit to its style is what comes to mind. I’ve already touched on the style of the game, but to highlight some extra points. The game features some truly wonderful enemy design to go along with its characters.

Some are big hulking beasts, while other foes are slithery and sneaky, disappearing in a puff of smoke that is beautifully animated. The game also makes great use of color to truly make you feel like you are in an 80s paradise, with red, yellow, and blue infused throughout the game. 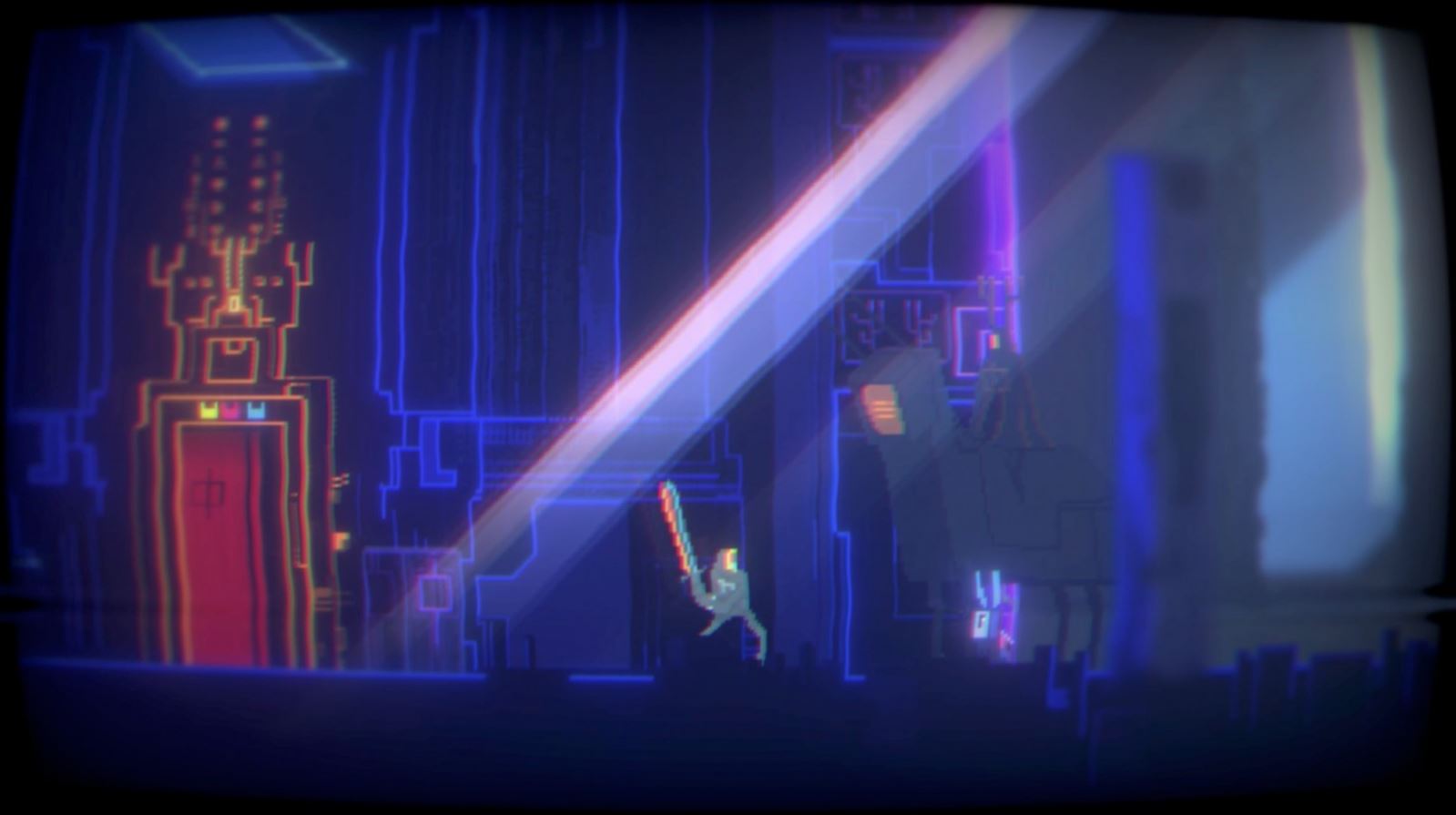 But, the thing you absolutely should not ignore with Narita Boy is its soundtrack, cause holy f*ck is it amazing. Whether it is the mind-branding theme song that might give the game some music nominations at this year’s awards shows or the incredible ambience created whilst playing and fighting, through suggestive synthesized waves skulking into your eardrums, it is all incredible and really helps the experience stand out, adding to the style it possesses.

Similarly, the sound effects when it comes to exploring or opening doors and fighting enemies are just as good, with my particular favourite being the clapping noise that plays when you summon a person to speak to. Enemy attacks have an impact and so do yours, all being felt through the rumble in the controller, which is surprisingly potent given this is a PS4 game, not making use of the DualSense’s heightened haptic feedback.

Complimentary, But Not Elevatory Gameplay

At its core, Narita Boy is a linear experience where you go around and explore the various environments of the Digital Kingdom collecting Techno-Keys to unlock new areas and doors. This is all on your way to saving the kingdom and restoring the Creator’s memories.

Exploration includes a high but useful jump and a dodge, that feels a little bit too floaty to be precise. But, combat is where the majority of your time will be spent, and while simplistic, it is satisfying and varied. 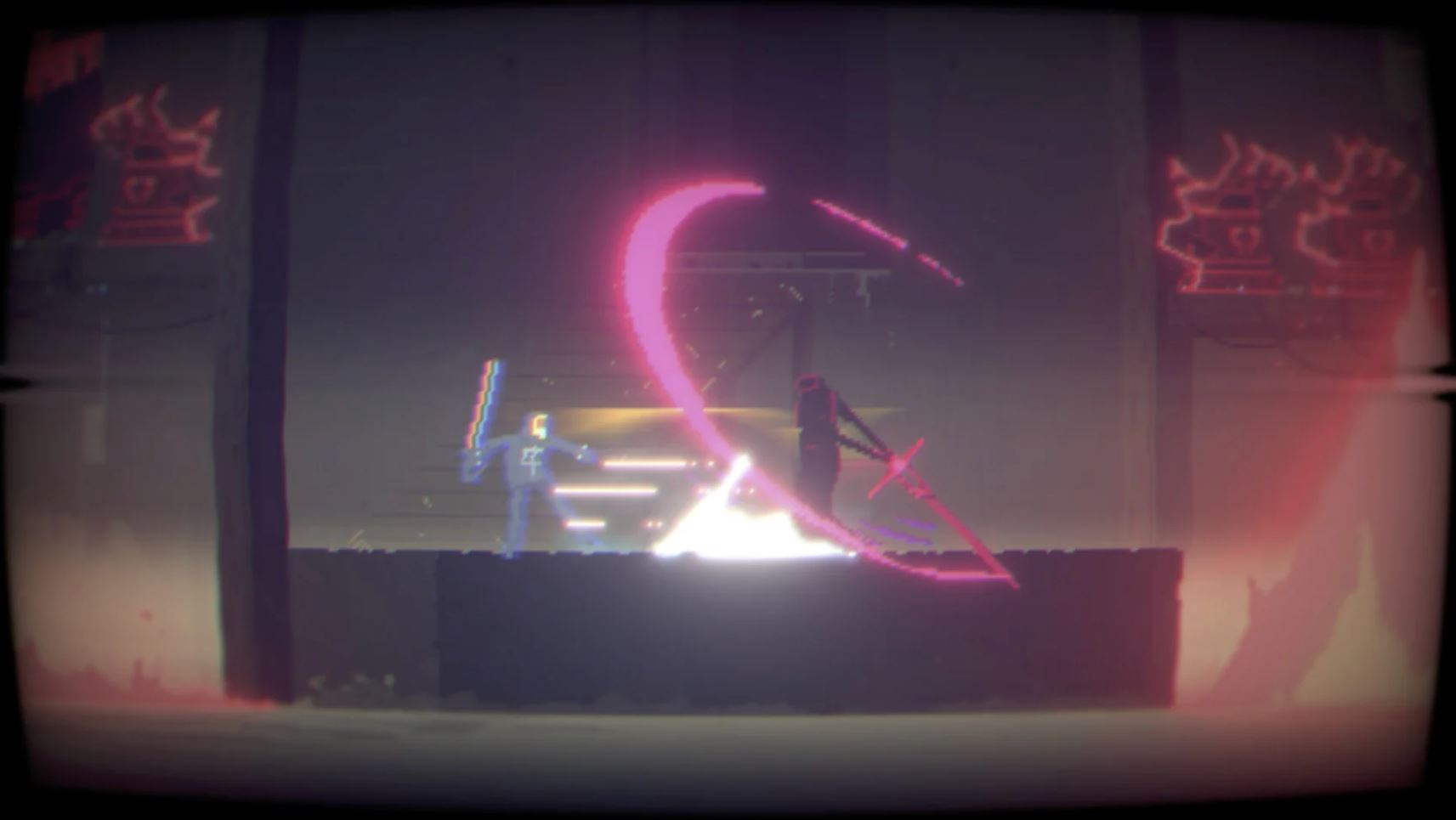 At first, you will mostly be using standard sword combos, but a little further into the game you get access to a charged slash and even an ultimate-like laser beam that shoots across the entire screen, clearing everything in your way. This then is added to with a shotgun for long-ranged fire and some active abilities, like being able to restore a bar of your health by holding down a triangle.

It ultimately isn’t too complex, but it all works together well and the tons of bosses you face never feel too difficult to overcome but do challenge you. The exploration part of this gameplay, however, is less satisfying. Most of the Digital Kingdom happens to look the same, filled with similar colors in an area or very static, blocky level layouts, which makes exploring and finding your way around kind of difficult at times, especially when you need to remember where a door was.

I also found myself getting stuck occasionally, with the way forward unclear, despite an arrow telling me the direction. In these moments I got to the location I needed to go to but I didn’t really know what to do when I was there.

Also, areas of the game are locked off by these gates which require you to choose three correct symbols which are found in the environment nearby. Whilst, fine at first they quickly get a bit tiresome and drag down the exploration more than I would have liked. 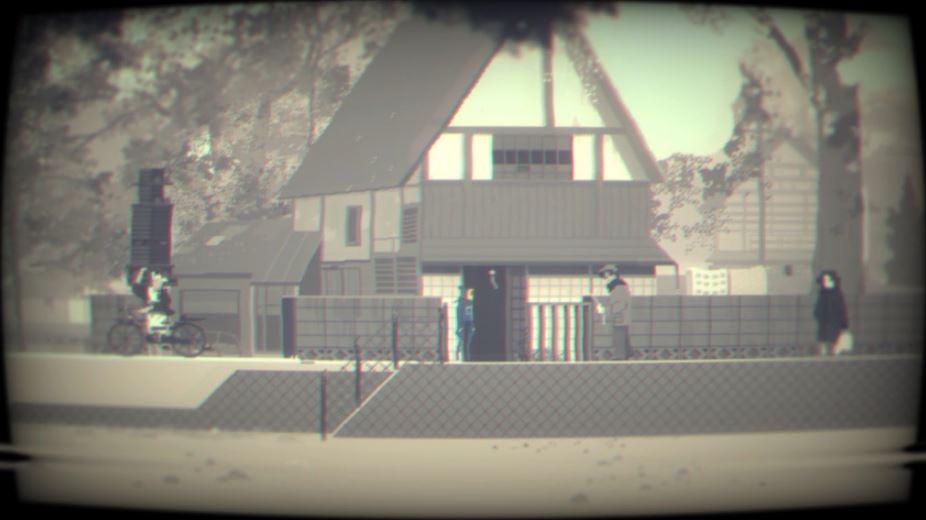 A Step Into A New Era Of Gaming

Narita Boy does feel like a step into a new style of game. Its commitment to the retro digital aesthetic is something I haven’t seen before and the flaws the game has are easily overshadowed by just how kick-ass Studio Koba‘s game looks and sounds.

Gameplay has some weaknesses and some aspects outstay their welcome, but there is no denying that what is here is really quite good and feels like phase 1 of a new collection of experiences based around this digital style. I hope games take and innovate on a lot of what is here with Narita Boy.

Narita Boy is available now on PS4 and is playable on PS5 via backwards compatibility.

Narita Boy feels like a completely unique experience and the first step for a new collection of games based around this digital aesthetic. The soundtrack here is flawless and the way everything plays into its setting and narrative is just as good. The gameplay might slog at times and not quite hit the mark, but Narita Boy is something you shouldn't miss.