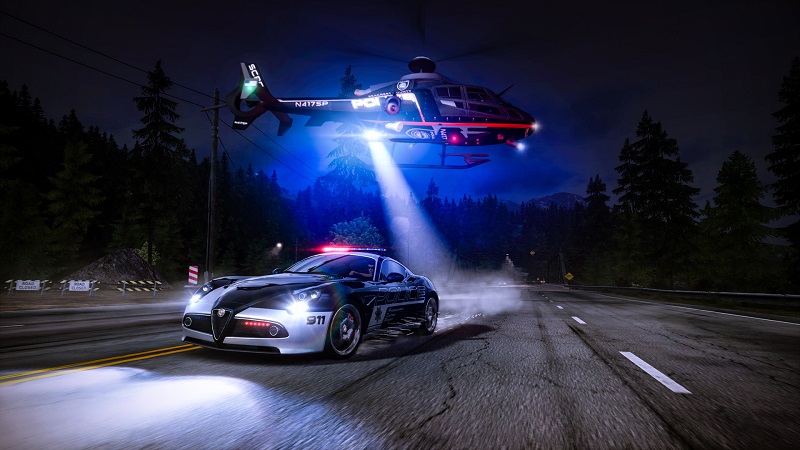 Need For Speed: Hot Pursuit Remastered PS4 Review. Out of all the Need for Speed games to come motoring along in the last decade, Hot Pursuit is arguably the most streamlined of the lot. Eschewing the open world bloat and the Fast and Furious lite drama that would blight many of the later games in the series, Need for Speed: Hot Pursuit has carved out something of a niche for itself in the intervening years that few have seemingly appreciated.

A Beautifully Distilled Arcade Racer That Has Aged Wonderfully

Emerging from the garage in shiny, remastered form almost exactly a decade after its original release on PS3, Need for Speed: Hot Pursuit Remastered is a timely reminder about how enjoyable EA’s perennial racing franchise can really be when everything is pared back. An alarmingly effective demonstration of the maxim that less is indeed, more.

From its densely wooded highways, lined with gently swaying fern and pine trees to the eye-popping golden beaches of its expansive coast, it’s certainly fair to say that I’ve missed the idyllic Seacrest County and that returning to it in far greater detail and fidelity than ever before has been quite the welcome experience.

Encompassing the same core title that launched on PS3 back in 2010 along with all of the DLC which was released subsequently, Need for Speed: Hot Pursuit Remastered isn’t just the most polished iteration of Criterion’s first dalliance with the famed racing series to date, but it’s arguably the most definitive one too.

Beyond the generous content offering, Need for Speed: Hot Pursuit Remastered offers an expansive single-player campaign, inviting players to scream along the picturesque roads of Seacrest County as wild racer, or as the fearsomely equipped police force which has been tasked with curtailing the latter’s law-breaking activities. Split up into a series of different events which include more traditional races, takedown events, car showdowns and much more besides, Need for Speed: Hot Pursuit Remasters offers a broad variety of racing modes to keep things nice and varied.

When it comes to the actual act of doing the racing, each car has its own palpable sense of weight and inertia too; fashioning a handling model that feels utterly unique from one car to the next. Whether it’s the deep steering and weighty drifts of the Subaru Impreza, or the butter smooth handling of the Cayman, the curated selection of cars in Need for Speed: Hot Pursuit Remastered all feel appreciably bespoke and a real joy to drive.

The ability to temporarily boost your top speed and acceleration with a nitrous kit can prove to be the difference maker in a race, allowing you to just squeak over the finish line ahead of your opponents or shave precious split second off of a target lap time. As ever though, its use must be tempered accordingly, not least because it is desperately finite and can only be replenished by pulling off daring drifts, near-collisions and other dangerous acts of driving.

Physics-wise, Need for Speed: Hot Pursuit Remastered represents something of a welcome throwback here too. A world away from the takedown heavy emphasis of later instalments in which you could just as easily smash up your fellow racers than simply be the better driver, here no such shortcuts are available. Instead, wannabe racers and cops alike must hone their roadcraft accordingly, understanding the handling, top speed and acceleration limits of each car under their control and taking each vehicle out on the road over and over to identify their performance boundaries.

If you’ve played the 2010 original however, you’ll know that matters don’t end there. In Need for Speed: Hot Pursuit Remastered each vehicle can be equipped with a number of countermeasures to stymie aggressive cops and rampant racers alike. From a carefully placed spike strip to pre-planned roadblocks, surveillance helicopters and devastating EMPs, Need for Speed: Hot Pursuit Remastered is as much about waging high-speed tactical war on your opponents, as it is being able to follow a decent racing line.

Now though, you can not only fully track your racing performance on Speedwall against PS4, PC and Xbox One players, but you can race against them too – massively increasing the combined pool of available players as a result.

It’s not all rosy in remastered land, however. On PS4 Pro’s resolution mode, while boasting an admittedly razor-sharp 4K presentation, suffers badly in the frame rate stakes, making Need for Speed: Hot Pursuit Remastered feel much more sluggish and far less responsive as a result. As such the only real option that exists for PS4 Pro owners is to play in performance mode simply because the gulf in responsiveness is too large to bear in resolution mode.

As someone who feels that Need for Speed has long drifted, if you’ll excuse the pun, away from its original and compelling design bedrock, Hot Pursuit: Remastered serves as a timely and much needed reminder that the series is often its best when it’s trying to do less rather than more.

An eye-opening restoration of arguably the purest title in the series, Need for Speed: Hot Pursuit Remastered brings distilled white-knuckle thrills and furious racing back in fashion once more. It's time to party like it's 2010.