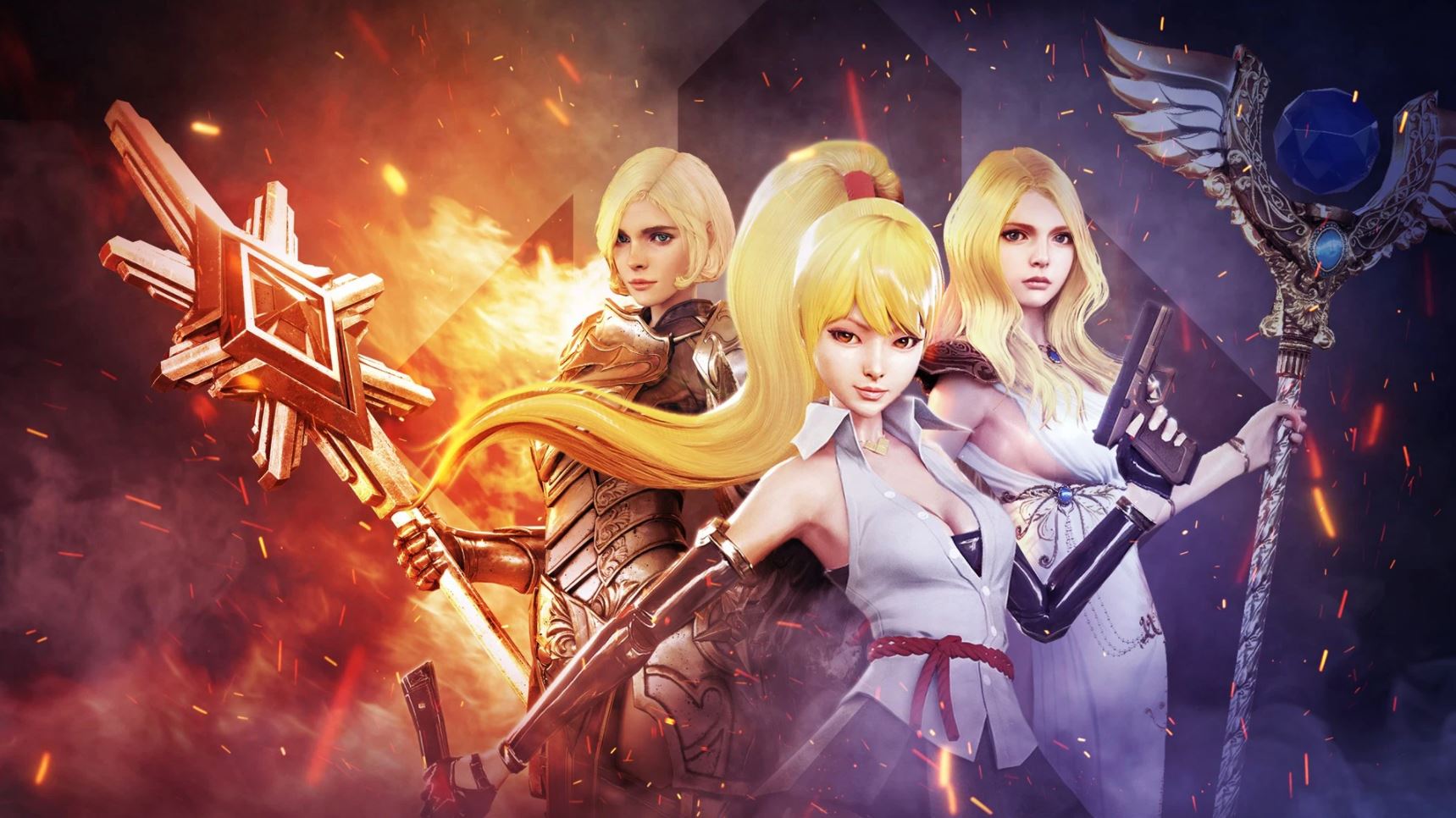 Neoverse Trinity Edition PS4 review. With an abundance of extravagant visual effects and larger than life character designs, Neoverse certainly cuts something of an indelible first impression. Despite possessing such an arresting veneer, Neoverse actually proves its quality is more than skin deep, as it neatly (though not always entirely successfully) intertwines card battler, roguelike and tactical gameplay beats to highly entertaining effect.

What isn’t quite entertaining though is the story, such as it is, which underpins Neoverse’s card battling shenanigans. Threadbare at best and bereft of any real meaningful lore to keep you invested, Neoverse’s story imparts a tale about the multiverse being under attack from malevolent forces that want to extinguish all life and naturally, the only folks that can stop them are a trio of super powered warriors who must travel across timelines to get the job done. And yep, that’s pretty much all there is to it.

Peer past its narrative failings however and a surprisingly deep and thoughtful card battler soon reveals itself. As alluded to previously, players can choose from three very different warriors to tackle the evil menace which lay before them. In a manner akin to Mega Crit’s stellar Slay The Spire, each warrior possesses unique talents, abilities and card types that make them wholly unique to play, thus improving Neoverse’s long-term prospects as a gaming fixture going forward. 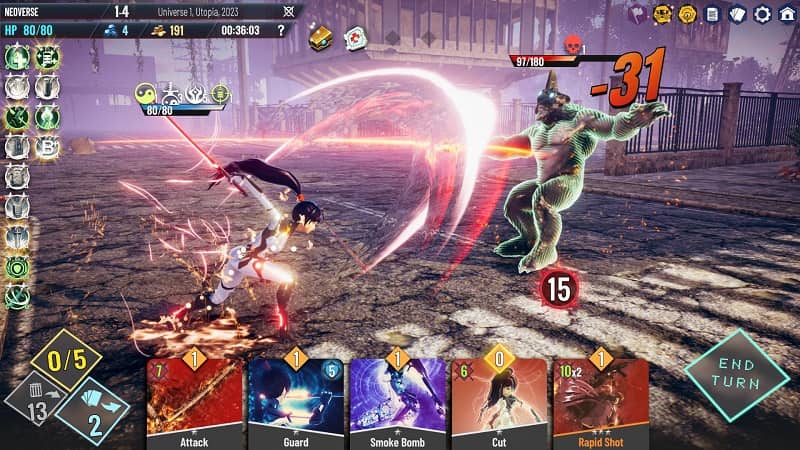 Agent Naya combines guns and swords to essentially make her Neoverse’s equivalent of a rogue with high damage potential, while Paladin Claire is all about combining high defense with healing and other such useful abilities. Finally, Summoner Helena can, you guessed it, summon all manner of beasts to fight alongside her while augmenting her impressive melee and ranged attacks. They’re a varied ensemble certainly and do a good job of accommodating a fairly broad spectrum of play styles as a result.

Where Neoverse really surprises though, is in just how deep its card synergy systems are. Like any turn-based card battler worth its salt, Neoverse rewards those players who know how to stack cards correctly for maximum benefit. While the theorycraft that underscores such synergies might be beyond some beginner players, Neoverse makes a welcome appeal to them also – allowing players to specialize their deck for improved defense, attack, survivability and so on with a range of preset decks to get things started.

This also neatly dovetails into just how varied Neoverse’s cards are. Sure enough, while each of the three warriors has their own deck of cards (much like how each character does in Slay the Spire), there is also a sizable number of common and general cards too which can be used alongside these more specialist cards to really customise your deck. The upshot of this is that Neoverse affords a staggering amount of creative latitude to players, which is certainly welcome as it pertains to forging your own play style. 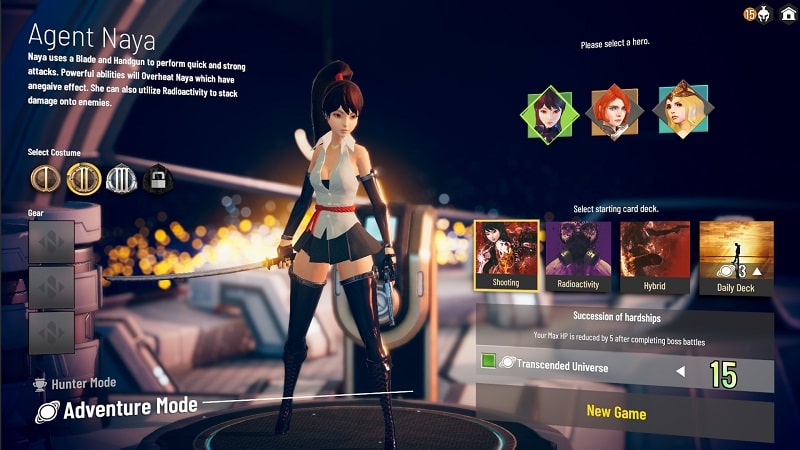 Elsewhere, it’s fair to say that Neoverse’s interpretation of RNG can be overly lenient when it comes to drawing favorable cards from your deck. Sure enough, while the opposite approach would result in the sort of hair-pulling unfairness that we’ve seen time and again in other games of a similar ilk, in Neoverse you get the feeling that the game is a little too generous in this regard; even if it does perhaps help to ease new players into its more sophisticated mechanics.

However, while Neoverse might seem something of a doddle to start with, the Transcended Universe system is a neat mechanic that actually balances the difficulty quite well. Available exclusively in Neoverse’s adventure mode, the higher you set the Transcended Universe rating, the more difficult fights will be as increasingly debilitating debuffs depending are cast into the mix based on the rating you have chosen. A lower rating might only result in harder hitting enemies, while a higher rating could result in your HP regen being reduced or negated completely. It’s a neat mechanic that helps to ensure even armchair card battling generals will experience a robust challenge.

Elsewhere, Neoverse does a commendable job of keeping players engaged with its card based battles on a more superficial level too. From towering hulking robots made of chrome and steel to hellish looking centaurs, Neoverse certainly makes the most of its eye-opening visual presentation with an array of different monsters, bosses and more for players to test their card battling mettle against. 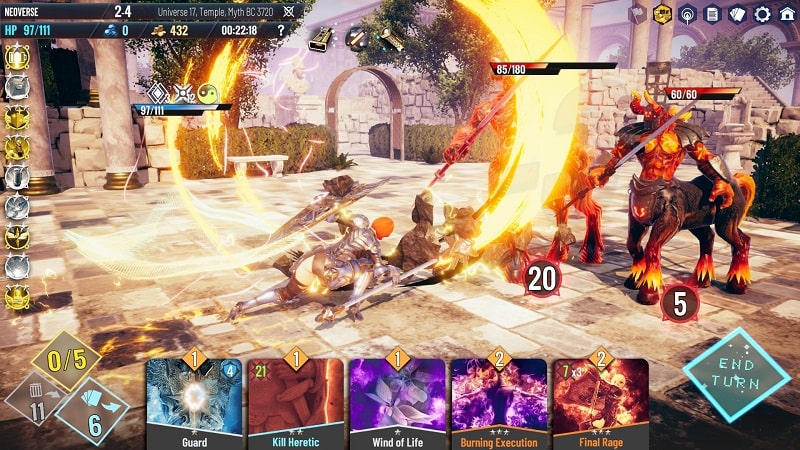 Though Neoverse is a single player affair, don’t be fooled into thinking that the game doesn’t have legs, because it does; for days and days. In addition to the campaign, challenge and skirmish style modes, and the ability to use currency earned from battles to purchase new cosmetic items, Neoverse also packs in all of the DLC from the PC version of the game too (hence its Trinity Edition moniker). In practice, this results in an additional costumes for players to work toward which serves to extend Neoverse’s value offering yet further still.

I’ve seen other folks describe Neoverse as ‘Slay The Spire with waifus’ and while such a reductive comparison seems justified on passing glance, Neoverse never quite reaches the heady caliber of Mega Crit’s genre defining card battler. That said however, it’s visually captivating and makes enough overtures to easing the difficulty and other tweaks across its broader design that it might just tempt those who passed over Slay The Spire and its ilk.

If you’ve found yourself otherwise beguiled or put off by the deep complexities of other card battlers, then Neoverse could be just what the doctor ordered, as its sympathetic approach to newcomers and impressive visual presentation work in tandem to make one of the more engaging offerings that the genre has seen in some time.

Neoverse Trinity Edition is out now on PlayStation 4.

An impressive card battler with depth for days and an eye-opening visual presentation. What Neoverse might lack in terms of a story or truly innovative mechanic it more than makes up for with customisation, longevity and a much welcome intention to engage with newcomers, rather than just the usual card battling savants.