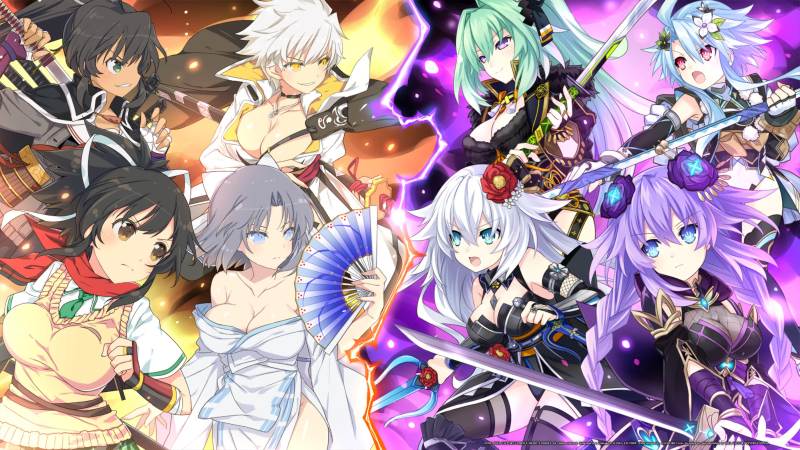 Neptunia x Senran Kagura: Ninja Wars PS4 Review – I almost hate to admit it, but the Neptunia games are a bit of a guilty pleasure for me. I roll my eyes at the fan service, and the writing gets heavy handed on the campiness, but I still find myself chuckling at the wall-breaking jokes and diving into the actiony, almost mindless combat most of the games offer. Senran Kagura is another game of similar ilk, and I hadn’t tried any of them in this crossover.

With that in mind, this borderline rinse-repeat franchise always finds a way to get me to contradict myself and play its games. The inevitable question is: Does Neptunia x Senran Kagura: Ninja Wars scratch that guilty, goofy itch?

The world of Gamninjustri houses two feuding ninja clans, the Heartland Ninjas and the Marveland Ninjas, plugging the publishers in Neptunia fashion. For centuries they have fought one another, but the current generation of ninjas don’t all share the same level of hatred for each other.

In the middle of one of their scrums, a third ninja clan, the Steeme Legion, threatens to combat and take down both of the Gamninjustri clans. Thus, the two rival factions find themselves forced into working together against a common enemy–though not really that forced. 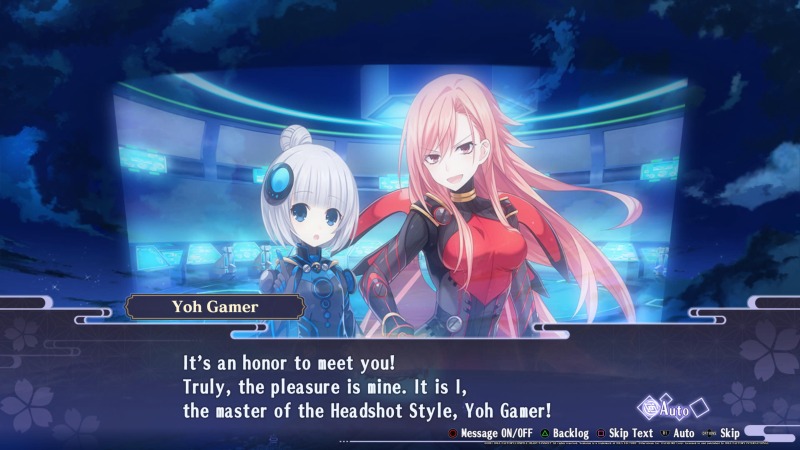 If you’re anything like me, it took a couple looks at “Gamninjustri” to catch that extra ‘n’ in there, taking a long-standing Neptunia joke and ninja-fying it. This is the level of humor that Neptunia brings to the table time and time again. It’s dumb face value fun, and I love me a good, dry pun, but it’s not for everyone.

In fact, I only came to terms with what Neptunia tries to do with its humor in the last couple years.

Like all Neptunia games, the writers take zero risks and do little to expand on either of the franchise’s lores. Instead, they take light jabs at gaming trends and tropes. Seven members of the Neptunia cast, including side characters, make appearances while only the four main Senran Kagura characters represent their franchise.

This lopsided representation also carries over into the writing because most of the focus revolves around the Neptunia crew while the Senran allies kind of just come along for the ride.

I also want to mention that I appreciate that the writers interjected some bro-loving characters in this entry. It adds both some nice humor and a little variety to the cast, even if they only appear a little bit. 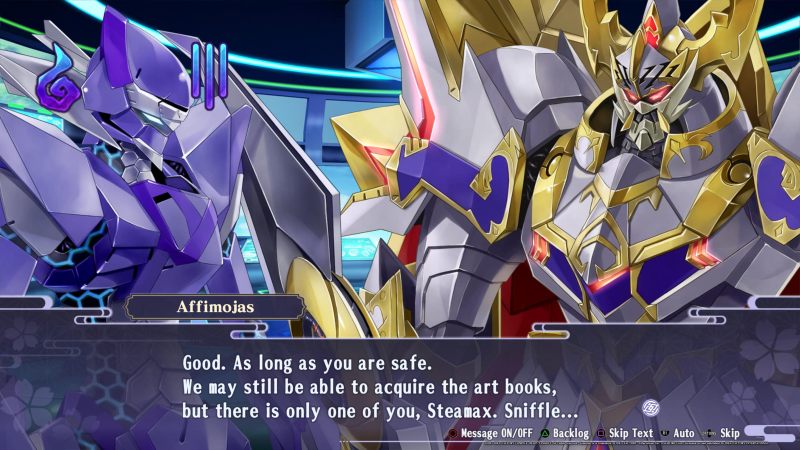 A good crossover brings two fan bases together with the intention of including non-fans into the fold. Again, I know nothing of the Senran Kagura games, but playing as the characters in this environment made me wonder how they operate on their home turf. I’m not jumping out of my chair to buy the most convenient entry in that franchise, by any means.

Still, I’m curious, much like I’m always curious about the newest Neptunia game, so I’d say this crossover does exactly what it wants to do, even though it could have represented both franchises equally.

Combat demands very little of you. Holding R2 allows you to choose from different elements, like fire and earth, to add damage to your normal hits. Holding L2 lets you select different ninja arts, which you can assign based on your preferences.

One frustrating aspect to the ninja arts (which I’ll reference shortly) comes from some of these abilities granting immunity from damage while others leave you wide open to any attack that comes your way. The logic behind this baffles me just because some of them make you disappear entirely and you still take damage while others keep you visible but also grant immunity.

Combine this with the end game conversation I’ll bring up shortly, and you get one messy amalgamation of combat standards that don’t work together.

Another big knock I always bring to the Neptunia games comes from how dated this team keeps the visuals. Sure, creating new entries is simple when reusing the old assets, but these games would benefit from some extra production value here and there as more come out. These are fun palette cleanser games, but they still deserve some extra time and effort.

While the voice work comes solely in Japanese, the full gamete of voices only vary somewhat. Many of the characters sound similar but with different aspirations, but they all sound as you would expect from a franchise that comes out every year or so: good enough to get by.

Meanwhile, the sound effects for combat feel the same way, offering just enough to convey what they intend but lacking that oomph or impact to truly hit home. Still, it does enough to match the on-screen events. 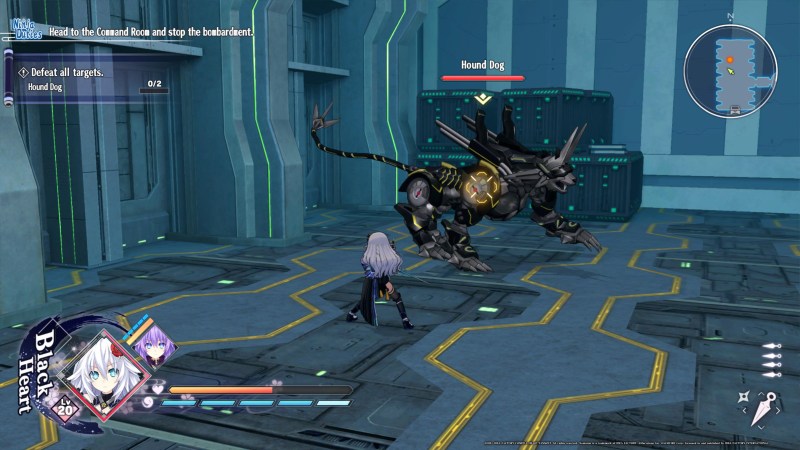 On that note, one aspect of the game that deeply needs work is how it handles end game content. From the beginning, I cleared all side missions when they unlocked, and this kept my characters at the level the next main story mission required me to be. While not organic, this progression style makes enough sense to get by.

However, the final fight, which calls for level 40 characters, stomps me so badly that I feel like I just stepped out of some daydream and missed a complete section of the game. This boss jumps around the entire circular battlefield, attacks with skills that reach anywhere on the field, and his speed far surpasses any boss beforehand. Absolutely zero bosses challenged me before this one, and it breaks the game’s scale as a result.

This leads me to believe that the only way to beat this boss with any sort of comparable ease to the other bosses is to grind the repeatable side missions until my characters can flex at enemies to death. Games such as these usually have a more challenging end boss, but this dwarfs any challenge offered by similar titles.

I can only conclude that this is an effortless attempt to elongate the game far more than it needs to be–and quite frankly more than it deserves. Combine this with stiff combat controls that do not accommodate this increased demand, and you face a recipe for unrelenting frustration. 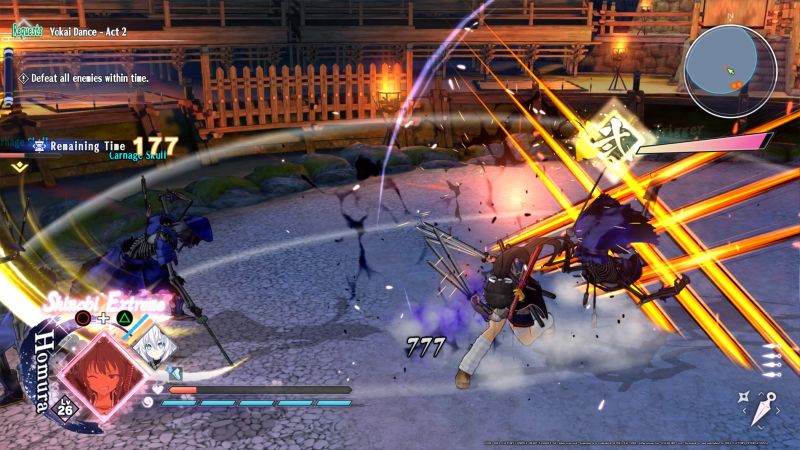 More of The Same

I look back on my time with Neptunia X Senran Kagura: Ninja Wars and feel like most of my time spent on the game passed pleasantly with the kind of camp, goofiness, and easy-going action I enjoy from the Neptunia franchise. As expected, the game doesn’t challenge anything and doesn’t try anything new, which isn’t the game’s failing.

The end game brings about the biggest problem, exponentially increasing difficulty the moment the final boss arrives. Combine that with a forced grind to compensate for the difficulty spike, and the campy charm of the franchise can’t keep up with the frustrating demands at the end of the game.

Neptunia x Senran Kagura Ninja Wars maintains the cheeky charms of both franchise, bringing in the fun, safe jokes and jabs at the gaming industry. However, it taxes that charm with the gameplay choices made at the end of the game. There's enough here to bring in longtime fans, and even some crossover fans between the franchises, but not many others will rally to this mashup.