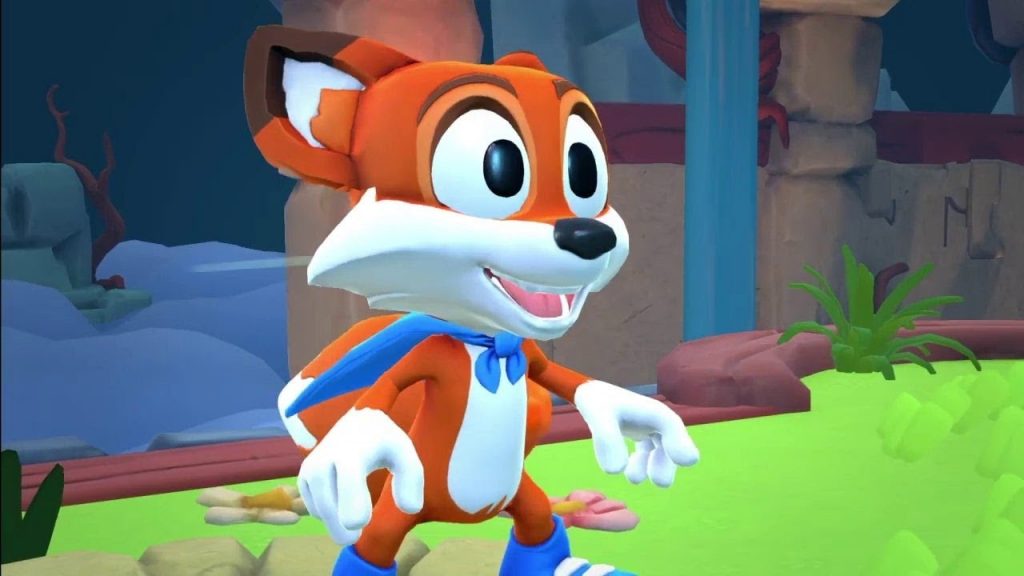 A Simple Story With Some Entertaining Characters

Lucky’s Tale tells the story of a group of fox-faced and fox-tailed guardians that protect a book called The Book of Ages. The book holds mysterious worlds and living creatures in its pages. Lucky, a young fox is separated from his guardian sister after Jinx, a powerful former guardian (and massive cat), tries to take the book for himself. Lucky sets out on a quest to recover missing pages from the book and return to his sister.

Standing in Lucky’s path are Jinx’s children. The ‘Kitty Litter’ as they are called, are a bunch of kitties who are trying to recover the book and its missing pages so they can give it to their father. The Kitty Litter are a bunch of adorable cats that I really didn’t want to fight. One thought he was a ninja using smoke bombs to constantly run from Lucky, while others thought they were pirates.

The characters are charming in their own way certainly. Though I loved the villain cats, Lucky makes friends as he travels from world to world. A small golem follows him across all the worlds but he also makes friends with a worm who happens to be a sheriff, and a bunch of yetis who are professional wrestlers who have picked up Yoga. These characters guide Lucky on his path and provide useful tips if you find yourself stuck or unaware of where to go next.

Simple Yet Entertaining From Start to Finish

New Super Lucky’s Tale is a simple platformer that doesn’t do anything to innovate the genre. It’s not a bad thing by any means as the game excels at simply being a fun platformer which really nails the fundamentals in a way that you just don’t see often these days.

Lucky has a few abilities at his disposal besides simply jumping. Lucky can not only swing his tail to break objects and damage enemies, but our frantic fox is also able to dig himself into the ground and travel underneath the surface. This technique is used to dig up hidden objects stuck in the ground and solve puzzles.

Each world that Lucky visits present its own fun challenges and some of the levels drastically change the gameplay. Each world consists of gates that Lucky must travel through and complete. Each stage also holds four key collectibles. You don’t have to collect all four to finish a mission but each mission holds a specific type of key.

Lucky must collect a certain amount of these keys to open up the boss gate and challenge one of the Kitty Litter cats in a boss fight. Each of these gates will also drastically change up how you play the game. One mission will see the game world turned into a 2D platformer, while another one will turn it into an on-rails runner. One of my favorites ones is when you are put into a hamster ball and forced to collect coins in a marble maze where you shift the board around to move the marble.

These are just some examples but for the most part, you’ll be running around a 3D world collecting coins and avoiding obstacles throughout. There are plenty of collectibles throughout each world to find, from secret pages to letters that will spell out Lucky’s name. For perfectionists, this will be something they are into but for those looking to simply enjoy the game, they can get through it rather quickly.

Sure, it isn’t the most groundbreaking looking game but it holds up with some of the best. The vibrant colors and vastly different worlds offer something for everyone. The soundtrack is your standard fare but I was really impressed with the electronic soundtrack when I was playing in the weird Tron-like worlds which become available after you finish the game.

New Super Lucky’s Tale isn’t a groundbreaking platformer but its a damn fun one. Lucky is a fun character and the worlds he visits are full of their own life and personality. Constantly changing the gameplay mechanics through the various stages helps to keep the game feeling fresh. New Super Lucky’s Tale is a simple and fun platformer for anyone looking for an escape from the dark and gritty titles that have dominated the industry this year.