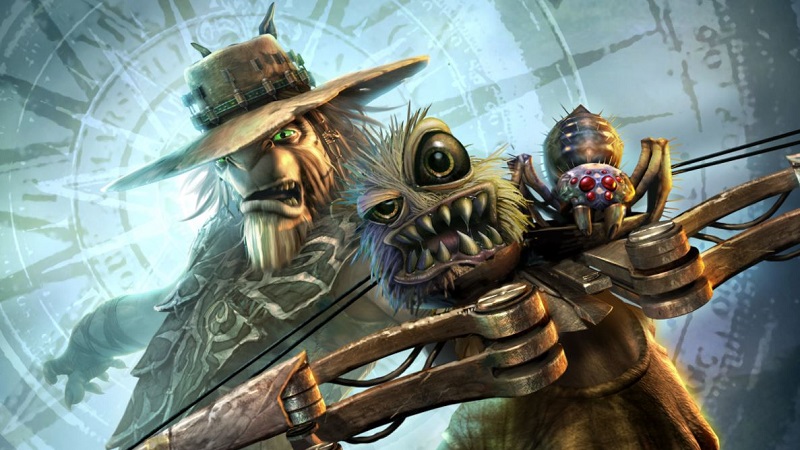 Oddworld: Stranger’s Wrath PS5 review. For the longest time I’ve always admired the versatility of the Oddworld franchise to delve into genres that exist beyond those which played a role in its inception – in much the same way that Steamworld games have managed to pull off a similar feat. With Oddworld: Stranger’s Wrath however, developer Oddworld Inhabitants arguably made something so radically different from the series base design DNA that it demands investigation – a fact that remains as true in 2022 as it did back in 2005 during its original release.

An Aging, Yet Uncanny Gunfighter That Still Has Plenty Of Charm And A Lot To Say

Effectively the second time that Oddworld: Stranger’s Wrath has been remastered and re-released (the last time was on PS3, nearly ten years ago in 2011), Oddworld Stranger’s Wrath on PS4 and PS5 is a hybrid third-person and first-person action adventure that casts players as the titular Stranger, an hard-bitten bounty hunter who must wander the frontier lands of Western Mudos in search of dastardly scoundrels to bring in for a whole heap of cold, hard Moolah to fix an ongoing ‘health’ problem. 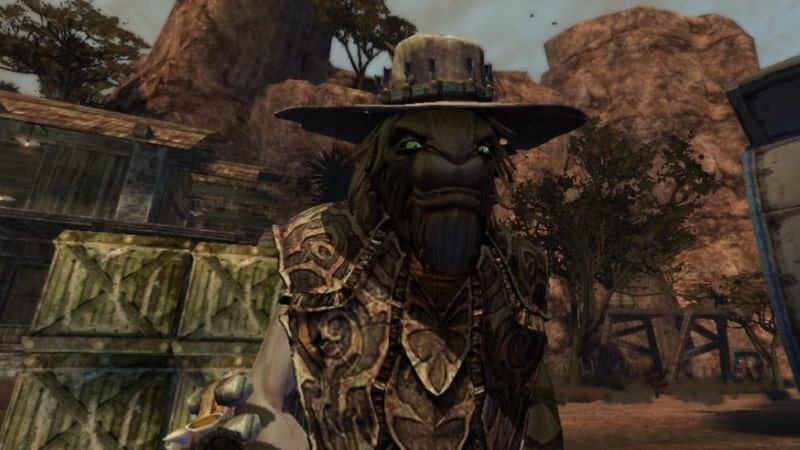 Kicking things off in a ramshackle shanty hub town, Stranger can buy supplies, upgrade his abilities and take on new bounties – so far, so normal then. This, however, is an Oddworld game and ‘normal’ doesn’t stay that way for very long. When it comes to the act of snatching up these bounties, Stranger will be sent to specific areas outside the hub town and is given the option to take these wanted scoundrels in either dead or alive – with predictably more Moolah being dished out for bringing these scumbags in warm rather than cold. With a variety of concussive melee strikes at his disposal, Stranger can get the job done pretty effectively up close, but it’s really at range that Stranger’s Wrath manages to shake things up a bit.

You see, Stranger not only has his fists (and a rock hard skull), but when switching into first-person view he also has a very special crossbow that can fire literal live ammo at his foes to capture them or, well, not. I wasn’t exaggerating when I said ‘live ammo’ either, as our gruff Stranger can stun and pick up various critters that each produce a different effect when fired from Stranger’s crossbow. The delightfully goofy Chippunks can cause a whole heap of noise and force enemies to flock to their location, while the rabid Fuzzles can be stuck onto surfaces and will leap onto enemies who wander too close, savaging them mercilessly.

Rather than just being a neat gimmick, these different live ammo types can be used to setup some pretty clever and often hilarious scenarios. Firing a Chippunk into a pile of Fuzzles next to a body of water for example, will cause your enemy to stumble around, madly clawing at their neck and back as they topple over into the deathly deep. Another example of the creative latitude that Stranger’s Wrath affords wannabe bounty hunters would be using the Thudslug ammunition to strike enemies with such force that they get blasted over a set of railings and into a spinning fan waiting below. Quite simply, the ways and means that the Stranger has at his disposal to stun or kill Stranger’s enemies is still refreshingly great – and I’m all about it. 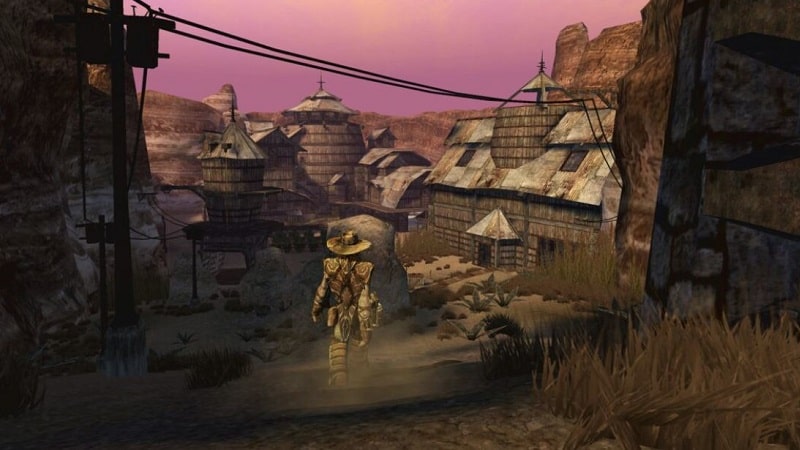 Another somewhat unexpected element that must be managed in the game is the notion of stamina. When running at full sprint and on all fours at maximum speed, Stranger can bull charge into enemies, knocking them for six for an easy pick up – but losing precious stamina as a result. Likewise, if Stranger is injured and is losing health, he can consume his stamina reserves quickly to keep himself in the fight, forcing the player to perform a fair amount of risk/reward analysis on the hoof as they attempt to make the best use of Stranger’s desperately finite supply of grit.

However, despite the extra dollop of oddity that the live ammo bring to the first-person shooter parts of Stranger’s Wrath, it certainly isn’t unreasonable to posit that the game would be something of an average shooter without this mechanic. Equally, there’s a fair amount of platforming to be done in Oddworld: Stranger’s Wrath too, such as climbing ropes, performing double jumps and acrobatic feats of that nature (good heavens does Stranger’s frequent grunting annoy when he’s doing this stuff), but again, it all feels rather average and is nothing we haven’t seen before elsewhere.

Though that last paragraph might make it seem like Stranger’s Wrath isn’t quite all that, the game is actually far more than the sum of its parts – and there’s much more going on here than just a platformer with some esoteric blasting going on. Though Stranger’s Wrath is as different as it possibly could be from the trial and error stuffed shenanigans of 2D puzzle platformer Abe’s Odyssey, it also deeply shares the macro commentary and real-life analogous topics that all the games in the franchise seemingly hold as a common bond. 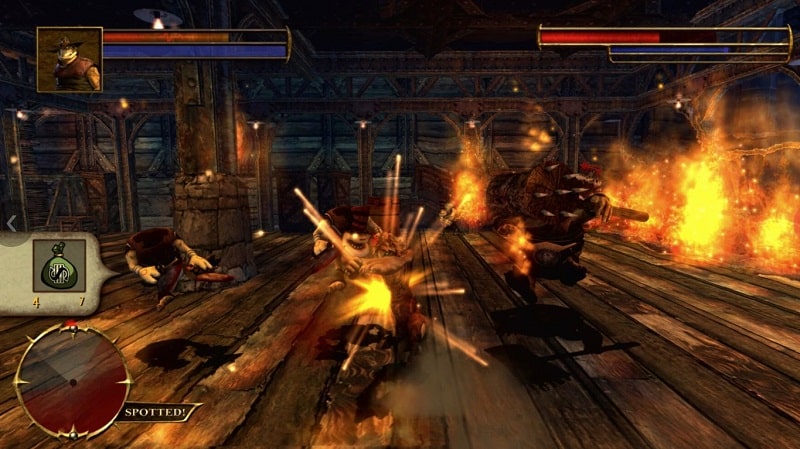 Presenting something of a harrowing meditation on the cost of healthcare, the plight of indigenous peoples and the amorality that abounds at civilisation’s farthest reaches in a way that feels nuanced and resonant, Oddworld: Stranger’s Wrath is an innovative blend of platforming and creativity-laden shooter action that certainly stands (at least in the opinion of this humble scribe) as the best thing to ever come out of the Oddworld franchise at large. But there’s more – Stranger’s Wrath also has a lively and creative art style that is all its own, neatly mixing in Oddworld’s more eccentric visual hallmarks with a dusty and ultimately fairly grim western setting that still manages to feel compellingly bespoke even today.

If you’ve had the good misfortune of never playing Oddworld: Stranger’s Wrath before, one thing I do have to mention is that the game changes somewhat radically at just past its halfway point to such an extent that some mechanics are forsaken entirely, while other new ones are brought to bear – though the game still ultimately sticks to its third-person platforming/first-person shooter hybrid template.

Despite the fact that Oddworld: Stranger’s Wrath is nearly seventeen years old, I’m still not in the business for posting spoilers in a review like this – not least because with the this latest release a whole new generation of gamers will be discovering the game for the first time. Needless to say this shift is a shock certainly, but one that feels well earned by the time you reach it. 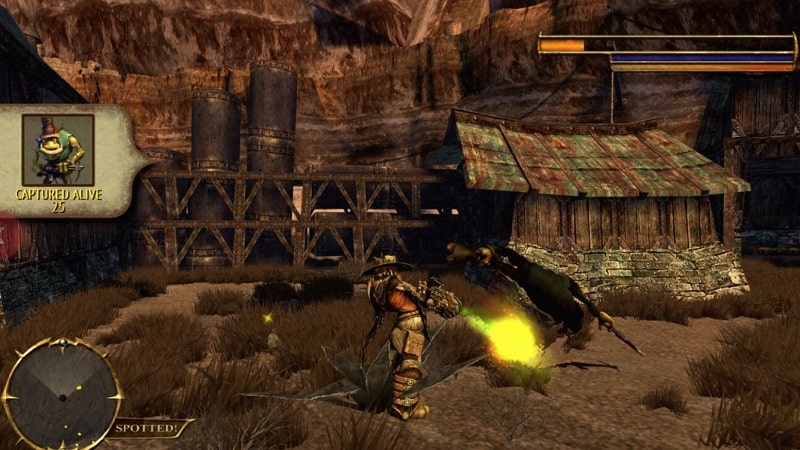 With this release on PS4 and PS5 consoles, Oddworld: Stranger’s Wrath is the best it has ever technically been, too. While the game pops along quite nicely on base PS4 with improved textures, 1080p resolution and buttery smooth 60 frames per second action, lucky PS5 owners not only get a razor sharp 4K resolution presentation, but also near instant loading times that make Oddworld: Stranger’s Wrath latest release arguably its definitive incarnation.

Something of a welcome throwback to when games revelled in creativity and developers weren’t afraid to blend in deeper, more profound themes with some truly surprising storytelling, Oddworld: Stranger’s Wrath ascends beyond its mish-mash of platforming shootery to create a memorable effort that a whole new generation of gamers can finally enjoy in its best form. Oddworld: Stranger’s Wrath might not be perfect, but it is delightfully odd, full of charm and laden with surprise and that, in 2022, still remains more than enough to make it irresistible.

Oddworld: Stranger’s Wrath is out now on PS4 and runs with enhanced performance on PS5.

Something of a welcome throwback to when games revelled in creativity and developers weren't afraid to combine deeper, more profound themes with some smart genre blending, Oddworld: Stranger's Wrath ascends beyond its mish-mash of platforming shootery to create a memorable effort that a whole new generation of gamers can finally enjoy in its best form. Oddworld: Stranger's Wrath might not be perfect, but it is delightfully odd, full of charm and laden with surprise and that, in 2022, still remains more than enough to make it irresistible.