The ongoing adventures of Luffy, the Straw Hat pirate, in the Manga/anime One Piece is one of the more charming and fun examples of the medium around, whilst still being touched by the melodrama and violence you’d expect: a fantastical cast of characters, dazzling special abilities and plenty of jolly daftness. The ingredients are all there for a fun fighting game, and with the latest gaming spinoff from the series, One Piece: Burning Blood, that’s what you go in expecting. And that is exactly what you get…for a while anyway.

If you’re not overly familiar with One Piece, it follows Monkey D. Luffy and his ongoing quest to become the King of the Pirates by being the first to discover the lost treasure of legendary former Pirate King Gol D. Roger. If you are new to One Piece, then you’ve got over 800 episodes to catch up on, so good luck with that. Burning Blood tells an original story that seems designed to simply get all the best characters for brawling into the game, which is fair enough. If you’re looking for anything in the way of a substantial story then you’ll be sorely disappointed on that front. A good knowledge of One Piece goes a long way to milking any understanding out of this anyway, so that’ll be a large factor in what you’ll gain from the flimsy excuse for a plot. Safe to say it will range from confusion to dissatisfaction however you come into it. Still, the fighting is what you came for, right?

The core of Burning Blood is about two teams of three combatants facing off against each other with a strict one-on-one battle system at any given time. You can switch between each team member at will, and combine for special assists. The winning team is declared when either one team’s fighters have all been eliminated or the timer runs out and the side with the most remaining characters/health win. Rather than have these battles take place on a 2.5D plane like Street Fighter, you’re given a large 3D arena-style area to duke it out in, complete with destructible objects and scenery you can K.O. smash your opponents into in an oh-so satisfying manner. The actual combat is a simple affair. You have your standard attacks, special attacks that are unique to each character (such as the Logia attacks), and a block/counter system. The game also features support characters that act as boosters. Some will amp your damage, others will give you an instant special attack. They have a limited use though and need to be purchased again once they run out (with in-game currency mercifully). Otherwise, combat is quite simplistic at heart, something that initially makes the game easy to get to grips with, but beyond this, there’s little depth or nuance to it that makes you think it could be worthy of any long-term appeal for online fights. A love of the subject matter will definitely carry you through the slog of repetivity later on, but there’s no denying it all gets a bit tiresome after a while.

Much of the appeal of Burning Blood most likely lies in the presentation. The visuals take on a cel-shaded look that best represents the ongoing anime’s art style, and it all looks like a wonderfully accurate showing of the series’ charm. Bright flashes of color from the special attacks, fluid animation of each character’s signature styles and nice little touches such as kanji echoing your footsteps; Burning Blood is a lovely-looking game at times, even if the environments are given a fair bit less of the love that’s been afforded to design of the eclectic cast of pirate crews that scrap in them. At its best, Burning Blood dazzles with the sheer array of vivacious colors and fast-paced movement occurring onscreen, but when things are slowed down, it loses a bit of that wow factor as you see more of the underwhelming scenery and the rigidity of the character’s regular movement. That the worst you could say about it is that it can be ‘only solid-looking’ is testament to the work put in by developer Spike Chunsoft on that presentation. 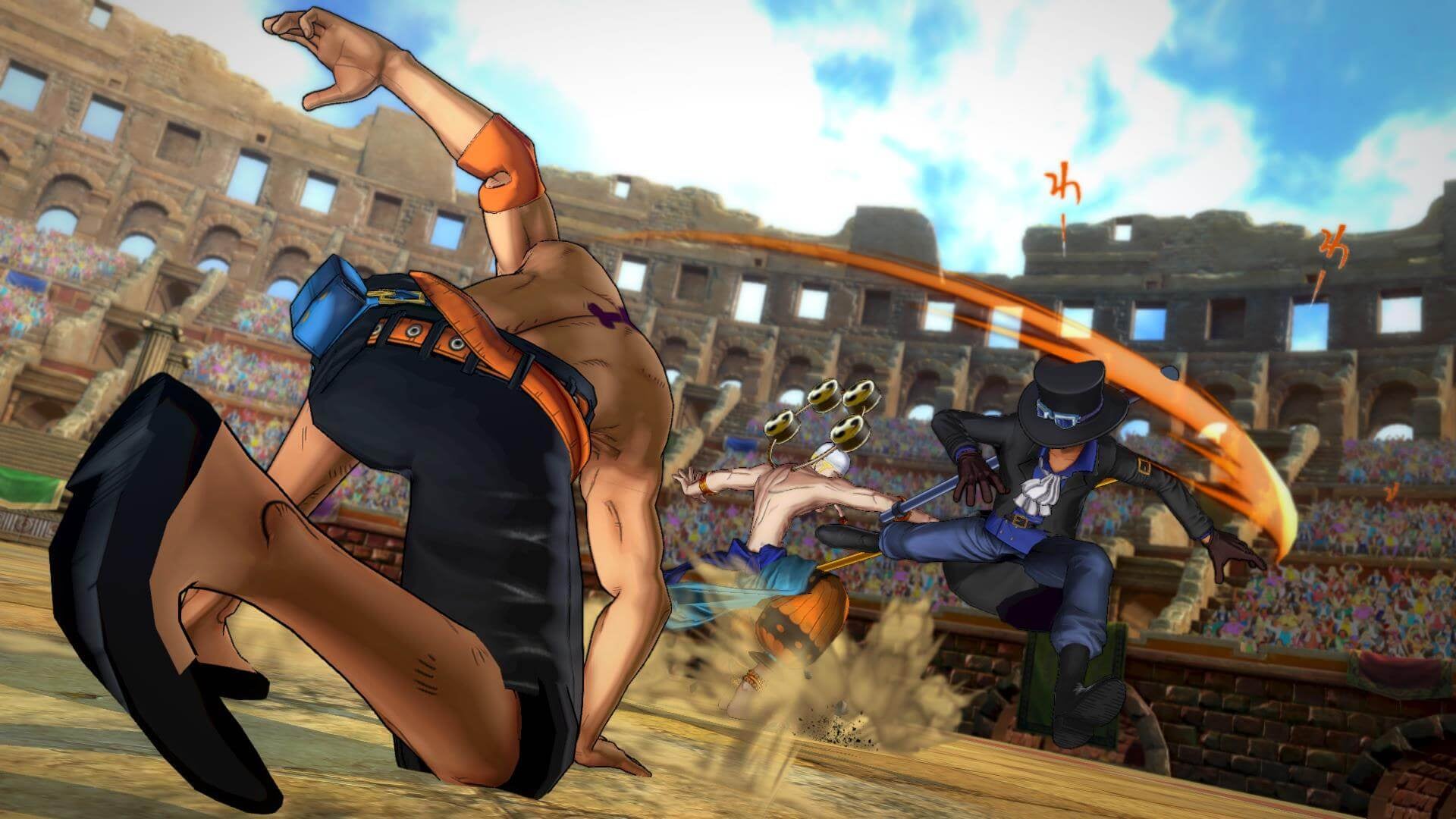 The developer has also been fairly generous with modes for Burning Blood as well. The standard 3v3 combat is supplemented by the expected online fights, a store for buying new characters with your in-game currency, WANTED challenges that let you bounty hunt characters for a tasty fee if you can defeat them in the way the contract states, and then there’s an online war mode that asks you to pick a side in the pirate war and contribute to the cause by winning fights against the A.I. or other players. It’s the standout mode personally speaking, though it is riddled with similar issues to other modes that I’ll go over shortly.

On top of that is the previously mentioned story mode that casts you as a certain character and puts you through a series of fights (usually 1v1) that loosely tie together. It starts fairly easy, enjoyable even, giving you a little story sample before you go in and trounce some scrub, but out of nowhere, the difficulty spikes tremendously. One fight saw me absolutely destroy my opponent with consummate ease, while the next fight saw me unable to so much as land a punch before being decimated. In this and other modes, there is an infuriating gulf between difficulties; it’s ridiculously easy or dumbfoundingly hard and with little in between. Coupled with combat that’s too light on variety, you have a terribly disappointing fighter. A middle ground, and more accessible training techniques would do wonders for the game’s longevity. 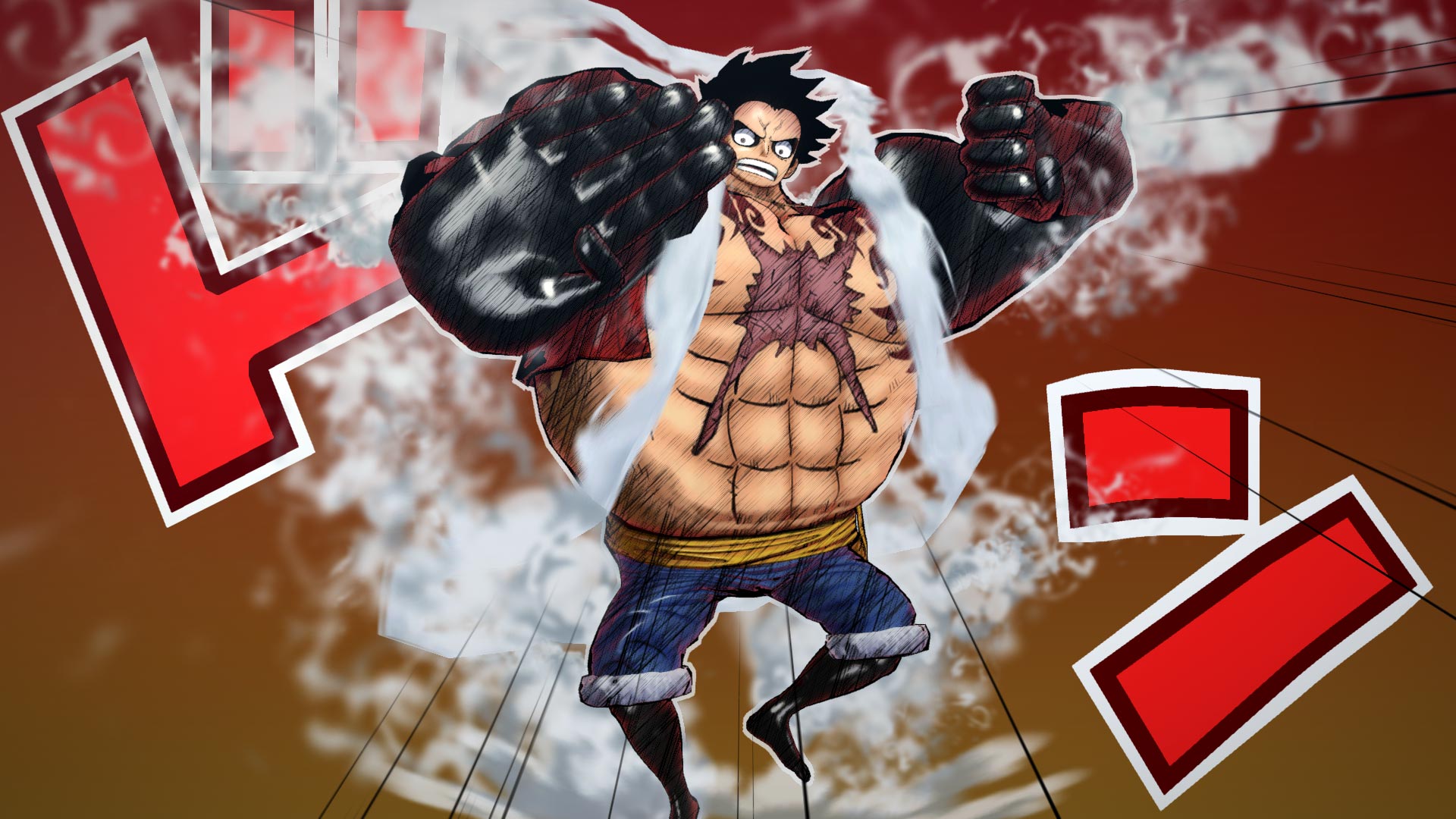 One Piece: Burning Blood will be a pleasing experience for fans for at least a few hours. Beyond that, hurdle after hurdle pops up to try and scupper your enjoyment, so results may vary. Online seems to be the best shot at getting any long-term mileage out of Burning Blood, especially with the faction-based real time pirate battles. Nevertheless, the air of what could’ve been hangs over the game like a heavy fog at sea.

There’s joy to be had in One Piece: Burning Blood. It’s initially fun and colorful fighting fare that evokes the feel of the anime series superbly. A lack of nuance in the combat, extreme difficulty spikes and the growing sense of repetition all conspire to strangle that joy right back out of the game.