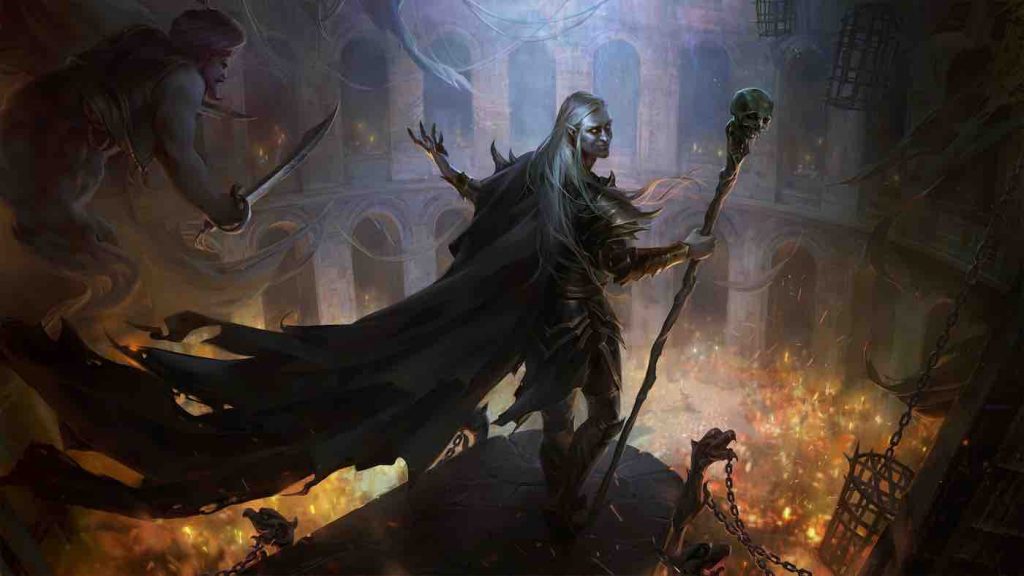 Part of a wider initiative to bring the classic RPGs of the late 1990s and early 2000s onto console, an enterprise headed up by the supremely great Baldur’s Gate: Enhanced Edition Pack no less, the Planescape: Torment & Icewind Dale Enhanced Edition Pack (if it’s less possible for these games to be any less of a mouthful, I’ll invite the adjustment), brings a pair of critically acclaimed adventures to the PlayStation 4 for the very first time.

Quite unlike the concurrently released Baldur’s Gate twin-pack however, which are like-minded adventures of equal lofty calibre, the pairing of Icewind Dale and Planescape: Torment affect a different and somewhat uneven stablemates of a relatively traditional fantasy adventure, and a cosmic, often darkly comedic odyssey that has long carved a niche among its genre peers.

Distancing itself from the storylines of other Bioware titles of the time which sought to cast the player as a somewhat typical protagonist in charge of a party of like-minded companions, hellbent on the destruction of some evil force, Planescape: Torment instead takes a very different approach to storytelling. Cast as a mysterious individual known only as ‘The Nameless One’, players are soon clued into the fact that the main protagonist is immortal – death bringing only the erasure of his/her memories rather than an end to their existence.

From here, players must guide the Nameless One across the Dungeons & Dragons Multiverse in order to regain their memories and understand why they were granted immortality in the first place, as the Multiverse reveals itself to be an intoxicating cornucopia of many different planes of existence in addition to primal pockets of the universe never explored by mortals.

In short then, Planescape: Torment is a bit of a trip. Beyond the exotic trappings of its cosmic setting, Planescape: Torment also veers away from the much more combative nature of the Baldur’s Gate games, preferring instead that many more of its confounding situations be resolved with wit and intelligence, rather than the business end of a blade or the warm end of a conjured fireball.

Blessed with some of the best writing ever seen in an RPG from industry leading scribe Chris Avellone, Planescape: Torment, like the Baldur’s Gate games before it, bears this out most notably through its indomitable cast of characters. A particular highlight is the routinely sarcastic floating skull Morte, who joins the Nameless One at the beginning of the game, feeling somewhat guilty at having caused the death of the main protagonist at some earlier juncture in a previous lifetime, Morte acts as a running commentary of everything that the player does; often to highly amusing effect.

Dealing with weighty themes of existentialism, identity and destiny, Planescape: Torment is a supremely deep affair but it’s one that players who have played its psuedo-sequel, Torment: Tides of Numenera, will surely find warmly familiar and gravitate towards. The other half of this package in Icewind Dale however, is by turns, a much more conventional, albeit frosty fantasy affair.

Starting off in the frigid township of Easthaven, the player takes control of a party adventurers who soon find themselves drawn towards Kuldahar, a mysterious town from whence whispers of a nameless evil have become emanate. Hardly offering anything unique from a fantasy narrative perspective then, but Icewind Dale still manages to thrill reliably – not least because the game is built and remastered around the same hardy and enjoyable framework seen in the Baldur’s Gate games.

Though mechanically, this means that Icewind Dale is hardly different from those aforementioned titles, it does lend some measure of comfort; allowing those who are knowledgeable and experienced with those games to get started with the game very quickly indeed.

And this is the thing – both Planescape: Torment and Icewind Dale follow that same design throughline which so deeply defines the Baldur’s Gate titles which have preceded them. As the main protagonist, you’re able to build a party through encounters with new characters that you meet in your travels, engage in hugely branching, non-linear conversations and make decisions that affect the wider arc of the overarching narrative in both minor and major terms.

Equally too, combat unfolds similarly, with that same hybrid real-time approach which allows players to strategize on the fly and attempt to control the ebb and flow of conflict as best as they can according to their tactical acumen and power levels of the individuals involved.

Though smaller than the Baldur’s Gate: Enhanced Edition Pack on account of the simple fact that Icewind Dale boasts two expansions in the Heart of Winter and Trials of the Luremaster add-ons and Planescape: Torment has no additional content beyond the base game (though as part of the Enhanced Edition suffix for Planescape, developer Beamdog have restored an amount of previously cut content), that doesn’t erase the fact that these two games still offer hundreds of hours of gameplay.

Certainly also, there remains no upper limit on being set on the time needed to be able to replay them to explore different narrative permutations and discover new events that may have been missed previously, too.

Though both games featured in this pack are the Enhanced Edition variants, boasting all the audiovisual presentation trimmings one might expect in addition to other meaningful tweaks such as the myriad and welcome difficulty presets seen in the Baldur’s Gate pack, there are some elements of the presentation in each which don’t quite stand up to scrutiny.

Ostensibly, the biggest issue with both games suffer is that the pre-rendered cinematics (of which there are mercifully few), have been barely remastered, making the low-res videos from 1999/2000 look especially blocky and difficult to look at on today’s much larger 4K television sets. In the grand scheme of things however, it is a relatively small issue that should not impede the enjoyment of this impressive twin pack of classic adventures.

As alluded to earlier in this review though, it’s clear that Planescape: Torment should command the lion’s share of the attention. Though Icewind Dale is a thoroughly enjoyable and endurable RPG that can and will reliably swallow up your social calendar without mercy, it’s the brave storytelling, superb characters and endlessly clever thematic weaving of Planescape: Torment that really provides this pack with its difficult to resist lustre.

A formidable twin-pack of classic RPGs guaranteed to wreck your social life, it's really the manifestation of Planescape: Torment on console for the first time which stands as the real highlight - bringing its stellar writing, extraordinary setting and deep characters to a whole new audience. This twin pack is a must-have for fans of RPGs everywhere.