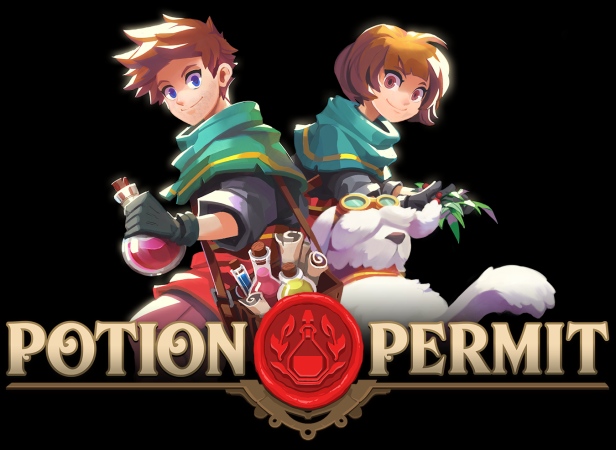 Potion Permit Review (PS5) – The Life Sim genre has been around for a long time, but it was only in the PS4 generation that I finally wrapped my head around it.

I thank Stardew Valley for that. Since then, that game has been the bar for my expectations of the life sim genre.

While Potion Permit doesn’t meet that lofty mark, it makes a fantastic case for itself.

Your customized character works for the Capitol as a chemist. Upon a special medical request, the Capital sends you to the small town of Moonbury.

Much to the chagrin of the locals, the town mayor tasks you with curing his daughter of a mysterious ailment.

Not long after you arrive, you learn that the last chemist to come from the Capitol caused some long-term problems with the town. Needless to say, the populace isn’t excited about your presence in the least. 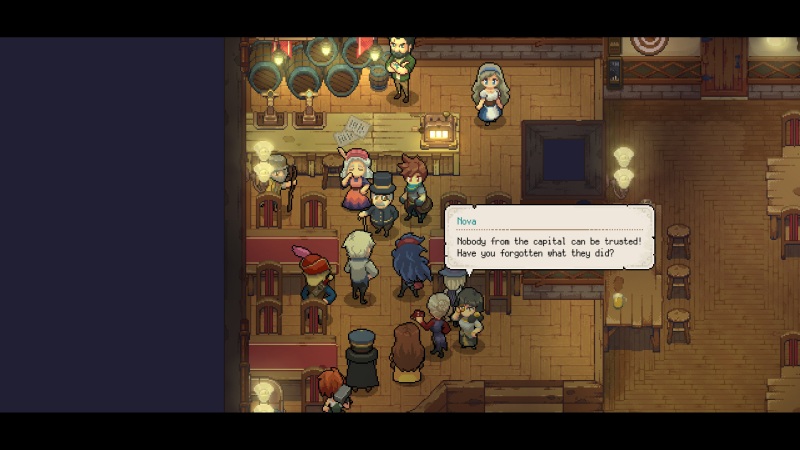 The pixelated visuals of Potion Permit take on a more detailed version of what you find in Stardew Valley.

This adds a more vivid touch to the visual style without moving too far away from what makes the simplistic style feel special.

One key feature to games like this is developing social connections with the in-game community.

Potion Permit sticks to that tradition but streamlines it a bit. Each day, you gain relationship status with each person to talk to.

As long as you talk to everyone every day, you max out all relationships. At each change in relationship status, that character presents you with a side quest to help them in some capacity.

Doing so opens up the next relationship tier, and so on until maxed.

Not all characters can be romanced, and the character menu makes sure to indicate immediately if a character can or cannot be in a relationship down the line.

Depending on your motivations to gain status with different characters, this helps you focus on characters from the beginning instead of learning later on that they don’t want a relationship. 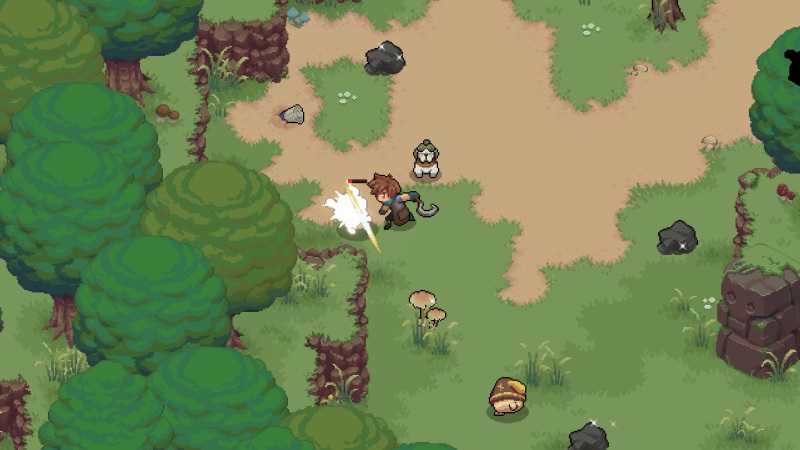 To make things a bit quicker, each quest or main event you complete rewards you with a bag of local tea. Gifting that to any resident in town gives large boosts to their relationship status.

Considering how often these come your way, developing relationships doesn’t take more than a couple weeks of in-game time, with each day only ten minutes or so.

One of the first bigger milestones motivates people from the town to start cleaning up parks and paths by clearing out weeds.

Up until that point, the formula felt a little more rudimentary than other games like it. When this happened, though, Potion Permit took on its own twist to the formula, and I dig it a great deal. 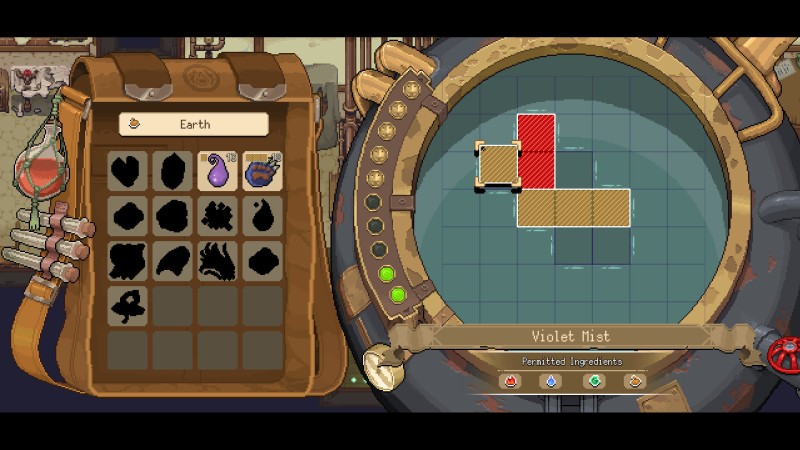 During your time in Potion Permit, you maintain the local hospital and treat locals as they come in.

Different parts of their bodies are identified as the problem area, and your analysis indicates how to remedy the issue.

If you don’t already know the problem, you then face a mini-game that poses as research.

As long as you pass the mini-game, you succeed at determining the problem. You then return to your cauldron and craft the necessary potion to fix the ailment.

All crafting channels through the cauldron. While you constantly receive new recipes as you progress, crafting doesn’t require specific ingredients. 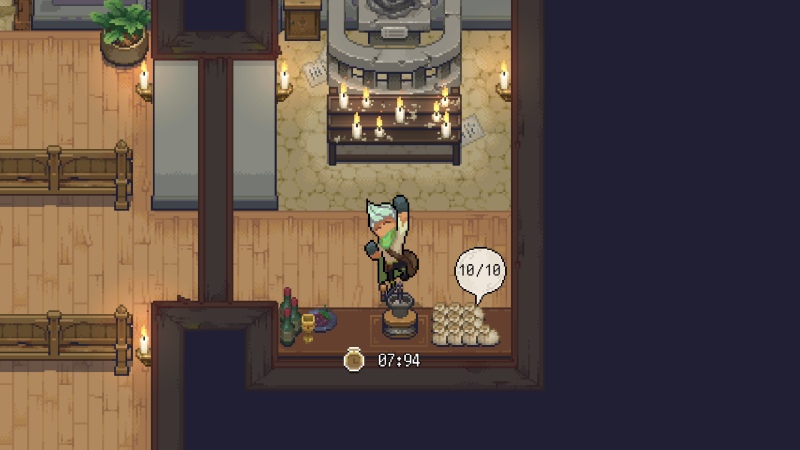 Instead, each recipe works like Tetris and each ingredient gives you a distinct shape. You use those shapes to fill in the Tetris-like void, and the recipe is completed.

This makes for a welcome simplification of the crafting systems in other games of this ilk. Getting specific ingredients can take a ton of effort, and your progress often depends on crafting those items.

With this system, you still need to gather your own materials but don’t need the kind of time it takes to grind out different amounts of specific items.

The only limitation to this is how many different ingredients you can use at once. As you improve your cauldron, you can then use more ingredients. Initially, the game gives you the capacity to use five ingredients.

If you can’t fill the Tetris-like shape using five of your ingredients, then you need to unlock a different part of the map and find new items with bigger shapes. 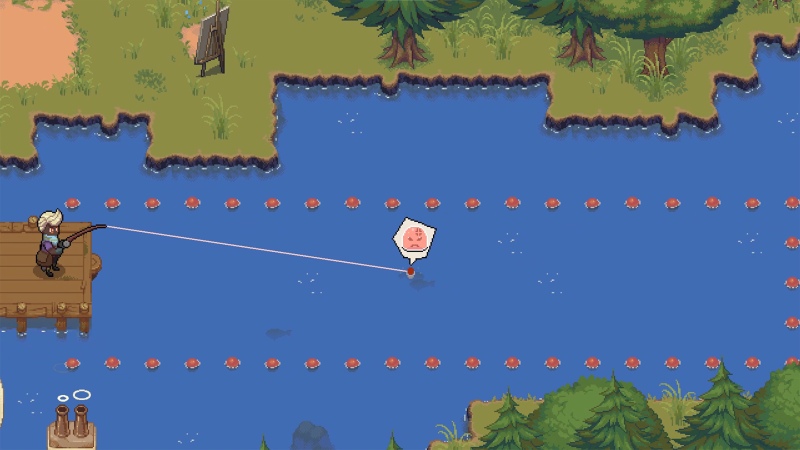 I do however find a couple things keep me from seeing Potion Permit as an instant classic. The big one is the way the game delivers its characters. The cast consists of a vast array of individuals with their own roles and interests within the community.

At the same time, they lack that certain level of emotional connection that I got from Stardew Valley characters. Only a few times in Potion Permit did I stop and just take in a situation with a response strong enough to physically respond as well.

The scenarios are still intriguing, but they don’t have the same oomph.

Gathering ingredients is only done by roaming the map and picking them up. These ingredients, even trees, refresh every single day, so development takes very little time in comparison to other games like it.

This, alongside other points I mention above, makes Potion Permit a fantastic entry point into this genre.

At the same time, it reduces that level of investment needed to develop the town and community. In doing so, the overall attachment to the game world and its inhabitants just doesn’t develop as strongly.

Don’t get me wrong: It’s still very fun to run around and develop the world around you. It just doesn’t have the same level of intimacy to it. I don’t see this as an inherent negative, though, since the quicker pace of the game welcomes newcomers far more than other games like it.

The latest patch cleaned up a bunch of glitches, including one that halted progress completely. However, whether intentional or not, a new change appeared with this new update. The fishing mechanics, which once showed a line strength gauge for reeling in fish, no longer appears.

Now, you must rely on the movement of the fish as well as the color of the line. If the line goes red for too long, it breaks. Again, I’m not sure it’s intentional, but I don’t hate that fishing works this way now.

A Fantastic Life Sim For Everyone

The biggest appeal to Potion Permit is it adds simplifications to the town sim formula found in games like Stardew Valley and Rune Factory.

From the very beginning, it offers fast travel points, fewer items to gather and manage, and a much easier system to craft new things along the way. It’s not as good as other, more well known life sims out there, but Potion Permit is much more easier to get into.

Potion Permit offers up quite the accessible life sim experience, making growth progress more quickly than most games in the genre. A bit of the luster is lost in this change of focus, but the product itself is a fun, engaging, light-hearted, and accessible time.