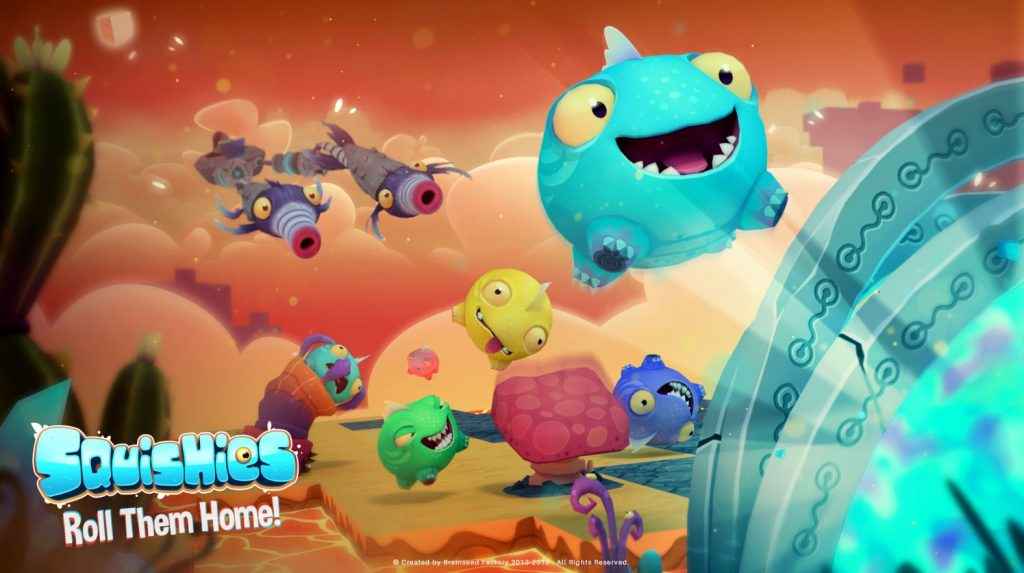 I was delighted when given the opportunity to review Squishies, the new puzzle game by Brainseed Factory. Brainseed are the creators of one of my favorite Vita experiences, Typoman. Squishies’ trailer indicated that the game would be a delightfully colorful puzzler, with charming characters and a fun new control mechanic. Due to its great sense of scale and perspective, PS VR lends itself well to unique puzzle experiences, so I was all set to settle into some serious brain-bending gameplay.

A Swing And A Squish

My excitement soon turned to confusion – then frustration – when I realized that Squishies is hardly a puzzle game at all, but is more akin to a test of…I don’t know what it’s a test of, really. Motor skills? Patience? Trial and error? Ability to suppress the urge to hurl a Move Controller at the wall?

The issue is not that Squishies is poorly made. On the contrary, Squishies is a finely polished game – with great Move Controller tracking, beautiful visuals, and elaborately designed levels. The problem is, the core gameplay dynamic is so frustrating, I could barely bring myself to continue playing the thing.

In Squishies, players are charged with maneuvering the spherical titular characters from Point A to Point B along a series of increasingly complex paths. This is achieved via the use of the Move Controllers, which take the form of “Fish Guns” in the game. By pressing either the Move button or the trigger, each Fish Gun will either blow air to propel the hapless Squishy forward, or vacuum the Squishy back towards the gun.

If this sounds incredibly imprecise, that’s because it is. Picture Marble Madness, but instead of being able to directly influence the marble or tilt the playing field, you can only move things along via wind power. The issue with this dynamic is that wind is a buffeting force; fail to point the Move Controller precisely where you want it to go, and the side-stream of air will blow your Squishy off course and into the drink (Squishies drown).

And while the tracking work done on Squishies to stabilize the performance of the Move Controllers is admirable, let’s face it. Move Controllers aren’t exactly known for their amazing pinpoint precision.

As a result, by level 5 I was approaching each new level with the same thrill of excitement and anticipation that I experience when preparing to bury a beloved family pet in the backyard. This is a game that ramps in difficulty extremely quickly, and there are over 100 increasingly difficult levels in Squishies. New gameplay dynamics are eventually introduced, but only the most patient of players will ever see them, as I imagine most will bounce before ever completing the first world.

To Squishies’ credit, there are not fail-states, really. Knocking your Squishy into the water will just reset you to the last checkpoint you managed. But when something as simple as rolling a Squishy up a gradual incline involves repeated failure, it starts to feel like Squishies is trolling the player a little bit.

For the truly inspired players, there are also collectibles scattered about and secrets to discover. But in its current state, I can’t imagine that most players won’t abandon these optional goals in favor of simply trying to limp to the end of the level.

Awesome Camera Controls, But Not For This Game

The developers behind Squishies have achieved a great new camera control system. By pressing the “X” button on either controller, players can slide the playing field in any direction they wish. Pressing buttons on both controllers simultaneously will allow players to rotate, expand, and shrink the board in order to get any view on the action they see fit.

This is frankly one of the best camera solutions I’ve seen for a game of this type, and I wish this camera system would be implemented for other strategy titles (it would be great in Dark Eclipse, for example). But for Squishies, the camera controls just end up feeling like work.

Because players’ little round buddies are constantly moving through the level, players are constantly having to move and adjust the camera. Blow the Squishy forward, and you find yourself walking the camera forward, taking several arm motions to keep up. Then you have to rotate the camera to get a good view on the action. Then you have to adjust the size of the playing field to make sure you have a good angle with the fish guns. Fiddling with the view is constant, and tiring.

Then, when you finally get the perfect angle, you blow the Squishy with the Fish Gun, and he plops into the water and promptly drowns. Whee!

What Are Squishies, Really?

Part of my issue with Squishies is that the Squishies themselves just aren’t that interesting. Being round and completely passive, they aren’t exactly scintillating primary videogame characters. Sure, they are cute, but they don’t do anything but get rolled around.

I found myself wondering about the Squishies’ origins. What environment did they evolve in that allowed them to thrive and reproduce with zero motor function (or personality)? I would say that they developed in water, but as I mentioned, Squishies drown immediately on contact with H2O. The fact that I found my mind wandering to these topics indicates just how uninvolved I was with Squishies’ gameplay.

Even a slight bit of character would have made the entire game more palatable. A “Squeeee” sound effect when you sent the Squishies rolling, or a “Glub Glub” when they drown for the umpteenth time (did I mention that Squishies drown?). Or a little voice that complained the entire time about players’ poor Fish Gun skills. I don’t know. Something. Anything.

For those that do enjoy Squishies (I know such masochists are out there), there is an abundance of content. More than 100 levels, separated into three worlds come with the game.

In addition, there is a robust level designing tool that will allow the community to build and share an endless number of additional challenges. I spent some time playing with the level editing tool, and found it to be intuitive, quick, and fun to play with. But my creativity meter runs pretty low with tools such as this, so after determining that the level editor was functional, I bailed pretty quickly. Not the game’s fault, level building is just not a thing that I find personally interesting.

In the end, I found myself simply wishing that Squishies had a different control scheme. There is a whole game here, I just found it mostly unplayable. If the developers patched in a Marble Madness-style control option, I would probably happily revisit Squishies. It really is a beautiful game, and the great care taken in its construction is obvious.

I can’t fault Squishies as being broken, or poorly designed. Everything is there, highly polished, and functioning as it’s supposed to. I just didn’t enjoy the core gameplay mechanic. No matter how beautiful the frosting, if the cake is this bitter you won’t want to choke it down.

Squishies is a beautiful game that introduces a new, unique gameplay mechanic that unfortunately simply isn’t very fun. With a game design that requires precision, vaguely influencing characters with wind is incredibly frustrating. Don’t be fooled by the attractive art-style, if you are seeking a kid-friendly puzzler, this ain’t it.