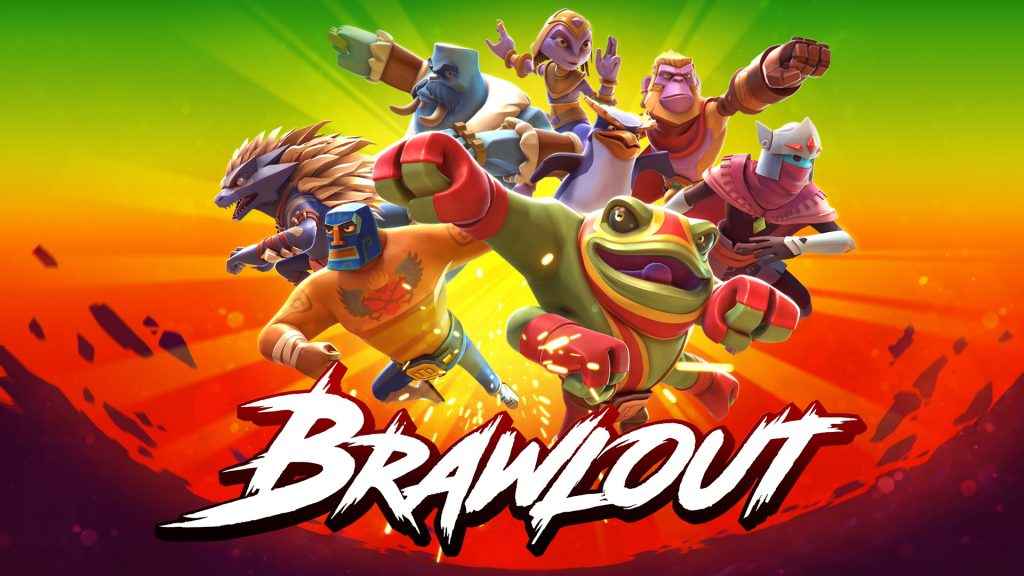 In this Brawlout review, we’ll see if this Smash Bros. clone can hold its own on the tournament fighting stage, and whether or not casual gamers and indie game fans can find something to enjoy as well.

Brawlout is, for all intents and purposes, Smash Bros. starring some of your favorite indie game characters.

Released originally on PC in 2017, Angry Mob Games brought in characters from indie hits such as Guacamelee and Hyper Light Drifter to duke it out in a fast paced free-for-all.

Now released on the PS4, Nintendo Switch, and XBox One, everyone can jump on the Brawlout train. Players can choose from up to 21 characters, though two-thirds of the roster are skin variants that play the same as the core characters.

The goal of each match is to attack your opponents to build their percentage up to and beyond 100%, which makes them easier to knock off each level’s platforms. Each time a player is knocked off, they lose a life, and the last adorable-indie-hero (or villain) standing wins.

The core characters all have their own unique abilities and style of play, but all characters share the same basic attacks.

Pushing square by itself is a standard strike, and the action can be modified by moving the joystick to perform different actions, though in general each character has an up, side, and down square attack, as well as standing and side special attacks using triangle.

Each character can also dodge using the L and R buttons, and utilize a rage meter that builds overtime by attacking and defending by pressing both L1 + R1 or L2 + R2 together. If the meter is half-full, you execute a combo breaking ability that is useful for interrupting your enemies. When the meter fills completely, you go into rage mode and deal and receive less damage and knockback, making it perfect for turning the battle in a pinch.

Ultimately it will be up to you to determine who fits your playstyle best, and you may want to master a couple of characters, especially if they are from your favorite indie title.

The combat is frantic, fun, and hectic in all the best and worst ways. If you’ve played any of the Smash Bros. titles, it will feel familiar but not quite as tight. Several of the characters do have balancing issues, and collision detection can be wonky sometimes which in the pitch of battle leads to more frustration than fun.

Movement is smooth, and learning to play is easy for all ages, so your button-mashing siblings can enjoy Brawlout as much as tournament level pros, a fact that is reinforced by the colorful graphics and character animations.

Speaking of, the characters all look absolutely adorable, from the cat like sand princess Sephi’ra, to the blank blue-face and beady eyes of The Drifter, Brawlout is no doubt another fine addition to the growing number of games with cute characters beating the living hell out of each other. This is clearly where all of the effort went though, and although not a bad thing for a tournament level fighter, the menus, sound effects, music, and dialogue in Brawlout are very simple, and have a rather sub-par feeling.

For example, starting the game on the PS4 for the first time I wasn’t sure if my sound had gone out or not, as it showed me two characters in the air during a bullet-time punch and there was no music or sounds. It just felt odd.

Loading screens in Brawlout are uncomfortably long, and sometimes the little “B” logo that is animated freezes, leaving you in a Schrodinger’s limbo of uncertainty as to whether you need to wait patiently or reset the PS4.

Dialogue doesn’t change for the character variants either, just the name. This means beating the single-player arcade mode with any unlocked character variant will only show the main character’s ending they are based on. The single player mode is a perfect place to train however, as the harder difficulty tiers will really test your mettle as a Brawlout champ by throwing 2 or 3 enemies at you simultaneously. It’s a great challenge and will really get your heart pumping right before you put your controller through the wall.

Playing will earn you experience points to level up your characters and unlock the character variants and other rewards. Winning will reward you with coins and pinatas, which you can break open for more coins to purchase more stuff in their store. Daily login bonuses are also present, and streaks do reset if you miss a day.

As I said though, the focus here isn’t on the rest of the game. Brawlout was designed to be a tournament level fighter, and the devs have many future events planned that you can participate in for Brawlout glory, and put their controllers through the wall instead.

If you’re in the market for a new tournament level fighter, Brawlout is worth checking out. If you’re looking for a good game to play with your kids or siblings…maybe pass on this one, those button-mashing little bastards will make you question your stance on corporal punishment.

A tournament level fighter strictly focused on being that and nothing more. Though the rest of the game suffers, with multiple modes to fight in, including online and couch co-op and tournaments abound, this is a good fighter to pick up if you're looking for that specifically, or just want a decent Smash Bros. clone for your kids.