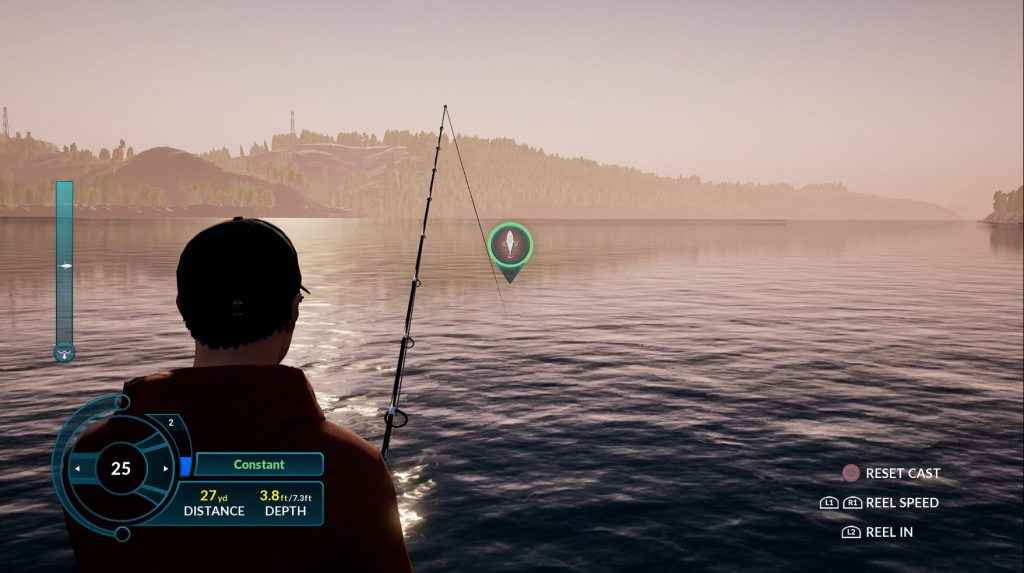 From the moment I booted up Fishing Sim World on my PlayStation 4 dashboard to the moment I closed the game, I was hit by one feeling. That feeling was boredom. Dovetail Games attempts to offer a realistic fishing experience with Fishing Sim World. In doing so, they forget that they have made a game, leaving an experience that is more monotonous and ugly than fishing in real life ever is.

Fishing Sim World offers a number of different ways to fish. Freedom Fishing allows exploration of a number of different lakes to catch different types of fish with no restrictions. There are also Tournaments that asks you to catch the largest fish of a particular species, attached to that is a time limit. Finally, there are multiplayer sessions where you and random people, or friends, can fish together in friendly competition.

These modes though don’t feel different from each other. They all are indistinguishable from one another. The time pressure in Tournaments doesn’t have much weight behind it as finding fish is down to luck. Multiplayer is not interesting either as the maps are so big that meeting other players takes a long time. They all just end up with me driving my boat near the centre of the lake and fishing. There is almost no variety in what you do in Fishing Sim World. There is some variety when it comes to items in your fishing inventory, allowing you to switch fishing rods, bait and more. These can affect gameplay, such as some baits not working on some lake surfaces. However, the game never really explains these effects and changes, which left me to work it out for myself.

In fact, the game does not explain anything at all. There are tutorials; however, these are videos that told me about the mechanics of the game rather than guiding me through them. It would have been much more effective if the game taught me as I was playing, instead of having to traipse through menus to find the right video to watch.

Fishing Sim World Fails The Most In Its Gameplay

Along with these issues, the aforementioned monotony and boredom is present in the gameplay of Fishing Sim World. The gameplay is what makes the game not even worth checking out. The actual act of fishing is easy to get a hold of as by default, control of the rod is automatic; however, the settings can be changed to offer full control of the rod. I also had control over the speed of my reel and line tension no matter what setting I was on. Fishing itself does not translate well in this hyper-simulated environment Dovetail Games has created. After casting I was left waiting for a fish to become interested in the bait. I kept waiting and waiting until I got bored, reset my reel and tried again. This process just repeated. The few times a fish actually appeared and I began to reel it in, it did not feel satisfying. There is no feedback in the controller, you can’t feel the fish pulling against you. The actual act of fishing was not satisfying, ever.

I hate to make a comparison to a triple-A game, but Far Cry 5 does fishing better and it is a side activity in that game. When another game’s side activity does the core mechanic of your game better, something is definitely wrong.

The Visuals Are Not Enticing Either

The visuals of Fishing Sim World do not exactly make up for the rest of the game’s flaws. I think the game knows this because it will happily shove real-life photos in front of your face at any opportunity it gets, whether it be people or fish. Character models look flat with almost no expression and personality.

The choice of customisation for my character was just as drab, mostly consisting of t-shirts and trousers consisting of one shade of a handful of colours. The environments surrounding the lake I was fishing on had the visual appeal of an overflowing rubbish bin, especially the models and textures of trees. They looked like they were still a work in progress.

In fact, the entire game still feels like a work in progress. Animations look unnatural, especially when my character was holding the rod above his head. There is also no animation for resetting a fishing line. The screen simply fades to black and the hook is now magically reeled back in. The game also has a number of bugs.

At times my screen would just cut to black for a few seconds before returning to normal. At times, reeling in my hook would not cause the rod to reset, it would just stay in the water. On top of that, the game also has long loading times that drag for far too long.

Fishing Sim World is an experience that is devoid of any entertainment and enjoyment. It is a soulless simulation game that does not work properly and has no tangible goals to work towards. Even lovers of fishing will not find anything worthwhile here, as the actual act of fishing is bland and a chore.

A wholly unenjoyable experience, completely devoid of any fun and intrigue. Fishing Sim World couples that gameplay experience with ugly character models and environments, leading to a game that quite literally has nothing going for it.