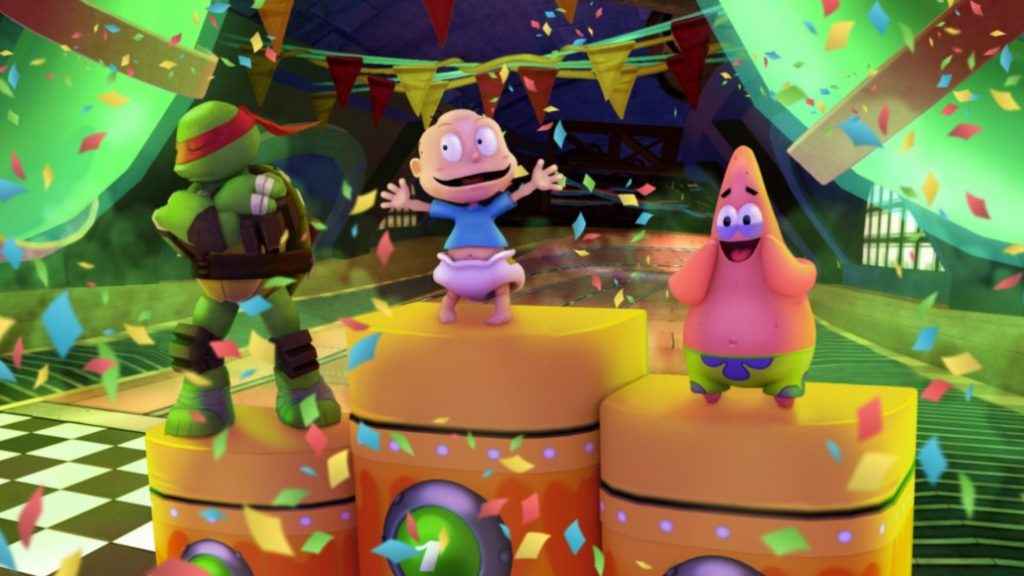 There’s no better way to review a game meant for kids then by letting your kids review it for you. So that’s exactly what we’ve decided to do for Nickelodeon Kart Racers, a Mario Kart-style racing game aimed squarely at a young audience.

Step forward, Amelie aged-10. She’s been a gamer for about two years and loves playing Stardew Valley, Spelunky and Tembo The Baddass Elephant. She also has some experience with karting games, having spent many an hour playing Mario Kart 8 on Switch.

Other than helping her out with punctuation and overall flow of the review by asking her thoughts on the game, the entire review from this point forward has been written by her.

Nickelodeon Kart Racers From A Child’s Point Of View

When I saw some of my favourite Nickelodeon characters I couldn’t wait to play. There’s SpongeBob SquarePants and Patrick, the Rugrats and the Teenage Mutant Ninja Turtles*. In total, there are 12 characters. I wish there were more characters like Mario Kart 8 because it gets a bit boring choosing the same ones. They also don’t talk or make any noises.

They have speech bubbles though, and say some funny things. It’s a bit of a copy of Mario Kart 8. There’s the same game modes like Grand Prix, Free Race and Battle Arena. You also pick up items for power-ups and can upgrade your kart by collecting coins and buying stuff in the shop.

You race against the other characters and can play with your friends or your family. I played with my brother. He’s 5 and not very good at Mario Kart 8 and doesn’t want to play, but he was excited to play this game because he likes SpongeBob.

Some of the tracks are a bit too long over three laps, so it can get boring, but there are a lot of tracks. There are 24 tracks and they have backgrounds from the Nickelodeon shows. I saw Spongebob’s house in a level called Bikini Bottom Boogie Heights. That was cool.

You pick up coins on the tracks and can spend them in the shop. The shop is great. I bought an item that made my kart faster at accelerating. I like the green slime on tracks too. You drive over it and it gets added to a slime meter. You can then use it to boost. I won two races right at the end by using my boost. The power-ups are great! Many are like those in Mario Kart 8, but they look different, things like baby’s bottles, pizzas and sewer lids. The pizza power-up is my favourite because you can smash pizzas in the faces of other riders to blind them. There’s loads of power-ups.

There’s one where you smack riders in the face with the thing that my mum uses to take chips out of the oven and a bomb that is an acorn. There’s also a special ability for each character. I wasn’t expecting that.

It feels easier to control the karts than Super Mario 8, so I’ve got more chance of winning, which I like. Drifting feels a bit weird though. It’s hard to explain but it doesn’t feel as smooth as Mario Kart 8.

The music gets on my nerves a bit because it’s quite repetitive, but the graphics are nice. There’s lots of little details and things to look at. I couldn’t find any shortcuts though, like Mario Kart.

It’s definitely a game for younger children between the ages of 5-10. I would definitely recommend playing Nickelodeon Kart Racers. I’ll be playing it again, and if you’ve got a younger brother or sister too, they’ll love it.

It’s not as good as Mario Kart 8, but I think that’s more for adults. I like Mario Kart but I’m not that great at it. I can win on this game, so I like it. My dad beats me on Mario Kart 8 all the time so it’s frustrating. I get hit a lot. In this game I don’t get hit much and I have more chance of winning.

Let us step in for a conclusion. This is the first review on PSU where we’ve asked one of our children to write it to provide a different perspective. After all, it’s children who will be playing the game and it gives those parents thinking of picking it up an honest opinion that isn’t tainted by years of playing brilliant Mario Kart racers!

The score has been chosen by Amelie, and we stand by her opinion.

If you like Nickelodeon and you’re a kid, you’ll like it. It’s not as good as Mario Kart 8, but it’s still good fun.