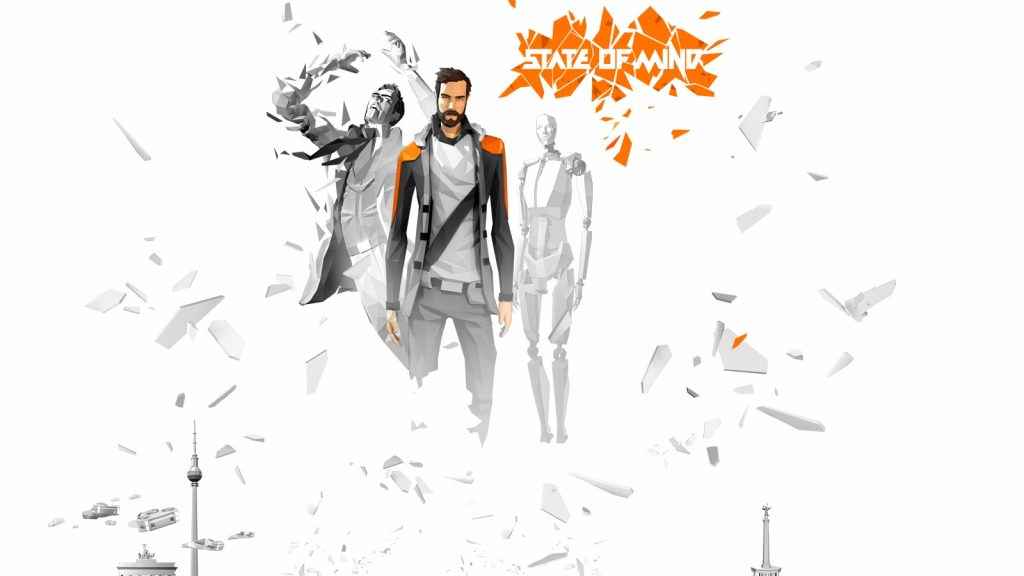 Boasting the practiced and well-calloused hands of a stalwart crafter of adventure games for more than a decade, German developer Daedalic Entertainment has applied its genre know-how and penchant for resonant storytelling with State of Mind, an ambitious effort that infuses the traditional narrative adventure with hefty themes of transhumanism and existential preponderance.

From the taut narratives of Phillip K Dick to the sprawling manga and anime meditations of Ghost in the Shell creator Masamune Shirow, the very notion of transhumanism, the concept of using technology to effectively transcend our fleshy human shells into becoming something else, is one that has fascinated science fiction authors the world over for many years. Of course, gaming is no stranger to such weighty discussion and indeed Quantic Dream most recently took a run at the topic with Detroit: Become Human, an admirably glossy and entertaining effort that ultimately tackled such ideas with all the subtlety of flaming sledgehammer.

To that end, anyone who found themselves left cold by Detroit’s decidedly ham-fisted attempt at tackling such sophisticated subject matter will appreciate the sophistication and depth of State of Mind’s exploration of such dense topics. As Richard Nolan, a controversial tech journalist locked in the grim urban sprawl of Berlin in the year 2048, players are tasked with locating his wife and daughter after a brutal car crash leaves him less than sure of his own memories and senses.

The setup is a poignant one – not least because provides a well-crafted inroads into State of Mind’s multi-themed and sophisticatedly layered narrative that posits how Virtual Reality exists alongside (and often in opposition to) reality, and how the existence of VR, humans and robots frequently and often seamlessly intersect with one another. Another reason why State of Mind’s story setup functions so well in this regard is because all these heady themes are actually wrapped around a very down to earth set of circumstances – a man simply wants to reconcile his family and will go to great lengths to do so.

Indeed, an absolutely gut wrenching decision must be made at the end of the game – and it’s one that echoes the notion that though State of Mind deals with massively complex transhumanism themes and concepts, the stakes are rarely higher than that of the single individual, or certainly, the love and companionship one feels from those who are closest to us.

Though State of Mind clearly owes a debt to the likes of Blade Runner, Ghost in the Shell and to a lesser extent, The Matrix, so too can the inspirational yoke of the classics be felt also. The Kurtz recreation centre that features heavily in the game’s City 5 location for example, is a reference to Colonel Kurtz from the movie Apocalypse Now, which in turn was an adaptation of Joseph Conrad’s Heart of Darkness – with both being works that have a strong focus on transcendence and dissociative psychosis.

In short, State of Mind actually feels like the first real adventure title that we’ve had in a long time that doesn’t use violent or cuss-filled spectacle to fake its way into earning the ‘mature’ badge. Moreover, it’s simply refreshing to see a games developer treat these deep and sophisticated topics with the sort of well considered nuance and consideration that they have long deserved.

Slow Pace And Light Challenge Is The Name Of The Game

When you get down to nitty gritty of State of Mind, it plays out very much like a regular narrative adventure, albeit one that is extremely slowly paced and which presents little challenge to stymie the player. In reference to the former criticism, which in fairness depending on your tastes might not even stand as one, it’s fair to say that State of Mind is a slow burning affair to say the least.

You’ll spend much of your time leisurely walking around the game’s ornate environments speaking to characters to develop the story, picking up objects and clues, and piloting the occasional drone around in what amounts to a fairly tedious minigame. Those expecting Detroit levels of violence and QTE-fuelled spectacle will find themselves disappointed – State of Mind is predicated around a subdued and meditative approach to its narrative that is manifested in dialogue heavy encounters, rather than the eye-searing explosions and well choreographed fight scenes of a glitzy Hollywood blockbuster.

Likewise, the level of challenge that players will encounter in State of Mind is hardly prohibitive. Puzzles, such as they are, are immensely straightforward affairs and hardly require either previous genre experience or a sky-high IQ to solve, lending credence to the fact that State of Decay is more concerned with players completing the narrative journey more than anything else.

Freshening things up a touch however is the character swap system that sits at the crux of State of Mind. Though the gravelly voiced Richard Nolan lives in the seemingly permagrim Berlin, there is another playable character that the players will spend a lot of time with too. Adam Newman, who lives in the almost sickeningly idyllic City 5, finds himself drawn into Richard’s ever evolving odyssey as players progress through the story.

Often switching between the two, with other characters becoming available later on, State of Mind has players advancing the story with one character before needing to switch to another one in order to continue. More than just a distraction from its lacking challenge however, the change from one character to the next serves to do further justice to State of Mind’s labyrinthine plot, which perhaps if told from a singluar perspective might had otherwise ended up breaking under the crushing weight of its substantial storytelling ambitions.

A big component of what makes Daedalic’s vision of the future so compelling is the excellent audiovisual presentation that is threaded through every minute of State of Mind’s 10-12 hour long duration.

Certainly when it comes to the visual side of things State of Mind is striking to say the least – pairing up low polygon, flat-shaded character models with higher detailed environments is not only an inspired stylistic choice, but one that could be argued reflects the way the protagonist sees the world and everybody else that exists within it.

Of particular note and deftly complimenting the attractive visuals is the high quality voice over work that State of Mind encompasses. Headlined by a superb performance from Doug ‘Geralt of Rivera’ Cockle as the gravelly and temperamental Richard Nolan, the whole cast of State of Mind put in a stellar turn and all of them ooze believability as individuals trapped within worlds, bodies and situations that they either don’t understand or are struggling to come to terms with. This is top stuff.

State of Mind Is An Imperfect But Ultimately Compelling Mature Story

Between the neon soaked puddles that frequently blot its Blade Runner esque futurescape and the relentless hum of its cyberpunk urban bustle , State of Mind not just looks the part, it is the part. Though the game might lack challenge, stirring action and a breadth of non-linear branching experiences, the fact remains that it does that rarest things – it treats you like an intelligent and educated adult.

Though its action-free, slow burning and dialogue heavy nature ostensibly means it won’t be for everybody, State of Mind nonetheless carves out a niche as a thoughtful and commendable meditation on transhumanism and existential themes that no other game on PS4 is doing right now.

And for that, if only that, it deserves your undivided attention.

State of Mind is a commendably well-presented, if challenge-light effort that dives head first into its deep and winding subject matter with nary a look over its polygonal shoulder. A mature adventure then that proves itself worthy of the descriptor.