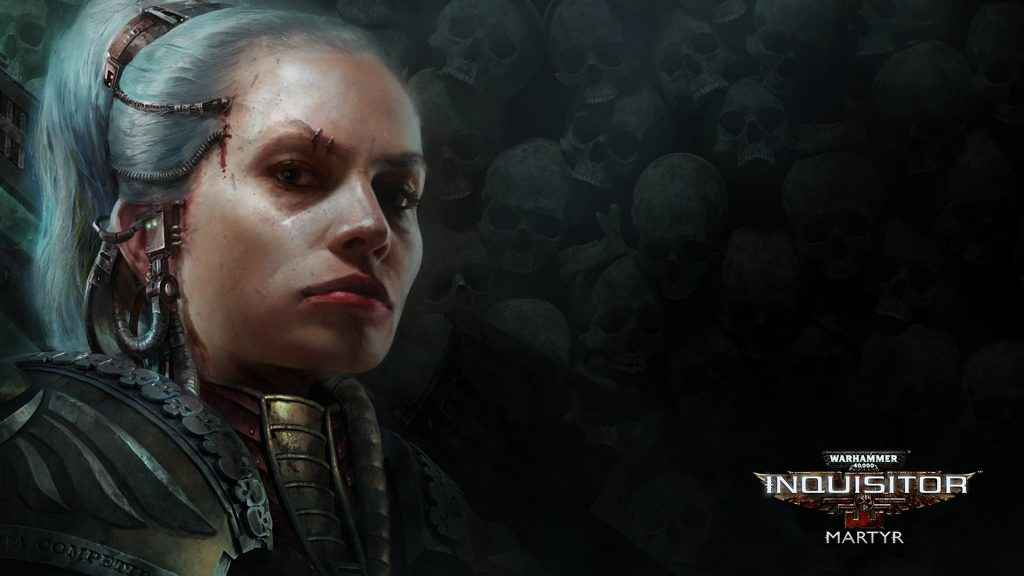 The universe of Warhammer 40,000, where all is bleak, crap and violence is basically the solution to everything, is arguably an ideal setting for a top-down dungeon crawler in the Diablo template. So it is then that Neocore Games, the developers behind the underrated Van Helsing dungeon crawlers, have fashioned just that with Warhammer 40,000: Inquisitor – Martyr.

Set in the depths of the Chaos riddled Caligari Sector during the 41st Millennium, Martyr (I’m seriously not re-writing out that gobstopper of a title every time), casts players as a super-hard, super-trained and super-violent Inquisitor who has been dispatched to investigate the appearance of a mysterious fortress-monastery that has manifested itself from deepest, darkest space. Think Space Columbo if he was nearly seven foot tall and made of hammers and guns.

In short, this is just one big whopping excuse to get stuck into some Warhammer 40,000 flavored ARPG action, and Martyr certainly doesn’t disappoint at its core. Able to choose from one of three very different classes – Crusader, Psyker and Assassin with multiple skill trees contained within each, Martyr provides no shortage of ways to accommodate a range of player styles. Want to carve through those Chaos idiots with a sword – you can do that. Fancy opening fire with heavy weapons and deploying turrets to aid in your carnage of these unspeakables? You can do that too. Choice is good.

Whichever class you settle on, combat in Martyr feels pretty great. Whether it’s the squishy, palpable slice of blades passing through the bodies of your enemies, the rhythmic pounding of high-grade ordnance being blasted into a horde of Chaos lads, or an orbital strike devastating a conclave of baddies, Neocore Games have really nailed how satisfying combat can be in the grim future of the 41st Millennium. Aside from just feeling great, combat in Martyr has also been thoughtfully engineered too. When killing enemies for example, there is no need for you to cycle between their remaining number, as Martyr will automatically switch to the closest target after a kill. Likewise, a neat cover system allows players to nip behind obstacles to shield themselves from enemy fire, and if they have ranged abilities themselves, return fire with violent aplomb, while a rechargeable syringe can be used to top up your health should you ever get low.

More than just brainless grunts (though there are plenty of those around), some of the stronger enemies that you’ll bump into will be tricky to kill – otherwise using cover to their advantage, summoning turrets or command other mobs to flank you. Indeed, though Martyr is fully playable in solo, it does help to have additional players around to help even the odds when you arrive at these more challenging foes.

Where Martyr stumbles a little in this regard is in how it enforces equipment management – rather than allowing players to equip the new gear that they find on the battlefield, Martyr only enables folks to equip their new shiny loot once the mission has been completed and not before. An odd deviation from the norm certainly and no mistake.

Boasting much more than just a sprawling single-player campaign, Martyr is absolutely stuffed with side missions and other activities. The first of these which you’ll notice early on are the investigations. Of course while the primary vocation of the Inquisitor is that of a detective, it can be all too easy to forget this when you’re pretty much constantly knee-deep in Chaos innards.

Though simple (all you have to do is interact with highlighted computer terminals and other such areas), collecting clues allows you to work towards solving an investigation which in turn provides a substantial reward. Although not especially sophisticated, these investigations nonetheless satisfy by providing a nice distraction from the relentless slaughter, all the while providing a nice bit of lore at the same time.

Complimenting the main campaign are a range of constantly changing side missions. With their difficultly grading measured against your equipment power level (think Destiny’s light level system and you’re basically there), these missions offer a neat way to gain additional experience and gear, though the objectives in each remain broadly similar – kill everything that moves (this is a Warhammer 40K dungeon crawler after all).

Beyond Martyr’s extensive and ever-changing swathe of side missions, Neocore Games have also implemented a substantial amount of endgame content. Warzones – a narratively driven set of missions where players must battle hugely powerful foes for the best loot is accompanied by Cabals; special player clans that can be granted unique missions and progression that you cannot get anywhere else. Elsewhere, an upgradeable forge allows players to use collected materials to fashion new and better gear, providing yet further incentive for players to immerse themselves in Martyr’s almost bottomless amount of mission based content.

It’s clear also that Neocore Games ambitions lay far beyond the present, as the developer has confirmed that future free content for Martyr will be both frequent and substantial. New missions, new investigations, new global events and much more besides are all promised in what looks to be an ambitious content roadmap for Martyr all of which ensures that players won’t find themselves getting bored anytime soon.

Then of course, there is the prospect of co-op play. Like any ARPG worth its salt, Martyr is ostensibly best played with friends and indeed, having a fellow Inquisitor or two along certainly makes the endgame content more enjoyable (and achievable) than it might otherwise be. The only caveat to this however, is that you have to play through the first five tutorial style missions alone before the option to take part in online or local co-op shenanigans becomes available.

As much as Martyr provides a monstrous amount of content for players to get stuck into, so too does it absolutely look the part. Whisking players away from the usual grim interiors of ruinous space hulks, Martyr takes players on an Chaos destroying odyssey to snow blanketed planets, desolate wastelands, far-flung star fortresses and everything in-between, perfectly capturing the wide variety of locations that the Warhammer 40,000 setting has long encompassed.

So too do the character models pay complete and effective homage to the source material too, with the Inquisitors, forces of Chaos and all the other denizens of Martyr’s Caligari Sector looking like they’ve leapt off the board and onto your screen. In short, Martyr nails the Warhammer 40,000 aesthetic perfectly.

Unfortunately tarnishing both the aesthetic and the Martyr experience at large are the array of visual technical issues that blight the game. Tested extensively on a PS4 Pro, Martyr offers two different visual settings – Balanced, which renders at 1080p with an increased framerate, and Quality, which renders the game at 1440p with a lower framerate.

The problem is, it doesn’t matter which setting you choose as the framerate is poor in both modes (frequently dropping below 30fps in busier battles) and huge amounts of distracting screen tear is present throughout. On a standard PS4, the issue of polish is hardly improved as one again a low framerate and copious amounts of screen tearing act to the detriment of what is otherwise a hugely fun dungeon crawler.

A muscular and content rich ARPG foray into the Warhammer 40,000 universe, Martyr is a solid and highly enjoyable dungeon crawler that fans of the source material really shouldn’t ignore. All the same, Martyr’s technical maladies do threaten to drag down the experience and we hope that these are fixed as soon as possible because the game deserves better. And so do you.

Warhammer 40,000: Inquisitor – Martyr from Neocore Games is available on PS4, Xbox One and PC.

An engagingly substantial take on the Warhammer 40,000 franchise, Martyr's litany of technical issues tarnish what should otherwise have been one of the better titles from developer Neocore Games. All the same, Warhammer 40,000: Inquisitor - Martyr will provide many hours of chaos blasting fun for fans of the franchise.