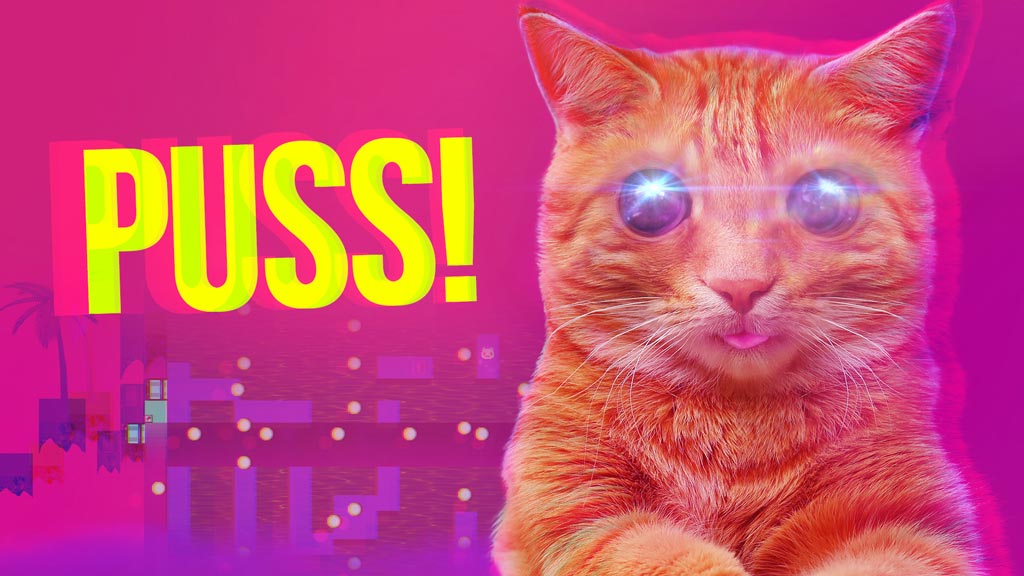 PUSS! Review PS4 Psychedelic video games are rare beasts. Back in the 8-bit era, Llamasoft pioneered weird on the Commodore 64 with a succession of trippy reworkings of classic arcade games, usually featuring ruminants (sheep, llamas, camels), such as Mama Llama, Sheep in Space and Attack of the Mutant Camels. Since then, the ‘strange baton’ has been passed onto and championed by Japanese developers with deliriously odd games such as Rez, Katamari Damancy and LSD: Dream Emulator.

Joining the wigged out fray, comes PUSS! from teamCOIL, a game so blisteringly strange, you’ll feel like you’ve ingested a hash gateau while you were on the way back to the early 80s in a time machine made of cats taped together. But do the 8-bit psychedelics wrap up a delicious maze puzzler or do they merely hide a soiled pair of Jeff Minter‘s smalls?

After the intro sequence featuring a cat leaping into a TV screen and some gloriously baffling lo-fi imagery featuring rotating dolphins and cats, PUSS! places you in control of a cat sprite with a simple goal of crossing a 2D maze within the confines of the screen to reach the exit. Brushing the walls causes your cat to digitally fuzz up and take damage and too many collisions results in a restart from the beginning again. The only control needed is the left stick to guide your cat, and as there’s no inertia, it’s a simple matter of being accurate with your timing. 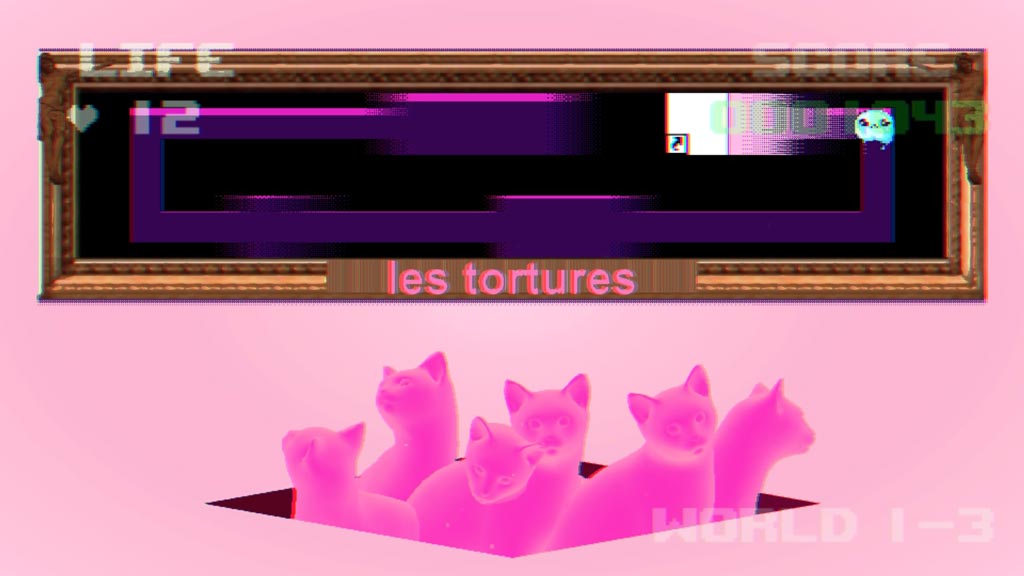 As you progress through each ‘world’ of ten randomly chosen levels, the mazes increase in complexity and severity, with switches, searchlights, moving blocks and blobs to avoid. Clean and fast completion rewards you with extra points when you reach the exit, and extra lives are plentiful and highly necessary, as you’ll be losing them at an alarming rate.

Persistence is rewarded, but more often than not, you’ll be swearing like a trooper as you repeatedly die on a particularly fiendish section of the maze. You can handily adjust the sensitivity of the left stick which helps you to navigate the tighter time sensitive maze sections but it basically just adds a millisecond of delay before you start moving. You’re still left with a binary control system which harks back to when videogames hadn’t developed any nuances. Checkpoints are introduced on the trickier mazes and later on, a ‘get out of jail’ card (in exchange for a life) is provided by the God Cat if you just can’t make it through.

Once you’ve conquered the frustratingly tough first world Cerberus boss level complete with some hilariously frenzied claw scratching button mashing, you then have the choice of five worlds to attempt. Dipping into any of these worlds reveals a ramped-up difficulty level bordering on sadistic, and while the later levels are hugely inventive, they require a finely honed intricacy to solving them and a whole cattery full of patience and I can see many players throwing in the towel before completing much more of the game. 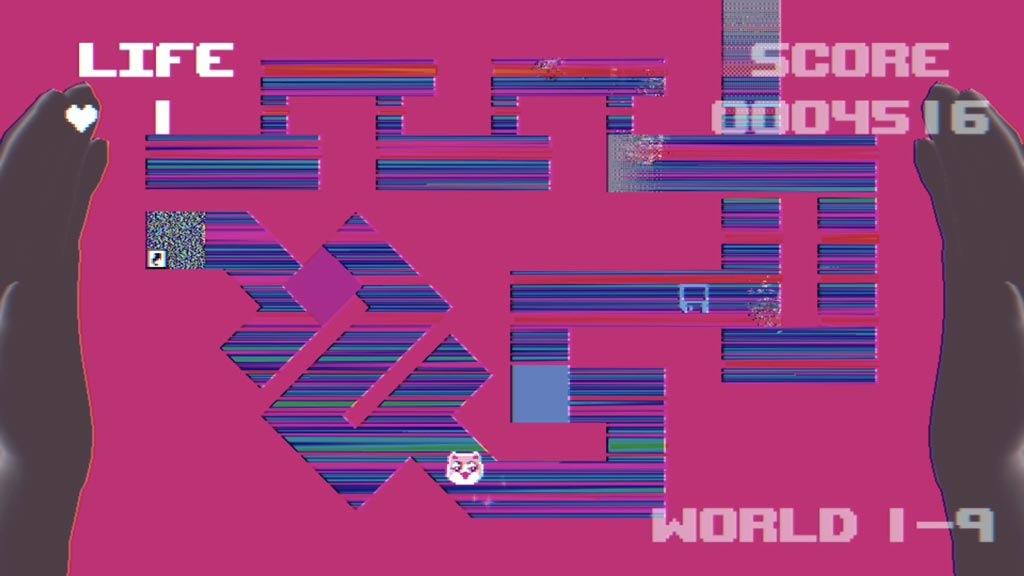 Half-Speed Conversations With Your GP

Throughout every level, the gaudy luminescent walls and backgrounds pulsate in a nightmarish fashion along with a perfectly judged monged-out soundtrack, reminiscent of Chris Morris’ pitch-black comedy series Jam. The visual veneer has an 8-bit cataract blur which makes you want to reach for a thick pair of glasses and I found this to be a particularly refreshing and bold choice, swimming against the expectations of a commercial videogame title.

Developers teamCOIL have managed to create a unique psychedelic aesthetic akin to a strange 8-bit dream, complete with digital interference glitches jolting in and out and some truly funny and wantonly bizarre imagery. While this all combines to make some highly arresting and original presentation, it’s unfortunate that the gameplay within is so basic and repetitive. In conjunction with a crippling difficulty curve, it ends up feeling like a mini game which goes on for far too long. 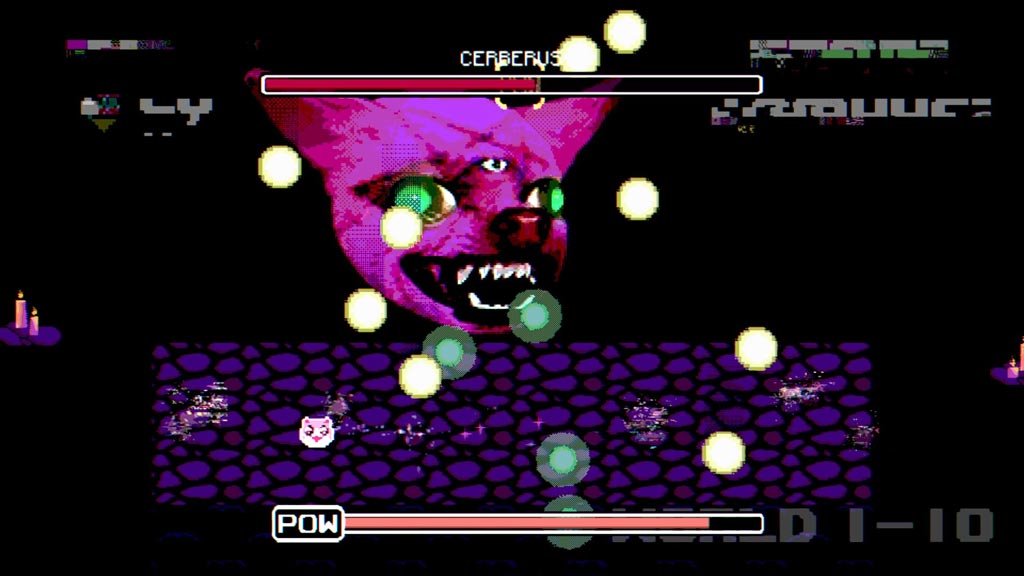 The absence of a competitive two player option is a shame, as racing to the finish across the mazes would have added a bit more depth and a whole heap of playing time. You’d still be left with a game that would almost be at home on an Atari 2600 if you stripped away the crazy veneer, and it’s a bit of a shame that teamCOIL didn’t spend as much time on the gameplay in this regard as they did on the presentation.

Nevertheless in short bursts, it’s strangely compelling and if you have the patience, give it a go and drink up the freaky pixelated visuals and disturbed soundtrack as you shout expletives at the TV while you fumble for your corrective lenses.

Utterly brilliant lo-fi psychedelics fail to make up for the simplistic and repetitive gameplay which very quickly becomes too difficult and frustrating to hold most players' attention. It's worth dipping into for some wigged out hilarity though, for as you long as you can hold off throwing the controller at the screen...