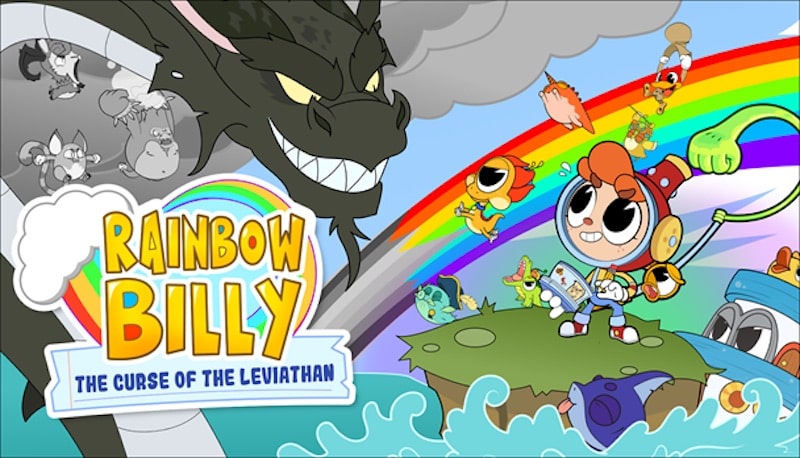 Rainbow Billy: The Curse of the Leviathan PS4 Review – Developed by ManaVoid Entertainment, Rainbow Billy strikes out the moment you gaze your eyes upon it. Featuring a unique art style that mimics animated cartoons such as Adventure Time, Rainbow Billy tugged my heart strings with its presentation, charm, and, quite honestly, joy.

It’s been a while since I played a game that just put a smile on my face for the entire experience.

Rainbow Billy: The Curse Of The Leviathan Review (PS4)

A Story Of Finding Friendship And Happiness

Rainbow Billy tells the story of Billy, a young boy living in a happy land of positivity as he and his friends celebrate their happiness with fireworks. As the party begins, the Leviathan awakens from its deep slumber due to all the light and joy and decides to spread sadness and depression, robbing the vibrant world of its color.

Billy escapes on his friend, a boat named Friend-Ship. Billy then takes on the quest to return color to the world, save various creatures while befriending them, and restore happiness to the world. 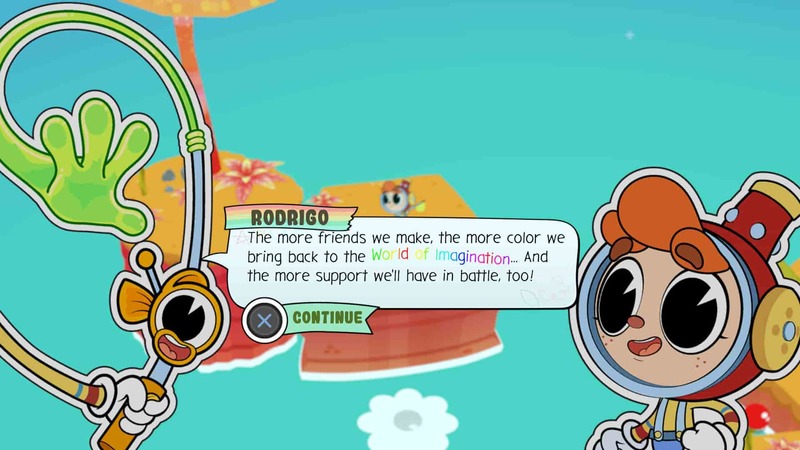 Billy travels to various islands across three different lands, searching for Color Cores to defeat the Leviathan. Billy must collect three of these cores, and the Leviathans generals are protecting them. Each island is a small area to explore, which features various platforming and puzzles to solve.

Some islands have creatures located on them, and Billy must return color to their life which in turn restores color and energy to the islands.

Enjoyable Puzzles And Simple Exploration Is For Everyone

The puzzles in the game are pretty simple, and most of them correspond to the platforming. Activating a switch to pop open bouncy plants to jump across, to building snowballs to a specific size by kicking it through various patches of snow to be able to jump on top of and gaps to cross, are just some of the examples on offer.

None of the puzzles are hard, but they do require a smidgen of critical thinking to solve. On the other hand, platforming can sometimes be tricky because it’s hard to determine where Billy is about to land, due to the game’s 2.5D camera.

I didn’t have too many problems with it, but there were times where I would miss a jump and have to make my way back up a mountain or cliff. Each island also features some secrets, the most important of which are friendship items and Feelings. 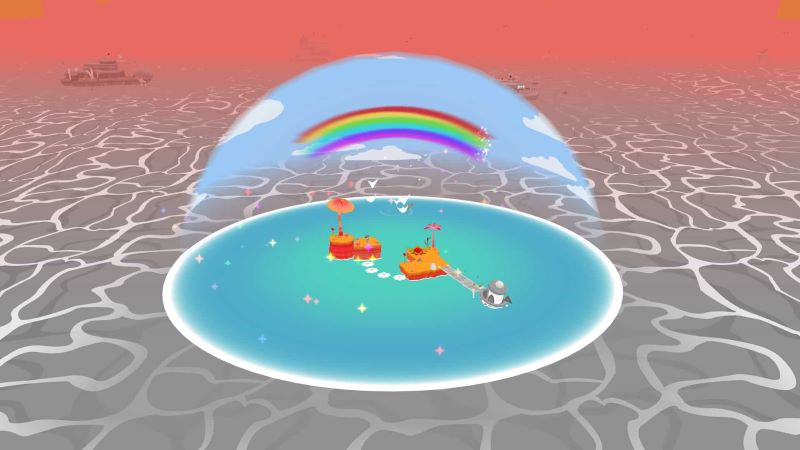 Feelings are tiny creatures that look like Bats that Billy collects and feeds them to a machine that cleanses the negative feelings for positive ones. As you manage to cleanse enough of these feelings, you’ll be rewarded with extra filters for your camera to take photos with, and more importantly, extra moves to use during combat.

When you encounter creatures, you enter a turn-based system where you must return the creature’s color and make them feel better. The game, at its core, feels like an introduction to Psychology. Battles come down to three fundamental factors, the first of which finding out what each creature suffers from. These range from depression, self-esteem issues, and bullying.

Each creature gives you hints about what’s bothering them, and Billy must talk to them to make them feel better. You must select one of three conversation options that relate to what’s causing the creature’s anguish. If you choose the correct option, the creature will open up to you and unlock one of its weakness bubbles.

This leads to the second phase of combat. Billy is armed with tokens representing the various creatures he’s helped and those who have joined him on his quest. Each creature token has three different symbols that you can choose to attack with. To help your opponent, you must use the tokens that match the symbols that appear over your opponents. 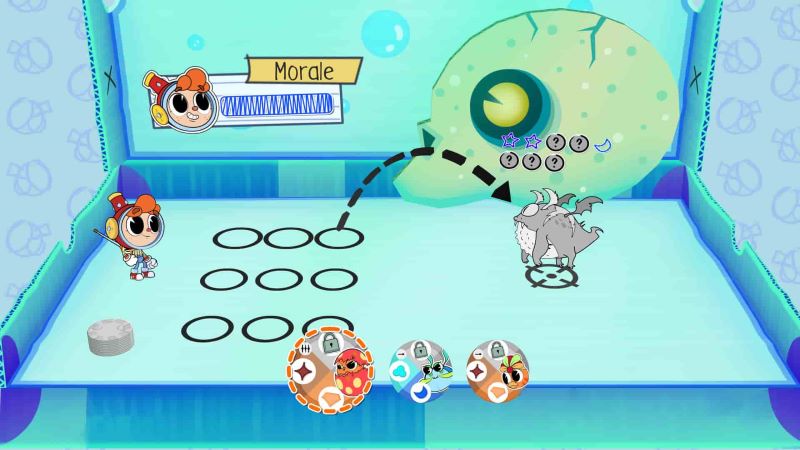 These symbols are locked at first, but every time you make a correct conclusion during the talking phase, these symbols will reveal themselves. This allows you to use the corresponding tokens to match their weakness.

Once you place down your tokens, you go into the attacking phase. This phase acts as multiple mini-games. Each creature token provides various mini-games that you must complete to land a successful attack. These mini-games range from hitting the correct button as it reaches its destination, much like PaRapper The Rapper.

Examples include a game of single-player Pong, where you must stop a ball from getting past you as it bounces off walls, to a simple slot machine, where you have to stop the spinner on the correct object are just a few examples.

A Charming Art Style Is Like Playing A Saturday Morning Cartoon

As much as I enjoyed these mini-games, they do become repetitive. They aren’t challenging at first, and battles go by fairly quickly, but in the latter stages of the game, the actions begin to drag out when you go through too many mini-games and you’re forced to switch out your tokens because they don’t provide the correct symbols you’re looking for.

Another issue arises when you must match almost fifteen symbols over your opponents, as it begins to drag the battles out.

Once you defeat a creature, you restore their color and positivity, and they end up joining Billy on Friend-Ship, where Billy can interact with them. As you interact with your new friends, they’ll request various objects that help them with their problems.

You find these gifts throughout the world, and they aren’t tough to find, but locating the ones you need is random. When you present these gifts, it raises your friendship level, and once that level increases, they unlock the second shape on their token, allowing you to use one of three different shapes per token. 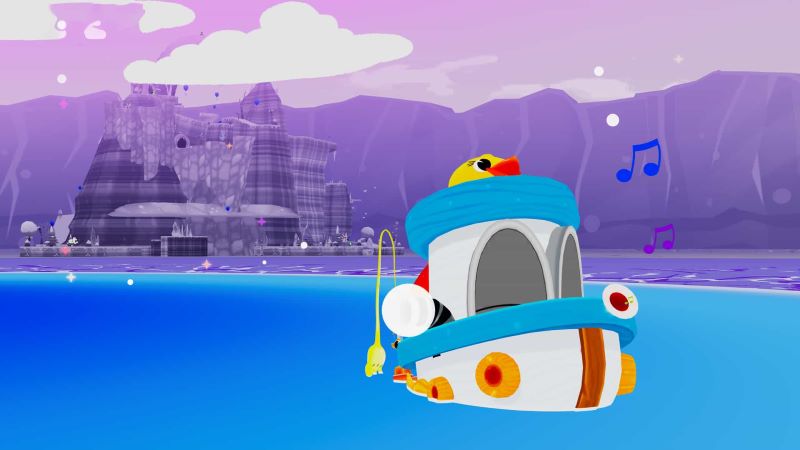 Rainbow Billy’s art is just a joy. The feeling that I’m playing through a Saturday morning cartoon is a calming experience. The various use of colors and simple animations go a long way in making the world as believable to its design as it can be. The music is also a great contributor in immersing you into Rainbow Billy’s world, constantly changing its tone depending on the colorful or darkened world Billy finds himself in.

My time with Rainbow Billy: The Curse of the Leviathon was fairly joyous. Despite somewhat feeling like a psychiatrist treating patient after patient, the developers did a great job in depicting the real-life problems that people deal with every day, and how just the right words can make someone’s day or break it.

Though I felt the game became a little repetitive, I enjoyed the exploration and puzzle-solving. The game’s combat is innovative but playing through the same mini-games repeatedly gets tiresome before you even reach the halfway point.

Rainbow Billy: The Curse of the Leviathan is now available on PS4 and PS5 via backwards compatibility.

There aren't many games that can carry charm and charisma on its back throughout its entire duration, but Rainbow Billy: The Curse of the Leviathan managed to keep my interest from start to finish. Its charm is undeniable, and developer ManaVoid Entertainment managed to create an experience that held a smile on my face from start to finish. The game can get repetitive quickly, but the delightful exploration and innovative combat kept me intrigued long enough to see the credits roll.

Rainbow Billy: The Curse Of The Leviathan