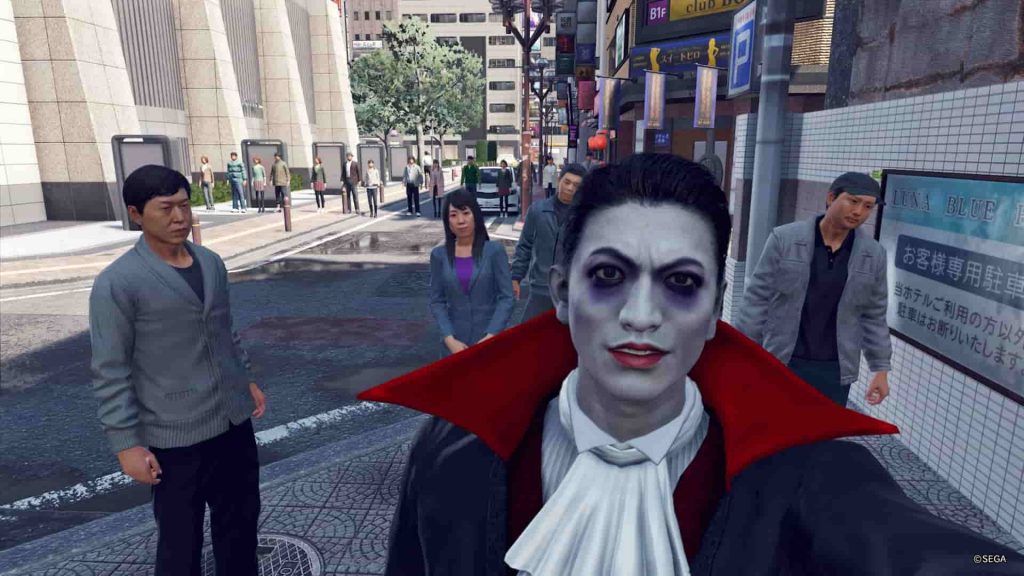 With Judgment, the next effort from long time Yakuza developer Ryu ga Gotoku Studio, the Tokyo based outfit has accomplished that rarest of feats – it has managed to fashion a franchise spin-off that not only lovingly adheres to the core template, but also one which offers something new for both stalwarts and series newbies too. Arguably, Judgment’s dual identity is nowhere better expressed than in its main protagonist, Takayuki Yagami, a street smart former lawyer turned detective who often lets his mouth and get the better of him and who, on occasion, doesn’t mind cosplaying as a celebrity vampire when the mood takes him.

The story too is different enough, but not too different, from the tales of Yakuza games of the past. Three years after being disgraced from his profession as a lawyer after a killer he lets go free reoffends, a serial killer is now plaguing Kamurocho – stabbing out the eyes of its victims all the while the involvement of multiple Yakuza families and even government agencies are rumoured. In truth, it marks a stimulating change from the mafiaoso narratives that have characterised previous games. Sure, those plotlines exist in Judgment, but they do so in service of the larger picture, rather than being the larger picture.

Yagami then, is a much more free spirit when compared to Yakuza series protagonist Kazuma Kiryu. A world away from the stuffy stoicism of Yakuza’s leading gent, Yagami feels much closer to an everyman than any other entry of Toshiro Nagoshi’s series has managed to come up with to date. Indeed, rather than rocking around super elite, high-flying folk as Kiryu used to, Yagami instead finds himself liaising with disgraced Yakuza, junior office assistants and awkwardly introverted lawyers. It also doesn’t hurt that Yagami is resolutely tech-savvy too – another sign that he is a new hero for a different time and a world away from the old-school mentality of Kiryu.

As a result of his more outgoing and personable nature nature, Yagami eschews the lone wolf image that Yakuza’s main protagonists normally exude by having quite the support system of friends and work colleagues in place. From his friends and colleagues at the Genda Law Office that he contracts for, to old flame Maafyu and even the kind-hearted land lady that allows him to constantly default on his rent payments, it’s refreshing to play as a protagonist that actually needs other people to properly function, rather than seemingly existing in a dependency vacuum. He’s an imperfect and often troubled individual and that makes him all the more compelling as a result.

The differences between Kiryu and Yagami don’t end there either, as physically, the two protagonists are very different and this manifests itself in a number of tangible ways. Less a walking wall of muscle-bricks and more of a wiry, nippy sort, Yagami right away has a near bottomless gas tank that lets him sprint around the city without running out of breath (something that Kiryu has real trouble with until you massively upgrade him).

When it comes to combat, the two couldn’t be more different here either. Whereas Kiryu’s style of fighting always felt like a series of brutal blows linked into a jerky combination, Yagami is all about the flow from stance to movement to attack and back again – effecting a much more balletic spectacle than the smash-mouth street fighting that has long been a trademark of the Dragon of Dojima.

Coming across as a hybrid of Chinese martial arts superstar Jet Li and Tekken’s resident flashy capoeira specialist Eddy Gordo, putting foot to face is Judgment is rarely anything less than an intoxicating experience. Yagami’s superior agility proves to a boon during fights too, as he can jump off and run along ways, mount cars and much more as he unleashes a range of new attacks that are completely new to the series.

Though Yagami’s reliance on kata and sophisticated form and poise make his moves feel more telegraphed and a touch slower than the spontaneous violence of Kazuma Kiryu, he boasts two fighting styles based on Chinese Kung-Fu; Crane and Tiger, and is able to freely switch between the two mid-combat. The former is good against large groups while the latter works better against a single foe and Judgment frequently tests the player’s mastery of both forms with some thunderously exhilarating and challenging scraps.

Like Kiryu before him, Yagami can make ample and devastating use of numerous objects and weapons in the environment to destroy his foes, but unlike Yakuza’s frontman he can’t carry a weapons arsenal around with him on the casual that’s destructive enough to murder a small country; instead placing an emphasis on violent innovation. Elsewhere, Yagami can also employ Ex Moves (basically the series Heat Moves but under a new name) to inflict brutal, bone-breaking attacks on his enemies assuming he has the necessary Ex bar to do them, and boy, are they worth it, as Yagami busts out some of the most downright violent attacks the series has seen.

Not quite superhuman specimen that Kiryu is, Yagami is susceptible to mortal wounds from elite enemies that shoot, stab or bludgeon him with deadly attacks. Grave injuries indeed, these cannot be healed by eating or using recovery items, requiring Yagami to either visit a doctor or use a medical kit, and make some of the later fights feel deeply perilous in a way that they just haven’t done in the past. The challenge of Judgment’s fights is further magnified by the fact that there are no longer any drug stores in Kamurocho – so you can’t just load up on Staminan Royale and just tough your way through every fight.

Progression-wise, Judgment sticks much closer to the series mould – providing three different categories, Ability, Battle and Special for our hero to put SP into, with each category offering improvements to health, damage, new moves and wider game activities, too. Ah yes, activities. This being a Yakuza game in all but name, Judgment is absolutely rammed to the hilt with the things.

Arcade games return once more and are well represented by the likes of Puyo Puyo, Virtua Fighter 5 Showdown and Fighting Vipers, while Kamuro of the Dead, a light-gun take on Yakuza Dead Souls rounds off things quite nicely. As you might well expect there is a whole bunch of stuff to do outside the arcade, too. Usual Yakuza hobbies such as darts, baseball, poker, mahjong and more all rear their heads, and are complimented by new past times such as drone racing, pinball and VR minigames.

However, other traditional series activities such as Karaoke are missing and unlike previous games there are no money generating side jobs, such as managing a cabaret or real estate to bring in the big bucks. Without those big activities, Yagami doesn’t have much money early on – certainly far less than the funds of a seasoned Yakuza such as Kazuma Kiyru; a fact that makes sense given his social standing. As a result, this makes saving up for some of the more expensive purchases more challenging than before.

As a detective, Yagami finds himself engaging in all manner of different activities as he pursues the completion of cases and smaller side-cases (more on those in a little bit). When chasing suspects, the QTE-tastic chase sequences return from the earlier Yakuza games, but feel improved on account of Yagami’s natural athleticism as he leaps up and over obstacles, people and even uses skateboards in a way that would make Marty McFly blush.

Supplementing the detective side of things further are visual novel style investigation scenes where you must comb the environment for clues and branching dialogues – a first for the series, and hopefully a mechanic that will persist into the Yakuza series proper. And this is the thing, as much as Judgment feels like a Yakuza game, it also feels different, pleasingly different, thanks to Yagami and his sleuthing shenanigans.

Kamurocho was always a character unto itself in the Yakuza games and so it’s hardly surprising that it remains the case in Judgment. Taking place after the events chronicled in Yakuza 6, Kamurocho has always seemed like it could support a cracking noir narrative. Well, Judgment is that game. With its dimly lit bars, seedy dealings and constant reflection on how the city chews up and spits out in its inhabitants as people scrape and claw toward their dreams, Judgment strikes an overall much different atompshere from the mainline Yakuza games.

The city actually reacts to you in new ways now, too. For example, I had a fight outside a shop and then went in to buy some cigarettes but was refused service because of the ruckus that had occurred shortly beforehand. The city speaks to you now too – assuming you’ve got the smokes, smoking areas allow Yagami to eavesdrop on the locals and gain some valuable backstory into the history and current events of Kamurocho, providing yet feather to the cap of Judgment’s already stellar world building.

When it comes to tone, Judgment carries on the series grand tradition of expertly switching between the absurd and the serious at the drop of a hat. As is the case with the Yakuza series itself, the best examples of how Judgment straddles the tonal divide can be found in its side quests, or side cases as they’re known here, and what a mad bunch they are too. From cosplaying as a vampire to stopping a pervert ring, aiding a fortune-teller and getting the bottom of the mystery concerning a visit from a particular Hiroshima mascot, Judgment is often nothing less than raucously entertaining and frequently hilarious.

Speaking of the side cases, their availability is handled a little differently this time around. A new reputation system lets you collect free items from various individuals once you’ve become friendly with them by doing odd jobs. The more friends you have, the more side cases become available – as opposed to the previous Yakuza games where side missions are literally wherever you find them.

Some additions to the formula just feel unnecessary though. Like having to choose the correct key to match a door lock. I get that it is supposed to elicit tension, but it ultimately just feels superfluous and tedious. Oh, and there is not one, not two but three mini games for dealing with locks. Three. And I have no idea why. Likewise, it’s a touch annoying that the consumption of food and drink has ditched the hunger meter and simply returned to the system of old – whereby you can’t eat if your health meter is full, and doing so only provides SP (experience points) the first time you consume each dish anyway.

In case you’re wondering the English language dub is actually really good too. Not since the very first Yakuza title released on PS2 in the west in 2006 has the series enjoyed a dub – and this one is *much* better (though Mark Hamill’s turn as Majima in that PS2 classic remains a standout), with a variety of decent and over-the-top performances to seal the deal.

Judgment then, is a grandly entertaining spin-off to Sega’s mainline Yakuza franchise. Though perhaps not quite as different as some may have liked, the game nonetheless soars on its own merits – combining a completely fresh and engaging protagonist with a refreshing scenario to give series fans one of the most thoroughly satisfying action adventure offerings of the year.

A sizeably riotous spin-off to Sega's Yakuza franchise, Judgment combines the series penchant for balancing seriousness and absurdity with a hyper-engaging central protagonist whose deeply charismatic persona freshens the whole affair up massively. Judgment is a toweringly good offering then, and one that we hope leads to its own series with leading man Yagami at the forefront.