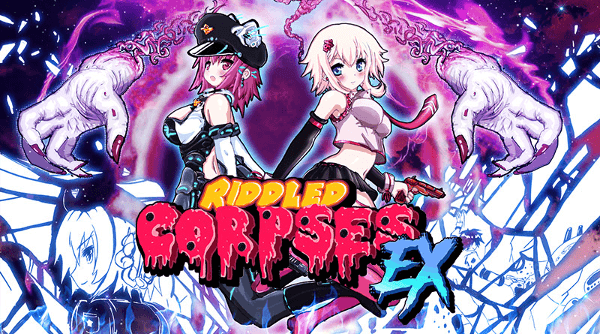 What makes Riddled Corpses EX special is something that still kind of eludes me. On paper, it's a standard 8-bit twin-stick shooter, and only features a few game modes: story, survival, and arcade. The narrative is rather simple, since the focus is gameplay, and you have only a few characters to choose from. What does it, though, is that the learning curve is incredibly steep all while having the gameplay itself immediately accessible.

You have access to six different characters, each with different abilities, attack speeds, and damage levels. From there, you fight your way through six stages of demons, zombies, and crazy creatures. Death is inevitable. It will come swiftly and often. In order to progress, you will have to grind a great deal for gold so you can upgrade your characters with stronger attacks and a few accessories. In part, the difficulty of Riddled Corpses comes from the sheer number of enemies on-screen during invasion. For example, in the first stage alone, I had to grind out gold just so I could do enough damage to contend with enemy numbers without being overrun.

It's in this that I have my greatest dilemma with Riddled Corpses. In order to beat the game, I've played nearly fifteen hours, and of that time, a good twelve hours have been dedicated to farming gold for maxing out the characters and accessories needed to beat the final zones. I've learned a lot in that time about the intricacies of the game, but a few things stand out from that knowledge. The first is that, despite my frustrations, I still wish to play it. Riddled Corpses has a hearty challenge that's behind a grind wall, but my want to surpass that challenge kept me going past all the frustrations and grinding.

The second thing is simply the HUD itself. Usable items sit in the top left of the screen, which cover up a significant section of the map. You can see where this can become a problem. There is an option to make them transparent, but they only become transparent when your character moves up there. Then there's the combo indicators. For each enemy killed while chaining combos, a counter appears over them. Later in the game, the screen can get filled with these, and the problem comes from them covering up not only enemies but projectiles.

The third thing is that enemy spawning is inconsistent. The problem is not that enemies spawn at random in random locations. It's that they can fire projectiles the moment they spawn. What kills me about this, both literally and figuratively, is that when an enemy spawn right next to you and fires immediately, there's no chance to react to it. I understand that there's challenge in this, but in having to contend with a filled screen of enemies gives you less than a chance to react to that kind of spawning. This results often is lost lives and game over screens. It feels cheap, and it's beyond frustrating.

The payoff to how enemies spawn is the fourth thing. Coffins appear, and for a short time they can be walked over to completely nullify the enemy appearing at all. It's a great touch, giving an extra way to contend with enemies. However, this also brings back the second point in that getting to a coffin late means that enemies will drop on you, and sometimes shoot. It's a risk-reward that can pay off. However, with all the things flying around on-screen, having consistency in areas like this would make the game feel more skill-based rather than affected by luck.

On that note, Riddled Corpses does a superb job differentiating all things from each other, giving each enemy and projectile a unique shape and color. It's in these touches where Riddled Corpses really shines. Having everything so diversified makes identifying threats that much easier on the fly. There's no misunderstanding about where you failed and where you got caught off guard.

Everything about Riddled Corpses is clear and easily understood. This, compiled with the inherent challenge, makes the game so addicting. The game has its faults, but why this game is fun is clear: Riddled Corpses is responsive, diversified in visuals, and challenging. The few mishaps in spawns, HUD blind spots, and the grind wall keep it down a bit, but there's no denying that this game has enough to keep coming back at least for a little while. This being the work of essentially one person makes it even more impressive.

Riddled Corpses EX has a strong foundation with a steep but engaging difficulty. The game is grindy, though, and has a few things keeping it from feeling polished and complete. Either way, Riddled Corpses EX has everything an addictive twin-stick shooter should have, and it does those things well.