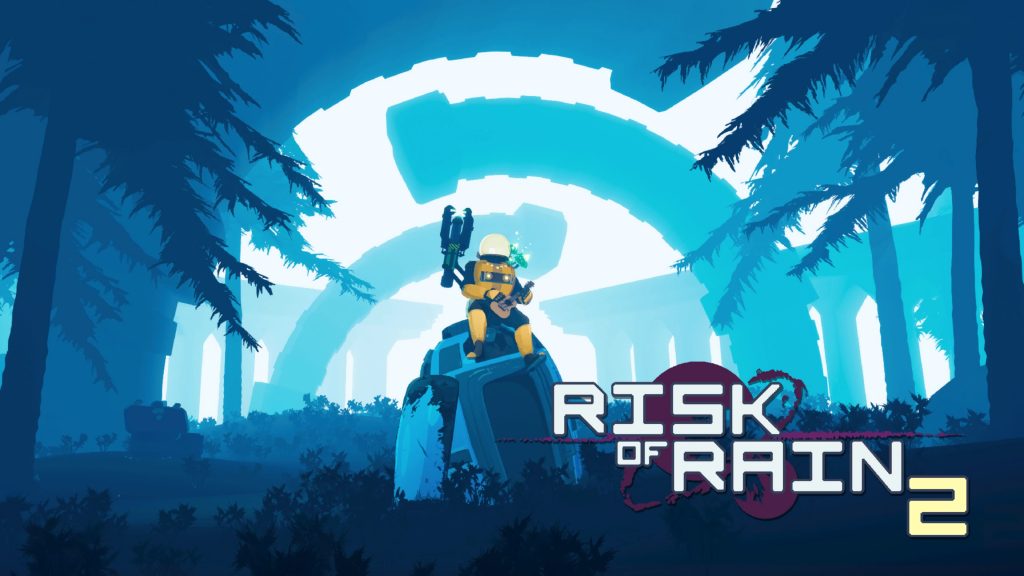 Risk of Rain came out for the PlayStation 4 back in 2016 and even though I only played it briefly I could see why so many people hold it in such high regard. Fast forward to 2019 and we have a very spontaneous drop of the highly anticipated sequel, fittingly titled, Risk of Rain 2. While the gameplay remains the same on the whole, there have been a few changes to mix things up a bit and tantalize both new and old players alike.

One thing I noticed straight away and found a little strange was the number of things in the selection screen that are ‘coming soon’. I like content updates as much as anyone but it did seem like the game was still in its very early stages. After checking Steam though it seems that Risk of Rain 2 is still in early access on PC so maybe this is the developer giving early access on console platforms a trial. Hopefully, the game will develop along with the PC version and get quick updates. I suppose it is better than waiting a year or two as long as its in a playable and stable state.

The first thing you will notice and perhaps the most striking addition to the game is the move from a 2D perspective to a 3D perspective. As you can imagine this vastly changes the gameplay and gives the whole game a more immersive feel. I am a massive fan of 2D games but I did feel that this title does benefit from having 3D environments to traverse and explore. The levels look a lot more intricate, expansive and beg to be scoured for loot and secrets.

It did take me a little while to adjust to the game, that was perhaps an amalgamation of both the small amount of time I played the previous title and the updates to the overall package I needed to adapt to. For a start, it took me ages to find the first teleporter and work out what it looked like. For anyone who has not played Risk of Rain, you need to find the teleporter to initiate the boss fight and exit the current stage. Luckily though once I had a few levels under my belt it became easier to find them and I quickly got used to the structure and layout of the game.

In Risk of Rain 2, each level is a constant battle of speed versus thoroughness. That sounds strange but the thing with Risk of Rain is the longer you spend pottering around and looting the higher the difficulty gets. You just need to find the perfect balance of powering yourself up and not make the game too hard for yourself. It was a bit difficult for a completionist like myself to retrain my mind and leave some loot behind. I got there eventually though and now can blast through stages only picking up what’s required and powering my character up accordingly. It gives the game a nice quick pace, it was different but I liked it a lot.

The actual gameplay in Risk of Rain 2 will be familiar to anyone who has played any recent roguelike. You kill enemies, gain cash and open loot containers scattered around the randomly generated stages. You also have other things like shrines, equipment pods and even turrets to repair and use. It’s your goal to kill as many enemies as possible, make your character more powerful, move to the next stage and repeat. One thing that does make this title quite different from other games in the genre though is that the pickups and upgrades stack indefinitely.

This means you get some really powerful builds if you spec correctly and pick up the right items. There is a lot of luck involved but using the equipment stores on each level and things like the 3D printers you encounter do have a little say on how your build progresses. The items you can get are very varied and have a vast amount of effects, each time you stack one it gets better and better. There were a few runs where I had 9 or so of the same item and my character was amazingly powerful.

After a few forays into single-player, I tried multiplayer and this was by far the most fun I had playing the game. The carnage, the combat, the exploration is all multiplied fourfold. The gold gets shared between all and it makes the game much quicker and a lot more interesting; upgrades come sooner and working as a team is very rewarding. Risk of Rain 2 also borrows a very good feature from games like Apex Legends, it has a ping system so you can notify other players of items in the environment like loot, enemies or the location of the teleporter.

This, of course, is a nice feature but does not stop the odd online player being greedy and stealing your loot. I would have liked some sort of protection, especially when you save your cash to open an expensive loot container and a player runs past and steals your gear. It did not happen very often and I will admit the majority of players I met online were great. We had some great games and some of my best runs were just a massive blast of projectiles and players flying around the map. I could not see what was happening towards the end of the run but it was an amazing experience and great fun to boot.

Along with the standard single-player and multiplayer modes, you have the standard daily run that you get in all roguelikes. It’s called the Prismatic Trials and pits all players against each other on the same map layout to compete for the quickest completion time. I had a couple of goes at it – you seem to get tweaks to the normal gameplay systems such as extra tasks to complete and other gameplay modifiers and it’s a different experience. It is fun to see how you match up to other players on the same maps but at the moment I enjoyed the multiplayer side much more.

Another feature I really liked was the logbook, it keeps track of all your unlocks, findings and even progress towards your challenges and therefore, your PlayStation trophies. It keeps track of your character unlocks, upgrades and everything in-between. It is nice to be able to just flick through it and see how close you are to unlocking a trophy or how close you are completing a challenge. There is a lot to see and do and its good to have somewhere to keep track of it all.

I really enjoyed my time playing Risk of Rain 2 and will stick with it far into the future. Even though I have looped around the game multiple times I still feel I have so much to see and discover. I love playing the multiplayer mode as it ups the excitement and makes the game a lot more unpredictable. The scope for build variation, play styles and the array of unlockable characters will keep you busy playing for a long time. Risk of Rain 2 performs very well and despite being an early access title is very playable and feels like a fully-fledged release. If you like roguelikes you will enjoy your time playing this enjoyable yet sometimes chaotic title. I certainly did.

Risk of Rain 2 is available on PS4, PC, Xbox One and Nintendo Switch right now.

Risk of Rain 2 is fast, fluid and a lot of fun. This is amplified vastly in multiplayer, which works flawlessly and is very enjoyable. If you enjoy roguelikes you will enjoy Risk of Rain 2, even if you don't, you may want to try something that is quite different from what is currently on the market.