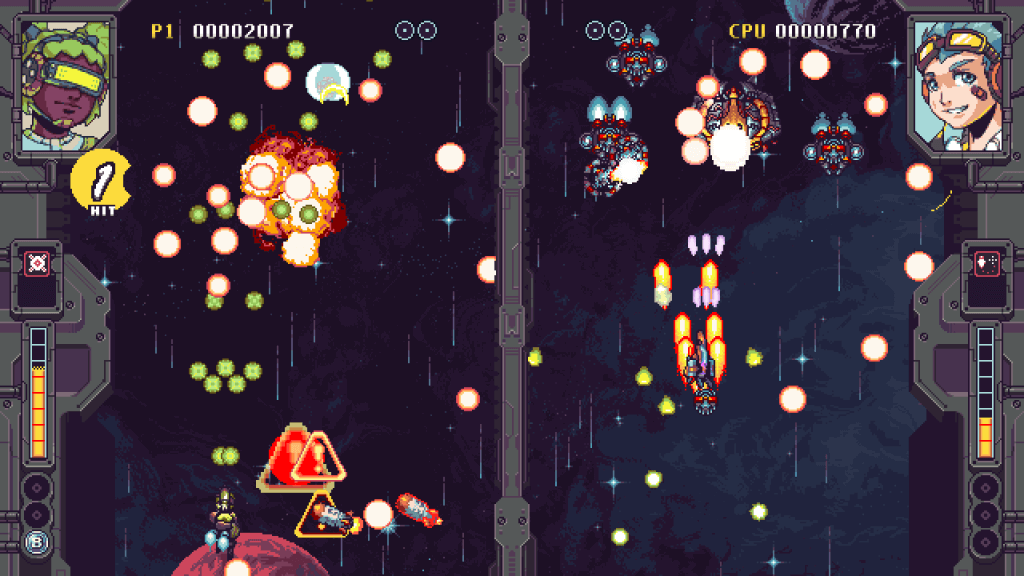 Bullet hell games, like most games in common genres, are a dime a dozen. Even if a bit repetitive, a comforting expectation comes from knowing what you’re going to get with games like this. Coop bullet hell games are also fairly common, but not as much as those focused on single player. Then, games like Rival Megagun come around and offer something quite uncommon: bullet hell PvP.

First, let’s get the premise out of the way. Aliens have blockaded all traffic on and off the planet, destroying anyone or anything that attempts to leave. After decades of this, the people of Earth cried out for a hero. In order to find said hero, a game show arrived to pit contestants against each other to see who deserves the opportunity to defend Earth. Talk about metaphors. Rival Megagun is not a beautiful game, as it’s inspired by older gaming visuals and styles. With that said, the art direction itself is wonderful, aided by its reach into older styles refined for modern displays. Sound effects add wonderful ambiance as well. The soundtrack, however, lacks much emphasis. Surely, a good soundtrack never gets in the way of the game. Still, a good soundtrack escalates an experience. This one simply comes along for the ride.

One visual issue I came across is one I find fairly often in bullet hell games: common projectile colors. Colors help indicate differences between who is firing and what is being fired. Since so much of bullet hell games rely on peripheral vision, this concept is a primary concern. Only a couple projectiles have the same color, and some blend into the background too well. This does not break the game by any stretch, especially since you have two hits before dying and can pick up repair kits along the way.

PvP adds so much to bullet hell

Apart from the final boss, essentially all of this game is played in split screen, whether you’re up against a real player or the computer. What makes this concept intriguing is that it offers a new layer to your actions without breaking away from the age-old bullet-hell formula at all. Building combos is still the name of the game, but those combos are no longer just for points. Combo chains drop enemies onto the second player’s screen. Longer combos yield bigger and badder targets for your opponent to contend with.

You have the option to drop a steady wave of enemies and obstacles on your opponent. You also have the option to store the energy you build up and transform into a fully-loaded Mega Gunship mini-boss. Having these options grants you the choice of trying to quickly dispatch your opponent with quick tricks or hold off for an all-out onslaught.

This goes both ways, however. You have access to all of these combat options, but your opponent does, too. Combining this with a healthy array of different characters as well as four difficulties makes for a great deal of content for you and a friend. Rival Megagun is a game meant for competitive play against real people. There’s no denying that, as it works so wonderfully well without messing up the age-old formula that makes these types of games so much fun. At the same time, solo play is still a joy. Each character has its own weaponry, some favoring straightforward firepower while some favor a wider spread for reduced damage. Messing with these combinations adds some nice variety to the overall package. Plus, players have the option to play either locally or online.

With that said, apart from story mode and competitive, there is very little extra here. The package as it is still offers a fair amount. Still, an extra game mode, even at $15, would have made this a prime package indeed.

It’s hard to go wrong with Rival Megagun, no matter how you look at it. Competitive play freshens up an old formula wonderful without getting in its own way. Some visual discrepancies, lackluster soundtrack, and minimal game modes aside, Rival Megagun is a must at $15 for anyone wanting an engaging, refreshing bullet hell title.

Rival Megagun has what every good shoot-em up has and tops it off with engaging competitive play. Apart from a few disparages, Rival Megagun offers a unique idea to an old formula and comes out on top.