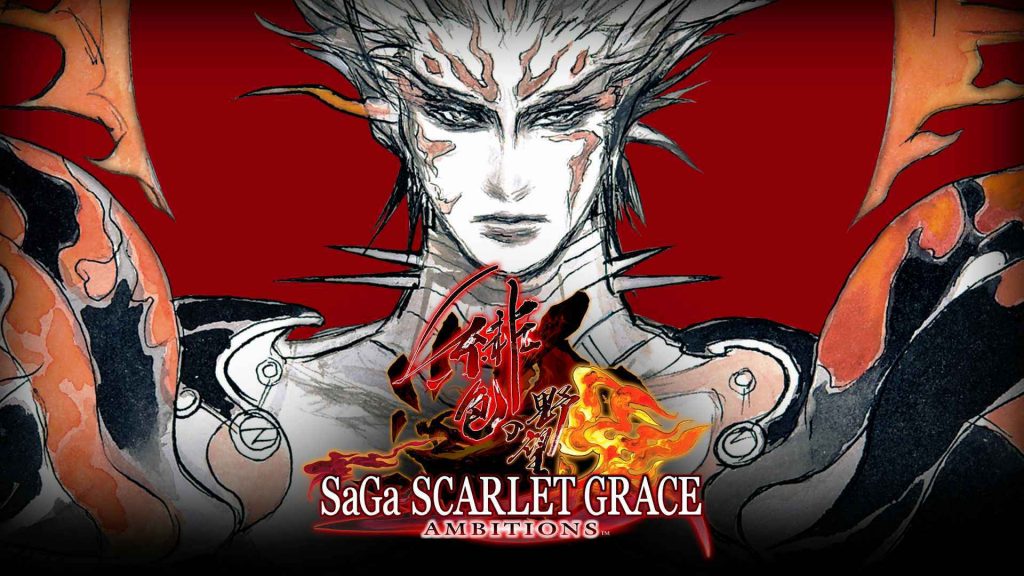 A Tale In Parts

Before the game really starts, SaGa Scarlet Grace: Ambitions asks the player a series of questions. These vague questions help to determine which character you best relate to. In my case, my first character was Urpina, the kind, upstanding daughter from the Julanius family, which is one of several families to ascend to royalty. For such a challenging game, it did its best to provide me with a character whose personality I could easily relate to, to make my first hours of learning the game that much more engaging.

What made for a very intriguing experience was having multiple storylines to go through. Even better still is the fact that each one offers something different. Some storylines are very linear, some are open-ended, and others hearken to similar RPG patterns. What unifies these four different storylines is a visual style all its own.

In many ways, SaGa visually looks like an old-school RPG. World maps are flat, with almost pop-up book-like visuals showing the different locales and enemies you can interact with. At the same time, everything is so clean and crisp that enjoying it all is so easy. This visual style somehow translates itself from 2D into 3D with commendable seamlessness, as the scene changes from the world map to combat effortlessly.

To accompany all of this visual appeal, SaGa features a stellar musical score. Every track embodies the moment in which it’s played, making for a complete package through and through. There is one track that really stuck with me. In desperate situations, a cello-focused piece plays, and I linger in those moments much longer just so I can keep listening to it.

Prepare For Combat, Because It’s Stellar

Combat is where SaGa truly takes the cake and eats it, too. SaGa gives direction here and there, but you spend most of the game fending for yourself. What facilitates SaGa’s approach is how simplistic its systems are to grasp. That’s not to say that they’re dull systems, but rather the ways these systems are delivered over time allow for a clear understanding.

Like many RPGs before it, and like its predecessors, SaGa is a turn-based RPG. Attacking order appears at the bottom of the screen, with each avatar showing roughly how much health that represented individual has. A great deal of information gets packed into that small section of the lower screen. However, the minimalist delivery is so easy to understand that none of that information gets convoluted.

To add to this, your entire party, or your retinue, all depend on a series of stars just above the attack order, with each star representing one Battle Point (BP). All attacks and skills require specific amounts of BP, and this limitation affects what characters can attack and what skills those characters can use. Your entire retinue has only four BP to start the first round, with one BP accumulating each round. As individual battles progress, the amount and types of attacks you can use increase as you gain more BP.

If you take too long to dispatch your enemies, they will build up enough BP to unleash their stronger skills. To make matters worse, they also have access to United Attacks. When conditions are met, the entire retinue converges on a single target for a massive hit of damage. They can do it to you, and you can do it to them; it’s all about controlling the conditions of combat to stay in your favor.

Another rather wonderful aspect of combat is the benefit of learning new skills. By performing skills with specific weapons, each character learns new skills relative to that weapon. Even better still is that skills are learned mid-combat, and are then used free and clear one time immediately after learning them. These spontaneous advantages add such wonderful drama to a combat scheme that’s already engaging.

Through and through, SaGa Scarlet Grace offers a certain challenge, especially when it comes to RPGs. At the same time, it has some oddities that cannot be ignored. SaGa is challenging, but it’s not an even challenge. Early on, easy fights have the potential to go south on you quickly, but just as quickly, the medium-difficulty fights become old hat and hard fights prove to be almost easier than easy fights were at the beginning of the game.

This is not where the difficulty oddities end, however. Each character maxes out at level 50 with each weapon they use. However, enemies do not have similar thresholds. The longer you play after reaching those thresholds, the harder enemies become.

Soon, enemies become immensely hard to handle. This quickly leaves a somewhat cheapened feeling after such an enjoyable experience, despite the heavy doses of grinding. That kind of shift in difficulty is frustrating, even if SaGa auto-saves your progress before each fight; you can’t necessarily lose your progress, but you can just as easily feel stuck behind the same fight. If progression had seen the challenge grow over time, the end result would undoubtedly feel more palatable.

All in all, SaGa Scarlet Grace: Ambitions delivers a beloved franchise into the modern era with a beautiful style and addictive combat. Difficulty shifts from almost abrasive to borderline harmless and swiftly back to abrasive, make for what can be an antagonizing climax to a stellar RPG. Outside of that, SaGa Scarlet Grace marries the old with the new and manages to help you learn its ways without holding your hand. Any JRPG fan could easily sink their teeth into this gem if they give it half a chance.

SaGa Scarlet Grace is out now on PS4, Nintendo Switch, and Steam.

SaGa Scarlet Grace: Ambitions blends the challenge of olden JRPG days with the aesthetic refinement of modern gaming to create a tantilizing final product. Difficulty waivers back and forth in odd ways, but the narrative and combat keep everything feeling engaging and enjoyable.