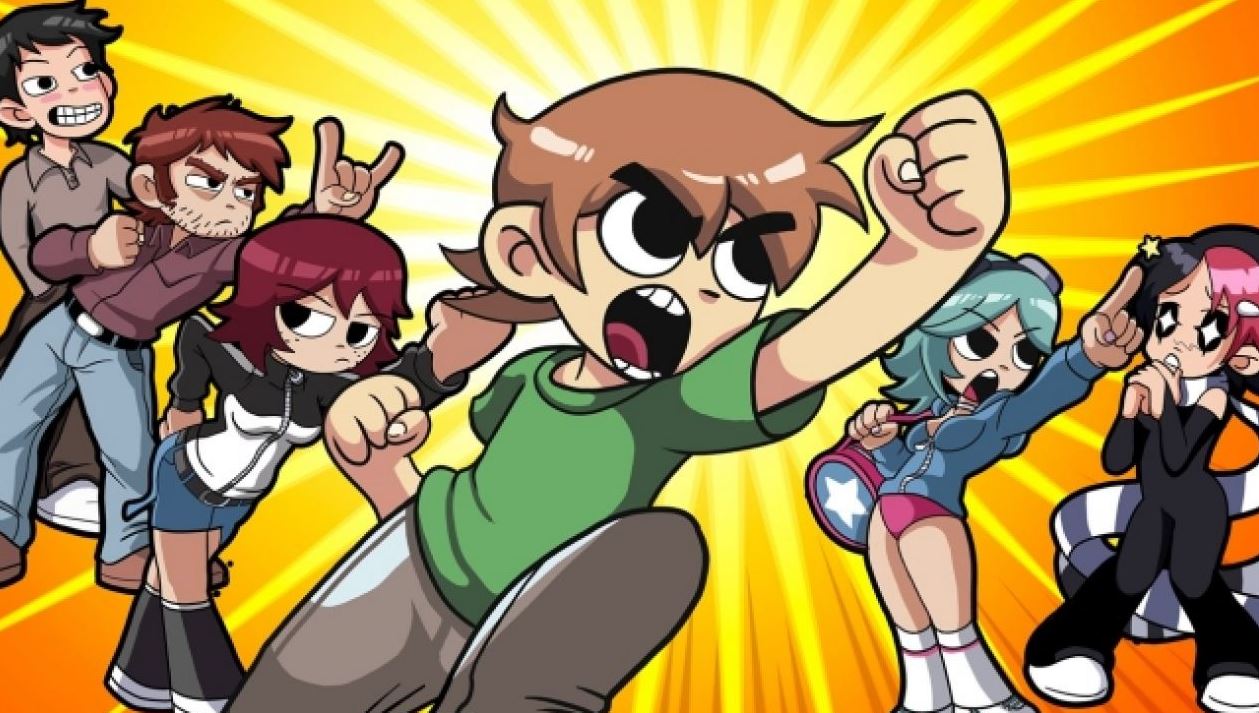 Scott Pilgrim Vs The World: Complete Edition PS4 Review. One of the casualties of the digital age of gaming, Scott Pilgrim vs. The World is reborn a decade after its original release, and I’m pleased to say it’s as incessantly joyful and chaotic to play now as it was then. Provided you play it with others, that is.

Dropped Right Into The World

The game, inspired by Brian Lee O’ Malley’s hit graphic novel, is a throwback to classic arcade brawlers, with a team of up to four players able to dish out beatings on the streets of rage (well, streets of Toronto actually). The plot, taken directly from the source, sees aimless musician and nerd Scott Pilgrim find what he believes to be the love of his life in the cool and mysterious Ramona Flowers.

The only problem is, Ramona carries a lot of emotional baggage from past relationships, and they just so happen to be a real, physical threat to Mr. Pilgrim’s continuing existence. Pilgrim must battle his way through legions of goons and seven of Ramona’s deadly evil exes to remove all obstacles in the path of a happy ever after. 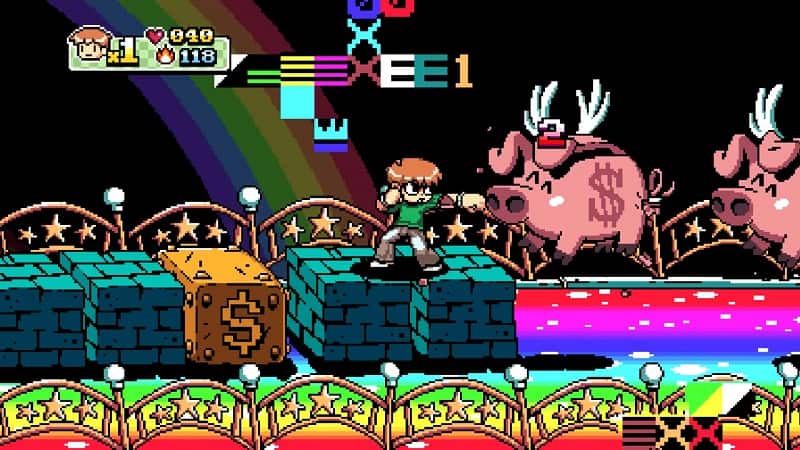 The graphic novel series was already steeped in delightful nods to video game nerdiness and the game’s that inspired O’ Malley as a young man, so making that story into an arcade brawler always made perfect sense. The combination of absurd video game logic and the awkward realities of traversing relationships in our youth make for a fascinating template for a game, book, and even film. O’ Malley’s novels have proved to be perfectly adaptable in the right hands.

Edgar Wright’s 2010 film adaptation captures the spirit of the graphic novel with aplomb, and Ubisoft Montreal’s beat ‘em up, which originally came out alongside Wright’s film, is no different.

This complete edition brings everything from the original 2010 release that infamously got delisted just four years later, and throws in the DLC too (said DLC allows you to play as more characters, including Knives Chau). It’s the same game it was then, down to that awesome chiptune soundtrack by Anamanaguchi. Extras such as the Boss Rush and Survival Horror mode are now available from the start rather than as unlockables. 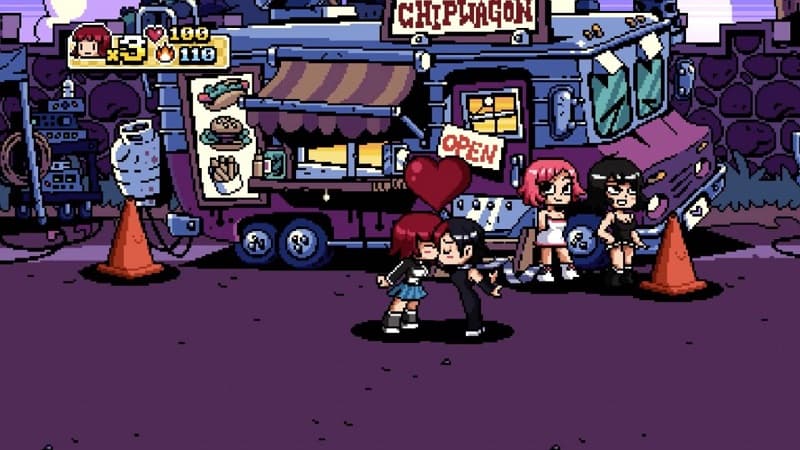 As with other beat ‘em ups, Scott Pilgrim sees you scroll from left to right on a 2D plane, duffing up the bad guys and picking up various bits of scenery to use as makeshift weaponry until you reach the stage’s conclusion (usually a boss fight against one of the seven evil exes). Even on the lower difficulty, enemies come at you in groups, which becomes absolute anarchy when you factor in another three players.

The thing is, Scott Pilgrim’s visual style, a mix of the graphic novel and retrotastic pixel-based arcade game, is well-suited to that anarchy, and the best of it comes from being together, wading through a sea of slackers, thugs, and the like as backgrounds continue to visibly bounce with their own activity. Even last year’s excellent Streets of Rage 4 didn’t capture the full-tilt dizzying explosion of colour and noise synonymous with those arcade cabinets of the 90s quite like Scott Pilgrim does.

As nice as evoking nostalgia is, Scott Pilgrim isn’t just a cut and paste throwback beat ‘em up in every single way. The in-world obsession with other games shines through in the RPG-esque use of items to buff stats, and the levelling up of characters which unlocks a wider array of moves. Much like an RPG, health ‘potions’ and stats boosts can be bought in shops, but being set in 90s Toronto, they’re found in places like coffee shops, pizzerias, and record stores as everyday items.

While most things are purchased and consumed in the store, taking food ‘to go’ amusingly means you’re taking a health fix to help you out later when you need it in battle. It’s little touches like this that help Scott Pilgrim stick out. It’s things like this that’s worth keeping in mind during your first experiences with the game, because behind the adorably geeky façade, Scott Pilgrim the game is much like the character…a bit of a bastard. 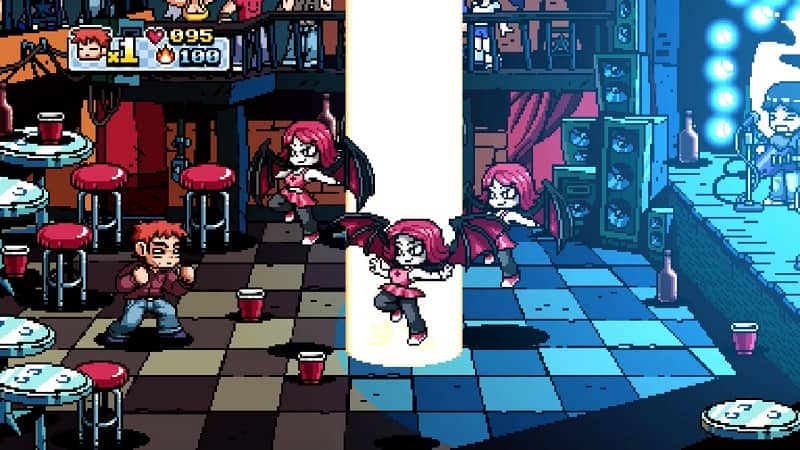 Worth It If You Stick With It

At first, Scott Pilgrim can seem like it’s a bit too tough for its own good, leaving you open to frustrating cheap shots, and overwhelming you with audiovisual detail, but as you level up characters, and get a feel for enemy patterns, the challenge becomes a more satisfying one. That’s not to say it’s unpleasant before that, just that it can feel like a slightly unnecessary obstacle to really getting into the game earlier.

It’s also not anywhere near as fun on your own. Scott Pilgrim was made to be played with others. From the cool combo moves to the dramatic last gap saving of teammates, the excitable chaos of this beat ‘em up burns brightest when teaming up either locally or online.

On your own, there’s nobody to bail you out in a tricky situation, nobody to draw attention away from you when necessary, and the combat is not really deep enough in solo play to avoid it feeling a bit repetitive after a while. It’s no disaster alone, but there’s a definite downgrade in the entertainment value on offer. That’s still a relatively minor grievance in the grand scheme of things. 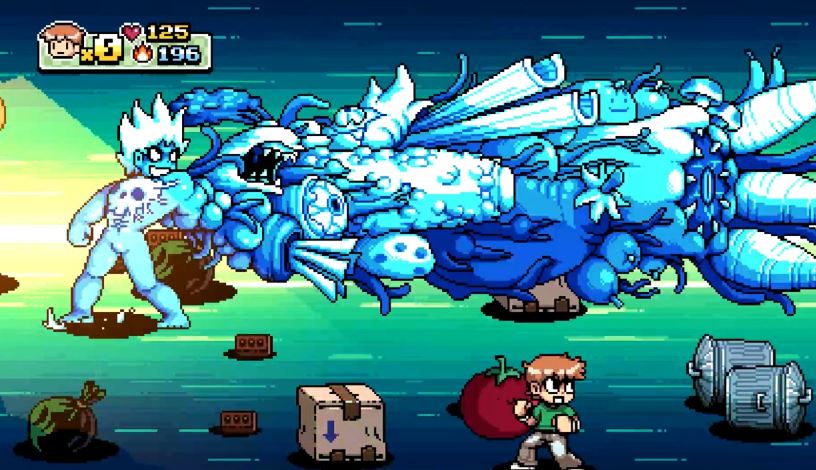 A Slick And Vibrant Translation Of The Source Material

Scott Pilgrim vs. The World: The Game now exists in a world where the beat ‘em up genre has had new greats such as River City Girls and Streets of Rage 4, which have upped the game somewhat. Yet there’s no doubt that Scott Pilgrim is still a top tier example of the genre for its winning fusion of nostalgia and playability.

There’s a reason it built up a following beyond the simple fact it vanished from digital storefronts for almost seven years. It’s a slick, vibrant festival of colour, chaos, and geekery befitting the source material.

Scott Pilgrim Vs The World: Complete Edition releases for PS4 on January 14, 2021, and is playable on PS5 via backwards compatibility.

The landscape of the beat ‘em up genre may have altered in the ten years since Scott Pilgrim vs. The World: The Game first released, but it’s return is wholly welcome. A wonderful compliment to the graphic novel series, and a stylish throwback to the delightfully gaudy brawlers that boomed and bloomed loudly in 90s arcades. Add friends for maximum impact.