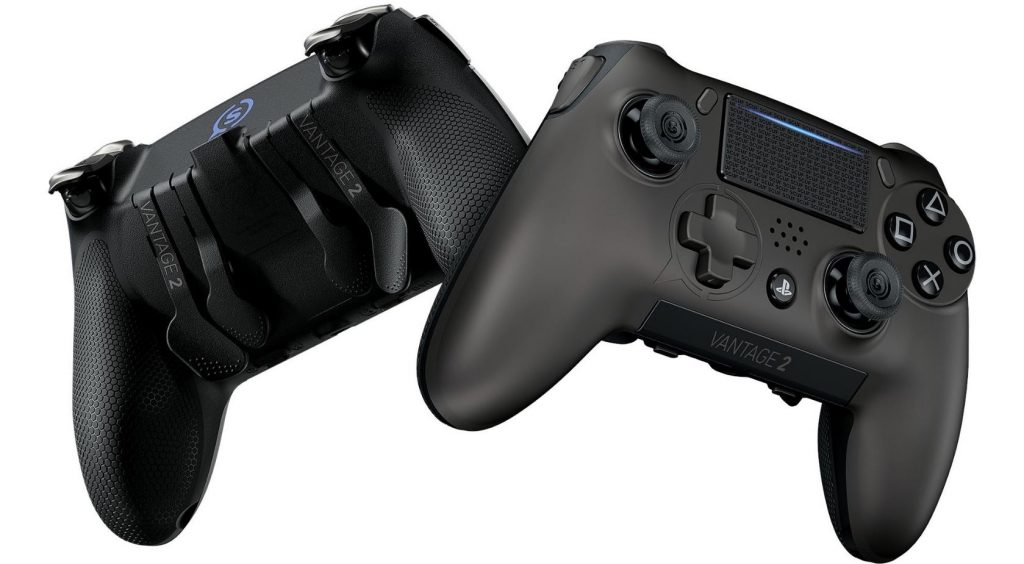 Since I reviewed the first SCUF Vantage pad, another pro controller has crossed my path in the Thrustmaster eSwap. While both of these controllers offer heavy-duty customization, I kept finding myself going back to the Thrustmaster. As I mentioned in my Vantage review, one of the biggest issues I had came with how my smaller hands fit the controller. I kept going back to the eSwap for that reason, even though that controller only offers a wired connectivity.

Then the SCUF Vantage 2 arrives, and I’m given a second opportunity with SCUF’s craftsmanship. I truly enjoyed my time with the Vantage, despite my nagging issues with some of its design choices. That’s why I was so excited to get my hands on an improved model. A few strong adjustments could easily make the Vantage 2 a permanent replacement for the DualShock 4.

Improved But Much The Same

In other words, I’m not having to compensate my hand positioning in order to easily use the joysticks. The other area of the controller where size is an issue appears with the R and L1 and 2 buttons. I can just about rest my pointer fingers where I want them normally on a controller. At the same time, I still feel like I have to pull my fingers down the back of the controller more, rather than down into the button itself, in order to completely press the trigger in.

The same issues I had with voice chat and audio persist with the Vantage 2. I often found myself resting my thumbs on the volume pad, an act which will mute your voice no matter where you touch the pad. Party chat cannot even be used with a wired-in headset unless the Vantage 2 is in wired mode. Much like the original Vantage, the Vantage 2 will turn on your PS4 while the controller is in wireless mode. With that said, the Vantage 2 turns the PS4 back on when placed in Rest Mode. This could be because this controller does not charge when the PS4 is in Rest Mode.

Weight is the first big difference with the Vantage 2 versus its predecessor. It offers just enough of a lessened weight that holding the controller requires less hand tension. While the size of the controller is somewhat smaller, the real difference comes with its weight. This adjustment allows for fingers to dedicate themselves more to button input rather than stabilizing the controller itself.

The sax buttons on the back of the controller can be removed as well. Instead of simply being pulled out of their place, the sax buttons instead slide up and out of a tension slot. With the actual input buttons being very small and embedded, there is no way to accidentally press the extra buttons on the back of the controller when the sax paddles are not installed. I found myself removing the inside two sax buttons, labeled P2 and P3, because they took too much effort for me to reach, but I kept P1 and P2 because my middle fingers rest on them perfectly.

All of the improvements are great, despite the fact that not everything is completely ironed out. As a third party controller, the Vantage 2 offers up so much that it’s hard to ignore. At the same time, who is the target audience for this product? Is there enough for original Vantage adopters to invest in the next rendition, and is this controller’s list of pros and cons enough for casual gamers to invest a minimum of $170?

A delayed arrival has our review coming out quite a while after the SCUF Vantage 2 launched, so those who really want this controller already have it. So really, this review is meant for everyone else. The ability to remove more unused buttons, the adjusted size, and reduced weight make this a solid improvement over the original Vantage. At the same time, $170 is a lot to ask for from anyone on the fence.

The SCUF Vantage 2 will be important to you if you demand deep customizability from your controller. Truly, the Vantage 2 does so much right that it’s hard to ignore. At the same time, some of its lingering oddities from its predecessor keep this from being that game-changing peripheral. While it may not be enough to upgrade, the Vantage 2 is one of those controllers worth your time if you truly need to up your game.

The SCUF Vantage 2 Wireless Controller is out now.