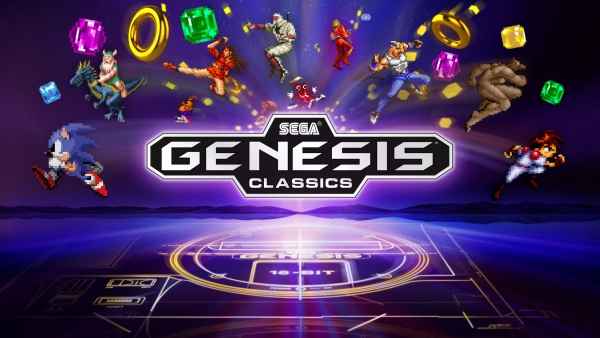 Sega’s recent revival in the gaming world has been particularly pleasant to see. It’s a heartening reminder that the Japanese company once went toe-to-toe with Nintendo and held its own. Sega Genesis Classics comes at just the right time for newcomers to Sega’s history, and that’s really the key audience that this latest repackage of Sega 16-bit hits n’ misses is for.

The Sega Genesis Classics brings around 50 titles synonymous with the glory days of Sega’s 16-bit juggernaut, and naturally there’s some genuine classics to be found, but you’d be hard-pressed to find 50 ‘great’ titles on a single console, so there are some middling games on the roster, and more than one that is, to put it gently, a bit shit. Oh, and there are some unfortunate omissions (miss you, Ecco).

I could cover all 50 games, but frankly, we’d be here a while. So instead I’ll select some of the good, the bad, and the dated.

So let’s get the bad eggs out of the basket first. Altered Beast has always been guff. Age has unsurprisingly not helped it become any less so, but the 2D nature of the era means it’s not got much worse in the thirty years since it first released.

It has had a cult appeal over the years, which would be baffling if you didn’t know the game was often bundled for free with the Mega Drive and in a cheapo game collection. Considering the side-scrolling scrappers it finds itself alongside in this collection, it’s almost shocking to see its continued presence.

Super Thunder Blade. A game that does Space Harrier with a helicopter, is another infamous ever-present. The fiddly, drab shooter-type doesn’t have quite the saving grace of Altered Beast because it continues to become more and more repellent to play with every passing year.

Sonic 3D is the Sega Mega Drive Classics’ example of the Sonic brand during a low point and Flicky? Flicky makes me angry just thinking about that stupid bloody bird.

Now onto the positives, and boy are there some positives!

Sonic the Hedgehog and Sonic 2 are, without doubt, a huge highlight. The blue blur is at his highest point in these titles. It is unfortunate that Sonic 3 and Knuckles is missing though. all three Streets of Rage games are here, and the first two are still pretty damn great beat ’em ups (the third is decent, but disappointing coming after the second game).

Bonanza Bros. is an underrated multiplayer gem, Columns remains as addictive and hypnotic as ever (Dr. Robotnik’s Mean Bean Machine is also good, but still a bugger to beat), and you can’t go wrong with any of the three Golden Axe titles found here. In a similar vein, Alien Breed is perhaps better still.

Toe Jam and Earl, who didn’t feature in the last collection, have two games here, and they remain among the kookiest and most charmingly offbeat titles of that era. It’s hard not to have a big old smile on your face playing Toe Jam and Earl.

The rest of the package is hit and miss. Games like Alex Kidd in Miracle World were once considered rather good, but have not aged quite as well as some of their 16-bit brethren, only maintaining a mournful hint of what they once were. Still, for the sake of nostalgia, they’re at least fun for a quick blast here and there. Unfortunately for newcomers, it means a fair few games are going to be hard to like, let alone love.

Also not helpful is seemingly random latency issues. It doesn’t seem to be tied to any one game at any given point within them. It even feels like it might just be your imagination, but it is there, popping up now and again for no discernable reason. This naturally leads to some frustration, but thanks to the joy of the save slot (that these games simply did not have in the 90’s) the impact is somewhat lessened. That doesn’t stop it from being disappointing of course.

In brighter news, the new touches to the package are quite lovely. There’s a selection of visual options, meaning you can make the games look smooth and crisp or bring back that CRT scuzz. The main menu is inspired. It recreates a 90’s bedroom, complete with CRT telly, the console underneath it and a virtual shelf of every title in the Sega Mega Drive Classics library. It was hard to hide my glee at picking a game case off the shelf and seeing the cartridge slot into the virtual console before booting up on the virtual television. It’s a splendid tribute to the era.

There’s a set of challenges to add a twist to existing titles. Some plop you in the middle of a game and require you to gain a certain score level, while others are timed challenges. There are only a dozen or so of these challenges, but they’re interesting and most importantly, are actually challenging.

So does any of this make Sega Genesis Classics a worthy purchase? If you’ve purchased these games before ( I know I have…many, many times) then there’s little beyond convenience and a few challenges and trophies to entice you. For newcomers, there are enough solid to great titles worth playing, but the occasional latency hiccup makes some games a lot harder to love. All in all, there’s not much to complain about really beyond that and a few duff games that just won’t seem to vanish into obscurity. So convenience and/or curiosity are the real draws.

This collection of titles from a golden age of Sega has some of the greatest 16-bit games ever made included, and also features a few important, if dated, gems. The extra challenges and nifty menu screen are pleasing additions, but thanks to minor latency issues and the existence of multiple Sega game collections over the years, this is only really recommended for the sake of convenience and/or curiosity.