A quick poll here. Who wanted to be (or indeed still does) a Ninja when they were growing up? Though I have no way of actually telling how many people nodded, raised their hand or chuckled as they flung shurikens in the air, I can guess it was at least all of you. What’s not to love about Ninjas? The get to do all that hopping about, being sort of invisible and slicing up fools in that snazzy outfit. I’m so excited thinking about Ninjas that I just sorted myself a makeshift shinobi shozoku with some bedsheets and a towel. Anway, by extension, games where you play as a Ninja are also pretty damned sweet, so Shadow Blade: Reload is already off to a good start by being just that. Shadow Blade: Reload is indeed about a Ninja doing Ninja things (except the whole being sort of invisible thing), but more than anything it’s about platform-based speed. Your black-clad protagonist is against the clock in each two-dimensional stage, and must also try to avoid every spike trap, murderlize every goon, collect every glowing dot, and nab every big, green Kanji while he’s at it. It’s best described as Shinobi meets Super Meat Boy, requiring concentration, rhythm and digit dexterity in order to find the quickest route to the end, with the most amount of carnage caused, like the Tories, or Jose Mourinho.

Your first playthrough will not likely be buttery-smooth though. Learning the ropes is the order of the day during your first run, and you’ll struggle to come close to the best times and scores of each stage initially. The game gently tosses new hazards and enemies at you every other level or so to keep things interesting. The initial experience is more of a stop/start fumble through enemy encounters, and awkwardly steering away from obstacles, than a rhythmic ballet of slicing, dicing and jumping, but that’s okay; it’s to be expected, and all the game requires of you on a base level is to just reach the end of each stage. You don’t have to beat every time, find every Kanji, pick up every glowing dot or even destroy every bad guy to progress—that simply makes up the incentives to do better later.

During the early stages, the game is pretty generous with your mistakes. You get a couple of chances to off enemies and obstacles give you a wide enough berth that you should only be hitting them regularly if you’ve fallen asleep or have a serious agenda against Ninjas. This works well to introduce you to the intricacies of the game. The pacing of the introduction for each new obstacle and enemy is handled pretty nicely, with the right amount of escalation occurring, and mercifully, no ridiculous difficulty spikes appear to be in place. Sadly, variation isn’t great enough to prevent a bit of that ol’ rascal repetition sneaking in. After all, you end up doing pretty much the same thing in every stage, with little change up beyond what’s trying to hit you. It’s exactly why the time attack and grading is in there, because it’d just get a tad dull if this was all you could do.

Don’t get me wrong here; Shadow Blade excels when you find that rhythmic sweet spot. Bouncing off walls, grazing past dangers and running through the baddies without missing a beat is a sight to behold. Pulling it off and getting it done in a quick time is an immensely satisfying feeling, and certainly one that the game tries to make you continually yearn for. When things aren’t so fluid and balletic is when it loses a lot of that adrenaline and feels like a substandard platformer with some speedy bits. If chasing the high-score dragon isn’t your bag, then Shadow Blade is a very weak choice based on the merits of platforming alone. It takes a good chunk of stages before any real challenge comes into play and even then it’s the time attack stuff that is the driving force that compels the player forward, rather than any interest in the story, (told in comic book panels) which don’t exactly inspire much beyond the urge to skip them. 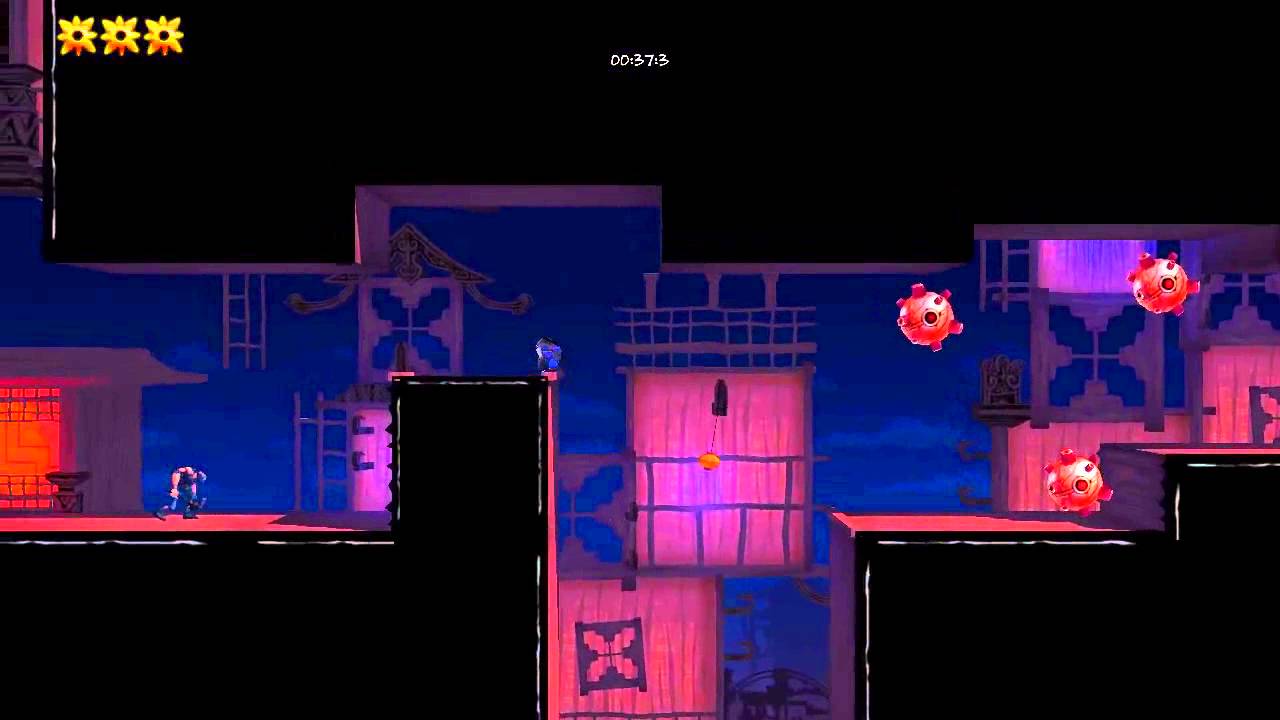 Perhaps the biggest issue is with how little innovation there is on show. As mentioned, platforming is merely serviceable, even with the dangling carrot of time attacks and high scores to motivate you. The game’s overall design is also at fault here, an endless procession of similar building interiors in different colors and bland, generic enemy types. Even the boss encounters are a tad trite, too reliant on what has come before instead of trying to have a bit of fun with the established tropes (oh! A mech boss! Yay!). It’s a colorful game for sure, but the art style is nothing to truly catch your eye. It only really looks half decent when a smooth, skillful run is being performed, and that’s not guaranteed for everyone.

Does that make Shadow Blade: Reload a bad game then? No, of course not. It’s just at its very best only within certain parameters, and those parameters are a little too particular for the tastes of many. I can think of at least three other ‘twitch runner’ type platformers without any effort that all do something better than Shadow Blade. This is still an enjoyable game, for how long is entirely dependent on your patience and investment. It isn’t like the game doesn’t bother to keep you on the hook; it just simply does not do enough. A bit of a missed opportunity then. Ah well, it still has Ninjas.

While nothing remarkable, Shadow Blade: Reload does at least do a solid twitch platforming job. When it’s hitting its lightning stride, it’s actually quite fun, but too often it trots along being bland and unimpressive instead.