It’s astounding to think Shadow Warrior ended up outliving Duke Nukem in terms of relevance. Yet here we are, in 2017, and the continuing tongue in cheek adventures of wannabe ninja, and all-round creepazoid, Lo Wang sees a second entry on PS4 while Duke is off crashing the parties of other games like the washed up celeb he is. Will Shadow Warrior 2 see an extension to Lo Wang’s time in the limelight?

Shadow Warrior 2 follows up from 2014’s nonsensical carnage-fuelled reboot/sequel of the now twenty year old original shooter. As before, Shadow Warrior 2 is awash with puerile humor, terrible puns, and lots of gun and katana-wielding destruction of hordes of demons. Only this time, it’s gone open world with a focus on co-op play, both unfortunate choices for anyone hoping for a solid, meaty blast of single player shenanigans. Lo Wang gets to walk around a hub world, accepting quests, upgrading weapons, and finding trinkets, and when he departs for a mission, you find yourself in a slightly less confined series of levels than before, but still effectively just corridors and square open rooms to hack, slash, and joke around in.


Plot is unsurprisingly light (and a touch recycled from last time) beyond that demon-killing, with the focus almost solely on finding ways for Lo Wang to chop and blast his way through enemies whilst making increasingly terrible jokes, and you know what? That’s perfectly fine on the surface because that’s what the game is all about: raw Oni-battering and dick jokes. Wang is less a protagonist and more a quip machine with weapons taped to it, but when Shadow Warrior 2  is in full swing, it’s easy enough to put that aside and focus on the carnage. A shame then that full swing is so rarely achieved in Shadow Warrior 2. 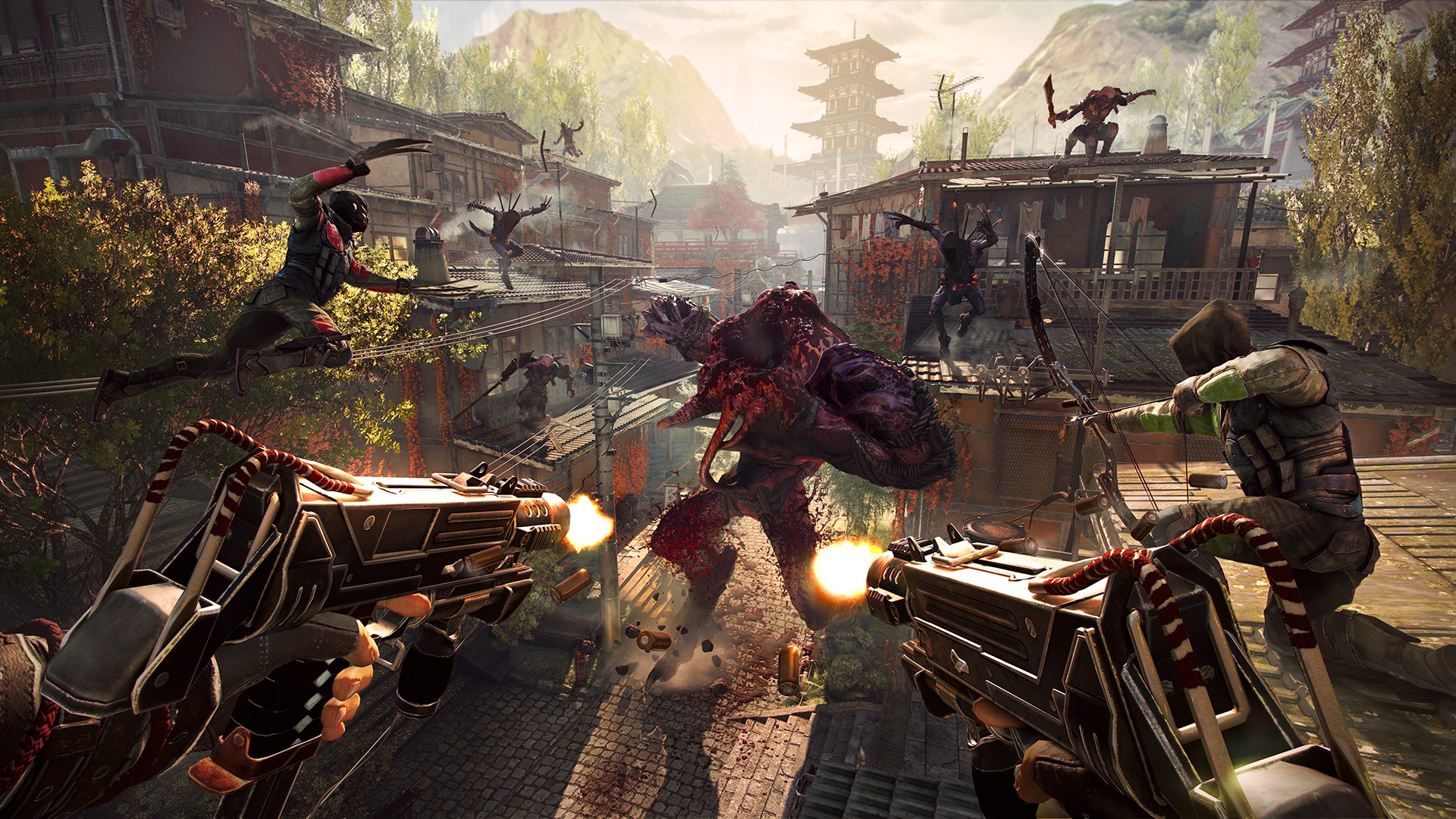 The hub world, for instance, is fine in theory, but Shadow Warrior 2 almost always suffers when the action slows or stops, and the hub world is where the game’s inertia comes to a screeching halt. It runs against the mantra of relentless slice n’ shoot that works to the game’s strengths. It feels alien to the core game, and more than a little unnecessary as additions go. On the upside, the game’s visual upgrade over its predecessor is welcome. It may not be anything mind blowing, and a little rough around the edges, but it’s consistently a step up from the original in all departments.


Out on the missions, things improve somewhat. The aforementioned ‘full swing’ kicks in as various goons and demons rush at you from every angle as you gracefully zip about, juggling swords and guns for maximum effect. Not only are the weapons upgradeable, they also come in a variety of flavors to help battle trickier foes. You’ll obtain swords that range from hooked blades to energy-flinging katanas, and guns as familiar as shotguns to less grounded fare such as laser rifles. Combining these for the most destructive results possible is Shadow Warrior 2 at its finest. Fountains of gore bursting forth from a mass of foes, muzzle flashes followed by the shimmer of a blade, connecting as if it were a symphony of violence.


These moments are fleeting in the context of a mission’s length, as most of the time you’ll only be dispatching a handful of enemies, and the drop in intensity makes the combat feel clunky and awkward. So the majority of your time is spent being bored or unimpressed by Shadow Warrior 2’s mechanics, with a brief respite when things heat up. Mercifully, the deeper into the game you go, the higher the number of titanic skirmishes you’ll be involved in, but the downsides have already worn down the enjoyment of them. 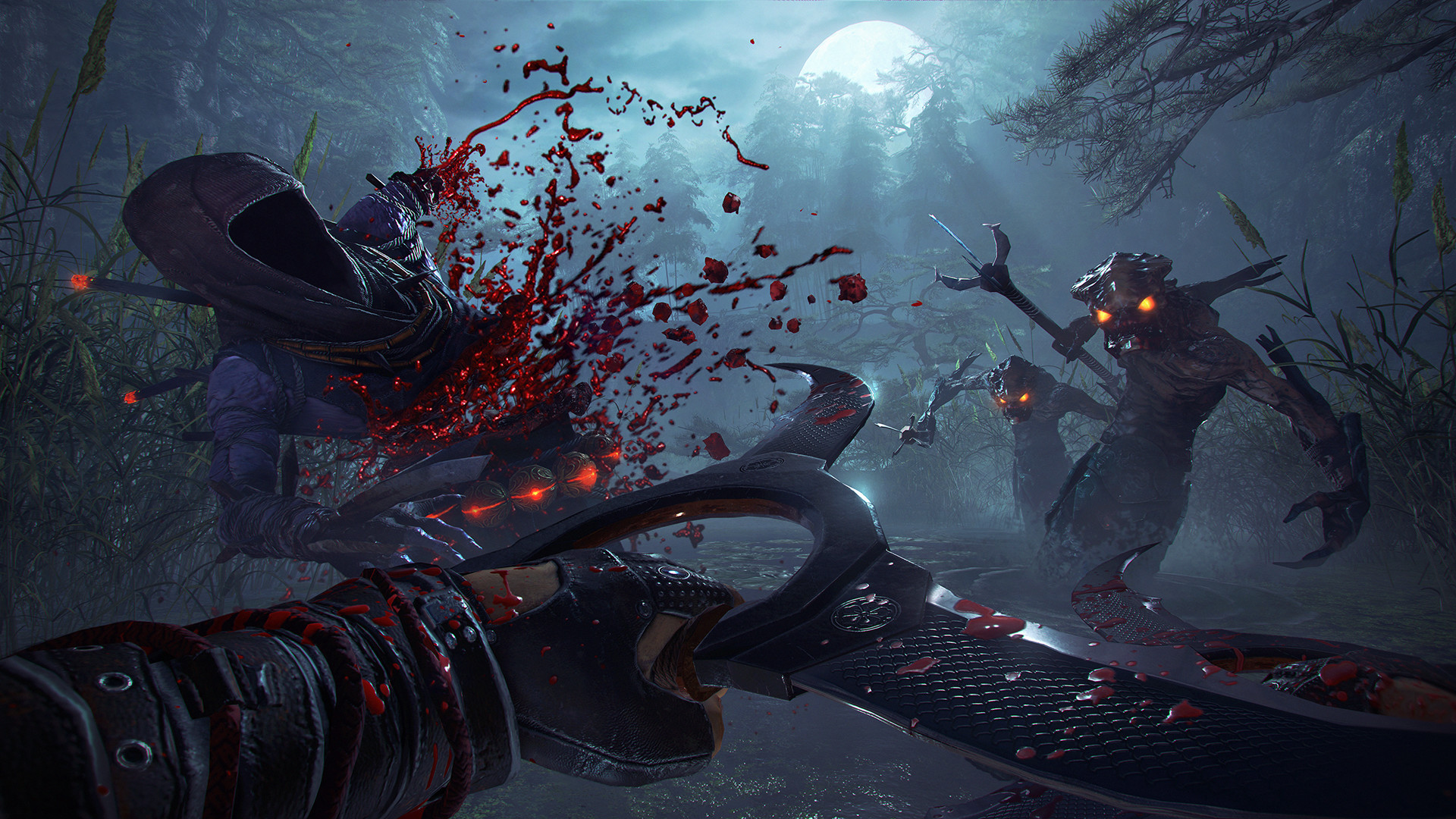 Shadow Warrior 2’s other major gripe is that the campaign is overly long. There’s a reason purer shooters tend to have 6-8 hour campaigns. Going past that stretches any novelty value, diminishes any decent gameplay loop, and adds bloat to any story. As Shadow Warrior 2 doesn’t care much for story, that’s one problem. The satisfying aspect of Shadow Warrior 2’s gameplay loop is already too brief a feature, so, as I said before, the enjoyment is drained by the time you slog your way into the final hours. As for the novelty value? Well, it’s entirely subjective as to whether you find Shadow Warrior 2’s brand of gleefully profane humour enjoyable to begin with, but it sure does get stretched to breaking point.


If this was it, then Shadow Warrior 2 would be a truly tough game to recommend to anyone but the most fanatical of shooter fans, but the saving grace is that you can play the game in co-op multiplayer with up to three other players. Suddenly, those dull and frustrating moments don’t seem so bad as you slice, dice, and smash your way through the Oni horde together. This is where the more open setting makes sense, as it prevents you all bottlenecking into a corridor. It becomes abundantly clear that this was what developer Flying Wild Hog had meant for Shadow Warrior 2 to be, and it succeeds in being a riotous co-op shooter with impressive ease.


It doesn’t excuse those glaring faults of course, but it’s amazing how much gloss a decent multiplayer component can put on a heavily flawed solo setup. There’s better shooters out there for sure, but in co-op at least, Shadow Warrior 2 delivers on its promise of unabashed, camp schlocky violence with aplomb.

Flying Wild Hog has gone for ‘bigger is better’ on Shadow Warrior 2, and occasionally that works. Sadly, there’s too much open space and inconsistent combat to make it a memorable return for the puerile Lo Wang. These issues are patched over somewhat by the highly enjoyable co-op, where you get a fair share of chucks out of mowing down hordes of demons with pals.