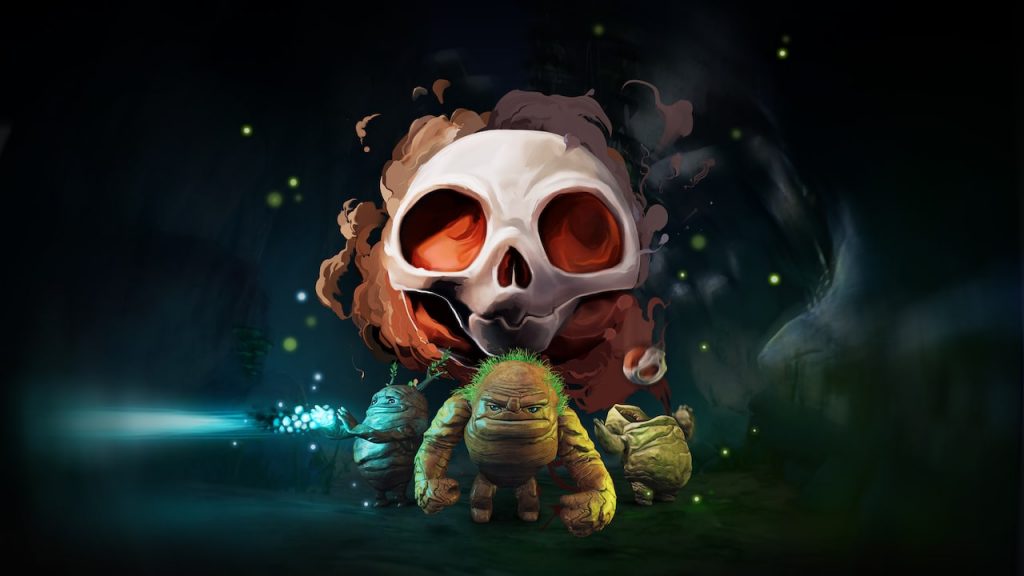 Skully PS4 Review – Every game reviewer knows the moment. You sit down with an innocuous new game that you have agreed to review. You watch the credits and the amusing opening cinematics. You play through the thirty-minute tutorial section at the beginning of the game. Then you hit the meat of the title, and you die. And you die. And you die again. And again. And suddenly the thought hits you, “Oh no, I might not be able to do this. I might not be able to beat this game.”

That moment came for me during Skully’s second level. There was a simple series of jumps, just a minor thing really. Jump out over the water, bounce on three pillars. Turn the camera. Hop to five more pillars and you are safe, back on dry land. This small section took me around 90 minutes; I rolled off of these pillars and died at least forty times. And that’s when I realized. This is level two, out of God knows how many levels. I might not be able to beat Skully.

Skully Has A Fully Developed World and Story

A surprising amount of work clearly went into developing Skully’s world and characters. All of the connective tissue in the game (story, design, artwork, music) is top-notch. At the beginning of the game, Skully is created by a chummy guy named Terry (who is voiced fantastically by an actor doing a very passable Chris Pratt). Terry takes a glob of mud, stuffs it in a skull, and our rolling hero is born. Of course, Skully is a skull, so he is capable of rolling around independently, exploring the interesting world in which he finds himself.

Though it isn’t revealed immediately, eventually the player learns that Terry is one of four siblings. While Terry is the lord of mud (earth, in other words), each of his siblings has a domain over which they rule (water, air, and fire). Terry is on a somewhat unclear mission to go visit his siblings in order to…I don’t know…put them in a bag or something. Whatever Terry is trying to do, his siblings aren’t too cool with his plan, and they resist him at every turn. This makes things tough for Skully, who is basically tasked with doing Terry’s bidding.

But because Skully is mud-powered, he must avoid anything that would knock any mud from his skull. Water is a big no-no, which makes some aqua-based enemies that show up pretty early in the game very dangerous. In a neat visual touch, taking hits (or hitting the water) causes the mud ball powering Skully to visibly shrink. Once it is gone, Skully is dead, and the player must start over at the last checkpoint they touched.

Each of the siblings’ worlds poses a threat to Skully, as he is uniquely vulnerable to each of their areas of speciality. In addition to being quickly destroyed by falling into the water, air and fire can also knock the mud from Skully in the blink of an eye. Skully rolls, so the wind is pretty awful to contend with. And of course, skulls burn, so fire and lava are not so great.

Luckily, checkpoints are generously scattered about Skully’s world. A fair amount of Skully’s gameplay is spent trying to claw your way to the next checkpoint, at which point you issue a sigh of relief, basking in the knowledge that you will never have to do that again.

Skully Gets Some Extra Powers – And Some Relief

Fairly early in the game, Skully gets the ability to create a mud-body for himself. This provides a bit of relief for the player, as having a body allows for some more traditional platforming. Sections of the game that can be completed with a body feel like an absolute breeze after a few levels spent rolling around (and dying constantly).

Skully’s first body (which I came to think of as “Strong Guy”) is able to clobber down doors and obstacles, and also fire a ground attack that temporarily takes down the water-based blobs that dot the landscape. This is awesome, but before long Skully adds a few more bodies to his repertoire. “Jumpy Guy” allows Skully to do a double jump, and “Fast Guy” lets Skully run super-fast, clearing long jumps that even Jumpy Guy would never get past.

Jumpy Guy and Fast Guy also have the ability to move platforms with psychic powers. Skully can create bodies at any checkpoint and he can have up to three bodies active at one time, switching between them on the fly. For example, Skully might hop into Fast Guy, and move a platform into position. Then he can hop of out Fast Guy, leaving him there holding the platform in place and go jump into Jumpy Guy to make the leap.

A lot of Skully’s later game is spent examining the challenging scene laid out before you and determining which guy (or combination of guys) will be required to get past it. These sections have a nice steady increase in difficulty as the game progresses, and the puzzles are well thought out. There’s often more than one way to proceed, leaving the player with a feeling of agency and satisfaction.

Of course, for every cool puzzle, there is a section of blistering difficulty where you accidentally roll Skully off a cliff fifty times. The disparity in difficulty between the bodies and the skull character can be jarring, leaving the flow of the game feeling slightly disjointed.

Look, I’m no platforming expert, but I’m not a total chump either. I beat the first four Crash Bandicoot games. Mario and I have rescued Princess Peach a few times. I sat like a lump in my friend’s room in our college dormitory until I was able to beat Mega Man 3. Yeah, I admit that I’m a little rusty, but not so out of practice that I expected to get stumped so badly by Skully. But players be warned, Skully can be ludicrously tough.

Skully (the character, not the game) rolls. He rolls like a marble – right off of edges. He rolls down inclines. When you land him squarely in the middle of a platform with a perfectly placed jump, he rolls right off and dies. Some dicey camera angles only add to the frustration. To say that Skully sometimes has difficulty spikes would kind of be like saying that it snows sometimes in Antarctica. This entire game is one constant shotgun blast of difficulty spikes to the face. And it burned my soul.

That said, there is a lot to enjoy in Skully. The world design and characters are a lot of fun. And there is satisfaction in being able to overcome some of Skully’s more difficult areas. Not to mention, it will be a ton of fun to watch streamers screaming into their microphones as they drop Skully off a cliff for the fifteenth time. And I’m sure some mutant speedrunner will eventually blow my mind by whipping through this game in ten minutes. I can’t wait to see it, frankly.

There is an audience out there for games as difficult as Skully. And while playing the game, I had to wonder if the developers realized just how hard this game really is. The fact that you can breeze through large sections with the mud-guys, only to be stopped cold by a “rolling Skully” section made me think that maybe the people making the game at Finish Line Games were simply accustomed to the movement of the skull and thought that they were making a fun little platformer. They were victims of Skully Stockholm Syndrome.

To be fair, I did eventually get better at Skully. I was able to struggle through to the end (with some help from my son, who got sick of hearing me yell, seized the controller, and got me past one particular lava area that had me stumped for two days). Overcoming the challenges of this game will likely be very satisfying to a large segment of the gaming community. But don’t make the mistake that I made, thinking that this would be a simple jog through a fun world. Skully is gonna hurt you.

Skully is now available on the PlayStation Store.

Don’t be fooled by the nice-looking world, fun characters, or interesting story. Skully is a clever game with fun puzzles, and some of the most blisteringly difficult 3D platforming I’ve encountered in years. Be ready to challenge yourself as difficulty spikes put you in a blender and spit you back out. Skully is fun, satisfying and well-made, but not for the faint of heart.