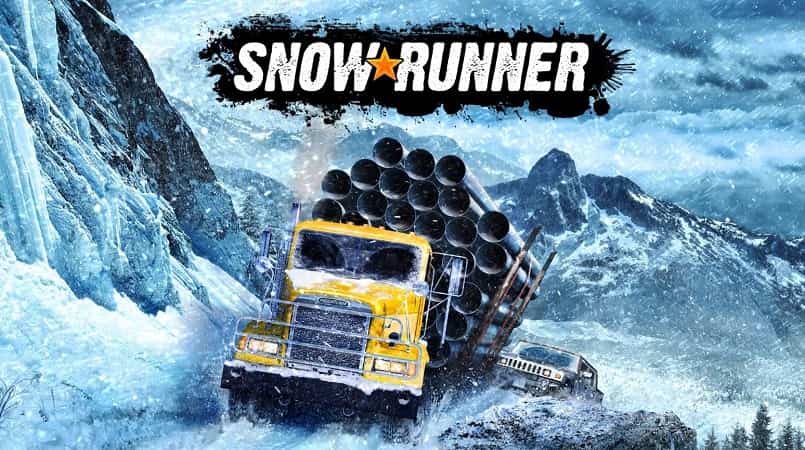 One of the most fascinating things about the Spintires MudRunner games was just how well through them developer Sabre Interactive managed to encapsulate the three way struggle between man, machine and nature. That compelling and almost timeless conflict returns in the latest title, Snow Runner, which not only comfortably expands the scope of the series rough and tumble affair with big vehicles hefting big cargo across treacherous terrain, but also manages to expunge many of the frustrations that plagued the series previous outing.

Just to be clear, if you’ve never played MudRunner on PlayStation 4 or any of the other Spintires games on PC, you’ll be in for something of a shock when you pick up the pad and kick Snow Runner into gear.

As far away from a white-knuckle arcade style title as you can possibly get, Snow Runner instead slows everything down to an almost literal crawl and shines the light on bigger vehicles and the key role they play in the economy. If that sounds boring to you, I’d still suggest that you keep reading, not least because the level of satisfaction that it dishes out to the player on the regular is both rewardingly hard won and hugely welcome.

Like many of the best things in life, Snow Runner’s appeal is simple to grasp and also deceptively deep. Put in control of a variety of hulking service vehicles such as large vans, trucks, 12-wheelers and much more besides, the goal often in Snow Runner is to transport cargo from one location to another in order to facilitate an economic project of some sort (the loading screens are stuffed with odd factoids about the real-life role that big vehicles play in the US economy), such as building a bridge or fashioning some other type of key infrastructure.

Where the figurative sting in the tail comes into play is in physics heavy handling model that SnowR unner employs and more importantly, how that model is affected by any number of plausible factors.

At a basic level, every vehicles handles differently – but that handling is directly affected by the power to weight ratio that is unique for each mode of transport. While a regular, responsive car can be thrown around corners with relative reckless abandon, a much larger truck will not and it’s here that you can really feel the weight of this massive metal beast as it grinds itself around bends in an almost uncomfortably large turning circle. Likewise, a sports car might look nice, but if you’re taking it through a muddy bog or a flooded road, you’re going to get stuck, and get stuck quickly.

Then there’s the terrain which must always be considered too. The richly detailed and dynamically deformative environments that Snow Runner boasts aren’t just for show, as they encompass all sorts of natural features that can directly affect your journey. Deep muddy bogs can grind you to a halt, while even gentle looking rocky outcroppings can result in you (and your cargo) taking a painfully catastrophic spill when you least expect.

The weather can directly affect all this too. Between the three different regions of Michigan, Alaska and Taymyr, you’ll find that mother nature will often do her utmost to ensure that you’re stymied in your work. Rainstorms can turn previously dry mud tracks into thick, grinding quagmires and flooded fords, while snow, ice and more can also all make your journey extremely hazardous to say the least. Even the more subtle weather systems can wreak havoc on you progress too, as low lying mist can disguise potential hazards for example.

It’s here though, in the face of this three point challenge betwixt man, vehicle and nature that Snow Runner really shines. The feeling of satisfaction that you get from enabling a truck’s four wheel drive mode and grinding your way through a muddy dip, or using a winch from one vehicle to pull another one out of trouble is both unexpectedly palpable and hugely satisfying indeed.

Beyond the regular mission to mission activity of delivering stuff from A to B, Snow Runner gives players plenty of other stuff to do too. While its open world template is hardly revolutionary (discovering towers will unlock new points of interest in the environment in the same way that you’ve seen in seemingly every Ubisoft title ever), collecting upgrades which can be used for each of Snow Runner’s 40 or so vehicles proves to be a thrill, not least because they all appear to be stashed highly dangerous locations that require every ounce of your grit and driving skill to safely reach.

Sitting above everything you do in Snow Runner is a progression system that rewards you with new vehicles for each driver rank that you achieve. Driver ranks are obtained in something resembling true RPG fashion, as you gain XP for discovering upgrades, completing missions and discovering new locations. Progression in Snow Runner is hardly revolutionary stuff then, but it remains somewhat compelling all the same.

Then there’s the co-operative mode that Snow Runner provides. Supporting up to four players, Snow Runner’s co-operative online gameplay is very much a drop-in, drop-out sort of affair where other players can essentially hop into each other campaigns and help each other out. Though nothing groundbreaking, there’s an odd sense of camaraderie in Snow Runner’s co-operative jaunts, as players help one another out of sticky situations while joining with each other in the spirit of discovering all manner of secrets from within the depths of each of the game’s three main regions.

Elsewhere, Snow Runner boasts an 18-wheeler sized number of improvements over its predecessors, too. Whether its the new and unique cockpit views for each of the vehicles, a much more intuitive UI that makes loading cargo simple and straightforward (you no longer have to manually winch it aboard your vehicle if you don’t want to), or a massively improved tutorial that effortlessly and enjoyably shows you everything you need to know, Snow Runner is arguably the pinnacle of the series to date.

That said, Snow Runner does still suffer from one issue in particular that proves especially aggravating. Should your vehicle become unrecoverable, the recover command forces you back to the start the point for that vehicle, rather than the last visited observation tower for example. As you can probably guess, this can make the game almost unbearably tense at times because one critical mistake can often set you back a long way.

Like Mud Runner before it then, Snow Runner’s grinding, slow-paced gameplay will sadly struggle in its appeal to a broad swathe of folks looking for more instantly gratifying, high-octane thrills. However, and this remains truer more now than ever before, those who take a chance on Snow Runner will discover a gritty driving simulator that deftly matches its attention to detail with the satisfaction that it doles out to players who are eager to get behind the wheel of its thunderous metal machines.

Simultaneously a big leap over the MudRunner titles and a compelling effort in its own right, SnowRunner's improved focus on the hard fought conflict between man, machine and nature results in a highly rewarding and satisfying driving simulator that is quite unlike anything else.