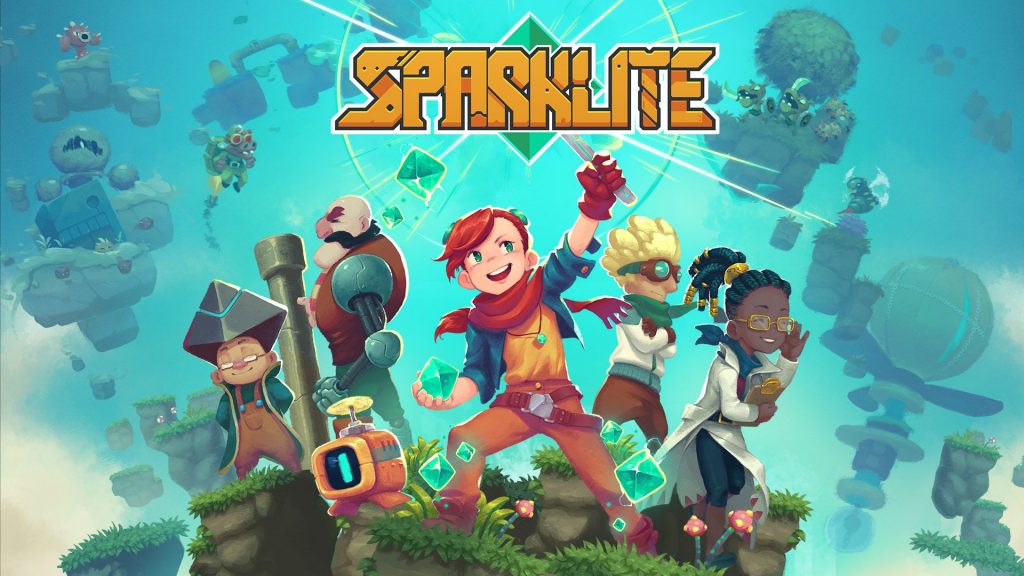 Sparklite is a charming little adventure game drawing inspiration from titles like The Legend of Zelda: A Link to the Past. Red Blue Games tries hard to create something special in Sparklite and succeeds to a certain extent. Unfortunately, its shortcomings hold it back from reaching the same heights as the titles it grabs inspiration from.

Sparklite takes place in Geodia, a land being torn apart by the Barion. The Barion digs through the earth searching for a rare mineral called Sparklite. In doing so, The Barion is tearing the world apart and the last few remaining humans take refuge on a small floating blimp. Ada, a young mechanic takes it upon herself to stop The Barion and return Geodia to its once prospering state.

Geodia has a unique self-defending core, using it to hinder The Barron’s mining efforts by rearranging the world. This means that every time Ada steps foot on Geodia the layout is always different. That’s right, the world of Sparklite is procedurally generated and unfortunately, that’s what hurts Sparklite the most.

The procedurally generated world is a neat idea that has been done elsewhere before, in this game but it doesn’t work as well as it should. As I progressed through Sparklite, I found it harder and harder to justify the procedurally generated world. The biggest problem is that health is almost impossible to find out in the field.so every time I am killed I have to return to a brand new world and search for my destination from scratch.

The world of Geodia is spread across five distinct regions. From snowy mountains to deserts, each region features four distinct locations to visit and a dungeon for you to explore where you will gain a blueprint to craft a new Gadget. These regions also feature an enemy stronghold which once completed will drop a patch that you can equip to upgrade Ada, a pirate tent where you can select one of three chests for major Sparklite currency, and finally the boss encounter. Once a boss encounter is completed, you’ll acquire an ability to progress to the next locked region in Geodia.

There are maps you can acquire and equip to reveal the game world, but it has to be obtained first, and it takes up precious space on your patch board. The patch board is where you’ll equip patches that will upgrade Ada and her abilities. These patches range from increasing Ada’s maximum health, increasing the damage she does with her Gadgets, and revealing certain locations on the map like a gadget dungeon or the boss location.

Each patch takes up a certain amount of space on the 3×3 board so you must figure out which ones is best suited for your play style. Thankfully, you can upgrade the board to fit more patches and even fuse patches of the same type to give them a better rank and quality. Health patches come with a quarter heart – if you combine two heart patches, it will give you half a heart and you can upgrade that to a full heart and so on.

It’s a good system but there was a problem when reaching the endgame as I was forced to grind for as many hearts as possible. The worst part about this system is that patch drops are random. I found myself in desperate need of finding a shield patch to increase my defense so I wouldn’t get killed in the later portions of the game from being hit less than four times by these powerful boss enemies.

Combat in Sparklite is simple but satisfying. Using the gadgets can take some getting used to as you have to aim and charge most of them which leave you open to attack. Ada uses a wrench for her melee attacks and I found this to be the most effective method to deal with every enemy I fought. Sparklite is also a very smooth running title, and I never had trouble with anything I was doing from a performance perspective. Having to dodge attacks instead of simply having the ability to block them was a bad decision as I died a lot of times because I dodged right into an upcoming attack that couldn’t be predicted or avoided.

The pixel art is gorgeous, which is something I’ve been saying about a lot about indie titles these days. It’s so good that I can pretty much say at this point that indie developers have mastered pixel art and animation and it shows in Sparklite.

Sparklite is a good game that takes inspiration from some amazing titles. Unfortunately, trying to innovate on those inspirations doesn’t always work out. The procedurally generated world is fun to explore at first but quickly starts to drag down the experience in the latter half of the game. It’s also a shame that most of my failings in the game came because there wasn’t any health for me to find on Geodia.

Sparklite is out now on PS4, PC, Xbox One and Nintendo Switch.

Sparklite is a fun title that is born from a wealth of classic influences. However, it may test the patience of players in the latter half of the game due to it's procedurally generated world and crazy difficulty spikes that force you to grind as much as possible just to give yourself the smallest of advantages.