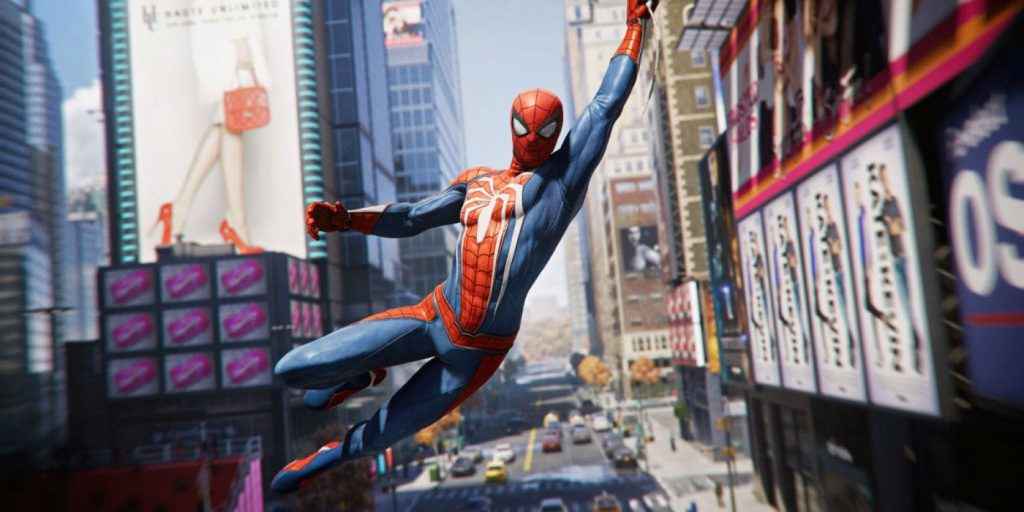 With their great stories, evocative gameplay and kinship to the source material, the Neversoft developed Spider-Man games that were released on PSOne some 18 years ago have long held a fond place in the hearts of PlayStation gamers around the world.

Now in 2018, not only have those beloved first generation PlayStation classics been thoroughly surpassed by a new Spider-Man, but in the process Insomniac Games have given PS4 owners one of the greatest console exclusives seen to date.

By the far the biggest thing that Insomniac Games gets right is that you just feel like titular web-slinger. As the accompanying violin and string arrangement hits an ear-ringing crescendo as you gracefully leap and twist through the air in a peerless display of aerial ballet that looks like it could have sprung from the silver screen – you simply feel like Spider-Man in a way that just hasn’t been possible until now.

Much as the Arkham games made you feel like you were Batman, Spider-Man goes further by not only making you feel every inch like the heroic web-slinger, but also his distinctly less glamorous alter ego too who with his unpaid bills, messy apartment and disorderly lifestyle is one side of the coin we can all perhaps relate a little too closely to.

Spider-Man actively relishes in the fact that you aren’t Spider-Man all the time. Whereas previous superhero titles (Telltale’s Batman efforts notwithstanding) have largely cast you as the hero with little regard for the human being that lurks underneath, Insomniac have ensured that both Peter Parker and Spider-Man are entwined and threaded through the entire story – much as the comics themselves have largely succeeded to do.

Clearly, Insomniac are keen for players to engage with the humanity of Spider-Man rather than just the spectacle of his superhero driven escapades. As an older, more experienced Spider-Man, Insomniac’s story shows us a New York City where many of his super-villain foes are either incarcerated, or reformed in some way but more importantly, its winding, well-designed story is nothing less than furiously entertaining.

More than that there is a charming, earnest quality to the story and the cast of characters that lend weight to its bearing – a welcome reprieve from the acerbic grimdark of the Arkham games. Nowhere is this better embodied than in Spider-Man himself; with his constant wise-cracks, witty quips and unrelenting humor, it’s surprising how much it adds to the affair.

All the same, that isn’t to suggest that Spider-Man is all flowers and rainbow colored arachnids throughout – it isn’t, and the emotional resonance of scenes of real tragedy and loss is magnified all the more by the fact that the game largely embraces a lighter tone throughout. Additionally, the fact that the story has been officially canonized by Marvel itself also lends the proceedings a sense of gravitas that it might not have had in the event that the story was orphaned, too.

Controlling Spider-Man is nothing less than pure, euphoric joy and this is grandly evidenced in how players traverse through Insomniac’s luxurious depiction of New York City. By simply holding down the R2 button and pressing in a direction, players can find themselves effortlessly pulling off Spider-Man’s trademark web gymnastics as he swings down streets, twists himself around buildings, runs up/along walls and can even zip forward with a quick press of the X button, too.

Beyond such feats, Spider-Man can also stick himself to walls and ceilings, while co-opting his web shooters to pull him towards ledges and other surfaces with great speed. There’s nothing quite like diving a quarter mile off of the tallest building you can find before pulling up at the last moment and shooting a web to massively accelerate yourself as the lively hustle and bustle of New York’s crushing rush hour soars beneath.

Elsewhere, combat is also utterly sublime and greatly satisfying. Largely accommodated by presses of the square button that can easily chain into combos of punches, kicks, flipkicks and throws, Spider-Man’s combat liberally invokes memories of Rocksteady’s Arkham games – however Mr. Parker’s hyper-agility and blistering speed lends a frenetic and wholly satisfying violence to each and every encounter.

Certainly, whereas the Arkham games are largely predicated on a generous countering system in which players can easily wreck crowds of bad dudes with supreme ease, Spider-Man’s removal of the counter button prompts a different kind of combat competence on the part of the player. This is also represented by Peter Parker’s Spider-Sense – a color coded alert that appears over his head when danger is imminent, this mechanic allows him to dodge fists, feet and even rockets and bullets with ease and when factored into the combat itself always makes you feel resolutely capable rather than just a listless counter-machine.

The use of focus is another unique feature of Spider-Man’s combat as well, because as you land hits on your enemies, your focus bar fills up and can be expended to restore Spider-Man’s health or unleash a brutal finishing move upon the foe closest to him. As a result, combat in Spider-Man becomes more pleasingly tactical than you might think at first – do you use your focus to keep your health topped up, or, do you use it to expend a finishing move on a dangerous, rocket-launcher toting foe?

Ultimately, though there is no counter button, combat in Spider-Man still enables the player to be endlessly creative as Spider-Man can use various gadgets to crowd control his enemies – webbing them against walls and blasting them off buildings and even throw just about any item in the general vicinity at his foes. With a variety of different bad dudes to scrap with including standard melee enemies, ranged enemies with guns, grenades, rocket launchers and brutes and each requiring their own strategy to beat, combat in Spider-Man is never anything less than thrilling compelling and endlessly creative.

One look at Spider-Man’s open-world map and you’d be forgiven for thinking that Ubisoft has had a hand in its development – so stuffed with activity icons does it become by the end of the game. Further familiar is the manner in which Spider-Man unfurls these side-missions and activities. By descrambling radio towers, players will have access to a wide range of additional side missions and other such content for the area in which the tower resides – taking pages from the Ubisoft open world playbook in the process.

Pointedly, while such side activities can be dull and menial in series like Watch Dogs and Assassin’s Creed, in Spider-Man they are not only varied and entertaining, but also deeply rooted into the progression system too. Broadly speaking, completing missions and side activities provides XP that can be put into one of three skill trees – innovator (crowd control and pacification abilities), defender (combat based abilities) and web-slinger (agility based abilities).

Where the side-missions differ from their core equivalents however, is in how they award very specific tokens that can be used to not only craft a variety of gadgets for the masked web-crawler, but also whole new Spider-suits too. Speaking of suits, each one possesses various buffs that can prop up your stats – offering additional focus, extra XP for defeating enemies and so on. More crucially though, is the fact that each suit has its own special suit power to help you even the odds, ranging from a regenerative function that restores your focus to a web explosion that has Spidey leaping into the air and webbing everything in sight.

What is quite remarkable about these side missions (some of which are rather sizable indeed) and activities is that they figure directly into both Spider-Man’s character as a hero and also the photojournalist and scientific purists of Peter Parker as well. On the one hand, the various research activities draw from his scientific background – tasking him with completing various environmental projects to improve the state of his beloved city, while Peter’s trusty camera can be used to complete special missions; requiring him to take snapshots of historical buildings and key locations around New York City.

Given its time in the sun as one of the four PS4 exclusives that wowed onlookers at E3 2018, we already knew ahead of time that Insomniac’s Spider-Man was going to be quite the looker. What wasn’t obvious at the time was the fact that across its nearly 40 hour (including optional stuff) duration, that Spider-Man would uphold such lofty visual caliber throughout.


The visuals have been crafted to such a standard, that if you stripped Spider-Man of all of its UI elements, it could conceivably and plausibly pass as a CG movie. From hugely detailed character models, to a supremely stable frame-rate, great HDR implementation and some absolutely sterling texture work – Spider-Man looks simply astounding.

The character model detail is such that we are now looking at properly captured digital actor performances where the smallest facial expression and the most subtle mannerism can combine to create a truly dramatic performance – something that all the main characters in the game frequently demonstrate. The advent of modern technology and much beefier console architecture also means that when Spider-Man hits street level, his surroundings still look ultra-detailed too, with swathes of dumbstruck pedestrians calling his name while the hustle and bustle of Insomniac’s digital Big Apple unfurls around him.

Speaking of the Big Apple, developer Insomniac has done the sprawling city ample justice, fashioning a deliciously detailed and reassuringly large open-world that invites exploration as players are encouraged to check out all manner of real-life landmarks all the while touching base with notable locations taken straight from Marvel lore.

Further afield, the city-smashing boss fights serve to underscore the quality of Spider-Man’s yet further still, their cinematic choreography and bone-crunching encounters firmly securing Insomniac’s latest as one of the most cinematic titles you can get on PS4.

Spider-Man Is The Superhero Blockbuster Of The Year

Though some aspects of its open-world framework might prove overly familiar and even though Spider-Man hardly reinvents the latter template, it does manage to surpass the PS1 golden era of Spider-Man games, giving us a rollicking open-world adventure steeped in a great Marvel story and providing us with a rock solid Game of the Year candidate in the process.

With more references and nods to the wider Marvel universe than you can fill an XXXXL size Infinity Gauntlet with, Spider-Man is as much a loving example of fan-service as it is a downright fantastic game in its own right.

More than just the next first-party blockbuster from the house that PlayStation built, Spider-Man is at the vanguard of the PS4’s twilight offerings – a demonstrable and emphatic indicator that the best really is yet to come. In the end, Spider-Man is just doing whatever a spider can and as it turns out, that’s more than we could ever have hoped – the PS4 superhero renaissance begins anew.

Spider-Man from Insomniac Games will be available exclusively for PS4 on September 7, 2018.

A welcome return for PlayStation's original superhero icon, Insomniac Games have not just given us another sublime PlayStation exclusive but also the best superhero blockbuster the PS4 has ever seen. Spider-Man is a thunderous, essential triumph that bleeds cinematic splendor from every digital pore. Every PS4 owner needs to have Spider-Man in their collection.