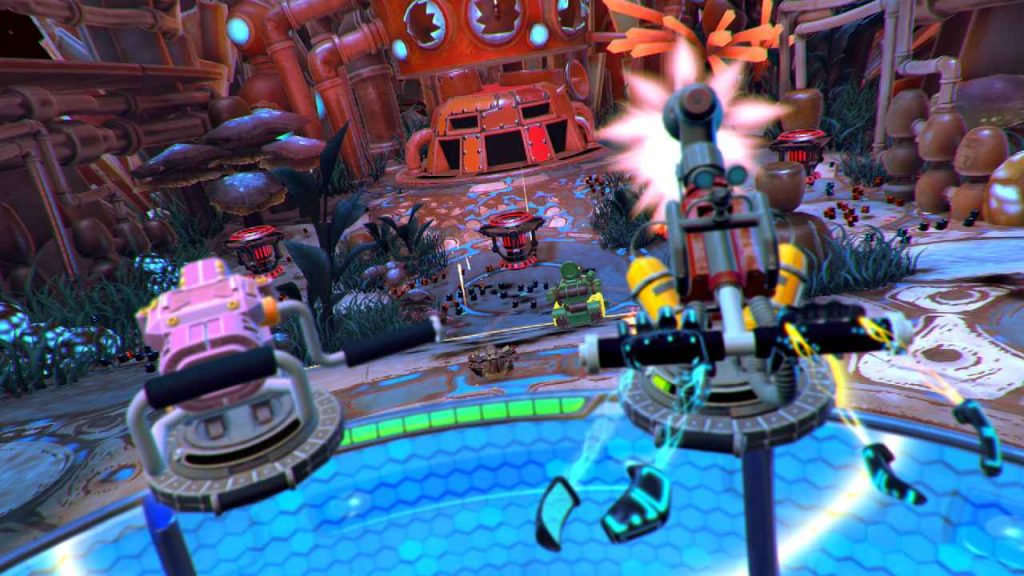 Spuds Unearthed, soon to arrive on the PlayStation Store from Polish development team Gamedust, feels like two-thirds of an extremely cool game. Many of the elements for a successful VR game are there. Cool design, fun characters, an interesting battle system – all are present an accounted for. But the connective tissue that holds these aspects together, the stuff that makes a game a game, is flimsy at best.

Spuds Unearthed starts out as deeply confusing (bordering on incomprehensible), but once you get your head around what is going on, the realization sets in that the game’s complexity was all smoke and mirrors. The surface complications do not add up to a deep and satisfying game. While some of the minute to minute gameplay is entertaining, Spuds Unearthed leaves players with very little to grasp onto in order to summon the will to keep playing. There is simply no motivation to continue.

Ahhh! What Is Going On Here?

Spuds Unearthed begins with the player into their home base – a factory of sorts with a bunch of devices, where you can adjust your loadout and develop hero characters, changing their powers with tokens.

If you are now asking, “Wait. What loadout? What hero characters? What kind of powers do they have? What are tokens? Why are we in a factory?”, well, that’s exactly my point. With no context whatsoever, the game presents the player with a series of static “tutorial” slides, which vaguely explain the basic control scheme, and give a very base-level overview of some of the devices at your disposal. For an interface this complex, it is nowhere near sufficient.

So, let me give you some context. You play as the representative/overlord/general of a planet of good potatoes. For whatever reasons that motivate potato conflicts, you are locked in an interplanetary battle with bad potatoes – known as the “Zombuds”. You travel to various planets to do battle with the Zombuds in MOBA-lite-style battles.

The Battle System In Spuds Unearthed Is Pretty Good

When you enter battle, you are placed within your defensive structure, facing out towards three lanes. You have an endless supply of minions – little cubes that periodically emerge from you structure and march forward to defeat the enemy.

To combat them, the enemy sends Zombuds into the field. One Zombud can obliterate scores of minions, and they come sliding down the lanes at a fairly steady clip, so it is up to you to clear a path for your little combatants.

You have two turrets at your disposal, which have various settings that you can earn by defeating enemies and receiving tokens. At first, you start with crank-style machine guns. You grasp the mounted gun with one hand and crank a handle with the other to shoot.

Even with no supplemental changes, these turrets are fairly adept as chewing through Zombuds. But before long, you earn different ammunition, as well as different firing mechanisms. You are encouraged to mix and match – but be warned – results vary greatly.

You also have a few “hero” potato units. You start with just one, but you will eventually unlock a small army – though you can only select three at a time to take with you to battle. These guys have various powers that are activated by picking them up and throwing them onto the battlefield. For example, one has a rocket launcher that starts firing at enemies that wander into range. Another is a pilot, who spawns a plane when he’s tossed out, and starts swooping around, strafing enemies.

These guys are also upgraded by earning tokens. Tokens are earned by taking on certain battles. You can also earn additional heroes by freeing captive potatoes – a counter in your base keeps track of how many you have freed. Freeing captives is as simple as winning battles; each battle is worth a certain number, and winning automatically causes your counter to go up.

So basically, your minions go to work on each lane, while you clear a path for them with the turrets and toss heroes onto the field for the (limited) help they offer. Eventually, the enemy will be overrun, and you will collect captive potatoes and the occasional token.

Everybody still with me?

How Does All This Stuff Work?

Your home base serves as a glorified menu of sorts, allowing you to adjust the ammo and firing mechanism of your turrets. You simply lift up on them and adjust a couple of levers to choose the options you want. When you earn a new token with an ammo or firing type, simply drop it into the slot in front of you and the option will be added to the levers. But I should note, it took me forever to figure this functionality out. Spuds Unearthed does not explain.

Even more fumble-worthy is the machine off to the player’s right – the one that changes hero potatoes’ powers. Honestly, I still don’t have 100% clarity on how it works. You set the potato on the little stand, and then you put the token into the slot, and pull a lever. I think. Sometimes it works, but sometimes the token just disappears, and nothing happens. Like a lot of Spuds Unearthed, your guess is as good as mine.

Once you have all of that settled (or you ust get frustrated and give up), place your hand in a scanner and you will be transported to another interface that allows you to choose your battles. You will see a dozen or so planets floating in front of you. Simply grab one and stick it in the scanner in front of you to check the battle details. Bigger planets represent more difficult battles, smaller planets are pushovers. Click a button, and its off to that planet to do battle.

Why Am I Doing ANY Of This?

It is within this planet/battle selection mechanism that a lot of Spuds Unearthed began to break down for me. There is some weird stuff going on here involving asynchronous multiplayer, and it makes zero sense. Sometimes, among the other planets, you will see planets already claimed by other players. You can choose to attack, which puts you in a fight with that other player’s turrets and hero spuds for control of the planet.

These asynchronous battles are some of the most difficult in the game, but I had little to no understanding of the point. I don’t know if other players are ever informed when you take over one of their planets. And the effort involved in doing so seemed hardly worth the effort involved.

One time, I picked a planet that I already had control over, and was informed that it was “under attack”, but I have little understanding of what that means. I wasn’t able to go to battle to defend it, so I just put it back and picked another. Shrug.

There were other times where I saw planets controlled by other players, but I was strangely not able to grab them to start a battle – my hand just went right through them. Why show these player-controlled planets if I cannot do anything? And occasionally, a warp-hole will appear and offer to move you to another solar system, but it was so inconsistent, I had a hard time understanding when and why it would appear.

After getting frustrated with the opacity of these systems, I began to become disillusioned with other aspects of Spuds Unearthed. The mechanic for throwing your heroes into the field of battle is wildly inconsistent – making me think that an aiming reticle that appeared on the ground would have been a much better solution. And the turrets are also fairly buggy, sometimes refusing to fire for reasons unknown.

And then there was the matter of progression, and the lack of reasons for it. I was able to defeat the most difficult battles in the game using the base crank-turrets and one hero spud. Why would I continue to work to upgrade this stuff, when the stuff I had was good enough? And what was the point of continuing on? Would anything ever really happen?

With no story to speak of, an opaque multiplayer component, and a lack of motivation to continue forward, I eventually just sat my Move Controllers down and moved away from Spuds Unearthed. I just didn’t understand the point of any of it.

Spuds Unearthed has a very complicated interface that – for a time – masks the very simple game beneath it. But once you peel back the layers of complexity, you are left with something as formless and nebulous as a raw potato. While the potential is there for a compelling game, I’m afraid that this potato needed to be cooked a little longer if it were going to end up as anything tasty.

Spuds Unearthed is available on the PlayStation Store.

Spuds Unearthed has a lot of cool elements, but they unfortunately don’t add up to a very compelling game. Plagued by overly complex interface elements and a very flimsy structure, the core gameplay just isn’t interesting enough to keep players coming back for more.