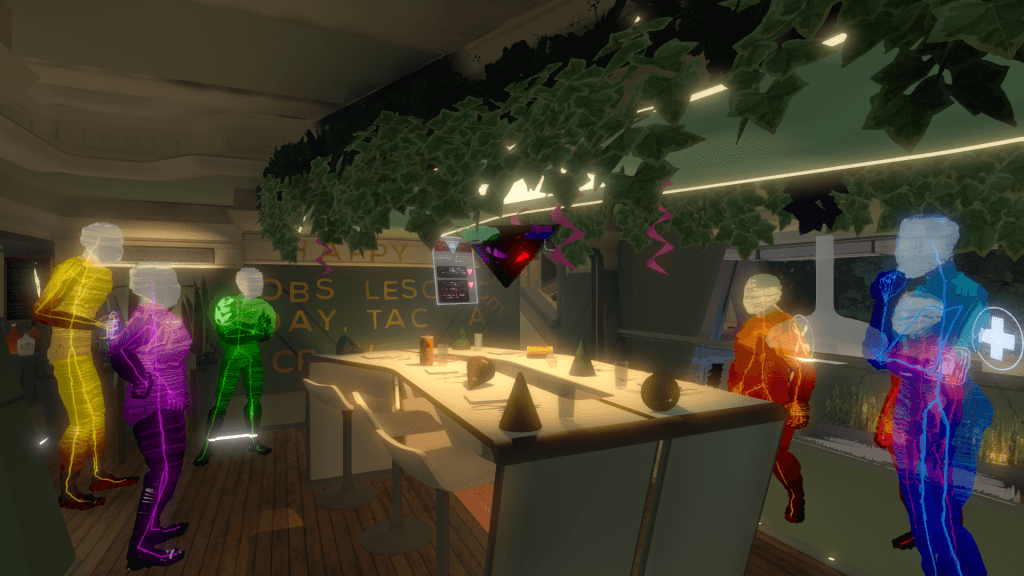 The way that Tacoma begins is clouded. You are onboard a space shuttle on your way to a base with little understanding of what's going on. Throughout Tacoma, you learn the basis of your mission, and you record as much information as you can before handing what you've collected to your superiors. What happens along the way is what makes Tacoma special, because getting to the heart and soul of human beings is what makes us special in the first place: We are aware of ourselves and each other, and Fullbright has created something special in that light.

As mentioned above, the premise of the game is very simple. In fact, the game is quite linear, opening up different sections of the station as you finish with the section you're in. Little secrets are hidden around, waiting for you to find them, with the only motivation being your curiosity. Each room has its lived-in feel as well, whether the room is an administration office or a personal quarters.

As a sort of guide, the AI Odin vicariously delivers little snippets of time, showcasing how the six agency workers interacted and lived. From all walks of life, they have their own nuances, but the narrative strength comes through its delivery. Every person is represented by a digitized avatar, each associated with a color that embodies their basic shape, that has no specific features. You're then given control of a scene, allowed to freely rewind and pause at any time. That way, you can go back and replay the events at your leisure. Little nuggets of information can be found on each person as well. Big desktop displays appear from time to time, displaying messages between crew persons, family members, and fellow employees back on Earth. It's between these inbox messages and replayable scenes that the crew comes to life.

The map itself is quite small, but it's wonderfully intricate and caring in its details. You'll find a garden with personal shrines, notepads with doodles, and even a lost wedding ring. It was in the first few minutes of firing up Tacoma that my first connection was made. A semi-unlikeable, rather stringent administrator had delivered somber news to the crew before returning to her quarters, where she played her guitar. The song was melancholic and heavy, and while listening I scoped out her room. On her bunk, overlooking the vast expanse of space, sat a copy of Sylvia Plath's The Bell Jar. Fullbright made sure you had just enough to spark an understanding for each member. There were details like these everywhere in the station that were subtle, lying in wait for a connection.

Being a narratively heavy experience, there's inevitably little conversation to be had regarding the gameplay. Controls are heavy but intuitive, and they never get in your way. I had a few times where the game would stutter while on the lift to different sections of the station, and I even had one time where the game completely crashed on me, but these issues tended to show up when I would look up and down the shaft as it traveled. Either way, the problem is there.

While there is a lot of narrative weigh scattered around the station, the story leaves a lot of different ideas and narratives kind of hanging. There's an overarching theme to it all, but I'd much rather hear more about the characters. Please don't misunderstand me. There is a special experience here. It comes not only in the subject matter it handles but also in how that information is delivered. Regardless, by the end, there is an overarching feeling that a lot was left unsaid. This arguably is the point, with loss being a common factor. A lot of things start beautifully in Tacoma, but there is very little closure.

On a gameplay level, there's little to do after the credits roll. You spend some time running around the entire station at a certain point, but apart from a few Easter Eggs and extra Trophies, replayability is at a minimum. In fact, I had the Platinum squared away after about four hours without really pacing myself.

The score I give Tacoma is something I put on that rating fence intentionally. It has a lot there, but it won't hand very much of the experience to you on a silver platter. You have to find it, and finding that experience for yourself is what makes it special. Tacoma has me thinking about a lot of things now that I'm done, but there's that narrow shadow of disappointment of what could have been that comes along with it.

Tacoma is available to buy from the PlayStation Store from May 8, 2018.

Tacoma has a heart all its own, exploring a myriad of themes and advocating for the human condition, but the branches that sprout from the tree rarely bear fruit. Still, the growth is wonderful, even without that sweet taste you so long for.