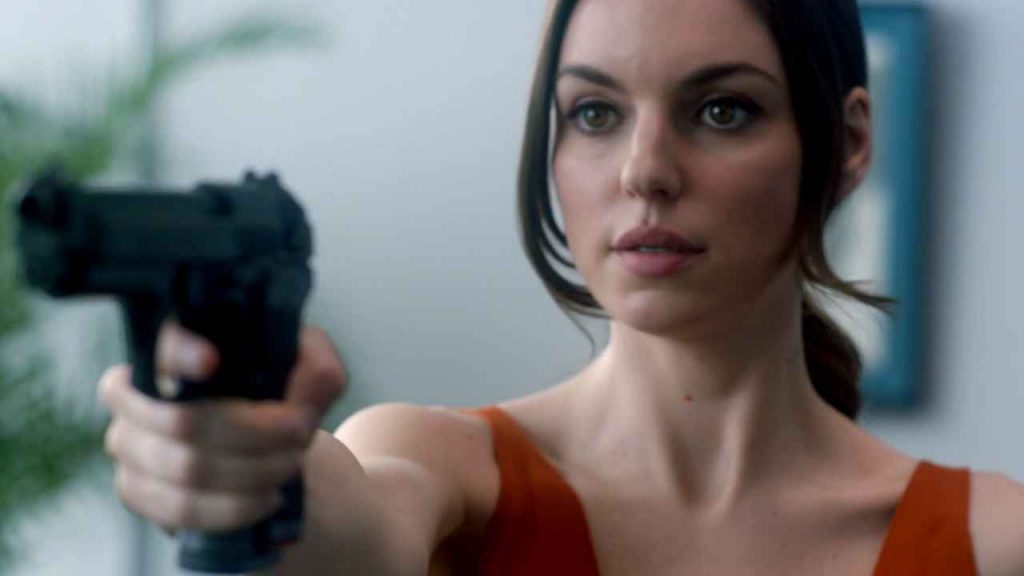 It is fairly impossible to spoil The Complex. This new interactive movie, playable on PlayStation 4, has a fairly boilerplate plot, and you will likely know where the majority of the film is going – right up to the end. That’s because The Complex has eight or nine different endings, depending on the choices you make throughout its runtime, though very few of them feel earned by your choices.

I’ve played enough of The Complex to see three of its endings, primarily because the first two I saw were so unsatisfying that I was determined to play through in such a way that I killed every damn character in the game. Mission accomplished.

Look, I’m not going to mince words here. Anyone coming to The Complex for a cinematic experience is going to be wildly disappointed. Do you remember those Sci-Fi Channel films from the 90s, where the producers saved on the budget by filming the entire thing against a green screen, adding mediocre digital effects to the background in post?

Well, The Complex isn’t quite that bad visually – most of the actual sets are decent enough – but when those green screen effects rear their head, you will certainly be reminded of direct-to-video fare from years past. It is telling that the best effect in the film is the digital interface one of the characters uses to enter commands into a computer.

But The Complex is not an effects film. It is much more a “bottle” film, with the majority of the action taking place on one (rather undefined) set. After a few opening scenes on a war-torn beach (soundstage) and a board room (soundstage), the plot quickly moves to an underground bunker – where things begin to drag. There are only so many video calls between characters you can watch without your eyes rolling into the back of your head.

What Is The Complex About?

Dr. Amy Tenant is a research scientist working for a major pharmaceutical company. With a pending mission to Mars being floated (this feels like the near future), Tenant is working on nanotech-enhanced stem cells – which she feels will revolutionise medicine and make the trip to Mars much safer and more sustainable.

Things go awry, and Tenant winds up locked in The Complex, her company’s research laboratory, buried far beneath the earth. The Complex is protected from outside forces by a vacuum chamber, a series of impenetrable walls, and a firewall (literally). The reason for the protection? Amy Tenant’s nanotech is so dangerous that these draconian security measures are needed to keep the stem cells in, and the competition out.

Tenant is not alone in her lockdown. Trapped with her are her duplicitous (but secretly sweet) ex-boyfriend, a couple of generic scientist types, and a victim/terrorist locked in an airtight hospital chamber. Someone has loosed the nanites from containment, and it is up to Tenant and friends to solve the mystery and escape the chamber. Oh yeah, did I mention that baddies are outside trying to break in to kill everyone? That’s a thing.

The first time we played through The Complex (it was our family activity during a long lockdown evening earlier this month), it was entertaining enough. The plot plodded along, and the woman in the isolation chamber gets off a few good one-liners. It was a hoot, in a so-bad-its-good sort of way.

Choices pop up frequently on the screen with a timer counting down. If you don’t respond on time, The Complex simply chooses for you. It might be an interesting experiment to start the game and simply not touch the controller again, just to see what happens.

Anyhow, my family took turns yelling out what we wanted the characters to do, which is a fun way to play these interactive films. But about halfway through The Complex, I got a sinking feeling that no matter what I did, most of the film was going to play out exactly the same. And it turns out that I was correct.

For An Interactive Film, There Are Very Few Variations

The Complex provides a nice mechanic that allows the player to jam the R1 button on subsequent plays to skip scenes that they have already seen. My first playthrough of The Complex took about 100 minutes (give or take – we stopped to make popcorn).

Our second playthrough – where we purposely chose the exact opposite of what we chose the first time – clocked in at around 18 minutes. And a lot of that was made up of repeating scenes that the game wouldn’t let me skip for some reason. A stunning amount of this interactive film plays out exactly the same way every time you play it.

Rather than picturing The Complex as a pine tree – with branches all the way down the trunk, leading you in unexpected directions, it is much better to think of The Complex as a palm tree – one long, straight trunk with some plot leaves at the end that jut out in every direction. Sure, you can take a side trip here or there to see a few new scenes, but The Complex rams you right back into its primary plot very quickly. Choose your own adventure, this ain’t.

Which makes it amusing that the endings you receive are so wildly different. Some of them are so different from the others, in fact, that they feel absolutely unearned – with no connection back to the primary plot. The story just takes sudden, jarring turns that feel arbitrary.

At first, I thought that the main performance in The Complex was a bit flat, but I eventually realised that the primary actress was portraying a blank slate on purpose – so when the game spiralled one way or the other at the end, the player would never think that her behaviour was out of character. She had no character to begin with.

A few minor mechanics, added into the pause menu, display some personality and relationship statuses that change, depending on the choices you make during the film. But since you don’t know which choices impact which stats, this all feels a bit nonsensical. Why does that one like us 83%, but the other one hates us with 17%. Who knows?

Last year’s Erica set a gold standard for games of this nature, offering the player a variety of interesting ways to interact with the film and a sense of atmosphere that masked some of its budgetary constraints. And Nexflix’ Black Mirror: Bandersnatch showed how a story can go spinning off in different directions at the player’s whim. Compared to these two works, The Complex feels linear – which is likely the last feeling that the makers of this game wanted to convey.

The Complex is now available on the PlayStation Store.

The Complex feels like a moderately entertaining super-low budget science fiction film – the first time. After that, it becomes apparent that the “interactive” part of this interactive film is just fluff, until the very end. At that point, the game slams you into an ending that feels a bit unearned. The Complex is a fun enough way to spend an evening with family or friends, but don’t expect any longevity out of it.